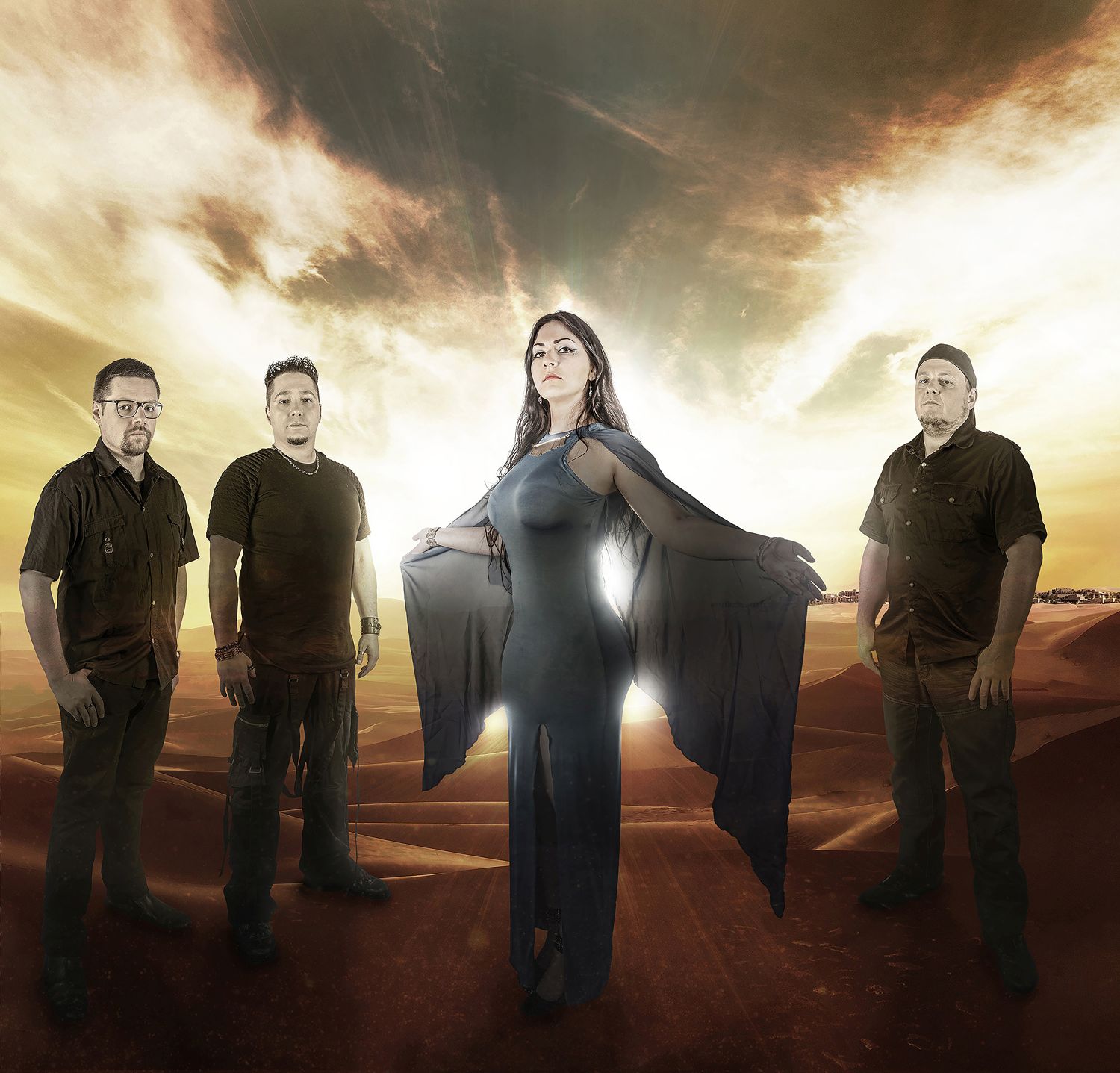 Led by vocalist Tamara Amedova alongside guitarist Manuel Buhl, drummer Gerhard Spanner, and bass player Tim Zahn, Germany’s VISIONATICA first entered the symphonic metal scene in 2016 with their debut album ‘Force Of Luna’. Now with ‘Enigma Fire’ they will prove that VISIONATICA are not simply resting on their laurels, as they are fully prepared and intent on taking things to the next level. HeadBangers LifeStyle’s Ron Willemsen contacted the band for an update. 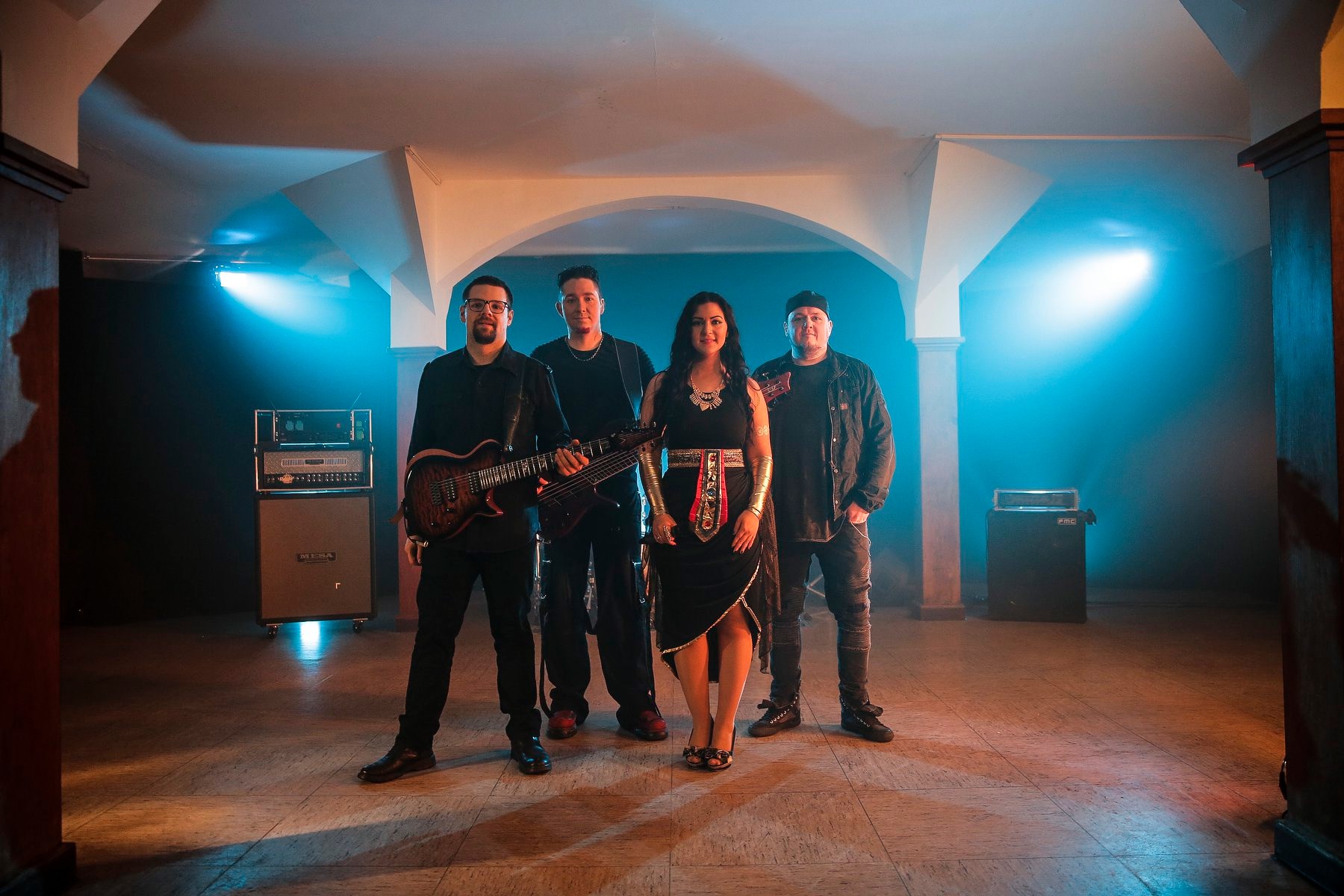 Videoshoot ,,The Pharaoh”   Photo: Visionatica Facebook
When and where did you guys meet?
Manu: ,,We were formed in 2013. First our vocalist Tamara and me got to know each other via an online portal and immediately realized that we had the same musical ideas. Then, after a relatively short time, our drummer Gerhard joined the band, until finally, after some line-up changes on bass, our current bass player Tim joined us at the end of 2017.’’
When you started the band in 2013, who were your influences and what was your goal?
Manu: ,,We already had the same influences back then. Of course we also like to listen to bands such as Nightwish, Delain, Sirenia or Within Temptation. Of course, all of this flows into our songs.’’ 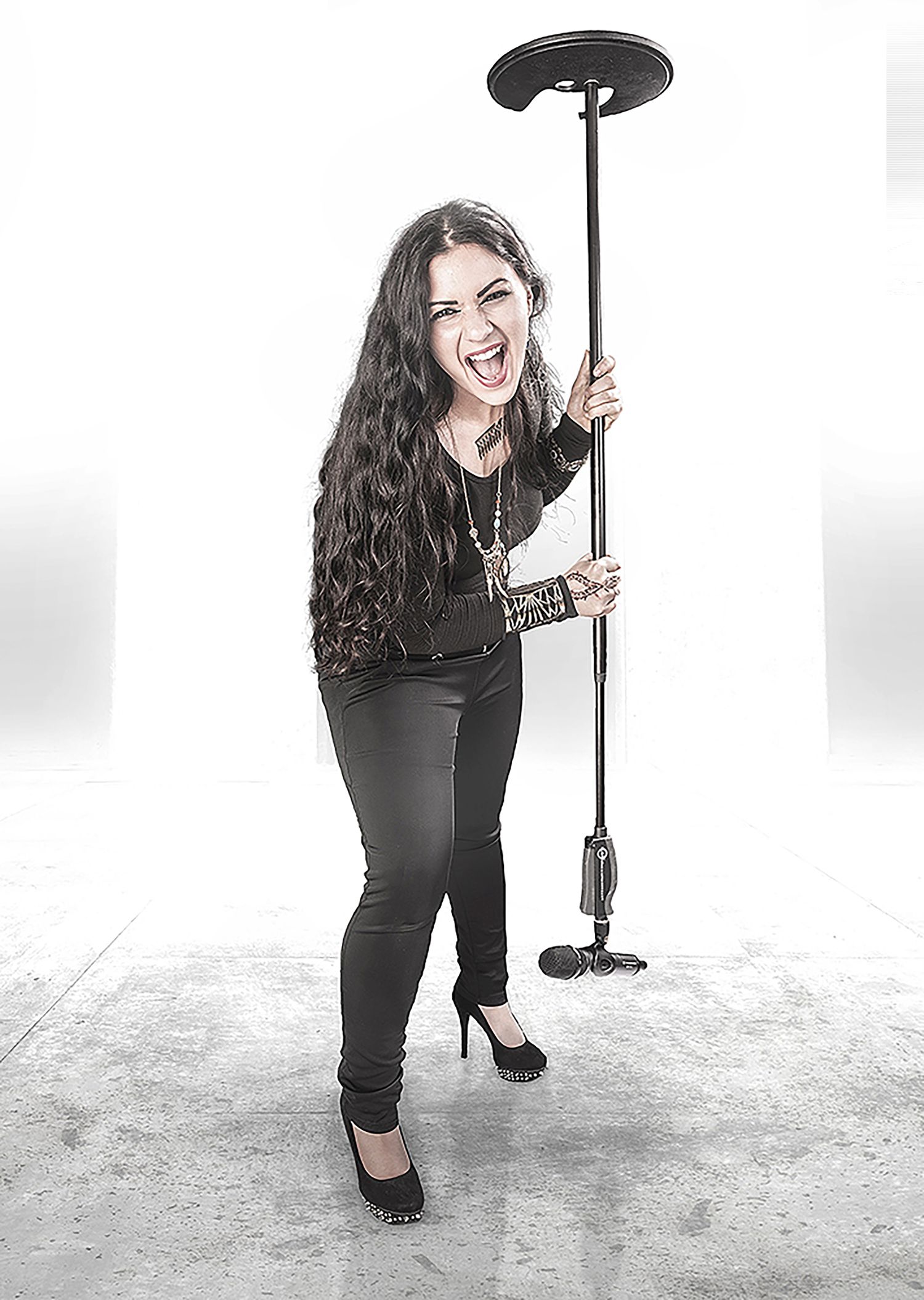 Tamara
What is the idea behind the band name Visionatica?
Manu: ,,When making music you can often connect with visions. Especially in songwriting you often have a good idea how the song should sound at the end. And that’s exactly what our name is all about.’’
In 2016 you released your debut album ‘Force Of Luna’ you continued on that path with ‘Enigma Fire’. Was it easy to find a style and/or direction that suited you well?
Manu: ,,Well, we were/are not searching explicit for a certain style… We give our best to develop our own style of metal. On one hand there are our influences on the other are our roots and experiences. Our lead singer Tamara has Macedonian roots, so there are natural oriental and Balkan influences. After the first album our self-confidence and experience made a big step forward, so our music developed more in our own way and became more unique.’’
Tamara: ,,I bring in my music what I like and what touches my heart and that is what you can hear in our music. It was important to us that more energy and pressure be built up and that the album got an unmistakable, own sound.’’
What makes Visionatica different from other female fronted symphonic metal bands?
Manu: ,,Definitely, of course, the Oriental and Balkan influences already mentioned, which is the unique difference to other bands of the same genre.‘‘ 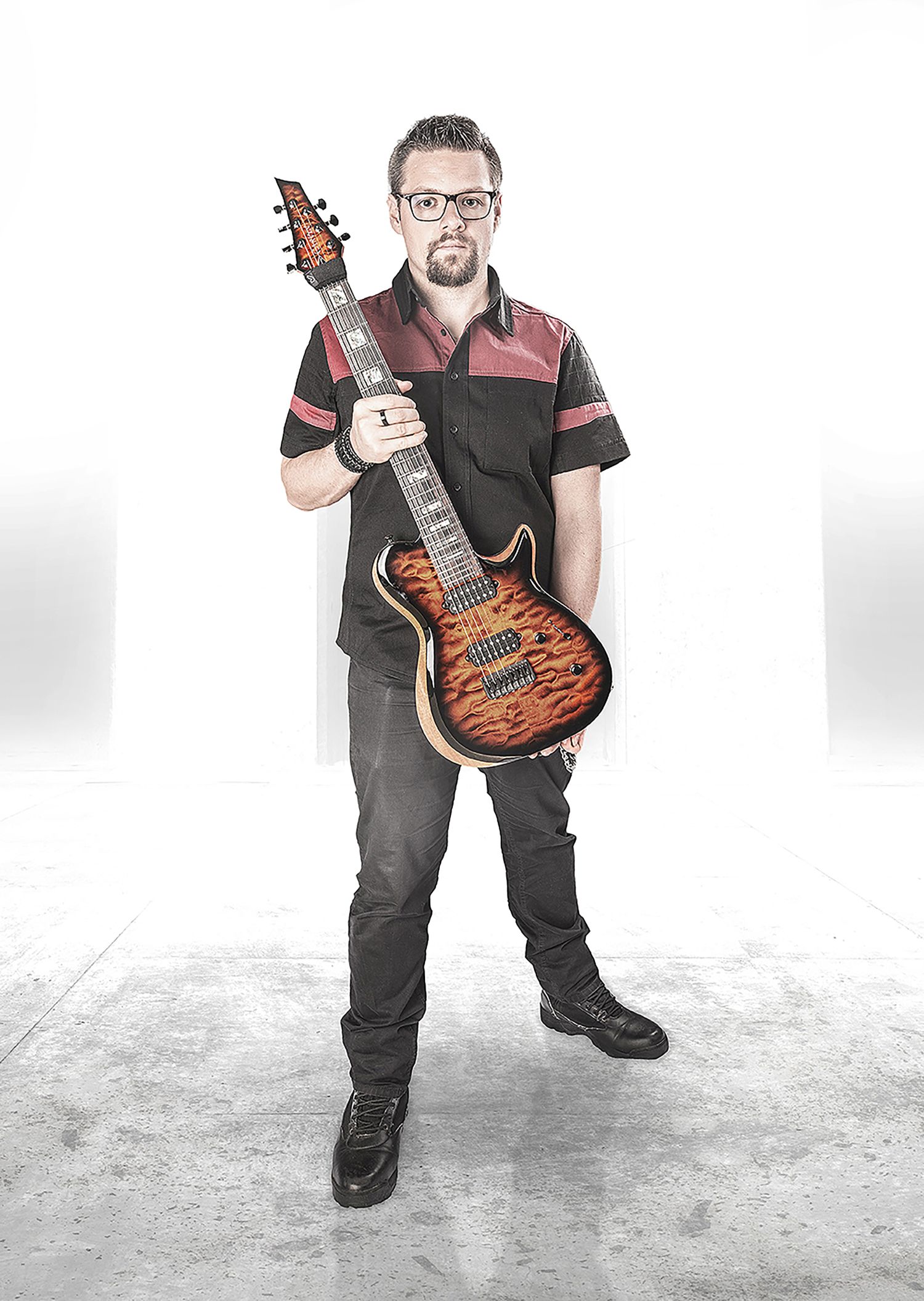 Manuel
Is there a concept or overall theme to be found on `Enigma Fire’? A story to be told?
Tim: ,,We are not a concept band. We are just music-lovers who want to develop songs that we personally love to hear. ‘Enigma Fire’ is not a concept album, every song tells its own story.’’ 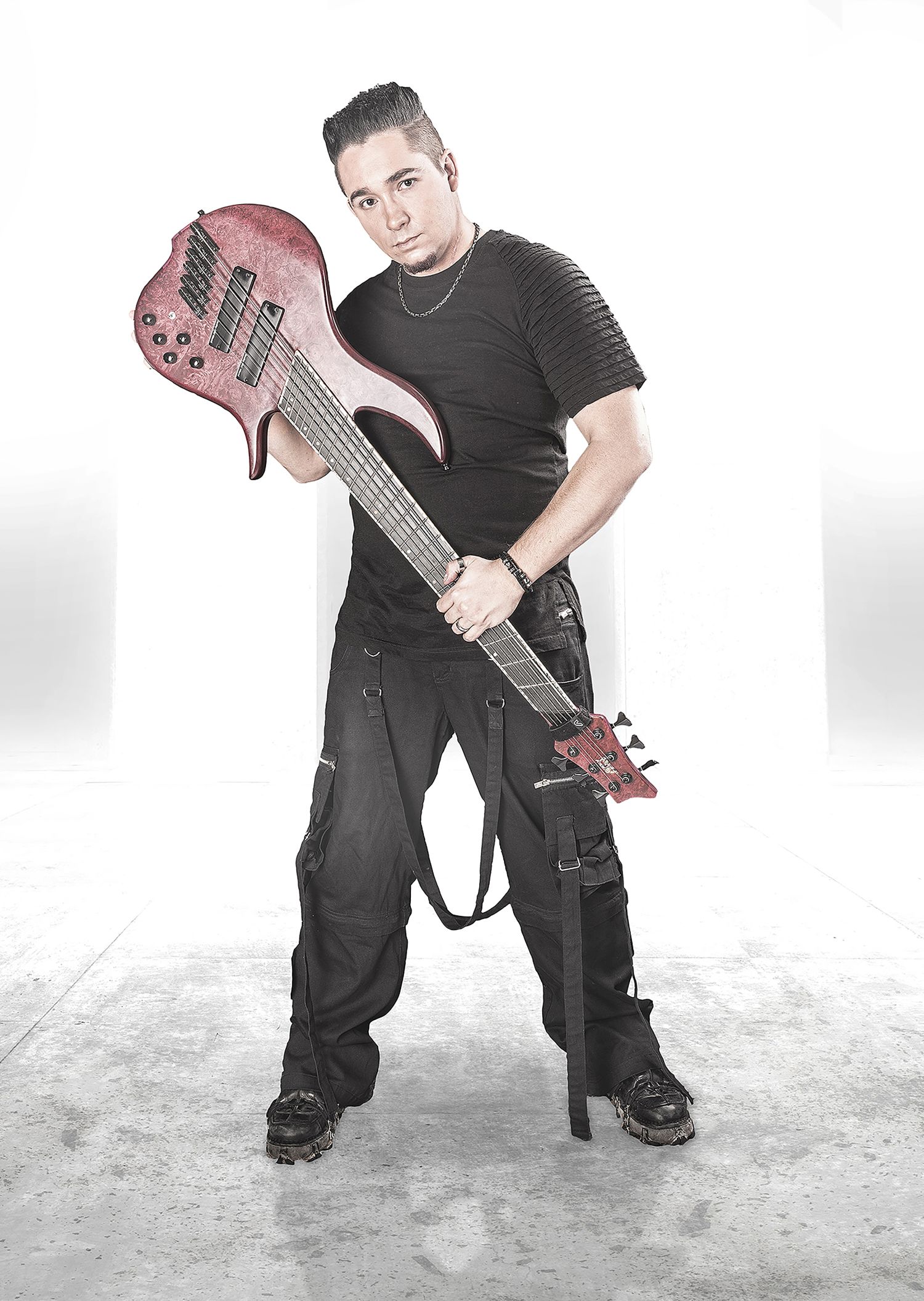 Tim
Where do you draw your inspiration from for the lyrics?
Tamara: ,,There was a lot of inspiration for me. The album is about war, but also peace and the mystery of the creation of life. For example: ,,The Pharaoh” is about the question of being alone in the universe. I like watching documentaries about such topics. Egypt is also a genre, which interests and fascinates me. I love the pyramids and their secrets. In pre-astronautics, it is said that aliens visited the Earth long ago and they built the pyramids, so that humanity was once technically more advanced than today, only then they destroyed themselves and were catapulted back to the Middle Ages. Today, someone only has to imagine what it would be like if suddenly there was no electricity left … Another assumption is that we were brought to earth by extraterrestrials as a punishment because humanity was wrong. That may sound ridiculous to many, I cannot believe many things, but we know absolutely nothing about this infinite universe. Where do we take this arrogance to believe that we are the smartest, the culmination of creation, and know everything?! Maybe we think we know a lot, but we don’t. I think the more questions you ask yourself, the more interesting and exciting this topic becomes.
In the song ,,To The Fallen Roma”, I pay tribute to the Roma and Sinti who died in Auschwitz as I am half Roma. Most people have a completely wrong and weak image of these people. I wanted to dissolve this narrow-minded, hated and icy image of this ethnic group with the song. It is time to avoid getting manipulated by a picture that others have set before us. There are others. Other angles, other eyes that see something different. When I heard a heartbreaking story about a survivor, I came up with the idea of writing a song about it. That idea did not let me go and then I thought it was time to tell my point of view to the public.
Of course the song ,,Fear” is, as banal as it sounds, about fear. The fear that life could be over in a hurry, no matter what … an accident, a crime, or something else. It’s also about the fear of what comes afterwards. The song should also say: we must not let ourselves be determined by fear and control, because we have our fate in our own hands. And at some point we have to face our fears.
,,Roxana The Great” – I think I will write about a strong woman in every one of our upcoming albums. After ,,Lilith’’, I chose Roxana The Great, the first wife of the famous king of Macedonia – where my family comes from. She was a dancer and very close to Alexander the Great.’’ 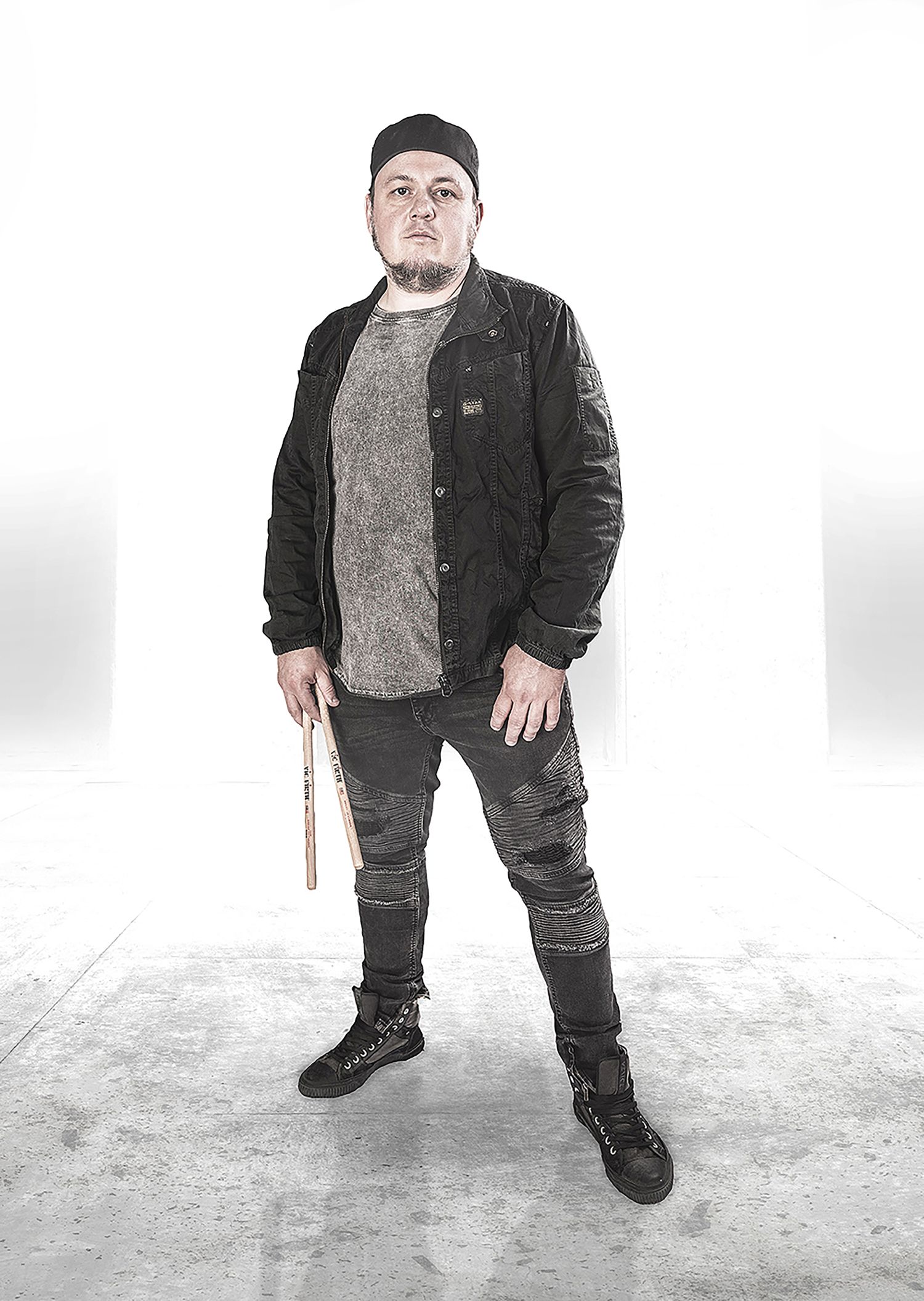 Gerhard
Can you tell me in short about the writing process?
Manu: ,,The main songwriters are Tamara and me. We meet and collect the developed ideas. Then the other instruments are added step by step. Tamara is exclusively responsible for the lyrics.‘‘
Which song on the album stands out in your opinion and why?
Manu: ,,Of course we love all the songs on our album but if I want to highlight one, it’s certainly our single ,,The Pharaoh”.  This song presents us perfectly. You can find all the elements here.’’
Tamara: ,,In my opinion, ,,Fear” and ,,Secrets Of The Ancestors”, as the album is about war, but also about peace. At the moment I am also involved in genealogy research and the album is about the obscenities of the past. But I actually think that every song describes the album well and fits all the themes I wanted to address in the album.’’
On this album you bring in various guest musicians. How do you pick those?
Manu: ,,The guest musicians are all friends of us, with whom we enjoy working together very much. Some of them like Michael Liewald of Winterstorm have already been heard on our debut album.’’
Tamara: My father is from Macedonia and that’s why I know this Oriental Balkan music. I love this music and I listen to it all the time. And this time I really wanted to have it included. My dad and my uncle sang along with the song: ,,To The Fallen Roma”. He also sings the so-called maqam singing, that is this typical oriental-sounding voice.’ 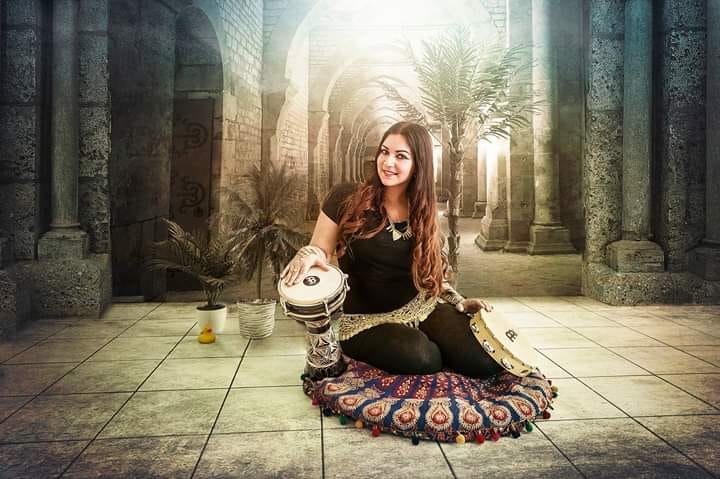 Tamara   Photo: Visionatica Facebook
‘Enigma Fire’ is your debut album on Frontiers. How did that happen?
Tim: ,,Nowadays it is very difficult to get such a contract. Together with our management we were looking for a strong partner and finally found the label we had hoped for with Frontiers Music Srl. We are very proud of that.’’
The fact that you are one of many bands on Frontiers doesn’t scare you off? They often say it is better to be a big fish in a small pond than a small fish in a big pond.
Manu: ,,No, that’s too easy. We are very well supported and treated like the other artists.’’
There are 8 songs on the album (9 if you count the intro) but the total playing time is pretty short. In a way that was the same with ‘Force Of Luna’ which lasted even shorter. Have you done that on purpose? If so, why?
Manu: ,,We decided on a shorter playing time because we wanted each song on our album to be special and unique. And to be honest, we like to deliver killers, not fillers. 😉 So I would say, yes there are not many songs on the album, but I swear you don’t have to skip a single song.’’
How long did it take you from start to finish until the album was ready?
Manu: ,,It took many months until all the demos were finally turned into the finished and polished songs. The complete production in the studio took about six months.’’
The core of the band is pretty basic: singer, drummer, bass player and guitarist, still there are a lot of keyboards, orchestration and extra vocals on the album. How will you solve that on stage?
Manu: ,,We have been playing in this constellation for several years now and actually see no need to change anything, as we all understand each other very well. Nowadays it’s not uncommon to use a playback for some elements like orchestra.’’
Tim: ,,Ok, but indeed, like every musician in this genre we are dreaming to play with a real orchestra. And of course, guest-musicians are a great pleasure on stage… Hey, but we are a small band today and a travel-party of four persons is easy to move and flexible. Hopefully one day the big breakthrough will come, and we can fulfill some dreams.’’ 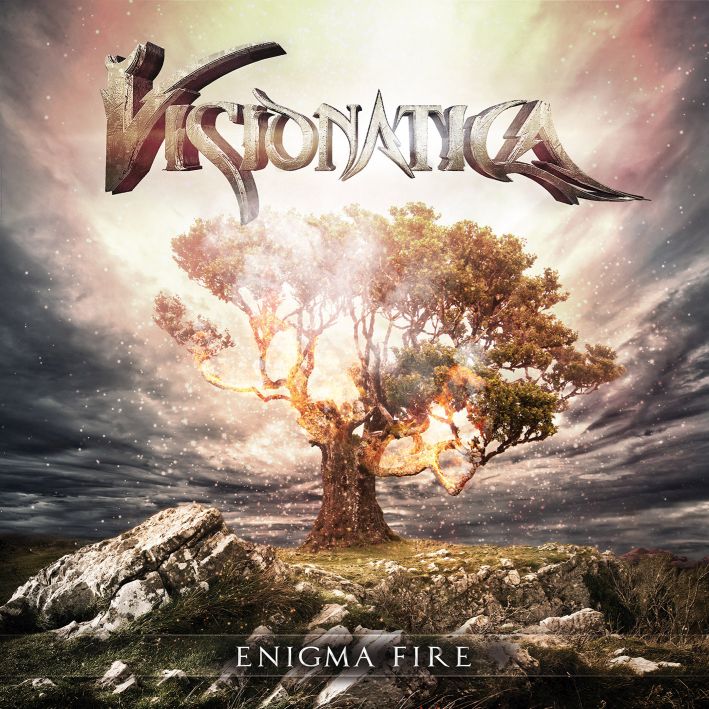 What can people expect when they come to see Visionatica live?
Tim: ,,We try to present our songs live as much as possible as they can be heard on the album. Bombastic sounds and a great show await all visitors of our concerts.’’
What are the plans for the immediate future? Any tours planned already? If so, when and with whom?
Manu: ,,Right now we are checking different tour options and hope to tour a lot. We are always looking forward to the future and want to inspire many different countries with our music live.’’
Tamara: ,,I already have a lot of inspiring ideas for the next album. So you can look forward to even more power, action and catchy tunes.’’
—
All photos by Michael Liewald except when indicated otherwise
Visionatica Facebook here
Visionatica Website here
Visionatica Instagram here
Visionatica Twitter here