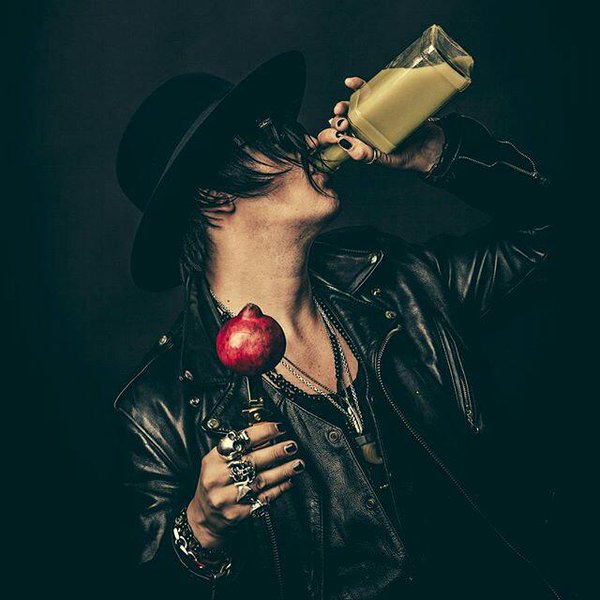 Since the early days of rock ‘n roll tons of bands and musicians tried to put their personal stamp on the history of music, with a certain stage presence, image or particular look. Helsinki’s most famous vampires, The 69 Eyes, certainly did it their way. In the late eighties (1989) they started as a glam metal, sleaze rock influenced band but soon after they embraced the musical vibes of the more dark rock genre and so they invented their own style named `goth ‘n roll’. The 69 Eyes became extremely popular especially in their own country Finland and frontman Jyrki 69 appeared as the mysterious but always sharp dressed looking rocker who wasn’t afraid to use make-up too. HBLS talks with Jyrki 69 about his make-up behaviour, cool clothing, his idols, travelling, becoming a writer and the way he likes to live his life in 2016 and the future. 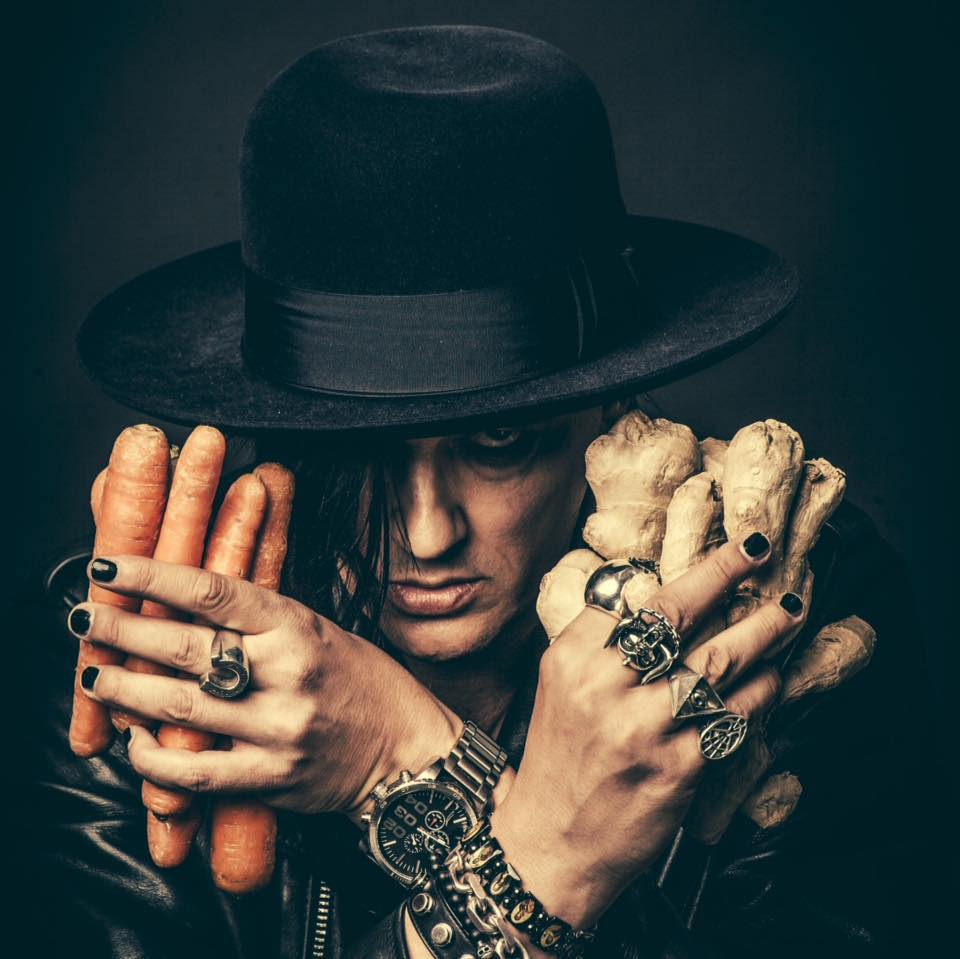 Who is your all time favourite style icon or role model?
,,Elvis Presley is my number one! But I guess that counts for everybody in the world. I also admire all the outfits Jimi Hendrix ever had. They were timeless and even today they still are. They make perfect sense. Every time I see a documentary or video of Jimi Hendrix, I just keep wondering; all of a sudden this guy turned out to be Jimi Hendrix! But when did that exactly happen? And how come he always had the coolest clothing on the planet? Where did he get them? What the hell!!!’’

What make-up and beauty products do you use as an artist?
,,It has changed a lot with my age actually. It is kind of funny me being older now, I should use more make-up then I used about fifteen years ago. But it is the other way around. Back then I always used foundation when I definitely didn’t need it at all. Now I might even need to use more foundation, but I don’t use it anymore. These days I only use some eyeliner because whenever you are on stage the eyes are the most important and you make them more visible with black eyeliner. It is also part of the culture, because Elvis used eyeliner, Little Richard did it. They all did! I also use black nail polish. It is a little message like:`hey I am a rebel!’ And it is even more fun and mystic when you become an older rocker to wear black nail polish and black eyeliner. I don’t think it is shocking at all. When a guy uses that it shows he is serious, he is real and he has stories to tell, so you better listen!’’

Did you ever have a limit in using make-up?
,,Being a glam rocker, a goth, a rock ‘n roll guy, I always thought it was a masculine thing to wear make-up. Like I said, Elvis and Little Richard and even the guys from New York Dolls were very masculine too with make-up on. They weren’t `gay-ish’ at all. They were like street guys and as tough as fuck. They dressed sharp and they looked different so they were even more evil and harder. It is the same with Keith Richards, he is a badass motherfucker and far away of being a wimp. So I always thought that wearing make-up made me more masculine than feminine. That has always been my message. In my early twenties I also had really long hair and the talk of the town was I had the longest hair in Helsinki. It was always very hard to unzip me because my hair was always everywhere [laughing]. When I look at those pictures now I think it is complete insane but back then it was something I wanted to try. I just wanted to see how long my hair would grow. I don’t know if it was a scream for help or just a cool thing to do but it was extreme and I won’t do that ever again. It just went too far! It is weird sometimes to see pictures of myself from years ago on the Internet, because I know how I look now and how I looked recently. But I don’t exactly remember how I looked ten or twenty years ago. When I play with The 69 Eyes in places where we only play once a decade or for the first time, I see fans who are dressed up like me from certain periods in my career. My look from different records, my different haircuts and my skeleton jacket look, so I see my 1995, my 2000 and my 2005 look in the audience. It is just very crazy to see all these different `periods inspired by me guys’ in the audience.’’ 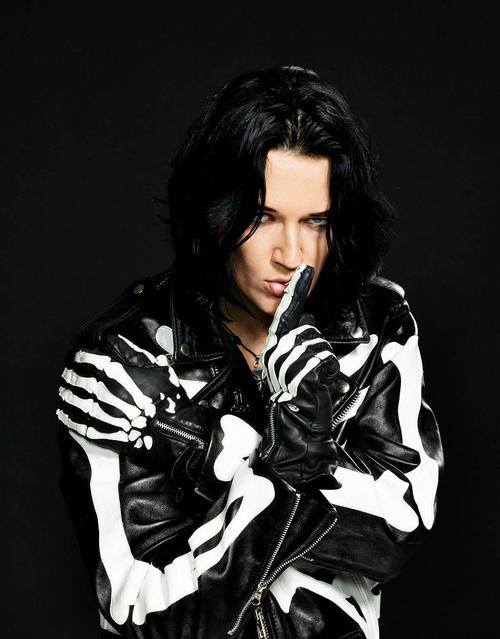 What is your solution for a bad hair day?
,,I always wear different kind of rock ‘n roll hats. I like that. They make my hair even more interesting.’’

What items do we find mainly in your wardrobe? Anything in particular you spend a lot of money on?
,,Leather, a lot of different leather jackets. And Black jeans and cowboy boots. Once you get the best items that always look cool and are for eternity, you don’t need anything else. Like leather jackets from Schott NYC. They have all these special classic rock ‘n roll leather jackets that for instance The Ramones, Elvis and all these guys wore, but also the one Marlon Brando had in `The Wylde One’. I can say I have pretty much all the things I have always wanted. Of course I could buy a couple of new cowboy or rock ‘n roll boots but actually there is nothing I am missing or want to spend endless money on.’’

Is there a difference between Jyrki 69 the artist and Jyrki 69 in private circumstances?
,,My private is my private, but I am really the same person on and off stage, I don’t play a certain role as an artist. But I am not sleeping with my leather pants on, well most of the nights… And I don’t jog in my leather pants either. If there is anything under the leather pants…. ? Well, that is private [laughing].”

Do you consider yourself a sex symbol?
,,I don’t know? I haven’t thought about it for a while now. And actually it doesn’t matter anymore. It was an exciting thought ten years ago, but now, seriously I have no idea.’’ 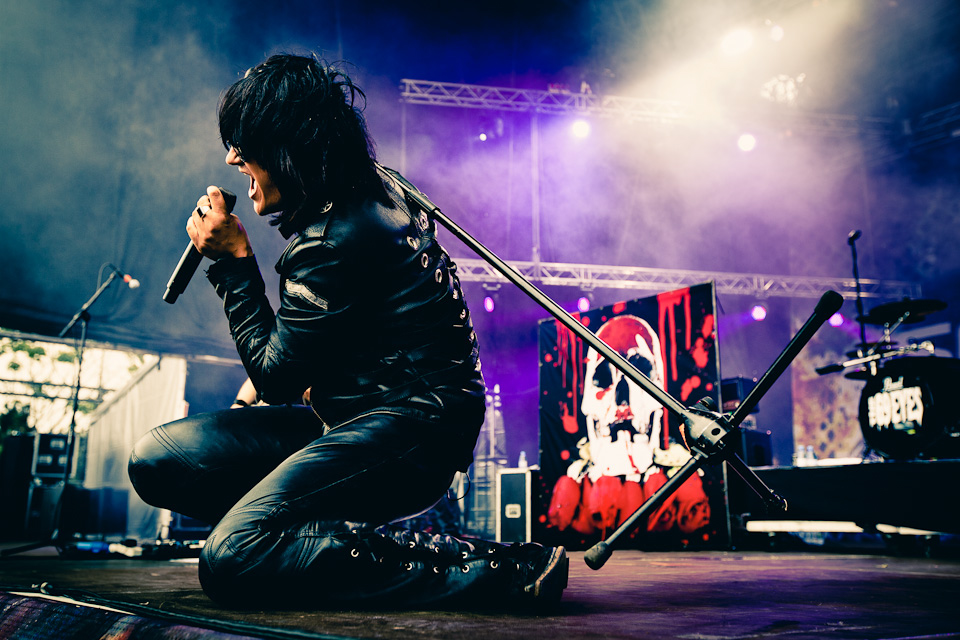 Is there anything you collect, or do you have a special interest besides music?
,,I actually came to the point that I try to get rid of a lot of stuff [laughing]. I have been going to the top with everything, now it is time to go into the other direction. Just like we go back to square one with our new album `Universal Monsters’. I still buy a lot of books though and I already have a lot of books, because I am still very much interested in a lot of things and about what happens in the world. So I buy a lot of books but I recently have also learned to read books again. I like to read books about different religions, spirituality but also about science, history and different topics in general. When it comes to novels I like American Beat authors. And there is this really cool young Norwegian author named Karl Ove Knausgård who wrote six fantastic books so far. I actually got a book deal myself, so at the moment I am writing a book about my own adventures. That is something that really excites me. I still travel around the world to get new inspiration but my book will be written in Beat style. I just started and I am not even halfway so the release can be expected in a year.’’

What type of traveller are you?
,,I am also trying to change that, because I am kind of a luxurious traveller. Wherever I go I check out the hotels where The Rolling Stones have stayed because that always qualifies a hotel. I have done this for a long time but now I have seen it all. I am considering becoming a backpacker at some point. Yeah, that would be the next interesting thing. I have already seen a couple of exciting ways to do that.’’

What do you always bring on tour?
,,Good Ibuprofen pills to kill the headache the next morning. You have to eat it before you go to sleep so you don’t wake up with a headache and you can start all over again. That is the most important thing.’’

How does your perfect day off looks like?
,,Reading a book. It can be anywhere but to make it perfect it would be by the sea or the pool, drinking from a coconut with a straw. Far away from all intelligent devices, so no phone, computer, TV or I-pad.’’

Best decision you ever made in your life?
,,To become a writer, which I have recently decided. Whenever I am going to retire from music I will continue writing. I am really excited about having this book deal. Writing for me is the next step. I have been in a rock band for over twenty-five years so I want to do something else the next twenty-five years. It is time to move to a next level.’’ 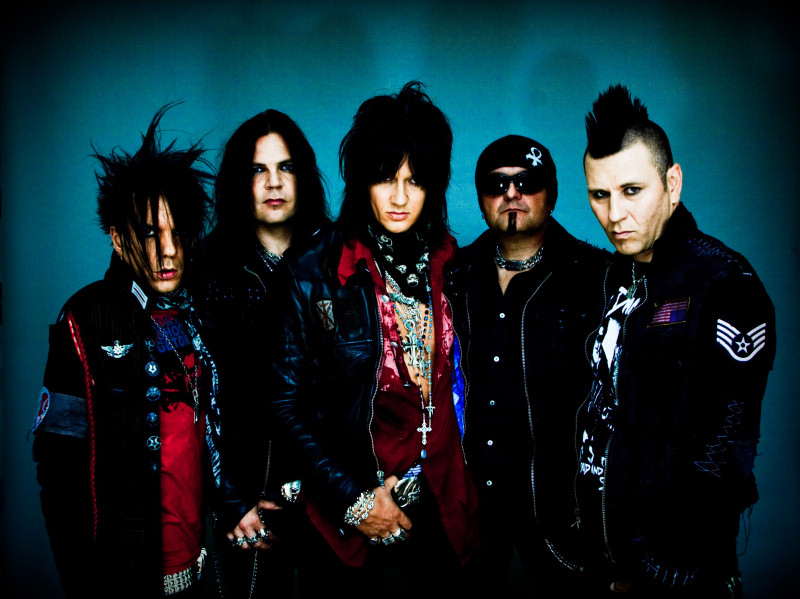 What still gives you an adrenaline rush as an artist?
,,I always have so much energy, I really have to burn it somehow. When we don’t play I go out jogging because otherwise I jump around all the time. I guess I was born with speed in my blood or something and that never goes away, not even with the age. Sometimes it can be a disturbing thing, well at least for other people, because I am a little bit faster than the others. These days I am very interested in the spiritual side of life. There are interesting ways to control your mind through meditation and also these adrenaline rushes that are only in your head, for instance when you get upset by something. That really interests me. It is not about the control but noticing things around you and fully enjoying them. But as an artist I still get an adrenaline rush of seeing a beautiful girl in the audience. This sounds like some guy who is in his early twenties, but it is exciting for me, it has always been. That is the reason Mick Jagger is still out there [laughing].’’

What is your motto in life?
,,Be here now! I am really happy and thrilled I have the chance to discover this motto and finally understanding it. It takes a while and hopefully everybody discovers it at some point in life.’’
—
Header photo by Ville Akseli Juurikkala
Follow Jyrki 69 on The 69 Eyes Facebook and The 69 Eyes website.