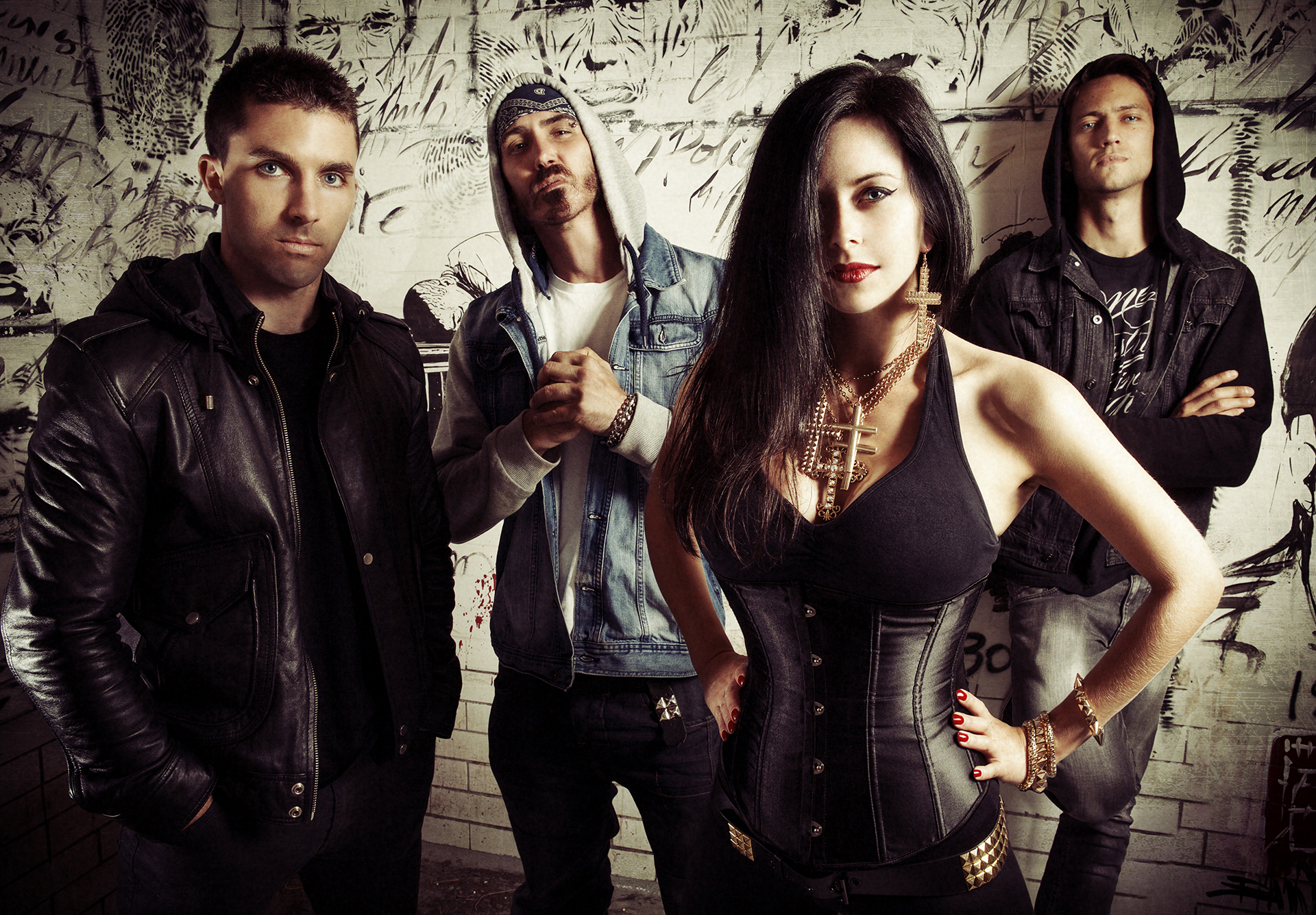 Sanguine is a 4-piece alternative metal band from the UK and is about to release its debut full-length cd `Black Sheep’ (29th January 2016). Mixing rock, punk and metal but also showing a sensitive side, typifies the band and distinguish them from many other female fronted metal bands out there. But it is singer Tarin Kerrey who spices up `Black Sheep’ with the element of surprise by switching from melodic singing easily to high-pitched almost howling screams. Not only does Tarin knows what she is aiming for as a singer, she also knows what she wants when it comes to beauty and lifestyle. 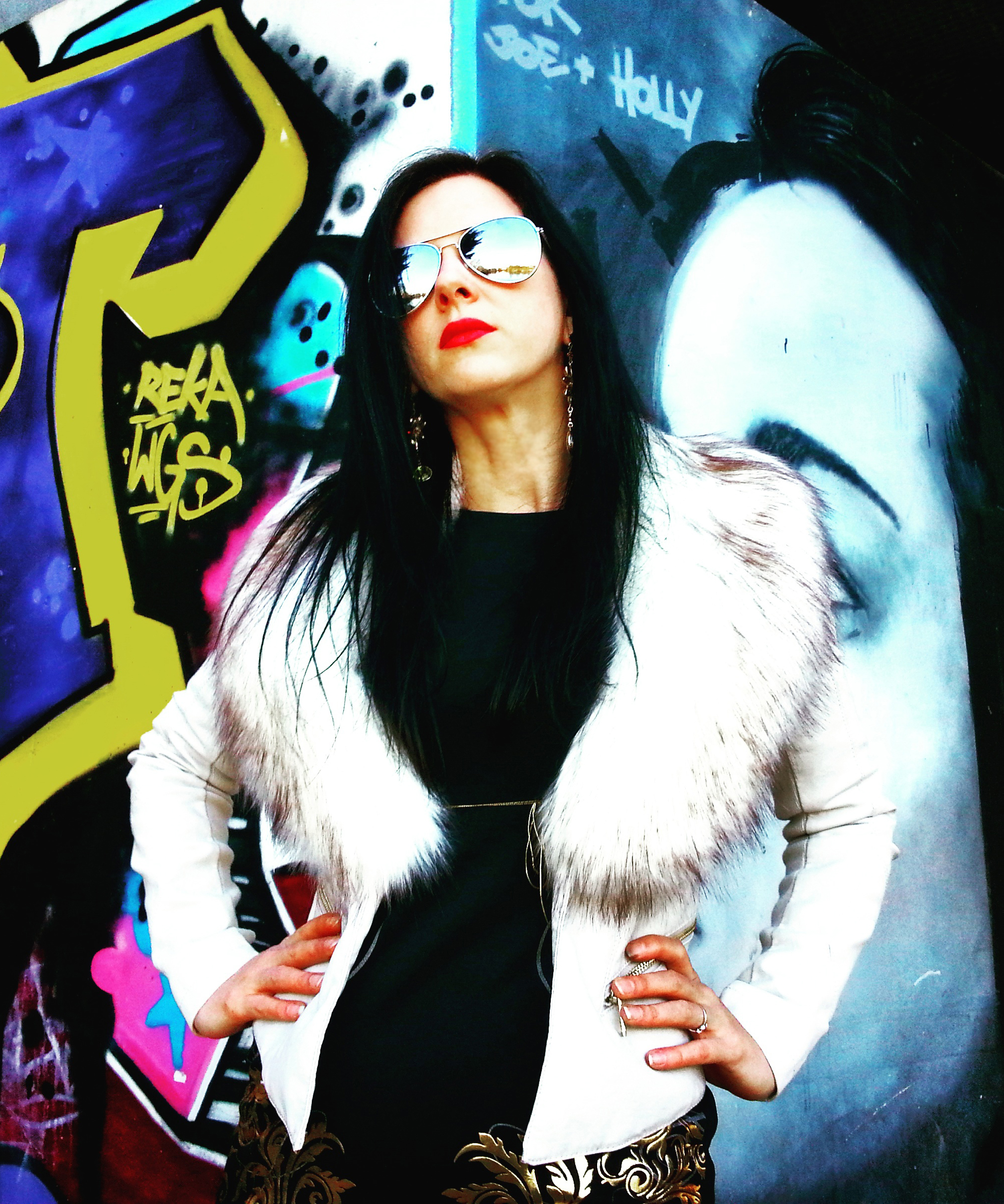 Are you a make-up and/or fashion junkie?
,,Not really, I love art and so my interest in make-up and fashion goes hand in hand with art. I don’t follow many trends on the high street, I don’t know the names of many labels but I do like rock chick fashion. I generally follow the darker side of fashion. Black dominates my wardrobe.’’

How would you describe your make-up and (stage) clothing style and how did it develop over the years?
,,I’ve always liked the old 1950’s pin-up girls so I took inspiration from the pin-up look when it comes to make-up. For example I always wear eyeliner and red lipstick, that’s signature to me. In terms of clothing styles I love using a mixture of layers, belts and jewellery to match my outfit. Accessories are just as important as the clothes! To top it off I mainly wear boots, I feel like they represent my `war uniform’ when I step on stage. I’m ready to do battle when I am in my boots! I think that you have to work with what you’ve got, find your assets and work on bringing attention to those assets. When I started out I was always working on a tight budget and so I spend a lot of time finding clothing items on the cheap or in second hand shops and tailoring them so that they fit me perfectly, or adding in extra detail to plain clothes. Remember that you can make your own outfits, don’t just rely on what is for sale on the high street. Adapt, shop around, and find items in stores you don’t normally buy in. You might surprise yourself.’’

Have you found your own visual identity or are you still looking for that?
,,I’m definitely not basing my look on anyone in particular, so I suppose I’ve found my own visual identity. I suppose I would describe my look somewhere between Tomb Raider, Kate Moss and a pin-up girl! I’m not a materialistic person but I do have expensive taste. I’m always seeing clothing that I can’t afford, so I try to emulate fashion I’ve seen by shopping around and making adjustments to outfits to get that expensive look. Get that sowing machine out, start gluing those diamantes!’’ Who is (are) your style icon/role model when it comes to beauty and fashion?
,,I love Alexander McQueen, the dark theatre was always impressive but you couldn’t wear it. But he had ideas, his fashion was art! In terms of women I’ve always loved Dita Von Teese, she pretty much sums up my love of pin-up girls.’’

What are your favourite beauty products? And which ones can’t you absolutely live without?
,,I can’t live without my red lipstick. I mean really red, most reds are either too pink or too orange. I shop around for colours to ensure that I find a true red lipstick. My GHD hair straighteners are also a must have! They are as amazing as everyone makes them out to be. These babies can keep your hair straight for days so they are worth every penny you spend on them.’’

Best make-up tips you ever got and what are your own best tips!
,,I would be absolutely lost without Lipcoat, it’s a coat that you put over your lipstick so that it stays on. When I’m singing and performing I get pretty hot so it’s really important that I find ways of making my makeup stay on. Lipcoat is the only product I’ve found that truly works. Don’t rely on hairdressers work out hairstyles you can do yourself on the road. I recommend that every girl with longer hair works out a way to style their hair up and down. The reason I say this is because long hair does not always want to be down. Sometimes it won’t behave itself! So I recommend that you try out a few up-styles until you find the one that frames your face and make that your “look”. Every longhaired girl should have at least two hairstyles that they can style themselves without any help. Practice your up-style until it becomes second nature. This means that even if you are no where near a hairdresser (like me when I’m on the road) you still look good.’’

Which products are your life saviours after a late night party and how do you deal with a hangover?
,,Sleep!!! Sleep is the best thing you can do to look good. Make sure you sleep as much as you can, your body needs time to restore itself. Eat well; I mainly eat white meat, fish and vegetables. I don’t diet or exclude anything from what I eat but I do count how many carbs I have in a day. Carbs and sugar is definitely the enemy. If you eat well you’ll feel better. In terms of hangovers I’m not a big drinker. It’s not that I won’t enjoy a drink from time-to-time but I rarely drink in the week. I think that alcohol does bad things to your body, it puts on weight and generally lowers your health. So when I do drink I enjoy myself but I’m not someone who will drink every day. When I do overdo it I make sure that I drink vitamin drinks like Berocca. I normally enjoy a glass of orange Berocca, it also turns your wee ultra-yellow so watch out for that!’’

What type of traveller are you when it comes to touring? What are the essentials for you to bring on the road?
,,Being the only girl in the band you have be prepared. No one else is going to bring along a pair of tweezers. So not only do I have to pack for myself but I’m also in-charge of basic first aid: painkillers, plasters and a bunch of safety pins are always in my bag! I basically travel as light as I can with one make-up bag, a small mirror, my GHD straighteners and a travel hairdryer, with a bunch of travel adapters (remember I’m from the UK!). I also bring earplugs and an eye mask because you never know where you’ll end up sleeping and who’s snoring you’ll have to put up with!’’

Being in a band, how do you take care of your voice, also during touring?
,,Sometimes I just know that I’ve pushed my voice pretty hard the night before and I need `vocal rest’, a period of silence without using my voice. But resting your voice can be nearly impossible when you have to do interviews before the next show. Basically the key to looking after your voice is being healthy, generally I carry a bottle of alcohol rub for my hands and I make sure that I use it! Picking up a cold is the worst enemy for my voice!’’

What makes you different in your opinion from other female singers in the metal scene?
,,I don’t know! I’m just me. I’m not trying to be anyone else. I take inspiration from people around me but I never try and copy anyone. I just don’t care what others are doing; I’m very much on my own trip! I think this independence came from the fact that I left home at fifteen so I had to grow up pretty fast. I’m girly but I’m not girly, I’m a paradox. I love girly pink things but I won’t think twice about breaking a nail in order to lift a heavy amp into the van! In terms of singing style I take a lot of influence from Mike Patton from Faith No More with his ability to sing and scream. I like to mix up the styles I sing in, I’m not afraid to scream my head off, but I also enjoy singing. I’m lucky that I have Sanguine as a vessel to do both styles of singing.’’ 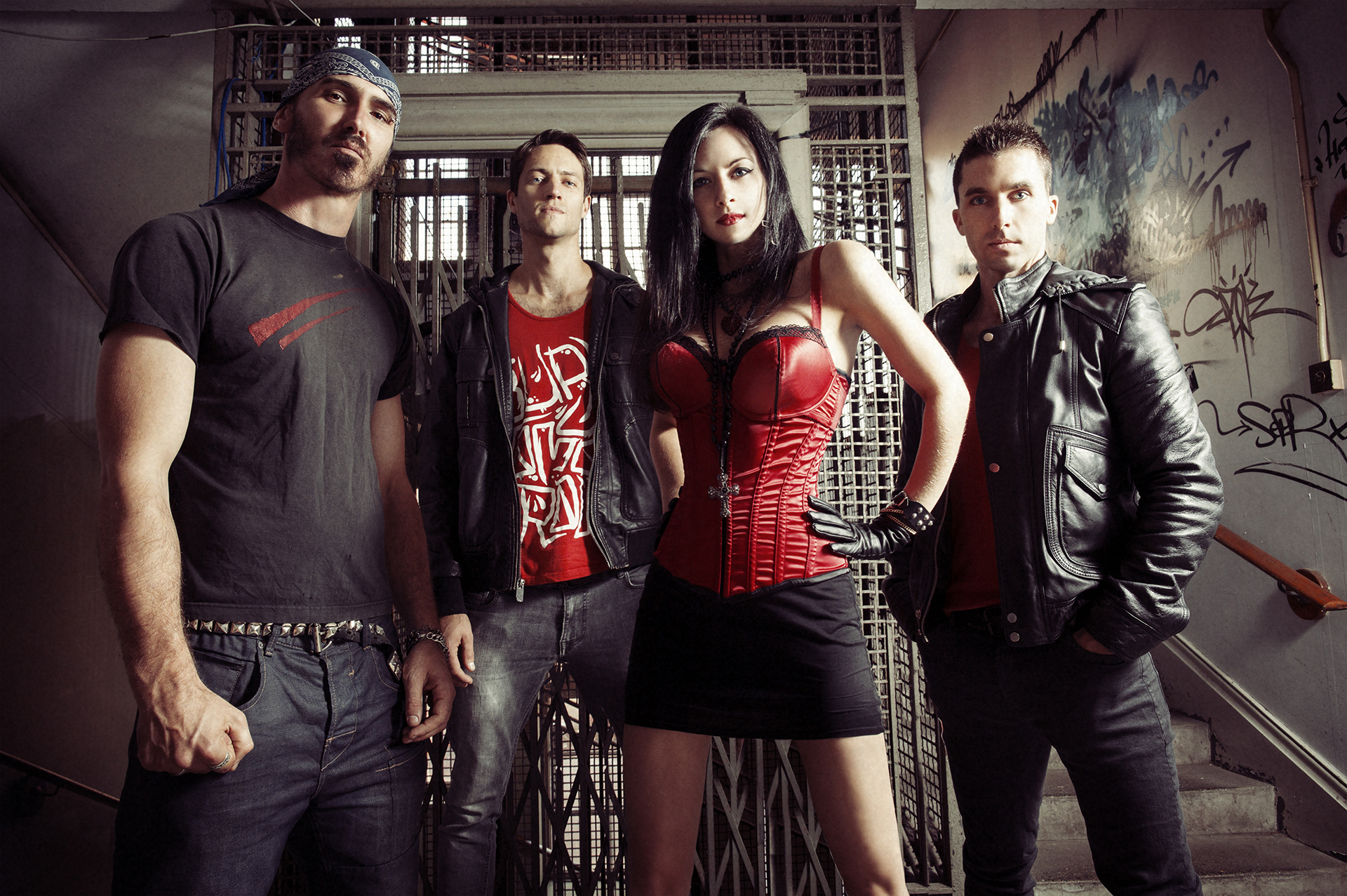 The debut album `Black Sheep’ of your band Sanguine will be released 29th of January 2016. What do you want to say and show with this album?
,,I want to introduce first time listeners `the world of Sanguine’. We worked hard on putting this collection of songs together so that it can be a soundtrack to your life! There is a song for every mood on this album. We’ve always been alternative, somewhere between rock, metal and punk and I’ve always wanted to sing and scream and mix up my styles of delivery. I would absolutely love people to listen to the record in its entirety as there are so many inspirations pulled into the styling of the songs. It even features Jesper Strömblad, former guitarist from In Flames, on two of the tracks (,,Empty’’ and ,,Breathe Out’’). The album is called `Black Sheep’ because as a band we’ve never really fitted into the industry. We’ve always been labelled as alternative heavy music. I suppose if this album was trying to say anything it says: we don’t fit in, but we don’t care! We are proud to be Black Sheep.’’

What is the most personal song on the album and why?
,,,,Breathe Out’’ is pretty personal. The lyrics are written from my perspective trying to comfort my best friend who was going through some major crap in his life. I felt like I was losing his friendship and I was trying so hard to get him to talk to me, to reconnect with me. So there are some pretty emotional lyrics in that song, still hits a nerve when I listen to it.’’

First thing you did when you heard you had a record deal?
,,We were over the moon! We had travelled to L.A. to play a show and afterwards we bagged our very first record deal with The Leaders Group in Japan. Pretty amazing experience to fly halfway around the world and realise your dream is coming true. The first thing we did was head back to the apartment we were staying in, cracked open some drinks and headed to the hot tub! Pool party! Yep, got to love celebrating L.A. style!’’

What bands/artists are rotating on your IPod or IPhone lately?
,,`Philistine Philosophies’ of SikTh. A brilliant new EP just recently been released. SikTh broke up a while back and now they are back with more insanity! This band are the meaning of true musicianship, amazingly technical but still melodic. Check them out!’’

What are your good intentions for 2016?
,,Travel more, tour this album all over the world in as many countries as possible. `Black Sheep’ is coming out in the UK, Europe and Japan and we are booking in tours right now, so watch this space!’’

What is your motto in life?
,,Be yourself. Follow what’s in your heart. There is no point copying someone else or thinking that you should follow social pressure or profiling in order to be happy. Only you have to live your life so only you know what will make you truly happy. I’ve seen so many people follow paths in life that aren’t their own, that makes them stressed out and miserable. Be yourself, always be yourself.’’ 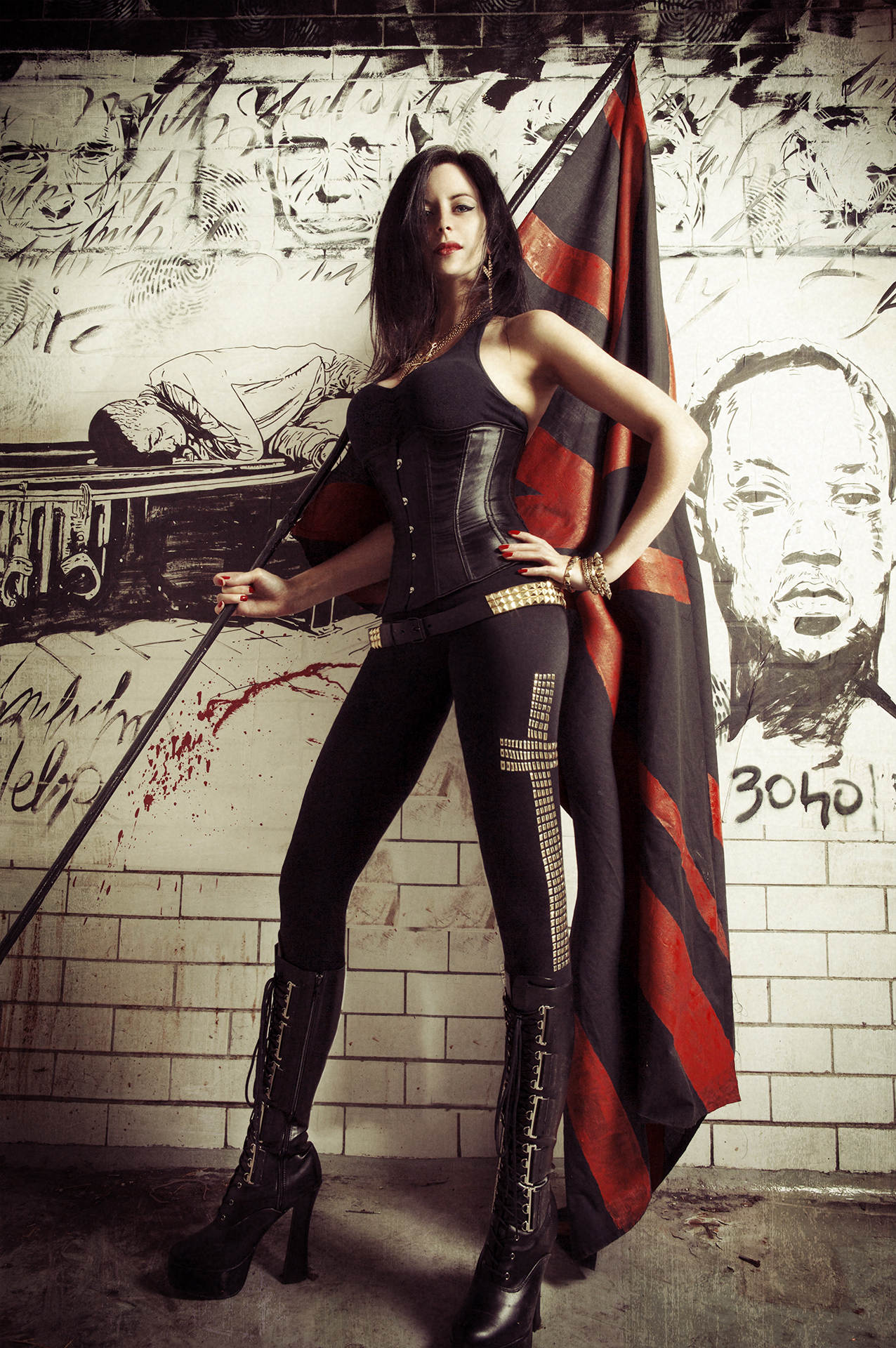