OZZY/BEAZLY By The Brewer’s Art [Baltimore]

Sent to me by a friend in the US who recently came across my Beers & Beverages review section on our pages here at HeadBangers LifeStyle, comes this rare collector’s item can of OZZY beer, a Belgian style Pale Ale that is no longer in production. Upon its release at the end of 2013 the beer from Brewer’s Art micro brewery the beer almost instantly received a cease and desist letter from the Osbourne management to prohibit the production of the Ozzy trademarks and name. A rather unfortunate move as this beer was one of the first and could have preceded the trend of bands and brewers / distillers joining hands expanding the merchandise bins and inflate the fan experience of loyal followers we see currently. 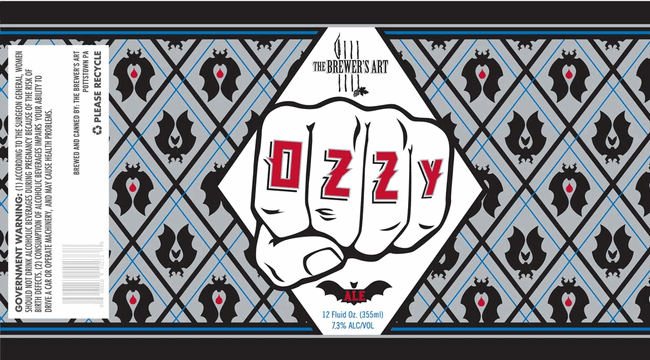 Mission Media designed this slick canned beer. Ozzy’s tattooed knuckles hitting me full frontal, and the all over bat motive is an easy figured out reference to the self-proclaimed Prince of Darkness. A closer inspection even learns that the devil is in the detail with the upside down posted of the bats actually missing their heads and dripping blood, bit off likely by the Ozzman. Another little gimmick is the contents marked in ounces; oz to be precise. The slick metal silver can adds to the exposure and the art is simple and effective, making this a wanted and appealing collector’s item. With the Ozzy beer being a collector’s item since it was banned from the shelves, I keep the original can closed and open the Beazly version of the same brew that he also added. Redesigned with all signature Ozzy references taken down, the can however still looks pretty similar to the original. Beazly’s art features the Devil’s pitchfork where the bats were once posted, and the knuckles of the Ozzman are replaced by barnman Beazly’s motor scooter. The downgrade of the artwork works more or less like an upgrade in terms of presentation and fun.

OZZY / BEAZLY
Belgian Strong Pale Ale
Renamed Beazly
7.3 % ABV
The beer is a shiny blonde pour with a little haze in its last drips, and a thin foamy head that waves off fast. The head is thinner than the fury European toppings that are steadier and more persistent, which is typical for many US brews.
The beer’s nose is reminiscent to the classic Belgian Duvel and reveals crispy malts the same dry hop notes as the Belgian big one. There’s a little lemon grass sniff present. Typical and well balanced it is a good pour for a summer day.
With Duvel in mind the beer differs in taste and indeed opens more bitter with Pale Ale specifics, hailing from the dry hopping process using Styrian Golding. A yeasty round body that evolves with dry mouth feeling and is long lasting. Flourishing are the top notes with banana and a remote citrus. The taste is enduring and pleasant, rather refreshing.
It is not ground shaking, but a solid and refreshing beer in line with the Belgian Duvel and Lucifer beers. Especially the later Dry Hopped Duvel versions come to mind with this Beazly holding the exact middle between the original Duvel and their Dry Hopped edition. 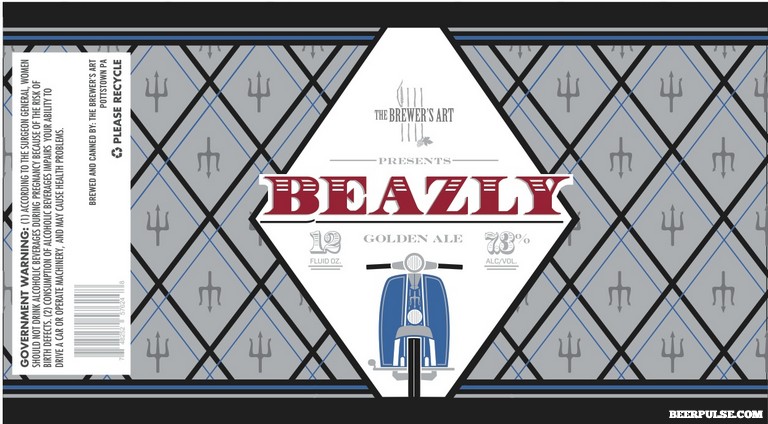 What remains is a little bitterness that’s not because of the beers longevity, but from the decision of Ozzy and his team banning the original release. True, it wasn’t smart of Brewer’s Art to use the trademarks without consulting the Ozz-team, but I regret the fact that the Osbourne’s didn’t try collaboration, as this is one of the slickest and sickest designs available in the band beverages world. Ozzy’s knuckles and tattoo facing you against the background filled with bats and dripping blood is simply to good to leave in the shelves and was likely a can every metalhead or headless bat would have bought to complete their Ozz collection.
—