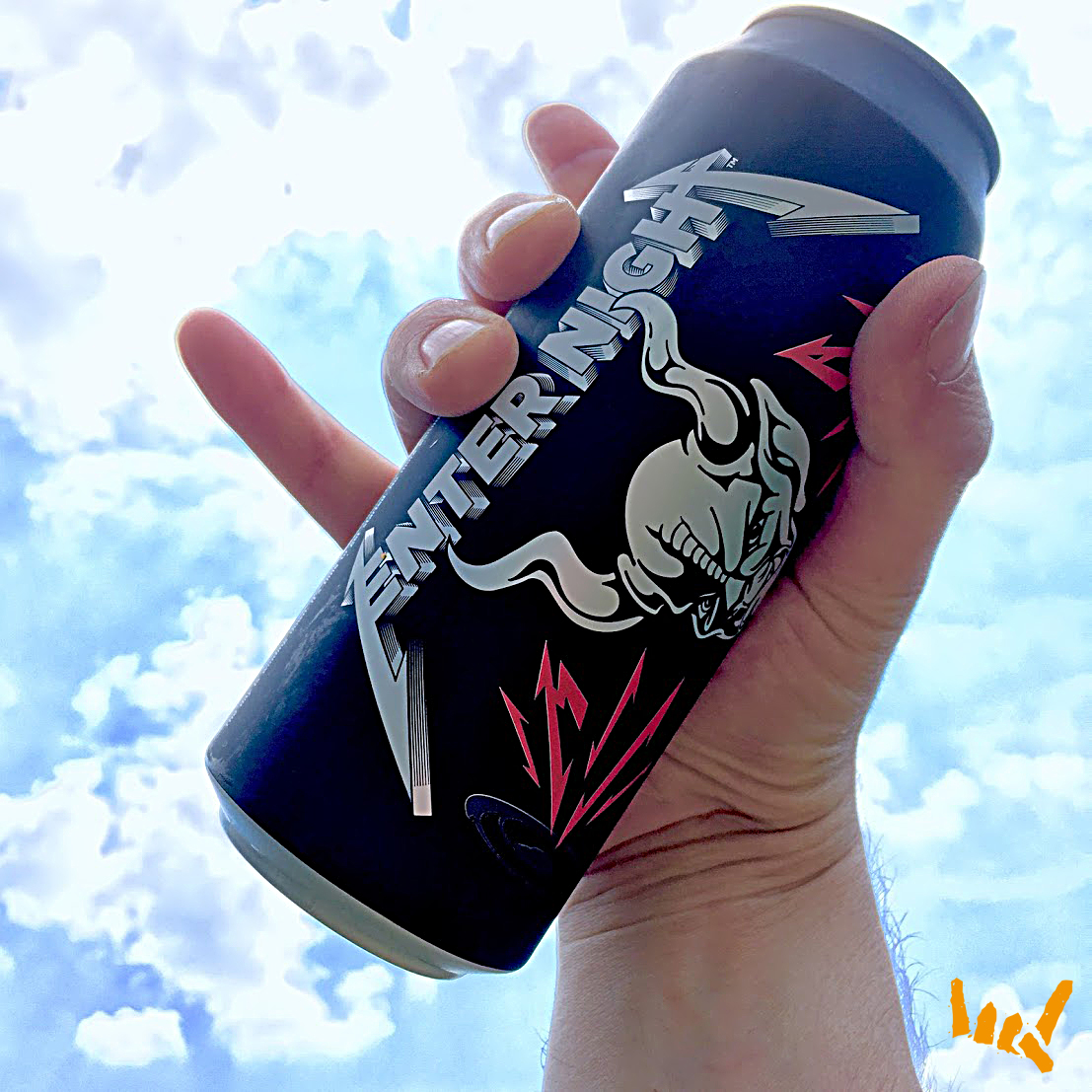 Though this is a collaboration matching each other’s pretentions, it is one I did not expect right away. With Stone Brewing’s wide spread praise for their (mainly heavily hopped) brews and their typical Gargoyle Devil logo, the unexpected is expected after all. It adds up to the brewery extending their reach into the band branded metal scene, and where to start better than with Heavy Metal’s biggest band to wander the globe: METALLICA! 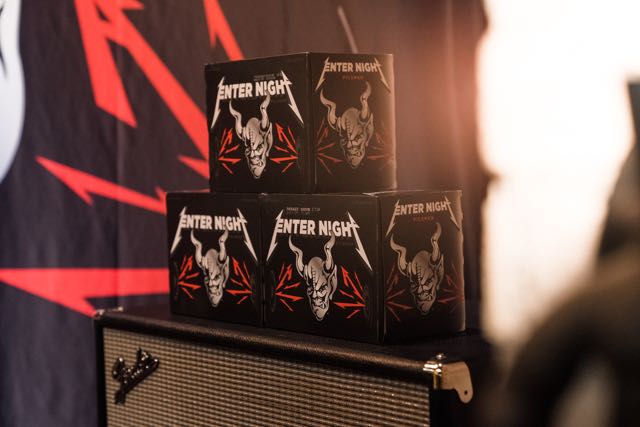 Working closely together with the band, the result of this fieldtrip is a beer that adds to the band’s allure and that of the brewery. Slick matte black pint cans with silver and white logo of the pilsner’s name in Metallica style logo, the Stone Gargoyle in silver and speakers blasting red lightning. Or… wait… the devil is in the details with this artwork as the blitz blasting from the speakers is clearly the band’s recognizable M logo. Slick!
Another slick detail is the can’s top, also in deep, yet glossy, black. It adds up nicely.
Leaving no Stone unturned when it comes to its presentation I can only suggest fans to pick up the limited edition collectors box. An impressive piece of work containing 3 cans and upon opening playing ,,Enter Sandman”!
It is just fun to have and even more fun to give away to that Metalli-head of a friend in your surroundings. The package features stickers and coasters, plus an invite for a brewery tour at Stone Brewing’s European headquarters in Berlin. (Or US, if you have the American version – I assume.) 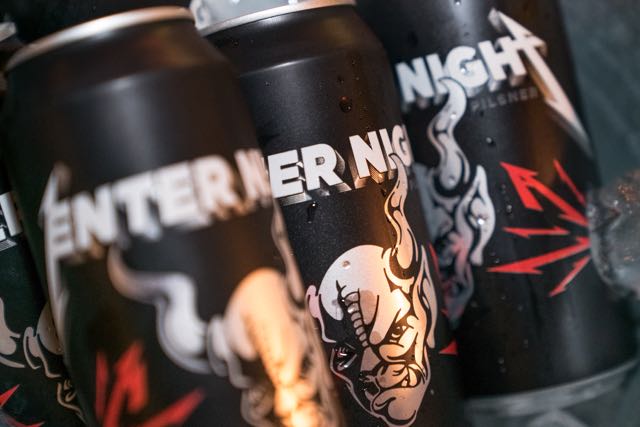 ENTER NIGHT PILSNER
Dry-hopped pilener
5,7 % ABV
The beer is a shiny blonde pour with, and a thin foamy head that is long endured upon fast pour. The head is nice and foamy and adds to the European enter Stone Berlin range of craft beers.
Without diving deep into the ins and outs of this collaboration upon tasting, I was pleasantly surprised by the hoppy sweet nose present. Expecting a typical pilsner I didn’t have high hopes and expected the usual flathead shugging beer. With disappointment driven by previous tastings of AC/DC Rock or Burst, prejudice nested and scepticism had a firm grip around my taste buds. Enter Night however is none of the above. It has a pleasant fruity IPA-reminiscent nose uplifting my senses and enthusing me on the spot.

Enter Night found its way into my glass on a warm summer day and having it chilled back close to 0 centigrade made it rewardingly refreshing. Though chilled back this much it might come across too cold, but believe me: after mowing the lawn for over 2 hours in the glazing broiling sun, this is as refreshing as beer can get. The scent of fresh mown grass in the air enhanced the fruity tone and added to the pleasure. Refreshing and cold it finds its way down and this pint made me immediately open a next. My Manowar-fan neighbour installing solar panels on his roof ran down the ladder psyched as he had only then learned about the beer’s existence. So yes: we slammed a few and needless to say…. We didn’t get any more work done. 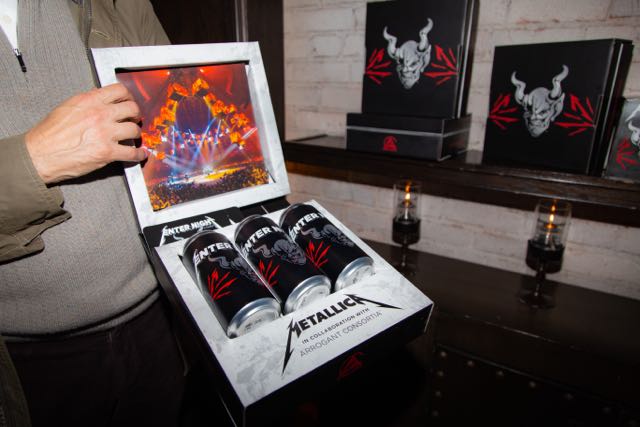 Only one can left in my fridge I cleansed my glass for another pour, with my tasting notes present. With the crisp scent of grass in the springtime not present, the fruity nose was still pleasantly present and so was the taste. Unlike a regular pilsner Stone Brewing turned to their Arrogant Consortia to assemble a beer matching Metallica’s high demands. With the band adding their personal ideas, the team came up with uncommon German Mandarina Bavaria and American Emerald and Sterling hops used in the process of dry hopping adding that spectacular Stone Brewing typical Hoppiness! Like the previous day I am again surprised by its tasty fruity but mild hoppy bitterness with mild citrus fruit, reminiscent to Dupont’s early dry hopping Cuvée’s. Milder and more pleasantly balancing out on the tongue in its bitterness, Enter Night’s taste is rather long lasting and full bodied. Its taste is nice and round with a punch of bitterness. Though nothing like the typical IPA, it still bears those fresh and fruity notes in a subtle presence. 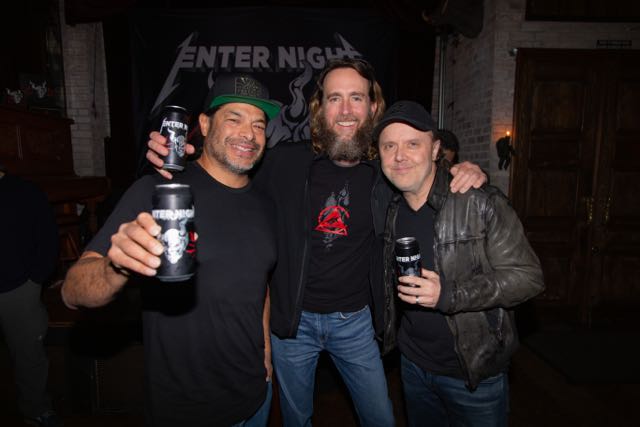 Though I was prejudice at first, Enter Night set the record straight right off the bat. It is a highly enjoyable beer and solid collaboration. It enhances the band’s catalogue of merchandise and adds poise. It also adds to the likeliness of its creators at Stone Brewing. With their name orbiting as one of the coolest breweries in the world, this Enter Night opens up another market for them… that of metal fans… much like the brewery’s founder Greg Koch…. a Bay Area metalhead of the first hour.