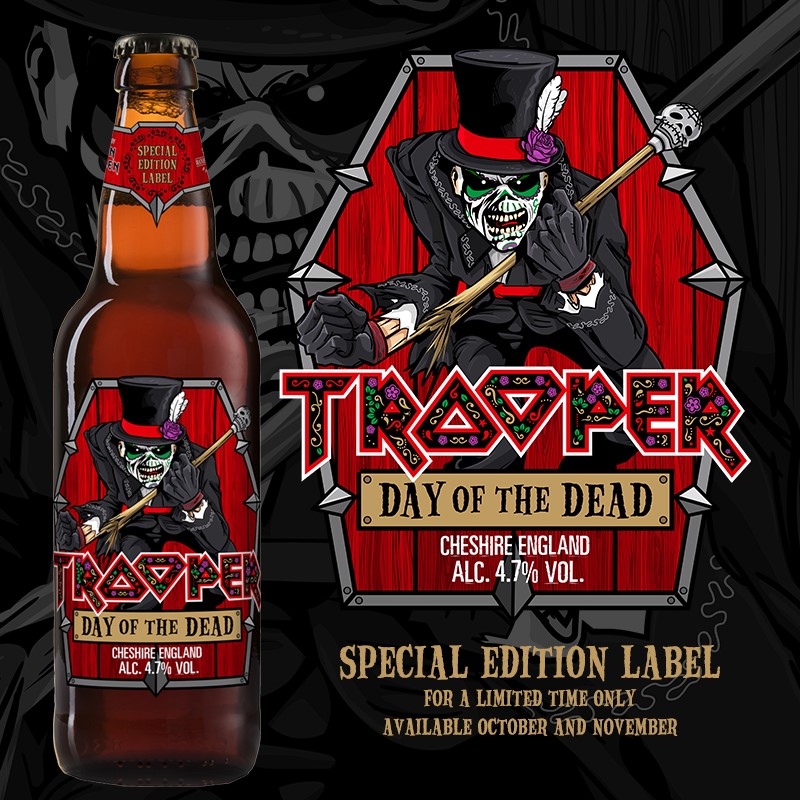 Iron Maiden: One of metal’s biggest and baddest has been the frontrunner in merchant out their logo and name. With the band making their music coincide with their love for hard rock traditions they brewed up a wide variety of beers over the last few years, and added to the craftbeer revolution within the rock arenas.

They brought together their strong brand as a band fusing it with typical English ales cooked up at their favourite brewery, Robinson’s Brewery in England, making the collaboration a long lasting one with oozing respect. As an addition to their Trooper Ale, they label homage to the historical charge of the English Light Brigade, the band recently brought “Day Of The Dead” to the shelves for a limited time only. Available from October through November only, this is a must have for fans and a welcome addition to the expanding brand. 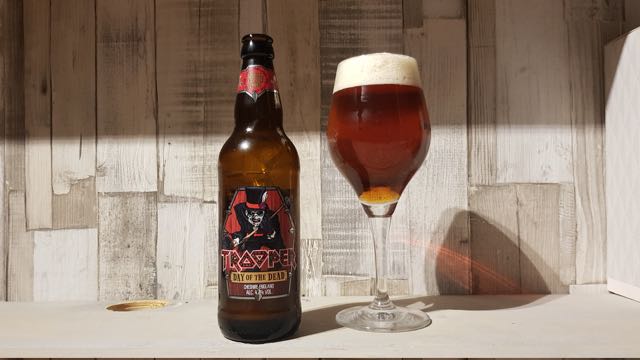 Iron Maiden Trooper Ale – Day of the Dead
English (Amber) Ale
4.7 % ABV
Based on the traditional English Ales, Trooper is a slightly hazy amber/copper coloured English Ale with a nice puffy foam head topping it off in style. The beer took the band’s brand worldwide and is currently one of the best-sold beers with over 25 million pints sold. This Day Of The Dead is a follow up with the same attitude, but slightly differentiates from the original pour.
Key feature is the presentation of the bottle. Iconic Eddy is dressed up in a suit with top hat for the occasion, celebrating Mexico’s Dia de los Muertos (Day of the dead), complete with the face print of the festival. The holiday celebrates the dead and honours the ancestors inviting them back into their homes as eternal part of their family. In a nutshell this is of course applying perfectly to Iron Maiden’s mascot, who has been through quite some changes and life changing moments over the last few decades himself. Remember ,,Life After Death”, ,,No Payer for the Dying” or the epic art of ,,Reincarnation of Benjamin Breeg? The art is, as expected, slick and consistent, with its bottle cap also printed in collectible art.

Much like the renowned Trooper Ale, this version pours slightly darker and little more copper toned. Its nice white head is alluring and full. Its aroma is dominated by malts with remote caramel notes and little citrus in the back. Much like all English Ales it has a medium to high bitter body. This harshness balanced out by a crisp zesty undertone for this edition, without coming out on top. Dominant notes are the malts and grains, with typical grainy bready drought. The taste however waves fast and is somewhat watery making it an easy drink to enjoy at any watering hole.
For fans of the band and English Ales, this is a good treat. For me however it does not add too much value, nor does it get me enthused. It is more collectable than tasty per se.
Ow… and for fans of KING DIAMOND and MERCYFUL FATE this might also add to your collection, with Eddy’s face paint being very reminiscent to that of the Danish high pitcher! 🙂
—