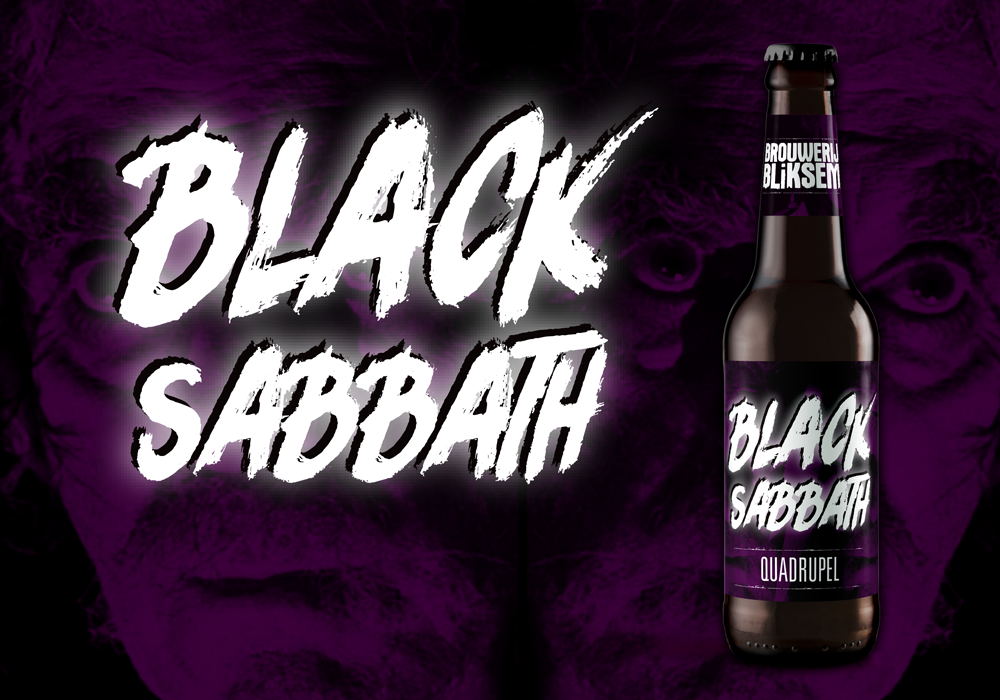 Dutch crafter revolution is at full swing, with thousands of micro breweries sprouting all over the country. With the army of craft beer enthusiasts expanding rapidly all over the country and world wide, the diversity in beers is on high demand. Needless to say that hard rock fans and rockers are in the front lines of the action with bands adding their branded name to the beers frequently.

Dutch Bliksem brewery has established a firm name as micro brewery over the last couple of years. Their consistence is celebrated and their choices for brews are enthusing many devotees. With their release of a dark dense Belgian Quad, the brewers reveal their fine nose for quality as well as their devotion for a band. Black Sabbath Quadrupel is an impressive piece of work, but also one on a slippery slope. Remembering how Ozzy and his management took to court the American craft beer Brewers Art for unauthorized use of his name and image, I suggest we enrol this review without tagging any of Sabbath’s name givers or companies involved. 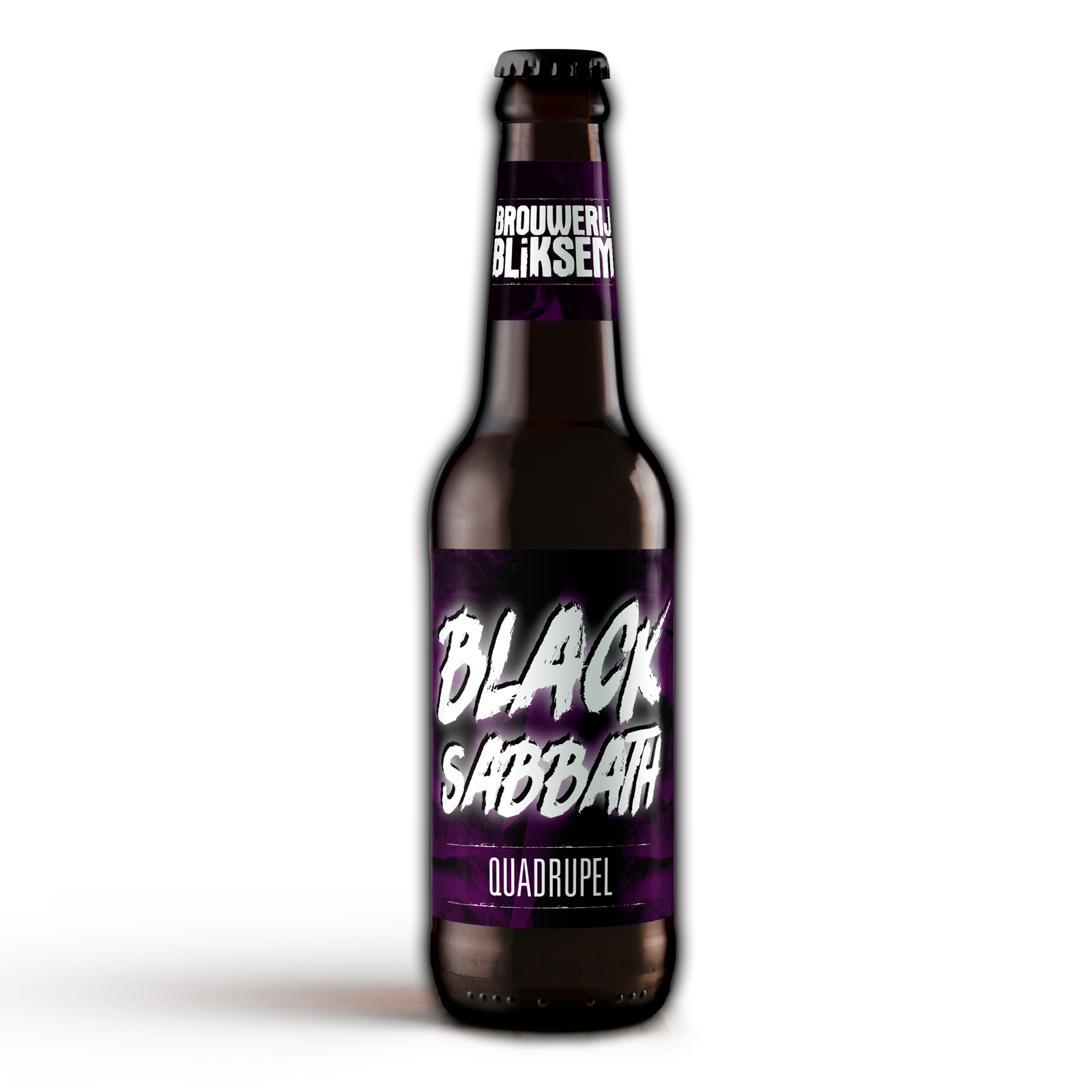 BLACK SABBATH
Belgian Quadrupel
10 % ABV
Sober is its presentation with the deep purple and black label matching the band’s doom dark sound. Not using the Black Sabbath font is a smart move. Subtlety adding the logo on the back label and bottle neck’s label still hints the brewers love for the band rather than choice for a name. Elegant. Unlike most Belgian Quads consisting of high ABV’s this Bliksem (translated: Lightning) quadruped is less boozy and its 10% makes it easier accessible. Especially the boozy dominant alcoholic nose is subdued by the elegant balance of the beer.

Balancing on the fine line between Barley Wines and Quadrupel Black Sabbath is a stand out execution of craftsmanship. Pouring the beer in a wide (Trappist) chalice, the beer immediately introduces a wide array of aromas. The deep dark low carbonated/still beer is topped by a foamy head, like an overly enthusiastic cola pour.
It settles nicely in your chalice and diving into the beer nose first you get hammered by the wonderful chocolate and roast body. Taking in the dominant scents more remotely reveals blueberry and I believe figs. Being brewed with Maple syrup, the beer also packs some subtle molasses aroma slowly surfacing when you take your first sip of the beer. With the foam covering the direct taste, aromas and scents swirl making its introduction very intense. The typical roasted stout notes are comforting with a nice sweet overhaul adding to the intense body. Waves of burnt coffee bitterness fusing with the stout bitter tones and balanced out just right by an intense taste of nuts and liquorice. The latter being the Dutch variant and its salty underscore holds up well with the molasses and berries in its palette. It waves in a bittersweet swirl of complexity, much like the hypnotic tones of the band’s early albums. With its 10% ABV it does not have the prominence of alcoholic flavours in the forefront of its taste and its low carbonation makes it an easy, yet dangerously enjoyable beer. 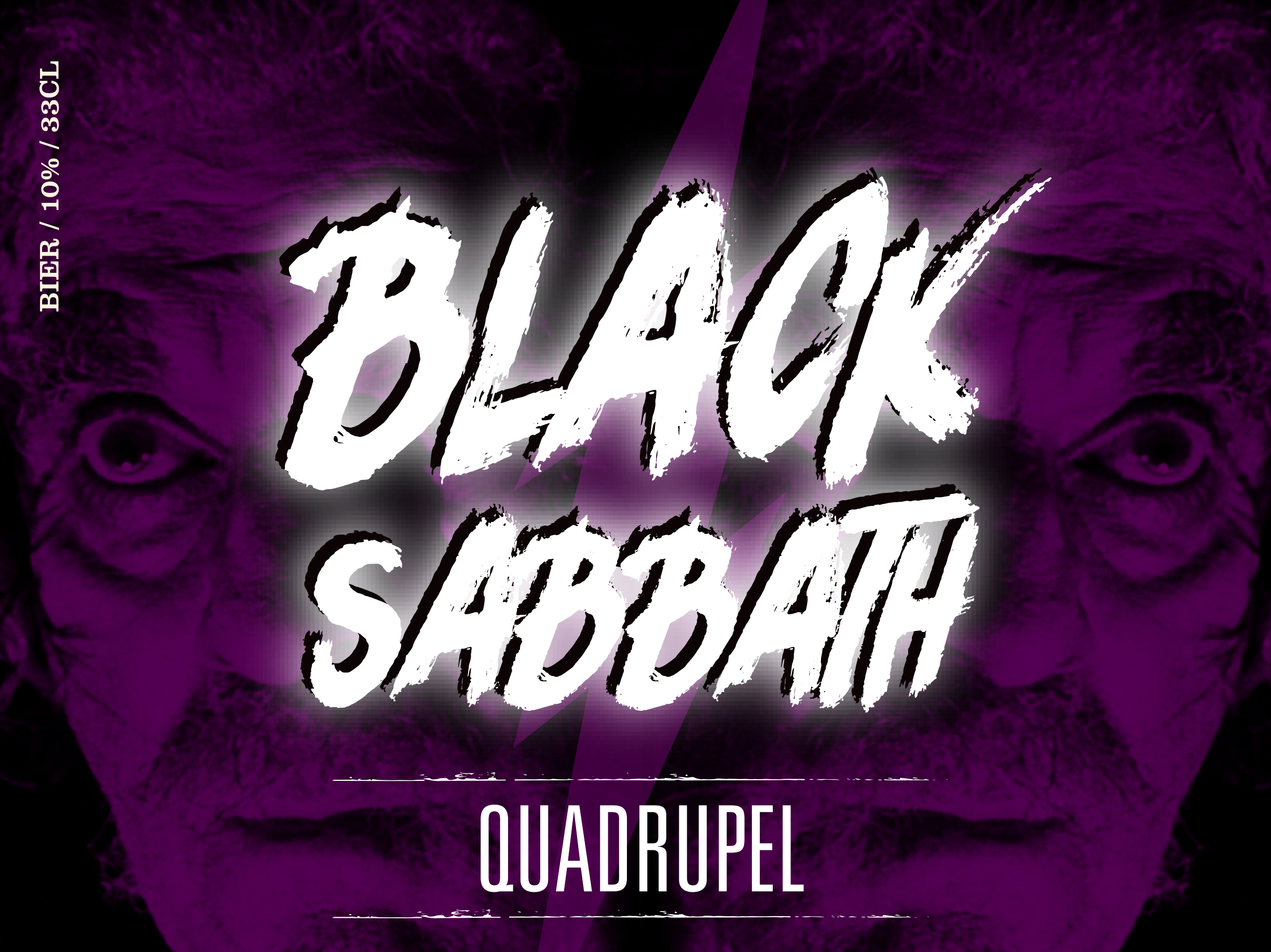 I am not sure whether my headache after 4 of these slammed was from the beer itself or the combination of tasting slamming and banging head to the hypnotizing `Masters Of Reality’ album. Either way, the aftermath was scorching and created a memorable side note. Black Sabbath holds up in terms of taste and adds to the experience of playing the vinyl of the band’s early releases, and it is not accidental this quad landed Bliksem the regional title of best beer of Dutch Brabant in 2018.

Now my reason for reviewing this 2018 release is the recent addition of a bourbon barrel aged version of this Quadrupel giant as well as a stunningly brilliant winter edition, both adding a new dimension to the hypnotically psychedelic band name. With the above as benchmark for my review drawn up a week earlier, I needed to revisit the bottle and crack open two of these other beauties in he process. Man, the punishment of reviewing…. 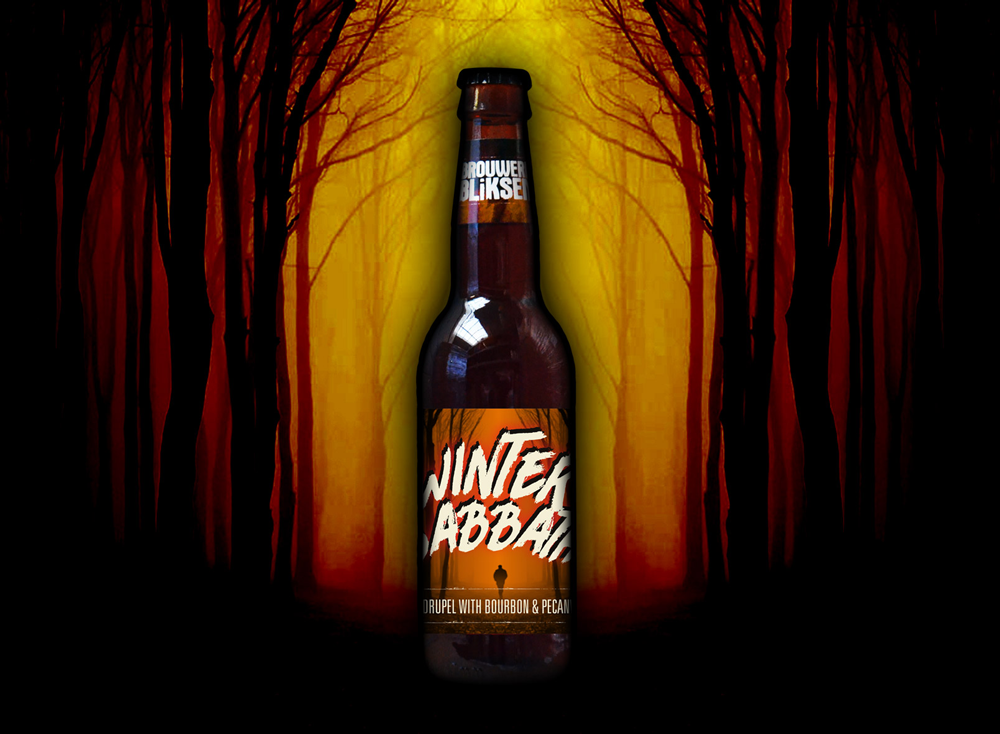 WINTER SABBATH
Winter infused Belgian Quadruple
11% ABV
Revisiting my tasting notes of the first edition and popping a bottle made me feel tremendously proud of my efforts. LOL. Reading back my findings I still align with them making it my first time not editing the entire article. With the Winter Sabbath now landing next to my glass I am excited to review this treat and see if it holds up aside the Black Sabbath Quad.

In line with its predecessor the label again is sober but adds value to the beer’s exposure. Not purple but in brownish tints it adds to the time of year with autumn shining through rather than winter. Nonetheless is adds up perfectly and upon pouring the first taster, I immediately feel confident with it.
Much like the original it instantly reveals the wide aromatic palette and a more dominant nutty presence. Diving deeper into its story of creation that is easily explained because of the use of bourbon infusing layered on pecan wood. The nutty scent is unexpectedly dominant over the bourbon scent and the sweetness of the original waving in the back. More vanilla toned its first sup immediately reveals a pleasant sweet aroma that fuses with your taste. Instead of the swirl of aroma and tastes blending tasting Black Sabbath, Winter Sabbath more fluently fuses nose and tongue feel. The sticky caramel-like mouthfeel adds to the bourbon finish that is slowly winning terrain with every sip. It just gels extremely well and feels pretty overwhelming at times. The sticky sweetness also remotely reminds of toffee and fudge while the alcoholic boozy taste nests. What is most impressive however is the woody oak finish caving in the bourbon vanilla finish.
The best part to tasting the 2.0 elevated version is the fact that it just gels better than the original, and the vanilla Bourbon and pecan wood notes are not too much on top, making it very enjoyable. As it is not as intensely swirling as the Black Sabbath Quad, I picked the `Eternal Idol’ album and `Headless Cross’ to accompany my tasting experience. It just felt more in line with the subtlety of the sweet notes and the melodies of those albums simply added up far better than Ozzy or Dio’s Black Sabbath tracks. 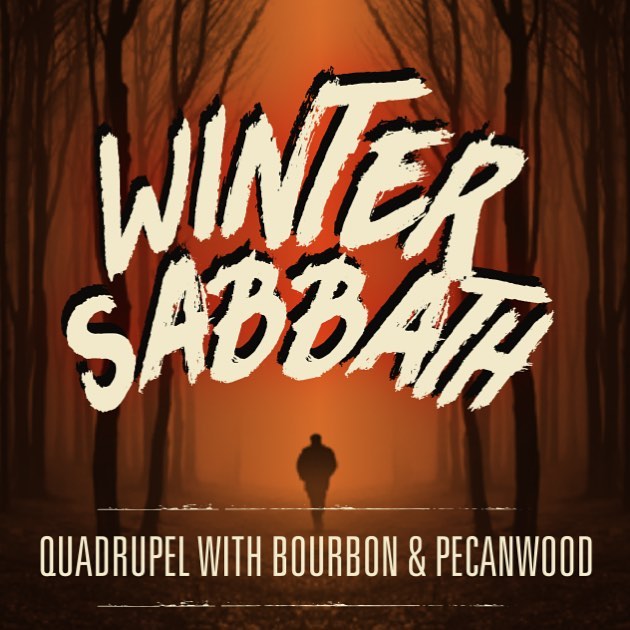 With the Winter Sabbath packing great Bourbon notes in the well balanced body of the beer, I got more and more exited to taste this magnum Opus of the beer. Bourbon Barrel Aged dark ales tend to reveal the deepest of beer malts and roasts fused with the top notes of Bourbons and Whiskeys. Recently bought local 400 Watt Bunnahabhain of Stadsbrouwerij Eindhoven in mind, I am up for the challenge. The Eindhoven brewer has aged their Barley Wine on Barrels of the Single Malt and it has intensely increased its taste, taking it into an entirely different direction. This BBA Black Sabbath has me excited as all other Bliksem Beers winning me over on the spot. 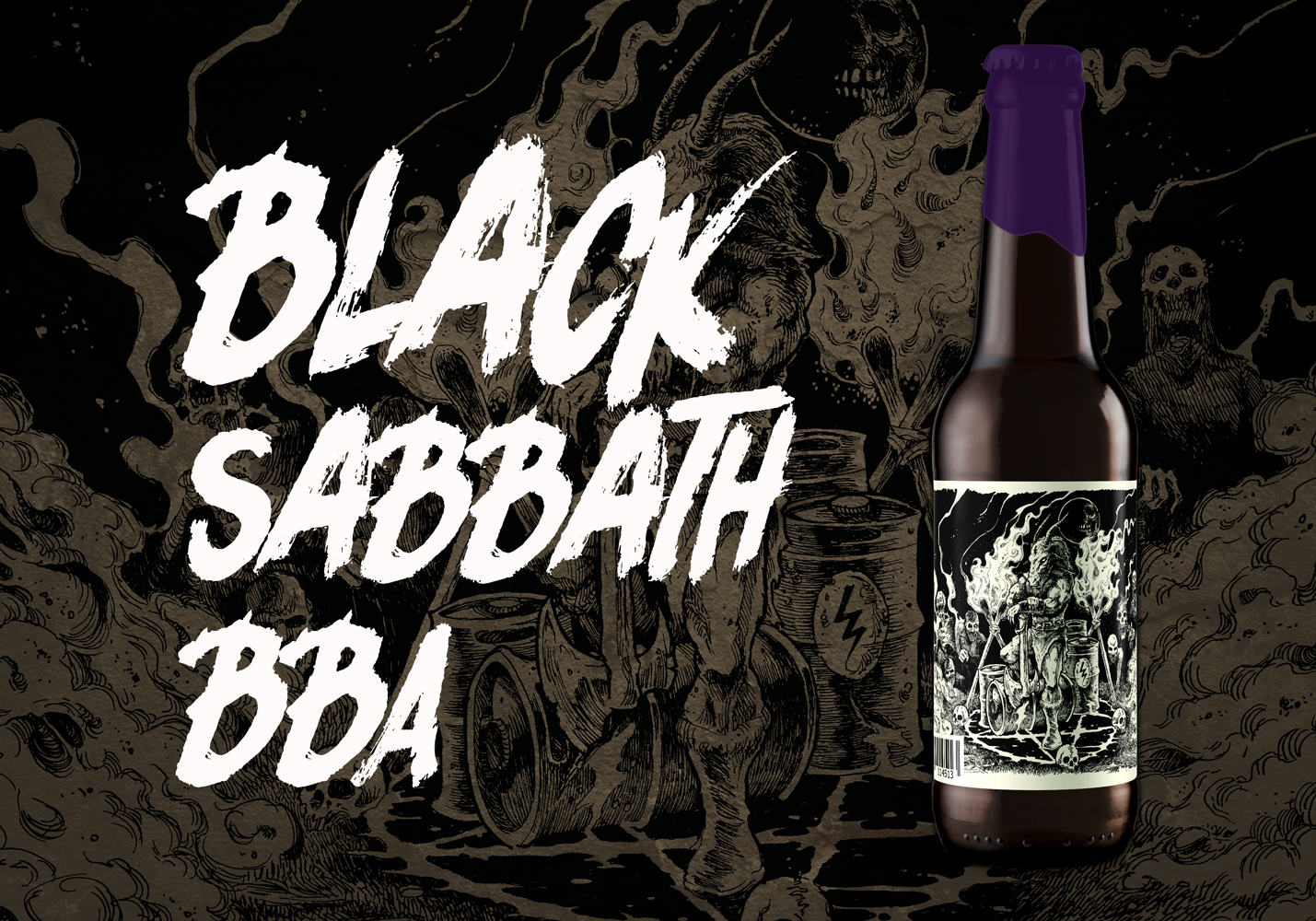 BLACK SABBATH BBA
Bourbon Barrel Aged Belgian Quadrupel
12 % ABV
With the Winter Sabbath still in mind and the 400 Watt as my point on the horizon, Black Sabbath BBA proves an entirely different entity. Not featuring the piercing Malts like 400 Watt, the beer is balanced like Winter Sabbath and the aging does justice to its overall taste.

The waxed bottle immediately impresses and the grim artwork made me reach for the start button playing ,,Live Evil” following up the dying second of ,,Headless Cross”. Miracle it is, I immediately feel comfortable with this choice and upon pouring the bottle I am taken into ,,Neon Knights” with the exquisite scents of the beer opening its palette. Where Winter Sabbath has the Bourbon present off the bat, this BBA version takes a little more time to reveal the utterly brilliance of this pairing. Aging on Jack Daniels and Heaven Hills barrels, I expected less subtlety and more poky notes. However, the beer tends to evolve its taste with the caramel and vanilla whelming and slowly making way for the bourbon finish. The oaky taste blends with the nutty and toasty notes and places this beer more in between Black Sabbath and Winter Sabbath. The subtleness of the palette also makes it a very enjoyable, yet a bit denser in aftertaste. It just takes a little to get squinted with the rich tones and the warming presence of the alcohol. It also has a much dryer finish making it less accessible but more enjoyable. The oily and sticky mouthfeel is adding to this drought perfectly and tickles the senses. 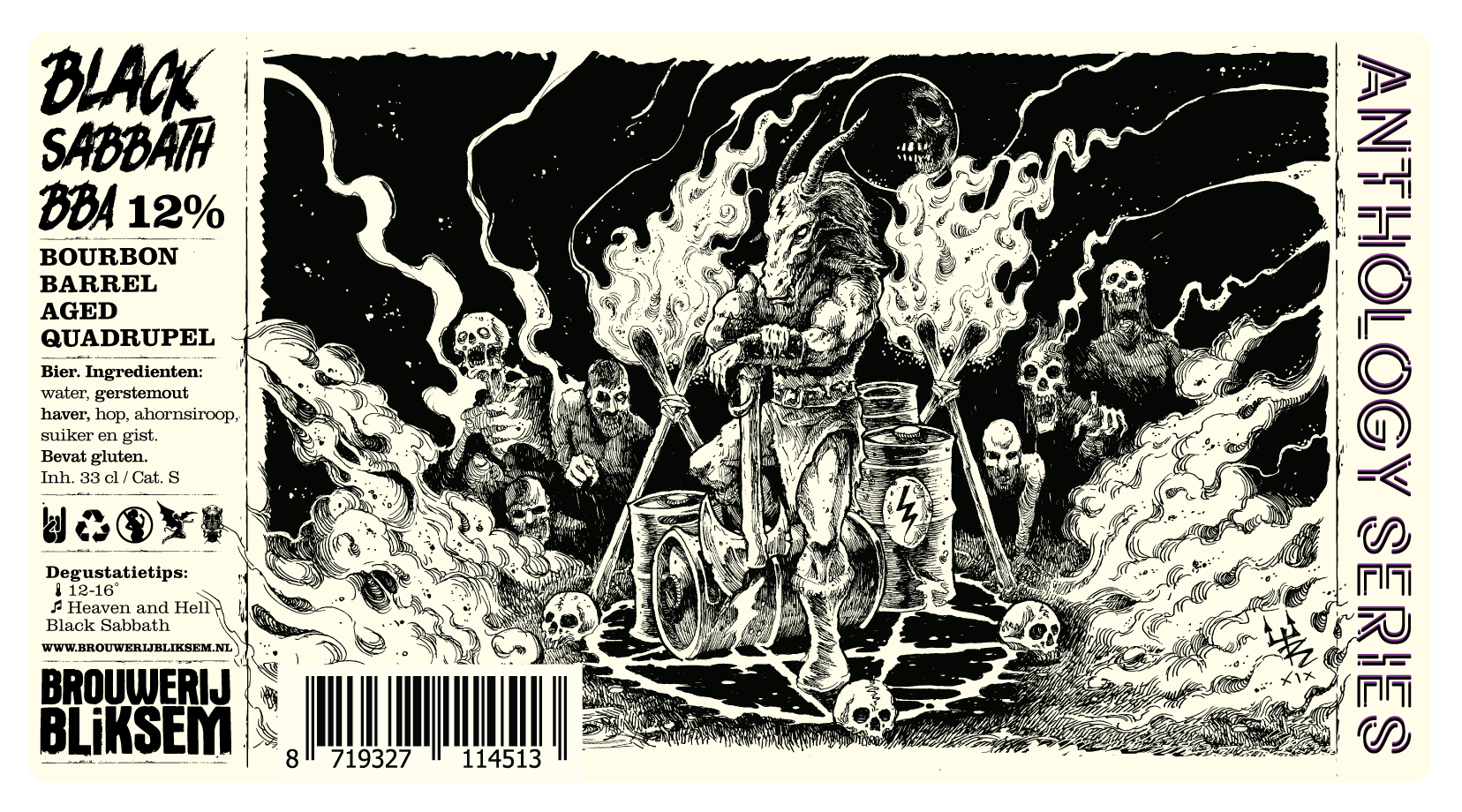 Black Sabbath Bourbon Barrel Aged is pitch perfect though little less accessible than the Winter edition of the beer. The enigmatic of taste and scent do gel well and take time to truly reveal the fine qualities of this brew. Allow it time and take time. This is not a bottle to empty out in minutes. With the glass warming to 12 – 15 centigrade the beer keeps revealing more of its depths in taste and scents. This is a tasting experience. With enthusiasts drawing their wallets for special editions like this it adds to the posture of the brewery as well as to the mind boggles of craft beer lovers worldwide. 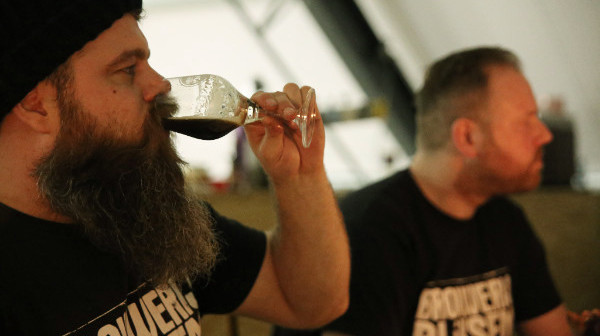 Conclusion:
This trio adds to one another perfectly and deepens the tastes and scents. It is an exploration of senses packed in bottles under the Black Sabbath banner. Much to my findings, the band and Ozzy’s management should praise the effort and embrace Bliksem’s insanely wonderful brews. Lightning strikes twice no longer, it strikes 3 times.

Must Taste – Must Have – Must Experience!
—
KEEP UPDATED
Brouwerij Bliksem on Facebook here