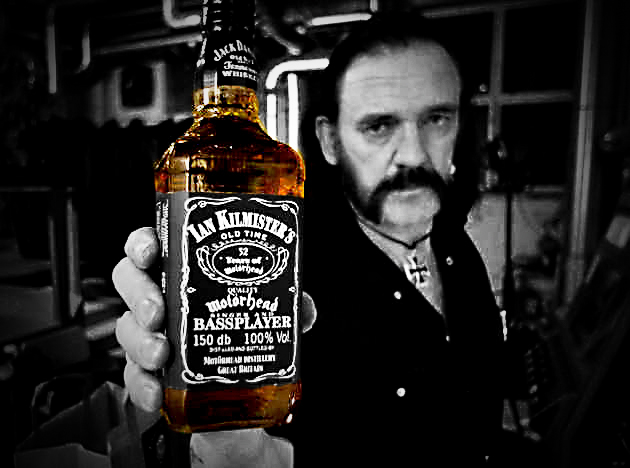 As mandatory as whisky and bourbon are for metal heads, the mandatory becomes the following review for us all. With Lemmy’s passing, not only heavy metal lost one of its most beloved pioneers and entrepreneurs, whiskey also lost an iconic devotee. Mr. Kilmister was often seen with his beloved Bourbon and many tales are told about his devotion throughout the years. Inseparable he seemed: The cigarette and the bottle of Jack. Take 10 oz’s of coke and 2 oz’s of Jack Daniels, and you have what is called a “Lemmy” on Sunset Strip. Lemmy was Motörhead & Lemmy was as Rock ’n Roll as one can be. With his devotion towards Jack Daniels and whiskey in general, Lemmy also became a trendsetter for metal heads enjoying liquor. 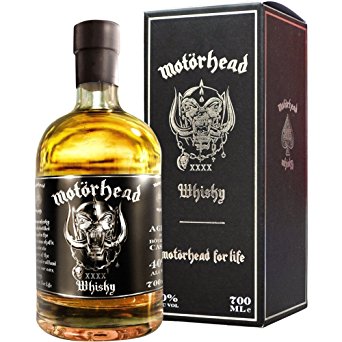 MOTÖRHEAD WHISKY
XXXX
Single Malt Scotch
40% ABV
One we can’t discard in our new section of HBLS’ Food & Beverages section therefor is the Motörhead XXXX Whisky. This single malt is a genuine treat for aficionados of the band as well as fans of a good single malt Scotch with a solid body.
What strikes me however is the fact that assemblers of this Single Malt surpassed the fact that Master Kilmister was a devotee of the classic Jack Daniels bourbon, as much as it struck me that JD themselves didn’t add their expertise to pay tribute to their loyal fan. Since Lemmy left us, Jack Daniels lost one of the most likeable personalities in rock plea-bargaining for the brand. I am convinced that JD owes a lot of sales to the rock ‘n roller and his followers.
This quadruple X Single Malt however is assembled in close cooperation with the band and renowned distillery Mackmyra. It does surpass the classic bourbon on all accounts. With Motörhead whisky matured on Olorosso sherry casks, it adds a lot of depth and character to this single malt whisky. It’s a perfect marriage of Lemmy’s dangling cigarette and his inseparable bottle on the side. Meaning?
Motörhead XXXX Whisky is a cross blend of spices with vanilla and citrus deeply embedded in the solid harsh body. A smoky aroma of tobacco hits you on the spot and the deep rich tawny colour is joyous and powerful. The taste is lasting long and the tobacco and smoke in rooted deeply in the firm body is extravagant but not overwhelming, making this enjoyable for a wide audience. Thus this Whisky is a great homage to the master of rock ‘n roll, the ultimate king of metal. Lemmy is present throughout every taste of this excellent powerhouse Malt.
And yeah: Add to the joy is a record of good old Motörhead with `Ace Of Spades’ coming to mind and the `Iron Fist’ hitting you in the face full frontal…. Especially the day after. 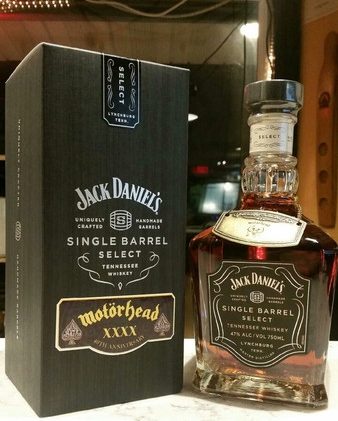 MOTÖRHEAD XXXX
By Jack Jack Daniel’s
Single Barrel Select Bourbon
47% ABV
It’s not that I missed out on the fact that there indeed surfaced an extremely rare edition of Jack Daniel’s with a Motörhead reference. The XXXX was another tribute to the loudest band and their 40th anniversary as well as homage to the most badass bass player in the world, and was released around Lemmy’s unfortunate passing. But don’t get the wrong message: it was not at all a tribute initiated by the distiller himself…
Let’s clarify; Jack Daniel’s recently (2015) started a personal collection program called jackdaniels-by-the-barrel. Retail –and consumer accounts have the ability to purchase an entire barrel of JD with a personalized medallion and logo included. In this case the retail account included the name and logo of the pioneers of metal, often mischaracterized in the media implying this as a commemorative release of Jack Daniels as a tribute to Lemmy and the band. It is not!
Much like the Single Malt edition however, this Jack Daniel’s edition also features the charcoal smoky finish and has the full powerful body the bourbon distiller is known for. Adding to the joy is the rich and deep tobacco colour and flavour and the appearance of the bottle itself. The chained breastplate with the famous rattle head logo dangling on the shoulders of the bottle reminds me of Lemmy wearing the breastplate in the past. It adds up to the character of the bottle.
With this particular release limited to one barrel only, it only enrolled a mere 288 bottles coinciding with the recent passing of Lemmy. In between Lemmy’s passing and the release of this rare edition was only two weeks making it a harsh and bitter coincidental purchase. It sold out immediately and is cherished by lucky fans.
No review… too rare. 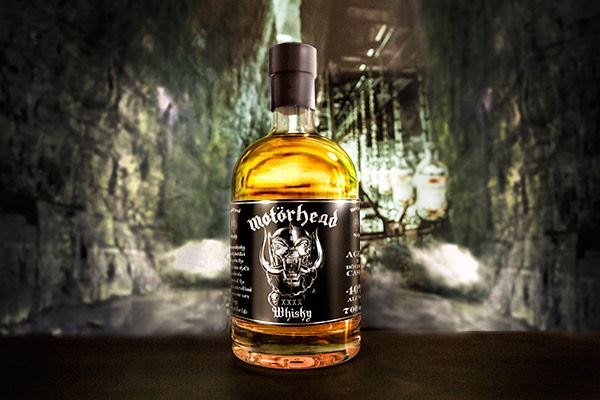