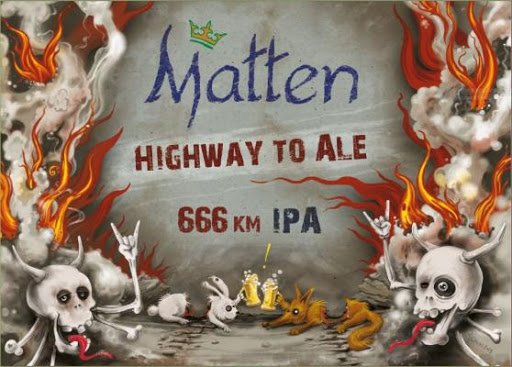 Only 666 km of diabolically hopping

Wandering and wondering around in France it is fairly easy to come across Wineries and miles of vineyards. Whether you’re in the north, centre or deep south of the country, wineries are the synonym for the many regions. Bourgogne, Medoc, Languedoc and Bordeaux are renowned for their great wines. Not to discard the specific regions with special applications such as Pomerol and Haut-Medoc. Not to mention specific wines and spirits with high profile names like Champagne, Monbazillac and Cognac. It is impossible to map out the entire constellation regions and areas, not to mention its appellations system and quality levels. AOC recently changed to AOP, and then there’s the variety of Cru’s to make it more difficult. With a country so deeply connected and affiliated with wine and its cultivation and legacy, it is hard to picture a revolution in a field so neglected as the beer market. 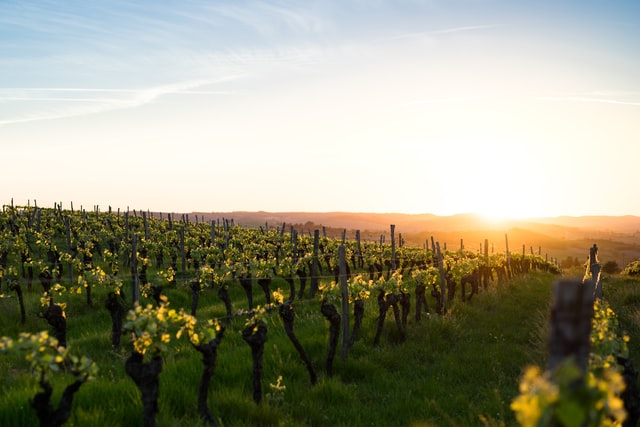 I remember one of my visits to France in 2012 and my attempt to persuade a wine maker to enjoy one of my abbey beers, or at least try it. The large bottle popped was a Kapittel Prior from Watou that was 3 years overdue, aged in my personal cellar. Hinting the fact is actually aged to make it flourish, the 76 years old winemaker decided to have a taste. Hesitative on what to expect he nipped the glass, but the overwhelming sweet bouquet of caramel and salty subnotes immediately won him over. He was stunned by the beer’s appeal, something he had never expected nor encountered in France. An eye-opening experience to him as it was to me. Loving the variety of French wines, I have always been open to the surprise, yet others apparently are stuck to prejudice in a country ruled by the law of the vineyard. He came back to share his best bottle later that week and I popped an Oak Aged La Trappe (batch 9 aged on Malbec barrels!), just to share what wines can do for beer during its lager- and aging process. Up until today I am convinced this was a life altering experience for the old farmer…

In a country as prejudice to beer as it is to improvement and enhancement of taste, it becomes extra challenging to initiate a revolution on the subdued beer market. 9 years later however, and many more trips behind my belt, we see the craftbeer market in France taking off. Recalling the trip to the Dordogne in 2016 vividly, I noticed an overwhelming amount of small regional craftbeer brewers sprouting. Many of those managed to win me over immediately and on my annual trips I discovered quite some spectacular favourites. 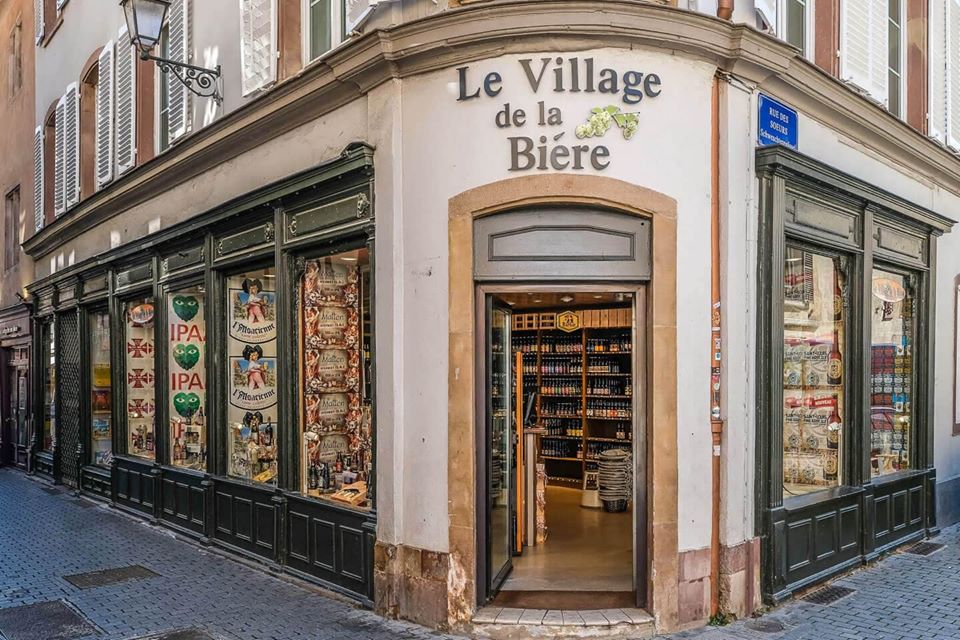 On my recent short visit to Strasbourg I came across a shop chockfull of French beers. Based in the centre of the city the shop, Le Village De La Biére (The village of beers), featured a wide variety of French craftbeer as well as beers from all over the globe. Drawn to the saveurs de la region (flavours of the region) I collected some for a tasting at home. One I could not leave behind, this Highway To Ale, the spin-off of AC/DC’s hit album `Highway To Hell’. A must feature on our Heavy Hangover pages. Highway To Ale is the collaborative outcome of befriended French brewers Brasserie Matten from the Alsace area, and Brasserie de Fleurac based in the Auvergne department. A collaboration with a luring name, exactly separated by 666 km’s of highway! 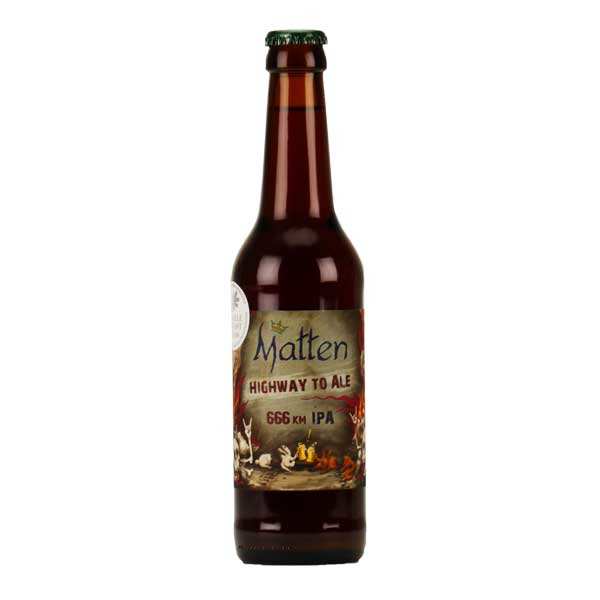 MATTEN – Highway to Ale
666 KM IPA
American-Style India Pale Ale
6.66 % ABV
The beer immediately drew my attention. The name above all, but there’s some little gimmicks and artwork twists not to be discarded: Of course, Dio’s Horns are featured, subtle. The hand gesture of heavy metal… There’s hellfire and horned skulls on the charcoal dark background. Dark art-ish are the fox and the hare raising beer glasses while being overran as road pizza. More impressive however are the following: Brasserie de Fleurac and Brasserie Matten are sited 666 km apart from each other. Encompassing this subtle note are the beers IBU and ABV. The alcohol percentage (ABV), which is exactly 6.66%, and the beer is also 66.6 IBU (International Bitterness Units Scale). Both artistically well-crafted for a beer with this name, but even more impressive to reach both levels, if at all. With a beer featuring so precisely crafted around Heavy Metal’s 666 us rockers might expect to summon a beast.
But it is not only the impressive coincidence of the name given facts and the brewing results with its ABV and IBU that make this beer worthwhile, Highway To Ale is an impressive and richly hopped brew. The marriage of Amérisant (Brewer’s Gold) Hops from Matten’s Alsace region and the American Chinook hops is simply astounding. Fleurac and Matten state their brew is hopped diabolically (!!), another note that adds to the trivial concept and wordplays. 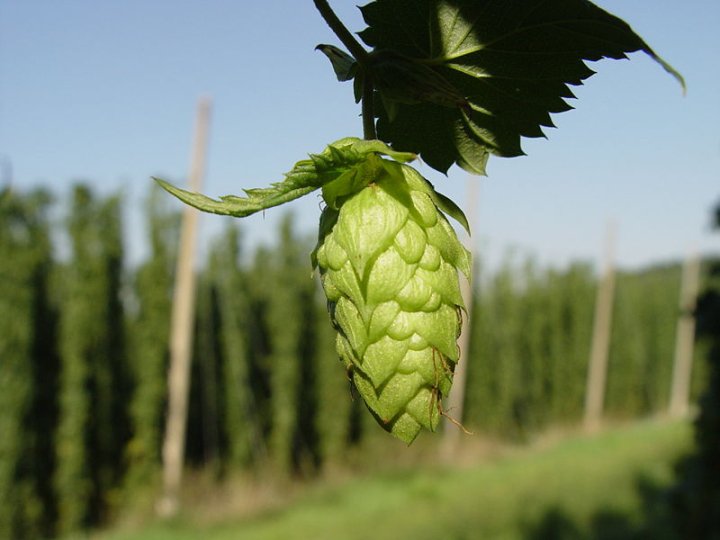 Heavily chilled I pop open Highway to Ale. Campfire crackling sparks dancing skybound, and music playing. Upon pouring it isn’t the light sparkling bright ale most expect. Highway to Ale pours with a brown hazy colour, and little copper shine and a thick foamy dense head. Not the most pleasant of sceneries but it adds to the dark gloom of the concept. More interesting however is its scent. The beer has a typical piercing sweet summery IPA scent to it. Bit piney, but overall very sweet.
The taste is rather surprising. This American-style IPA clings firmly around AC/DC’s tight riffage and flourishes with an overwhelming taste sensation. Chockfull of swirling bittersweet hops it packs great power, flattening out in what could easily be called a surprisingly daunting palate. When the sweet eruption of piney and lemongrass flavours settles and the bitterness takes over, it slowly reveals a malty character with sticky (dark) chocolate notes. Also, bitter indeed.
It’s taste also me reminds of Matten’s Imperial Black IPA, another complex tasting experience, that ebbs out with dominant espresso coffee flavours. Making it very enjoyable but pretty tough to immediately grow accomplished with, which also flies for this bomb of hops. In between the powerful bitter hops there’s coffee present and hints of liquorice. It is complex of its overwhelming eruption of unexpected dark flavours. It is harsh but mellow, much like AC/DC’s signature rock hymns. The dominant bitters as harsh as Bon Scott’s raspy sharp vocals. Notes swirling in its palate bridging towards Angus Young’s swirling fretboard magic. You just keep being surprised. 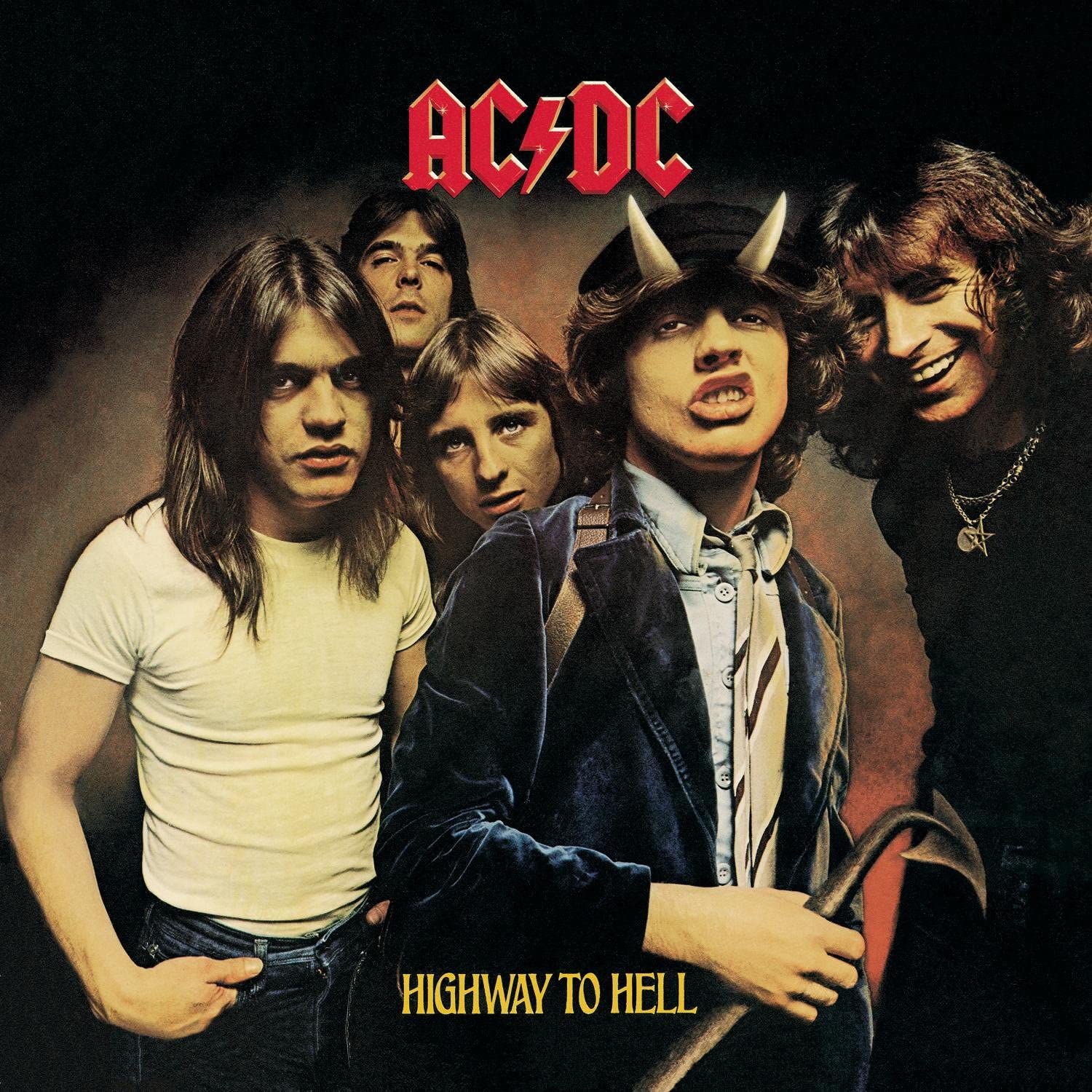 Tasting Highway to Hell I paired it with a Roquefort cheese for contrast, making the high bitter notes level out. It lined up well, although my move to add them to Chinese flavoured wings with red dipping sauce actually made it a match in Heaven. The sweet (bit spicy) red sauce paired perfectly with the beer’s intense flavours. Spot on as it was, this tasting became perfect when I spun the old `Highway to Hell’ vinyl, including all the noise and scratches. By the time I reach ,,Shot Down In Flames” I slam my second bottle at the campsite and when ,,If You Want Blood” blasts from my JBL speaker, I can’t withstand to start banging and singing along.

And that was not up everyone’s alley….