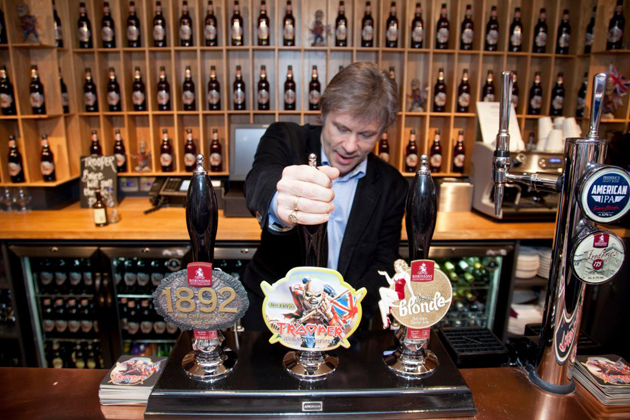 Walking around at the numerous beer-festivals sprouting all over the globe we cannot surpass the fact that the flavours and variety at hand reaches a wide audience, and above all: a rocking audience of devotees. Craft beer is rock ’n roll as much as craft beer is genuine. 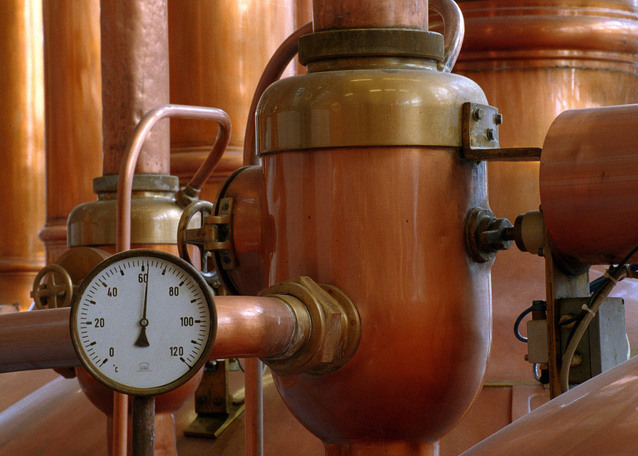 Much like the vast majority of people we as rock and metal heads are considered outcasts when it comes to taste and taste is not only our taste in (black) apparel and music. No, taste is what defines us rockers on all accounts! We have an extremely good taste when it comes to music. The wide array of genres might be sub divisional, but above all we are united under the hard rock banner as headbangers. We’re different and when it comes to festivals: we rock!
It is about music and food, beers and friends. It’s what our world evolves around. Festivals uniting hundreds of thousands like Wacken Open Air, Hellfest, Rock on the Range, and so on, are a lot bigger than the usual local beer fests, but it has one thing in common: taste.
We stroll around from boot to boot while music fills the background, classic rock favourable. Freshly tapped brews poor from taps and glasses are passed hand to hand to share tastes and opinions. We share our love for music as much as we share our taste for beers. When we bump into one another it is more likely that a friendship develops from the hit, rather than a fistfight. When beer is spilled due to this collision, we shuggle in despair, but the arm on the shoulder for comfort is honest as are the apologies. Glasses will be lifted and toasted.

With the changing landscape in music and taste we also see a quick development in taste on the market of craft beer. Cast aside the pilsners, we dive into the wide palette of tastes and diversity currently present on the market. Newly found craft breweries chip in enriching flavours, classic breweries lift along trying to cope with the sudden change of interest on the market. The shifting landscape of tastes and styles hails, whether we like it or not, from across the pond. Where the Belgian abbeys and Trappist breweries focused on quality and flavourish beers for ages, the American market flowered with extreme experiments enriching flavours.

In a large nutshell, and I’m likely to miss out on a lot in this introduction:
It all began with monks maintaining to brew beers more flavourish than other pilsner and lager breweries. Blond, Tripel, Double / dark beers and Quadruples for a long time where the standards to which taste was measured. Abbeys maintained a high quality and appeal worldwide with classic Trappist breweries, like Westvleteren, Chimay, Achel being benchmark and gaining an almost mythical status amongst lovers. The additional flavours are warm and rich as are the myths surrounding them. Westvleteren being the most highly acclaimed abbey of all.
England’s beer export overseas also added poise to the power. With taste fading from lagers, brewers on the isle added extra hops to maintain quality and durability of the beer enlarging their best before date. Pale Ale was born and with distribution of lagers to overseas army regiments, India Pale Ale (IPA) was born. On the other hand the Irish stuck to their unique Stout, the extremely (tar) black extremely flavourish beer from harshly roosted grains. German breweries have their Weissen beers and bock’s, with a development into Eisbocks as well. Blending all these rich flavours occasionally was rather a job for the monks throughout the centuries than for regular breweries focusing on the more promising and consumer friendly pilsners in large amounts.

In the late 20th century however, smaller US breweries started experimenting frequently enriching beers appealing to a wider audience. Especially IPA’s were attracting a wide array of people, not in the last place; women. The freshness from the hops made it an enjoyable summertime beer with the bitterness adding up to the joy of summer. Several types of hops were used all with their own unique pallet of tastes. Hopping was furthermore perfected and dry-hopping and extreme hopping flourished as brewing styles. The market slowly grew in demand and in the meantime US exports started to hit the European mainland. Belgian beers where still favoured by many, but got stuck in the traditional league. Saisons, fruit beers and Geuezes for instance, only were a small part of the market, which was gripped by the more traditional blondes, double, and Tripels, Belgian breweries made famous.
Cracking the market wide open were those unique American blends and styles, which started to gain interest overseas. It was the kick the European market needed to start experimenting themselves and hop on the bandwagon of beers. 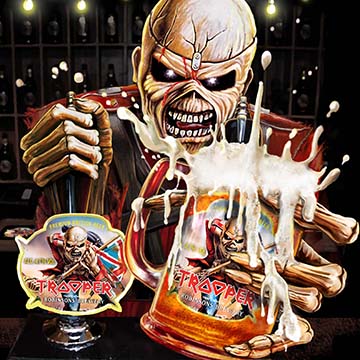 Craft beer breweries sprouted all over Europe adding up to the new movement of styles and blends. Craft beer became hot, with rockers taking the lead in the evolution of taste for extremity. Among my friends and fellow-rockers a lot of them are into craft beers and a few own their own breweries or work in one. It was only a matter of time before one of them actually combined forces with a band to create an ideal beer attracting the attention of fans.
Iron Maiden’s Bruce Dickinson has been an aficionado of English traditional Ale for a long time, occasionally visiting the Robinsons Brewery in Stockport, UK. When Robinsons, one of England’s oldest and most respected breweries, reached out to the vocalist opting to join forces and create a new and unique Ale, the charismatic shouter exploded in enthusiasm, Dickinson once said. Trooper Ale was born soon after and it is this beer that became a new stature in hard rock amongst fans of both, the band and craft beers.

It is because of this first step for metal heads and a giant leap for rock in general that I start my beer journey here:

IRON MAIDEN TROOPER ALE
English Ale
4.7 % ABV
Based upon the traditional English Ales, Trooper is slightly hazy amber/copper coloured English Ale with a nice puffy foam head topping it off in style. It looks radiant in the sun especially when it’s served up in the Trooper pint glasses.
The beer is tasty with a nice fruitiness and well-balanced citrus tinged hop bitterness. It’s fresh and enjoyable but the bitter taste fades rapidly, making it a rather thin and less lasting experience. The low carbonation doesn’t extend its life not does it add to the aftermath of its perfume. A flat liner that doesn’t flourish, unfortunately.
All in all the beer has a good taste and character but lacks the punch to make it stand out in the field of English Ales. It’s simply a bit too flat to enthuse me. Belting it down in a good go it does manage to capture the imagination.
On the other side, it’s a beer as metal as it can get with one of metal’s most favoured bands ever. With Eddie featured on the label in his Trooper gear, it still is a must have and must taste for all fans of the band and beer in general. More exquisitely graphic as Trooper Ale it can’t get!
Enjoy this one with the `Piece Of Mind’ album preferably with the name-giving track running at max volume from your speakers. It adds up nicely to the experience and revives the famous charge of the light brigade, which inspired Eddie’s Trooper art.

IRON MAIDEN TROOPER 666 (LIMITED EDITION)
Strong Bitter
6.60 % ABV
Unlike the big brother this limited edition is lighter in glance and leans towards orange – yellow in colour rather than the amber and copper. The heads is less solid but still nicely topping off the pint, although it fades faster. More based upon the bitterness of an IPA the beer is pretty light bodies but exquisite in taste. The hoppy nose is less present than the aroma of pear. Bit of a woody (barrel aged) sense comes into mind upon the first whiff. The hoppy undertone is a bit timidly present but balances out okay. Still the beer has less body even with the alcohol percentage being present and the subdued carbonation once again kills a long lasting and intriguing perfume, which this beer would have benefited from. Beers this flat simply don’t last as long as one would love. Again; a solid beer but not one flying high. It is best enjoyed with the more classic debut album spinning or `Number Of The Beast’ blasting from your speakers. And hell, for what it’s worth: `Tattooed Millionaire’ or `Balls To Picasso’ of Bruce Dickinson do fit this beer perfectly as mood setters. IRON MAIDEN TROOPER RED ‘N’ BLACK PORTER
English Porter
6.80 % ABV
Packing more power than its predecessors this Porter is the first outside the more classic Ale-range. Trooper Red ‘n’ Black Porter pours nicely with a thick and solid creamy head. It’s a classic styled Porter that reveals a pleasant roasted malt experience in both, taste and nose. The smell is a bit longer lasting than its taste but overall it packs more power than the other Troopers storming onto the pitch. The good thing about an English Porter is the licorice in its taste and the coffee-like aftertaste that lingers onwards. It does fade rapidly like the taste of its brothers due to the light carbonation used, but it has a pleasant warm roasty taste. The Porter is more enjoyable depending on your taste, but it most certainly adds up better to the bands darker (crawling) hymns as played on the mighty `Powerslave’ record. 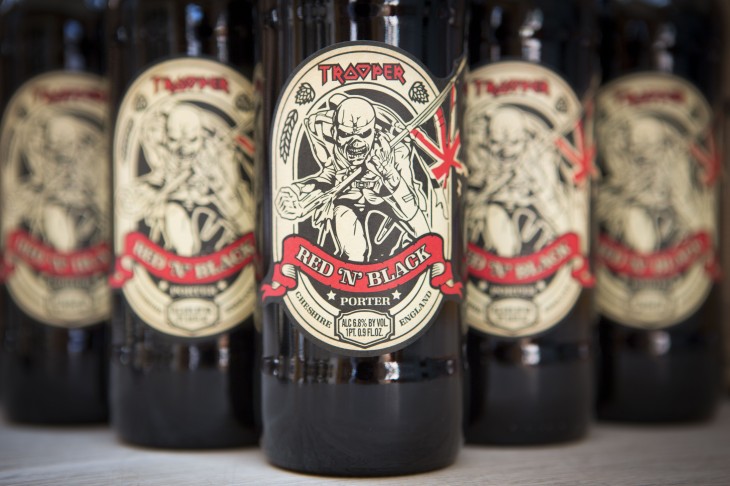