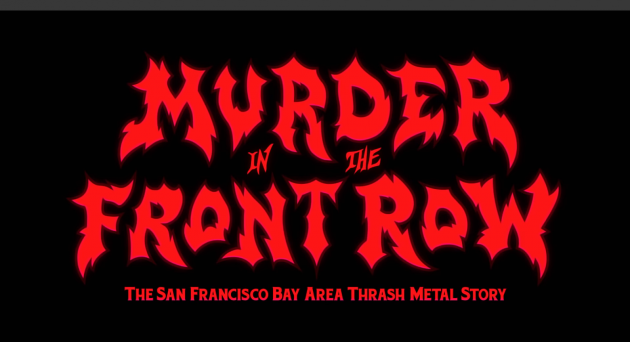 “It’s not just a film about heavy metal. It’s about people. It’s hard music with a warm, fuzzy beating heart.” Adam Dubin set out to chronicle the ‘80s Bay Area thrash scene in ‘Murder In The Front Row — an uncensored and boisterous documentary set for release early in 2019.

And ‘Murder In The Front Row’ is certainly a must-watch for hard rock fans; the film contains over fifty interviews with various metal stalwarts (including Metallica, Megadeth, Slayer, Anthrax, Exodus, Testament and Death Angel), telling its tall tales through a mix of first-person interviews, animation and narration by comedian Brian Posehn.

AARDSCHOK presents a special screening including Q/A with Director Adam Dubin on September 17th, 2019 in:

Tickets are 12 euro, which you can order HERE
There are only 119 seats available. In case it’s sold out, there will be an extra show on Wednesday September 18th.

PLOT
Murder In The Front Row: The San Francisco Bay Area Thrash Metal Story. In the early 1980’s, a small group of dedicated Bay Area headbangers shunned the hard rock of MTV and Hollywood hairspray bands in favor of a more dangerous brand of metal that became known as thrash! From the tape trading network to the clubs to the record stores and fanzines, director Adam Dubin reveals how the scene nurtured the music and the music spawned a movement. Murder In The Front Row is told through powerful first person testimony and stunning animation and photography. The film is a social study of a group of young people defying the odds and building something essential for themselves. Featuring interviews with Metallica, Megadeth, Slayer, Anthrax, Exodus, Testament, Death Angel, Possessed and many more!