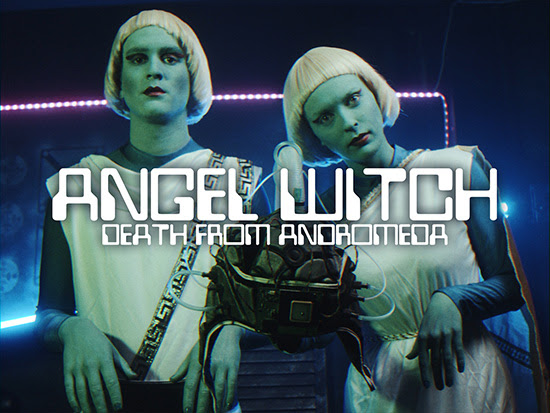 For the track ,,Death From Andromeda''

In the wake of their brand new album, `Angel Of Light’ – already being described by some as the band’s finest work since the legendary debut – Angel Witch are proud to present their first bona fide music video since their eponymous single nearly forty years ago: the incendiary and extraterrestrial-themed ,,Death From Andromeda”.

The handiwork of the Brighton-based production team Wild Stag Studio, this six minute piece forms a homage of sorts to the sci-fi and horror dreamworlds that have haunted the collective subconscious and fired the imagination of the band since its earliest incarnation.

Even before the day in 1979 when Kevin Heybourne used the recently viewed Alien as inspiration for the hellish guitar noise that kicks off “Baphomet”, the mystical aural landscapes that Angel Witch creates had always been heavily informed by futuristic dystopias, dark mythos and the kind of culture oft found in yellowing paperbacks, midnight movie screenings and on the flickering of small-hours television.
What’s more, whilst recording `Angel Of Light’ in early 2019, the band were holed up together for three weeks in an AirBnB in Leeds, and found themselves spending most of their time in the evenings watching movies and TV, which naturally gravitated towards grand guignol horror and old-school sci-fi – from classics like ’60s Star Trek and the Hammer House Of Horror series to celluloid escapism from the sublime (The Devil Rides Out) to the ridiculous (Lair Of The White Worm).

,,Death From Andromeda” (with its lyrical influence drawn from the Michael Crichton 1969 novel The Andromeda Strain) reflects all these obsessions and more, a gloriously outlandish and suitably OTT journey into the trash and terror of the past, invoking the timeless headspace of eternal favourites like kitsch classic Barbarella, the fantastically overblown 1980 remake of Flash Gordon, the famously overambitious Starcrash, and the dark low-budget majesty of ’70s British classics such as Space 1999 & Dr. Who (with particular reference to the Tom Baker-era story Planet Of Evil).

To stream `Angel Of Light’, head over to: metalblade.com/angelwitch – where the album can also be purchased in the following formats:

* exclusive bundles with shirts, plus digital options are also available!

Angel Witch’s current line-up is comprised of Kevin Heybourne (vocals, lead guitar), Jimmy Martin (rhythm guitar), Will Palmer (bass), Fredrik Jansson Punkka (drums) – the nucleus of which (Heybourne & Palmer) first formed eleven years ago, delivering 2012’s critically acclaimed album, As Above, So Below. This time around, the band went to the Stationhouse in Leeds (UK) to record ‘Angel Of Light’ with producer James Atkinson (Gentleman’s Pistols/Voorhees). The result is a revelation; Angel Witch is reborn and more powerful than ever, retaining every iota of the melodious finesse and metaphysical intrigue that elevated them above their contemporaries from day one.
— Angel Witch Online:
Facebook here
Instagram here
Twitter here
Website here