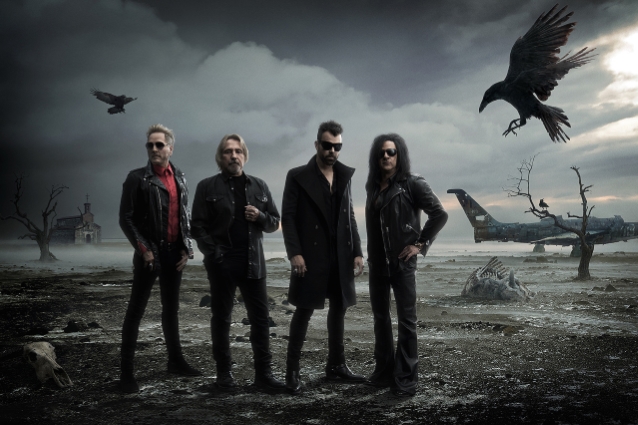 DEADLAND RITUAL is the brainchild of Matt Sorum, who stated about the band’s formation: “Steve [Stevens] and Franky [Perez] were the first guys I called. We knew we wanted to create a heavier rock sound, but when I contacted Geezer [Butler] and he agreed to play, I knew this could be a great band. Not long after we connected with producer Greg Fidelman, DEADLAND RITUAL was born.”

The song, which was produced by Greg Fidelman (METALLICA, SLIPKNOT) was released via Sonik Riot Records/AWAL powered by Kobalt.

Butler said about his involvement in the project: “I was working on a new solo album when this came to light. It was appealing for me to work in a band environment because that’s what I’m used to, so [it] feels really natural. I’m really looking forward to playing shows with these guys.”

Stevens talked about his first studio session with Butler, explaining: “There’s a lot of times in the studio as a guitar player, you get a guitar sound and you’re trying to make it work, tweaking it. There was none of that bullshit. It just fit against his bass sound and it was really exciting to me. I get to hear my guitar against a bass guitarist that I’ve idolized forever.”

DEADLAND RITUAL will make two European summer festival appearances next June — Download in the U.K on June 14 and Hellfest in France on June 22. Prior to those concerts, they will continue writing and recording, releasing singles along the way and perhaps a full-length album. According to a press release, the live shows “will be something special, mixing the original material with deeper cuts from their collective past.”