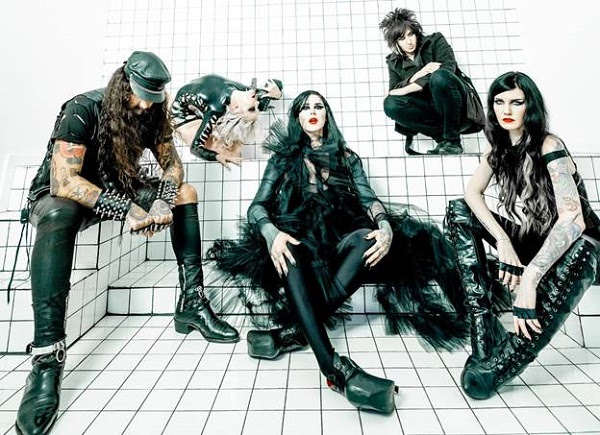 KAT VON D EXPLORES LOVE, LOSS AND HEALING IN CATHARTIC VIDEO FOR ,,I AM NOTHING”

Multifaceted tattoo artist, TV star, beauty entrepreneur, author, fashion designer, and singer/songwriter Kat Von D continues her musical journey with the cathartic new video for her synthwave slow jam, “I Am Nothing”, the second single from her forthcoming debut album ‘Love Made Me Do It’, due for release on August 27. Watch “I Am Nothing’” video  here– Pre-order “Love Made Me Do It” here.

The video, directed by Linda Strawberry, captures the essence of the song and the album’s underlying themes of love, loss, and loneliness. Kat Von D explains: “It’s about the idea of not being good enough. You feel like you’re nothing and lament the memories of the past again. It’s the everyday challenge of putting one foot in front of the other when you’re running on emotional fumes. You’re also coming to terms with the fact it’s over”. Regarding working with the director, Kat says: “Working with Linda Strawberry on this video was a beautiful experience. I was already so inspired by all the work she’s done with the Smashing Pumpkins art direction as well as other music video projects she had beautifully directed”.

“The music video was inspired by the sentiment of isolation and how it relates to feeling alone within a relationship”, Kat says. “So if you notice, everyone in the video is confined to their own space the entire time. The set for the band’s performance scenes had 8-foot tall crucifixes made of mirrors that stood behind each band member, while walls separated each member from one another. So at no point could they see what the other person was doing. I wanted to give the feeling of opening an antique wind up box and seeing that tiny ballerina spinning around”.

“I Am Nothing” follows the album’s lead single “Exorcism“, which Billboard described as “a darkwave bop about love, loss and change”. Altogether, the songs on “Love Made Me Do It” comprise a soundtrack for the lovelorn that puts all of Kat’s soul and extensive classical training front and center. “‘Love Made Me Do It’ is a collection of all my hopeless romantic thoughts poured into one album”, she states.

Both videos for “Exorcism” and “I Am Nothing” feature Kat’s band – Gregg Foreman AKA Mr. Pharmacist (synth 1/Cat Power, The Gossip), Sammi Doll (synth 2/IAMX), Dave Parley (drums/Prayers), and Brynn Route (contortionist). Additionally Kat is supported by an impressive array of collaborators on “Love Made Me Do It”, including Dave Grohl, Linda Perry, Dave Sitek (TV On The Radio), Peter Murphy (Bauhaus), Danny Lohner (Nine Inch Nails), Ladyhawke and Charo.

“With anything I’ve ever created, I always hope audiences enjoy the final product”, she leaves off. “The music should speak for itself. I’ve spent years tattooing lyrics, album covers, band logos, and song titles on people. I hope this music translates on the same level to listeners”.
The pre-order of “Love Made Me Do It” includes limited edition signed red vinyl, red cassettes, CD digipack, hoodies with Kat’s signature star face tattoos on the hood, custom sketchbooks and much more. Other limited edition color vinyl variants are also available for retail.

Long before the history-making tattoos, ubiquitous television shows, best-selling books, and influential beauty empire, Kat Von D sat down at a piano for nearly two hours a day and played. In essence, music became her first creative language and most trusted outlet. Classical training and a deep appreciation for music of all genres essentially underscored her life. She studied voice under Ken Tamplin six days per week, strengthening her vocals. In 2012, she began writing with GRAMMY® Award-nominated legend Linda Perry.

Following this experience, Kat continued to write on her own, sitting at the piano and summoning songs from raw emotion. During 2014, she retreated to London to record the original mix of what would become her full-length debut album “Love Made Me Do It” (KVD/Kartel Music Group)before cementing it with her band – Gregg Foreman AKA Mr. Pharmacist (synth 1), Sammi Doll (synth 2), Dave Parley (drums), and Brynn Route (contortionist). They moved into a bungalow cottage on her property, lived together, and finished the record. Capping off the process, Dan Haigh of Gunship handled mixing. A pastiche of shapeshifting analog synths, post-punk dreamscapes, gothic hues, and shy pop magnetism, these eleven songs echo the eternal will of the perennially brokenhearted to love until death. It’s highlighted by standouts such as the first single “Exorcism”, “Protected” featuring Peter Murphy of Bauhaus and produced and co-written with Danny Lohner (Nine Inch Nails, A Perfect Circle), and “The Calling” capped off by never-before-heard recordings from original scream queen Vampira.