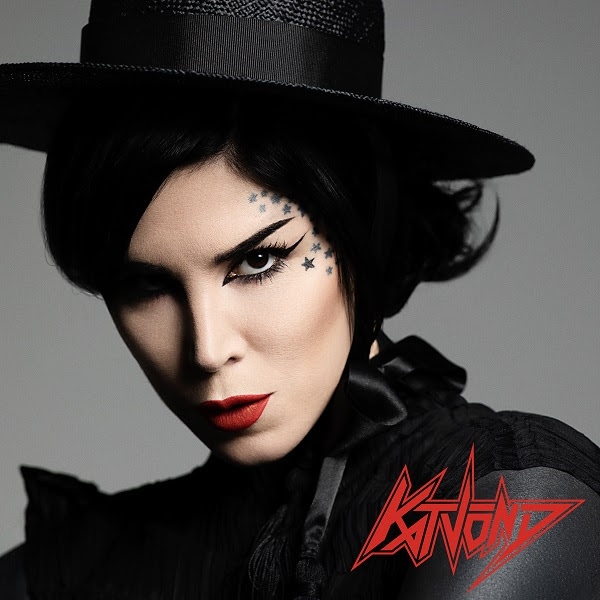 Debut album `Love Made Me Do It’ out August 27th.

Watch the lyric video for ,,Fear You” here:

Listen to ,,Fear You” HERE

Pre-order the album `Love Made Me Do It’ HERE

On the track, impassioned paranoia seeps through the cracks of her delivery as she details “being scared to let yourself fall in love” bathed in a gorgeous retro soundscape laced with instantly recognisable 808 drums. Lyrically, the track explores trust, self-exploration and the concept of overcoming your inner fears when it comes to fully committing your heart to a loved one. Written with Linda Perry, the single was produced by Kat and her band members Gregg Foreman AKA Mr. Pharmacist (synth 1), Sammi Doll (synth 2) and Dave Parley (drums).

Talking about the track Kat says: “this was originally my favorite track. It still might be! I chose it to be the fifth song, because five is my favorite number. Lyrically, it’s about how you can’t lose if you don’t play. You’re so scared of taking the leap and trying, because you assume you’re going to fail. I was in a relationship where we were too scared to make it real. It was self-tormenting. You’re building it up to fall apart. You want to know someone wholeheartedly, but that would require you to get over your fear. You just won’t”.

The new cut follows on recently released singles, the driving darkwave laced ‘Enough’, the vulnerable synthwave slow jam, ‘I Am Nothing’, which found the talented artist at her most intimate and vulnerable, and the debut single ‘Exorcism’ – defined by Billboard as “a darkwave bop about love, loss and change” – which unveiled the album’s recurring theme, in Kat’s own words: “‘Love Made Me Do It’ is a collection of all my hopeless romantic thoughts poured into one album”.

‘Love Made Me Do It’ sits at the core of Kat’s universe, proving that music is her first and strongest passion. Having been a classically trained pianist since her youth with a deep appreciation for music of all genres, Kat poured her soul into this long-awaited full-length debut album. The project features collaborators including Dave Grohl, Linda Perry, Dave Sitek (TV On The Radio), Peter Murphy (Bauhaus), Danny Lohner (Nine Inch Nails), Ladyhawke and Charo.

Long before the history-making tattoos, ubiquitous television shows, best-selling books, and influential beauty empire, Kat Von D sat down at a piano for nearly two hours a day and played. In essence, music became her first creative language and most trusted outlet. Classical training and a deep appreciation for music of all genres essentially underscored her life. She studied voice under Ken Tamplin six days per week, strengthening her vocals. In 2012, she began writing with GRAMMY® Award-nominated legend Linda Perry.

Following this experience, Kat continued to write on her own, sitting at the piano and summoning songs from raw emotion. During 2014, she retreated to London to record the original mix of what would become her full-length debut album ‘Love Made Me Do It’ (KVD/Kartel Music Group) before cementing it with her band – Gregg Foreman AKA Mr. Pharmacist (synth 1), Sammi Doll (synth 2), Dave Parley(drums), and Brynn Route (contortionist). They moved into a bungalow cottage on her property, lived together, and finished the record. Capping off the process, Dan Haigh of Gunship handled mixing. A pastiche of shapeshifting analog synths, post-punk dreamscapes, gothic hues, and shy pop magnetism, these eleven songs echo the eternal will of the perennially brokenhearted to love until death.

It’s highlighted by standouts such as the first single ‘Exorcism’, ‘Protected’ featuring Peter Murphy of Bauhaus and produced and co-written with Danny Lohner (Nine Inch Nails, A Perfect Circle), and ‘The Calling’ capped off by never-before-heard recordings from original scream queen Vampira.