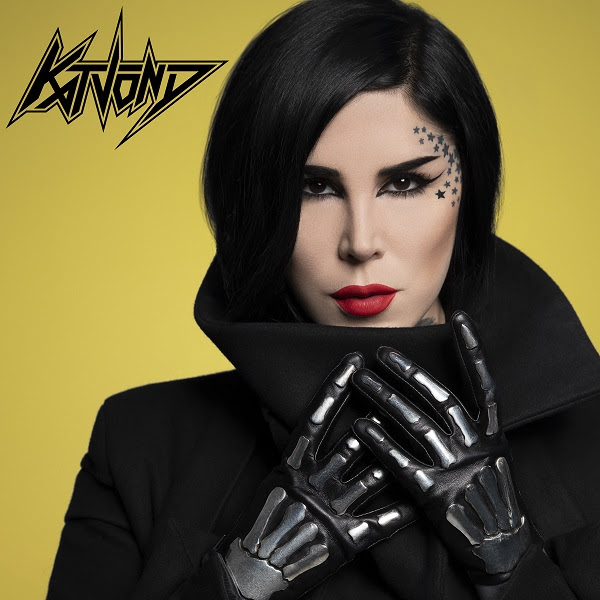 Gifted multi-hyphenate Kat Von D shares driving dark wave laced single ‘Enough’, the third track from her forthcoming debut album, ‘Love Made Me Do It’, due August 27th and available for pre-order now. The pre-order of ‘Love Made Me Do It’ includes limited edition signed red vinyl, red cassettes, CD digi pack, hoodies with Kat’s signature star face tattoos on the hood, custom sketchbooks and much more. Other limited edition colour vinyl variants are also available for retail.

PRE-ORDER THE ALBUM `LOVE MADE ME DO IT’ HERE.

‘Enough’ is an ode to lost lovers in which Kat continues exploring the darkest angles of an unhealthy relationship. The new cut follows on recently released singles, the vulnerable synth wave slow jam, ‘I Am Nothing’, which found the talented artist at her most intimate and vulnerable, and the debut single ‘Exorcism’ – defined by Billboard as “a darkwave bop about love, loss and change” – which unveiled the album’s recurring theme, in Kat’s own words; “‘Love Made Me Do It’ is a collection of all my hopeless romantic thoughts poured into one album”.  Talking to American Songwriter, Kat revealed; “it’s being able to dip into those feelings of codependency or craziness but not actually live in it. Although most of the songs were written during a time of depression, that’s definitely not where I want to live, but there’s a beauty and vulnerability and a strength to that as well. I’m not ashamed of writing out my faults. I’m so full of them”.

Talking about the new single, Kat reveals; “It was written by Chris Brenner, Danny Lohner from Nine Inch Nails introduced us. They’d actually worked on the song together, but they’d never done anything with it. It’s one of only two songs I didn’t write on the album. When I talked to Chris about it, he said, ‘That was my big breakup song’. The intro lyrics are, ‘Dove down to the bottom of the dark blue sea searching for any traces that are left of me’. I love that idea. You tend to lose yourself in relationships – good and bad. You’re reflecting on your part and why you stuck around. It attests to our willingness to stay in shitty relationships”.

LOVE MADE ME DO IT

‘Love Made Me Do It’ sits at the core of Kat’s universe, proving that music is her first and strongest passion. Having been a classically trained pianist since her youth with a deep appreciation for music of all genres, Kat poured her soul into this long-awaited full-length debut album. The project features collaborators including Dave Grohl, Linda Perry, Dave Sitek (TV On The Radio), Peter Murphy (Bauhaus), Danny Lohner (Nine Inch Nails), Ladyhawke and Charo.

During 2014, she retreated to London to record the original mix of what would become her full-length debut album ‘Love Made Me Do It’ (KVD/Kartel Music Group) before cementing it with her band – Gregg Foreman AKA Mr. Pharmacist (synth 1/Cat Power, The Gossip), Sammi Doll (synth 2/IAMX), Dave Parley (drums/Prayers), and Brynn Route (contortionist). They moved into a bungalow cottage on her property, lived together, and finished the record. Capping off the process, Dan Haigh of Gunship handled mixing. A pastiche of shapeshifting analog synths, post-punk dreamscapes, gothic hues, and shy pop magnetism, these eleven songs echo the eternal will of the perennially brokenhearted to love until death.