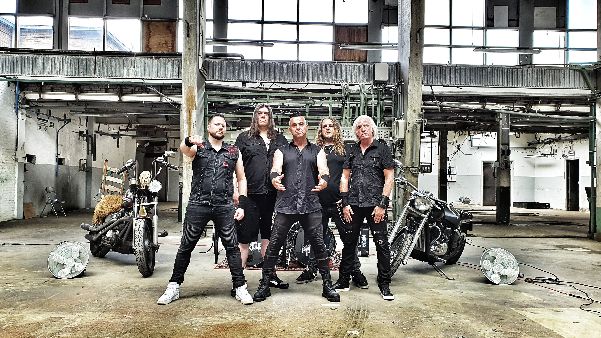 Dutch metal legend Martyr released a brand new single and video.
The song is called ‘Fire Of Rebellions’, a heavy pounding brutal track. This video and song was created with a contribution of around 100 MARTYR warriors from all over the world.

The song will be released through all relevant online streaming services as well as a limited edition CD-single by PT-78 Records and Rock Stakk Records (Japan). This CD single will also feature the previous epic power ballad and highly acclaimed “No Time For Goodbyes”.

HeadBangers LifeStyle asked guitarist and founder Rick Bouwman for a comment and this is what he has to say:
,,This single is the 2nd release of the songs we are writing for the new MARTYR album. After the epic power ballad “No Time For Goodbyes”, of course we come up with a heavy pounding song that feels like a thundering train, racing from your speakers. This song was also recorded during the Covid-19-time in our home studios and our own practice studio, produced by our drummer Rick Valcon, who really made it into a pounding unity.
The idea to get fans to work on both the song and the video clip actually came about because the song was first called “WAR” and we wanted shouts for that. We can shout that out ourselves, but what could be more fun than doing something similar with fans? That will also have a great effect live. It’s almost a spell that fits MARTYR as we notice ,“WARRRRRR”.
So we made a call on social media and about 100 people submitted a video. The sound is used for the song and the images for the new video clip. If you think about it that way, it is also appropriate for this time, more than 100 people in your clip but at a social distance [laughing].
An additional advantage is that everyone who has contributed will share that song and video so we have a nice long range with it, and this song deserves it. I am very satisfied with the end result and how we put it together.
On to the next I would say!”
—