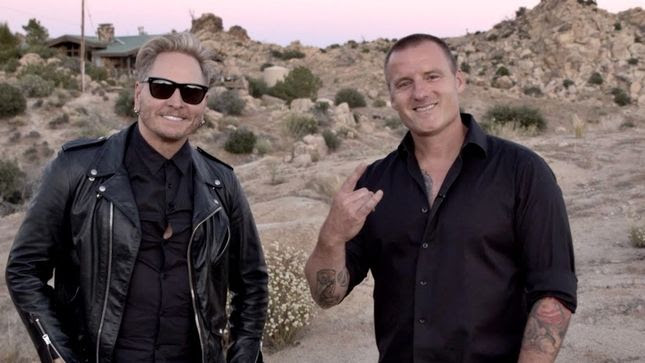 They know each other since many years – and you realise that quickly when watching the first two episodes of the „A Dialogue In The Desert“ video series: Ocean Hills frontman Zoli Teglas (ex-Ignite) and Matt Sorum (ex-Guns’n’Roses/Velvet Revolver/The Cult).

Now, episode 3 of their interview series has been launched, delivering an interesting angle on the creation of Metallica’s „Black Album“. Why’s that? Find out now!

“I just want us to be known as Working Class Rock N’ Roll”, so says vocalist Zoli Teglas (ex-Ignite), having taken 30 years’ worth of experience in the music business to launch a project close to his heart, Ocean Hills. Born into a working class Hungarian family, a dedicated animal rights / rescue activist, and a Hollywood actor with supporting roles in “Terminator: Dark Fate” and “The Alienist” under his belt, Teglas learned the value of hard work at a young age and the relationship music played in it. And it was always rock n’ roll. Bands like Journey, Boston, The Who and Led Zeppelin are only a few examples of the artists that laid the groundwork for Teglas’ current artistic vision: to write songs for the working-class man in the vein of acts like Shinedown, Nickelback, and Alter Bridge. Lead-off single “A Separate Peace” released in April 2020 – is proof positive of the Ocean Hills no-bullshit approach to making their own brand of rock, with the stunning Death Of Liberty” as the infectious follow-through. The title song, “Santa Monica” was chosen as third single, followed by “Bound”, which was co-written by Bush guitarist Chris Traynor.
—
HeadBangers LifeStyle review `Santa Monica’ here