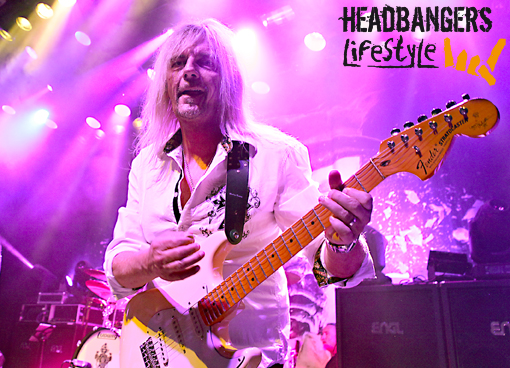 The club is packed while the dB meter occasionally taps the critical 103 in red. Dutch regulations enforce this limit but it proves to be sufficient to limit volume of metal concerts like today. The sizzling atmosphere of the cozy Bosuil club in Weert isn’t affected by the meter on the ceiling nor is the enthusiasm of the bands onstage. Tonight’s package is one that rolls through Europe and sells out frequently. Germany’s number one guitar ace Pell and his band embark on a new tour to celebrate metal. Festivals and clubs all over the continent are treated their share of Pell classical heavy metal.

Opening up for Axel Rudi Pell are chart stormers Lords Of Black, the band around master shredder Tony Hernando (Saratoga) and drummer Andy C. But it was not until Mr. Blackmore recruited their vocalist Ronnie Romero for his Rainbow revival tour that the band’s career gained momentum. Tonight they prove their power with a short and blistering setlist focussing on their 2016 release ‘II’. Their melodic blend of power metal is  welcomed by the crowd. ,,Merciless” is the perfect opener for tonight leaning strongly on the shoulders of Hernando. He throws around his riffs with the utmost precision, making jaws drop when his fingers fly over the fret board. The progressive and symphonic feed that drives their sound makes the band stand out in todays masses. ,,Nothing Left To Fear”, ,,New World’s Coming” and ,,Ghost Of You” are in hindsight of perfection. Powerful pulled forward by Andy C’s energetic drumming the band’s gig is gloryful with Romero shining brightly. Powerful voice and tons of charisma even though Ronnie is severely limited due to the fully packed stage. Stuck to his square 3 feet he shines brightly. Working hard to overrule the massive wall of sound. His interaction with the audience makes tonight memorable while peaking during the jawdropping performance of ,,Everything You’re Not”. The power ballad is pumped to it’s absolute maximum. Lords Of Black is rewarded with an unplanned encore. A coverversion of ,,Neon Knights” ends tonight’s triumphant performance.

When the lights dim tension starts to rise. Axel Rudi Pell and his band take the stage leaving no stone untouched tonight. Their setlist is build upon the foundation of his long spanning career and it’s a celebration of heavy metal in it’s purest form. I have to admit that I haven’t seen Herr Pell enjoying himself as much as this night. Axel is the guitar virtuoso that is out of the ordinary. Where most take the spotlight to display their impressive fretboard magic, Axel is rather timid and keeps a low profile even though he is the name giver and driving force of the band. Rather unusual indeed, but tonight Axel plays a totally different game. He takes the spotlight during his solos, but he also is in touch with his fans that came in from all over the continent. Inspired versions of his many classics come by in high gear with his band delivering their best. Whether it’s the old school classics like ,,Bad Reputation” or ,,Masquerade Ball”, or live crackers such as the brand new ,Game of Sins”. Everything tied together by the typical shreds and sound of Pell’s impeccable style the classic melodic metal also featured the ominous overall keyboard sound that is Doernberg’s trademark. His interaction with the master is precise and it is the stronghold of their unique sound. The band’s backbone is formed by long time member Volker Krawczak’s whoms ploughing bass are lined up perfectly with the rock solid groove of one of rock’s greatest drummers of all time: Bobby Rondinelli (Rainbow, Black Sabbath, etc). The newest member of the ARP family took over the stool of the explosive Terrana and plays a different game. His soulful and powerful groove lines up perfectly and breathes the grandeur of the classic heydays of rock and metal. The band just oozes perfection tonight and the fans celebrate with them. The damp and brooding atmosphere of the packed club is just excellent for this classic rock outburst. The amazing power ballad ,,Oceans Of Time” is spot on and ,,Mystica” is powerful and passionate. It also proves the vocal strength of one of rock’s best kept secrets; vocalist Johnny Gioeli (Hardline). The man is blessed with a wide range and powerful vocal chords that fire under pressure. He belts the most impressive chats and choruses as if it’s nothing out of the ordinary.

Where Romero was limited in his moves, the explosive Gioeli creates waves constantly. His energetic stage presence is fierce and powerful, and this man is hard to hold down. He plays his A-game as he’s creating tons of turmoil feeding off of his fans’ energy. He screams and shouts while running around. Gioeli is the perfect frontman for the band that is literally on fire tonight. The sound is superb as is the setlist and the energy of the band. Front to back this band radiates while fans have their fists flying high all night. It’s a celebration of music and metal in general by one of the better live bands in the field. 25 years recording and touring, Axel and his band are yet to remain discovered by the masses. Time has come….

—
All photos by Edwin van Hoof