With his new band The Nine surrounding him, Saviour Machine’s Eric Clayton reports back for duty after a hiatus of well over fifteen years, the last sign of life being his liner notes to the “Synopsys” compilation released by Massacre Records. He then soon found himself in darker places diagnosed with Barrett’s Esophagus, a marriage gone bad, and eventually stepping away from day to day life as we know it. After countless efforts however, Eric found himself performing with Ayreon at his celebrated `The Theater Equation’ [2015] infusing Clayton with inspiration, rediscovering the inspiration to set free his energy and musical creational spree. Thus Clayton packed up, moved to Europe to live with his newfound love, and soon found himself back on stage with a new band. 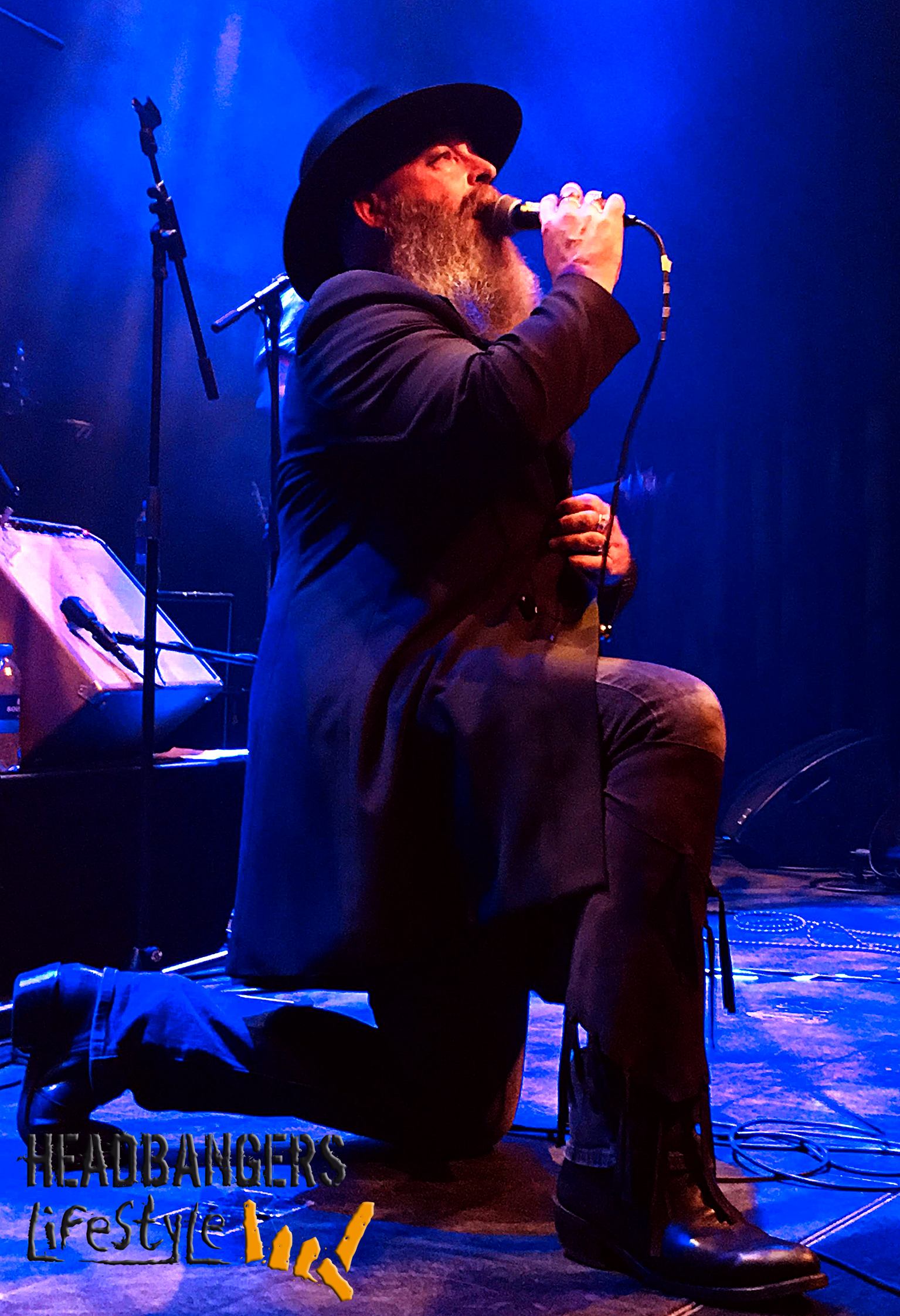 Tonight’s the first night of an announced tour bringing Eric Clayton back to the spotlight under the new moniker Eric Clayton & The Nine. A try out gig at Heerlen’s De Nieuwe Nor, which for the occasion is packed with fans and friends of the band. In front of the intimacy they take the stage for a dive into Eric’s history and his influences. With The Nine consisting of seasoned musicians with a long career on [mainly] the Dutch stages, Clayton is backed with a solid cast to dive into this new endeavour, as they open with The Beatles’ ,,Helter Skelter”, perfectly fitting tonight’s atmosphere. Back is the well-known masque worn by the band members during the opening, often spoken to during Clayton’s performance re-enacting the lyrical content. His deeply spiritual lyrics enhanced by his dialogues with the mask and the higher powers. It takes fans and friends back to the band’s `Live in Deutschland’ era and their powerful performances. It is the upbeat to a magical night with a high sense of recognisability as Eric and his Nine move through a set list consisting of Saviour Machine classics, lesser known David Bowie songs and Lou Reed and Bob Dylan hymns, all drenched in the symphonic gothic well of Saviour Machine’s typical sound. ,,Christians & Lunatics” and ,,Killer” still bear the mark of the band’s grandeur. The typical heavy outbursts outlined by theatrical and ambient piano and guitar interaction are well preserved by his new band. With spotlights on Jeroen Geerts’ enduring clean solos hovering in between Clayton’s vocal lines and Ludo Caanen’s piano swirls, The Nine ignites the spark of Saviour Machines many classics. With the carcass of the songs intact, Eric and his band also injected some stunning renewals as they changed the songs’ pace or spiced up the orchestration, leading to many Goosebumps-moments. Powerful and mostly rearranged renditions of his band’s songs such as an intimate and ambient version of ,,Carnival Of Souls” and an impressively orchestrated ,,Enter The Idol” follow. When the band moves onto their “Bowie/Decade”, the audience is already won over. ,,Look Back In Anger”, ,,Breaking Glass”, a warm version of ,,Five Years” and the stunning ,,Quicksand” are performed with panache and Eric Clayton draws up his best performance to pay tribute to his main influencer as an artist; the late David Bowie. His low registers are impressive and his loud echoing bursts have stood the test of time. On top his performing skills and captivating personality are still unique and captivating, as is the evocative lyrical controversy Clayton drew up amongst the Christian metal scene, with his intensions misinterpreted by many. 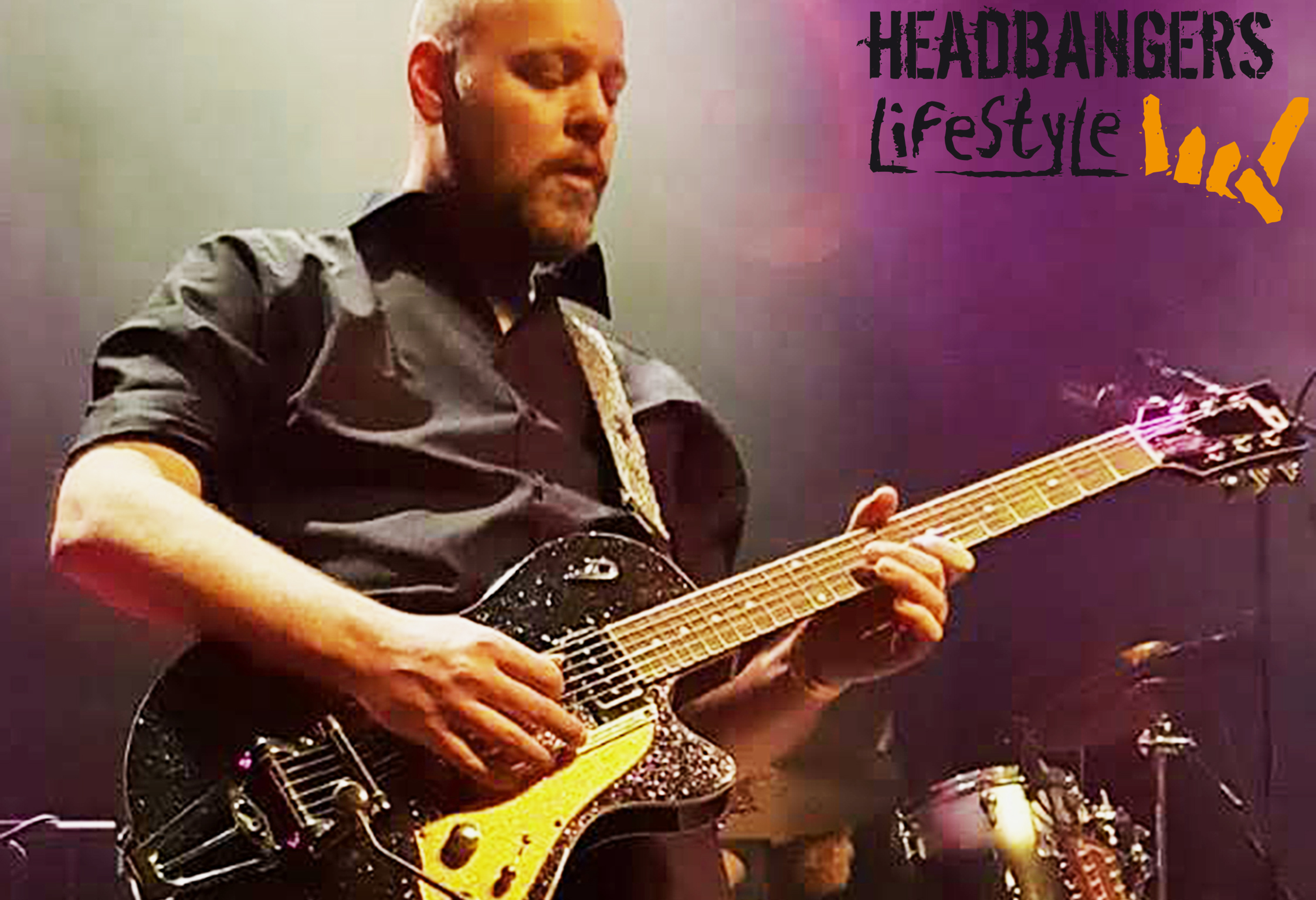 ,,The Mask”, and the gospel critical cynicism in ,,Ascension Of Heroes” all stood the test of time and still sound uniquely intriguing and captivating. Surprises are intimate versions of the piano driven ,,Child In Silence” and the epic ,,Son Of The Rain”, last performed in 1993. Both create a perfect ambiance for Lou Reed’s ,,Perfect Day” played on ukulele played by bassist Rob Dokter. The song fits the set perfectly with Eric’s warm tenor and deep baritone to basso vocals injecting the song with the typical Saviour Machine ingredients utilizing it with lamenting near cinematic emotion. Dylan’s ,,I Shall Be Released” receives the same [S.M.] makeover and benefits from the welling emotions implemented. It’s a bold exclamation point after which Eric Clayton & The Nine leave the stage to return shortly after under loud applause of the nearly sold-out venue. Ending the night gracefully the Nine once again delve from Saviour Machines catalogue with the here aformentioned ambient ,,Carnival Of Souls”, to pace up for a grand finale with a sped up version of the romantic yet dark ,,Legion”, and the ravishingly beautiful ,,Love Never Dies” concluding the performance in withering beauty. 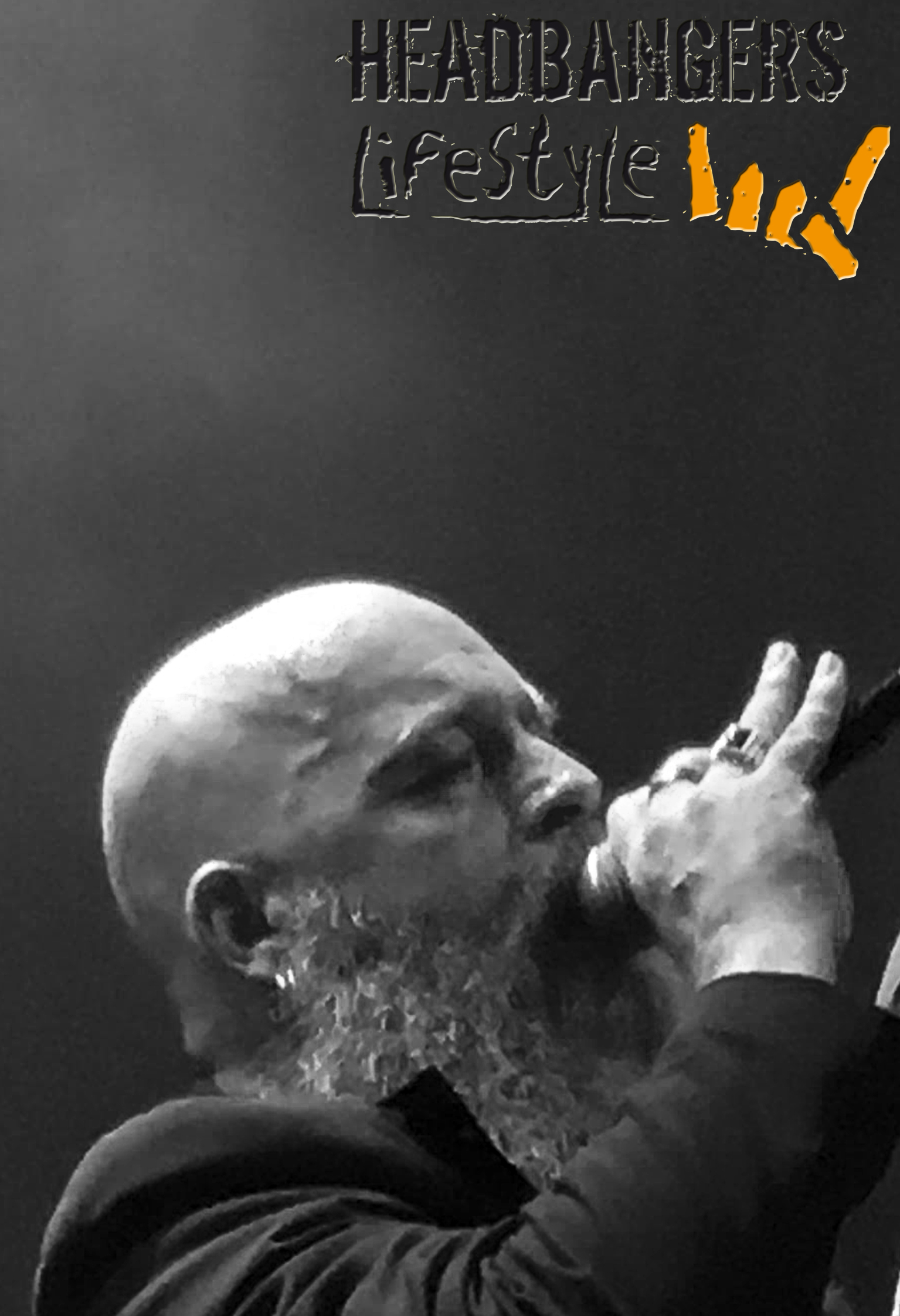 Far from flawless the band put up an impressive and inspiring gig. The guitar tandem of Bas Albersen and Jeroen Geerts was spot on, as was Ludo Caanen’s enticing keyboard and piano playing. Even more impressive was Twan Bakker’s drumming reviving Saviour Machine’s powerful progressive tones easily, with Dokter’s pumping bass lines further inflating the song’s rock solid foundation. But tonight was all about the return of Eric Clayton, one of rock’s most impressive vocalists echoed like in the old days and nested into the hearts and soul of all present with a captivating and honest performance. Discarding the `Legend’ – trilogy, Eric Clayton focussed on the band’s most compelling shorter tracks wisely. A celebration of Clayton’s acclaimed debuting days, in line with (t)his triumphant return.
“…Break the Heart and lash the Skin”, Eric Clayton announces in ,,Love Never Dies” and quite positively; Eric Clayton & The Nine did just that during this impressive atmospheric gig.
—
Photos by Edwin van Hoof