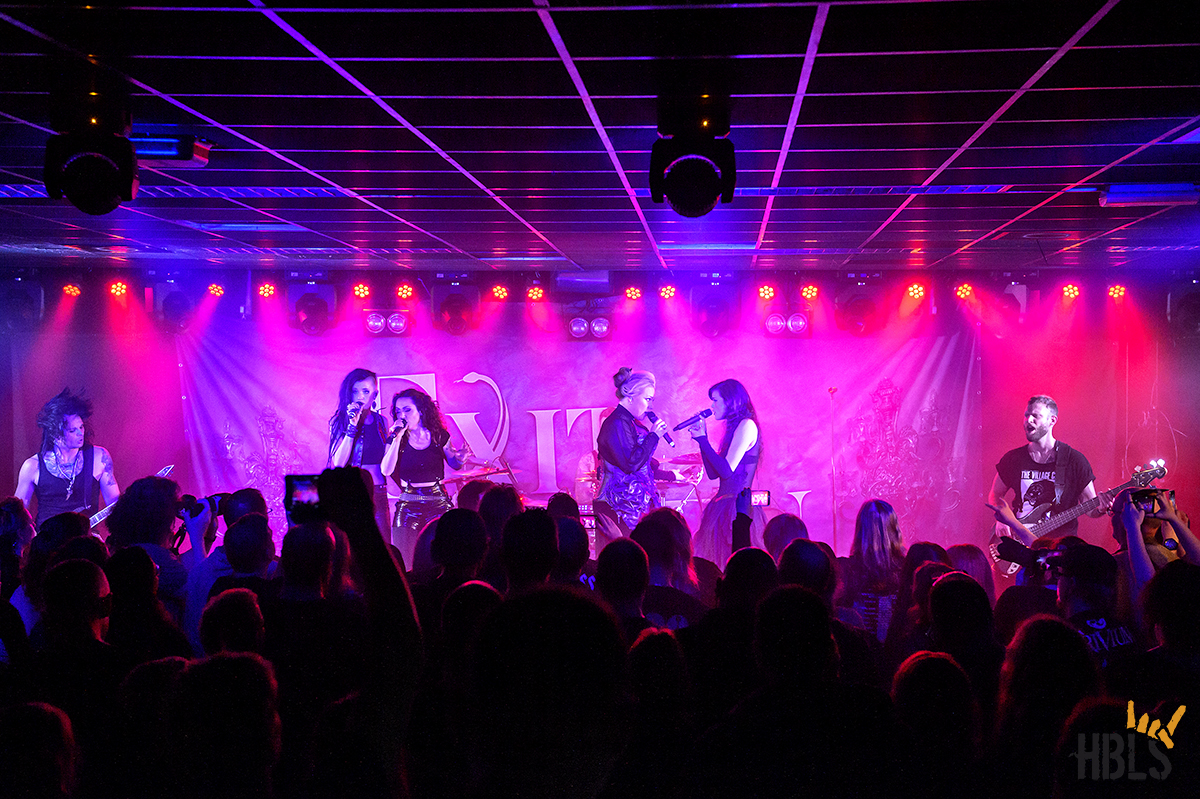 American singer/soprano Amanda Somerville has built a successful career in the European rock and metal scene, after she moved to Germany many years ago. She has great success as a singer, a vocal coach, producer, songwriter, lyricist, recording and live artist and I’m sure you might know her from Avantasia, Kiske/Somerville, Trillium, HDK a.o.. Two years ago Amanda formed the all female project Exit Eden, featuring also Clementine Delauney [Visions Of Atlantis], Marina La Torraca [Phantom Elite] and the Swiss Anna Brunner and released the debut `Rhapsody In Black’ that year, featuring well-known pop songs in a more heavy and bombastic version.

All ladies do have constant fully booked agenda’s but now the universe has decided that it was time to take `Rhapsody In Black’ to the stage. This Friday evening Exit Eden gathered in Lelystad, The Netherlands, to do an exclusive club show which lured fans of female fronted bombastic metal from all over Europe to the venue ‘Corneel’ to be part of this unique event. 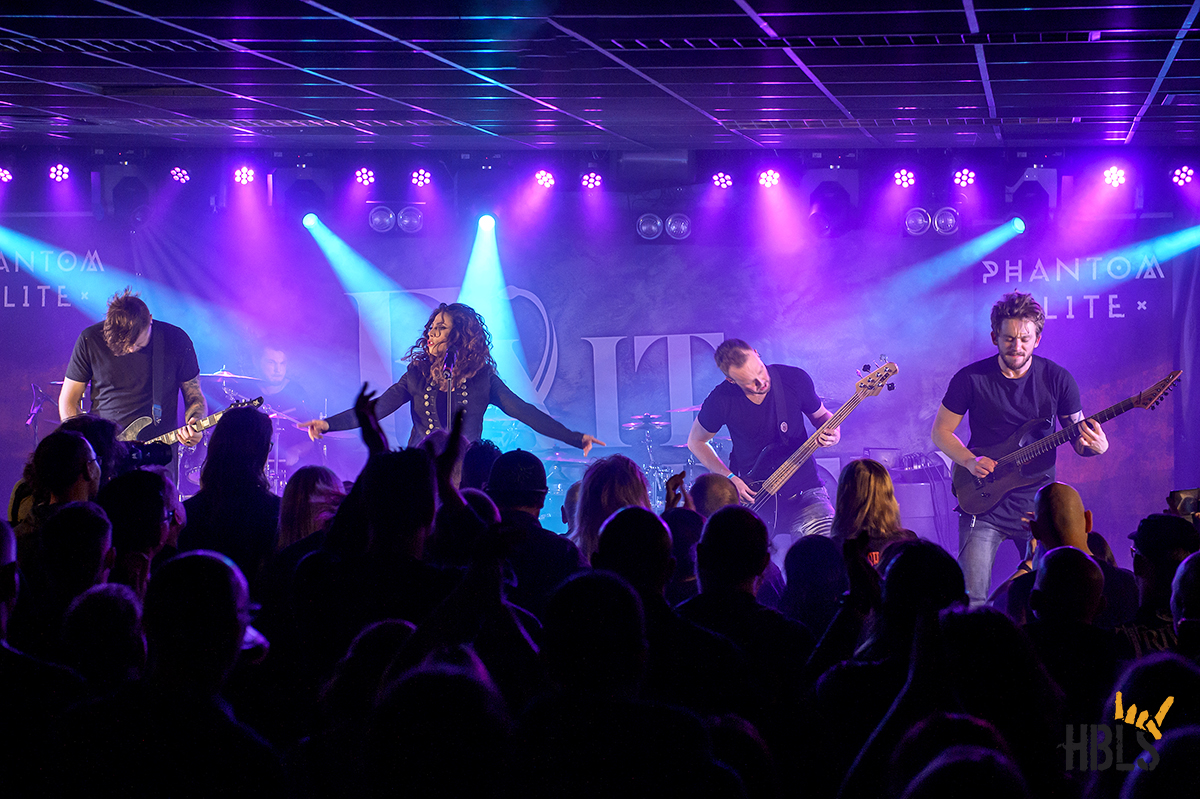 But, first things first. Brazilian/Dutch band PHANTOM ELITE has about 40 minutes on stage to fire up the crowd, which also means a double shift for the sympathetic Brazilian front lady Marina La Torraca. Marina knows how to handle the stage, how to interact with the crowd and she has an impressive vocal range. Her band mates go full force playing complex, fast symphonic metal. There’s speed tempos, double bass racing, frequent tempo changes, progressive input, orchestration in the background, a million guitar melodies and riffs and this young band gives it all to please fans of for instance Epica, Mayan, HDK, a.o. Unfortunately the sound is way too loud and messy, which pushes the songs [mainly from their debut album `Wasteland’] into a less appealing direction, because melodies, details and variation are clearly suffering from that. Nevertheless the band did their very best to show their potential and the crowd appreciated it. 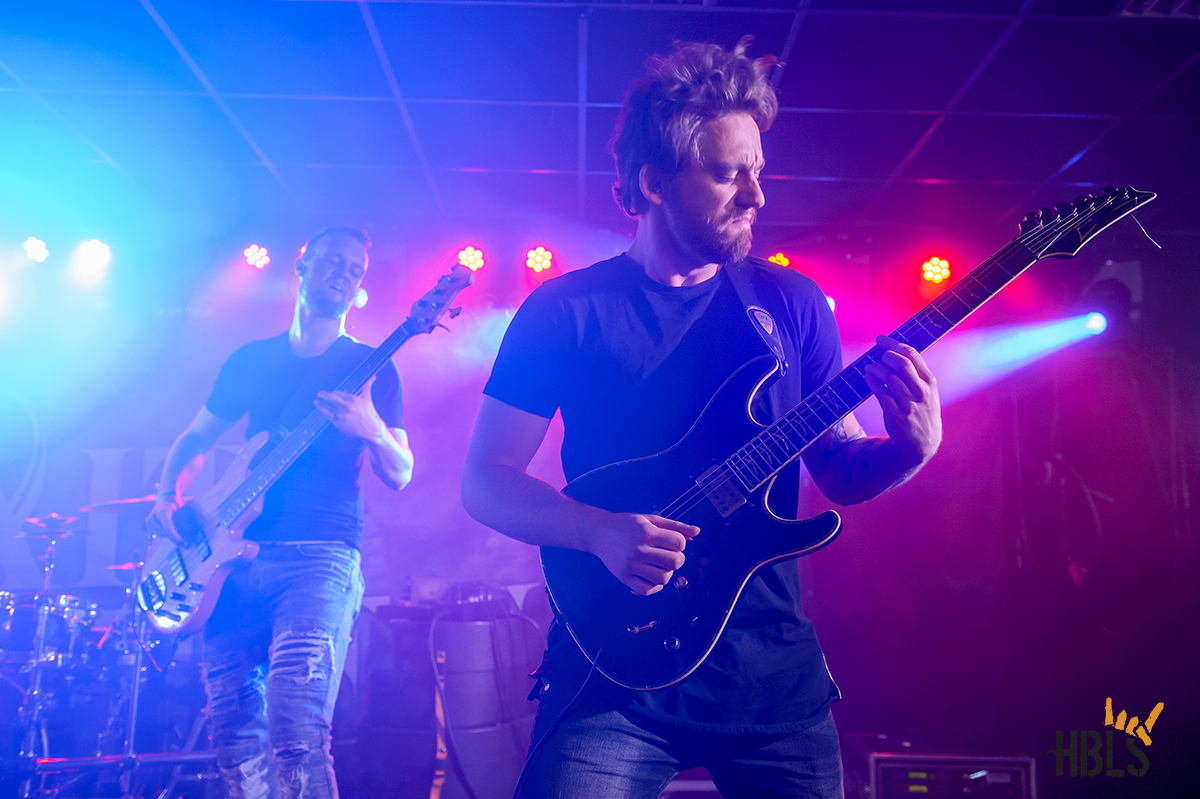 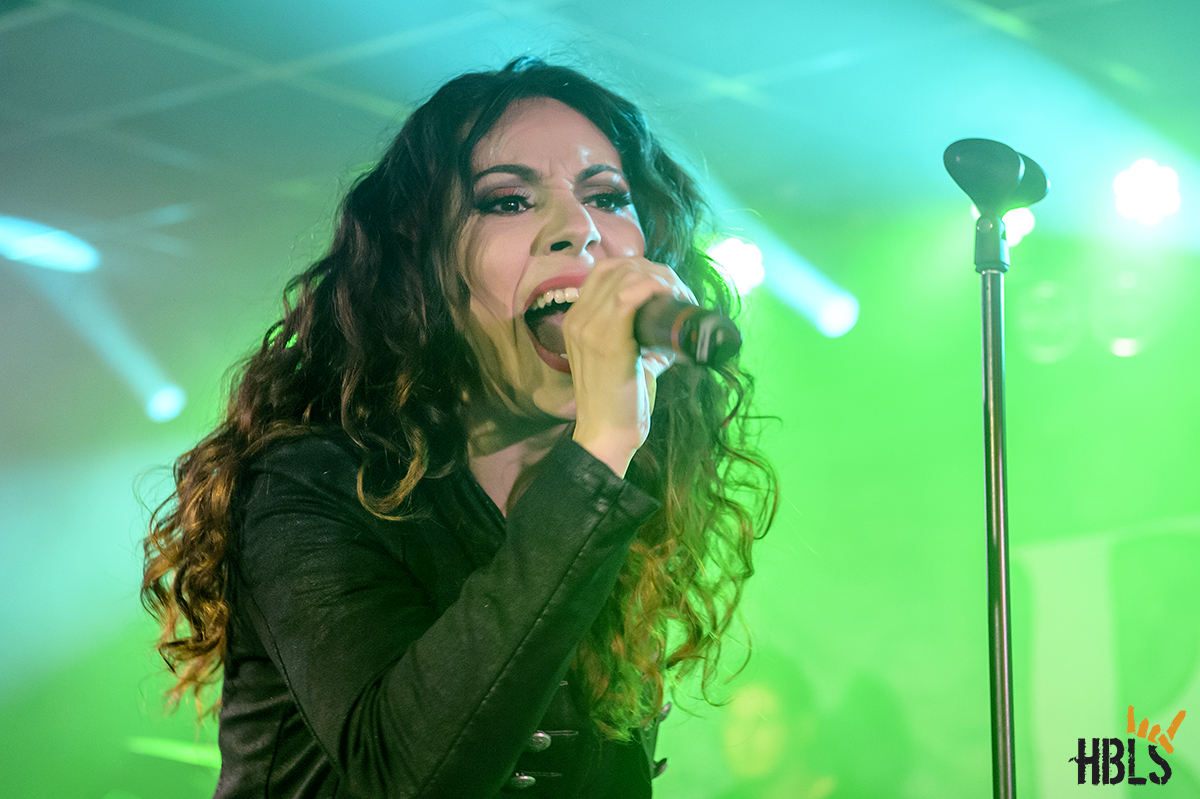 About 20 minutes later Amanda, Marina, Anna and Clementine make their entrance with EXIT EDEN‘s heavy interpretation of Rihanna’s hit ,,Unfaithful’’ and the party is on right from the start. All four singers are gifted with great vocal talent and range and a recognizable sound, blending very good together in all the songs. They all have their own charisma on stage and embrace their frequent solo spots and moments to shine, but the singers mainly present themselves as a team that enjoys singing all these pop hits together. Though I must say that initiator Amanda is the real powerhouse here. She has such a great voice and beautiful vocal range, which sounds warm, full and spot on, and her positive and warm personality shines through her entire performance. Normally metal fans aren’t over the moon when they hear pop hits like ,,Impossible’’ [Shontelle], ,,Firework’’ [Katy Perry], ,,Paparazzi’’ [Lady Gaga] or ,,Incomplete’’ [Backstreet Boys] but Exit Eden persuade the crowd instantly with their heavy and re-arranged versions [including different tempos], displaying a different musical dimension and make the audience sing-along, headbang and even dance. Me, being also a fan of the old school new wave and synth pop, I especially enjoy Visage’s ,,Fade To Grey’’ in which Anna’s edgy voice gets the song really going. Also Depeche Mode’s ,,A Question Of Time’’ gets extra kudos. 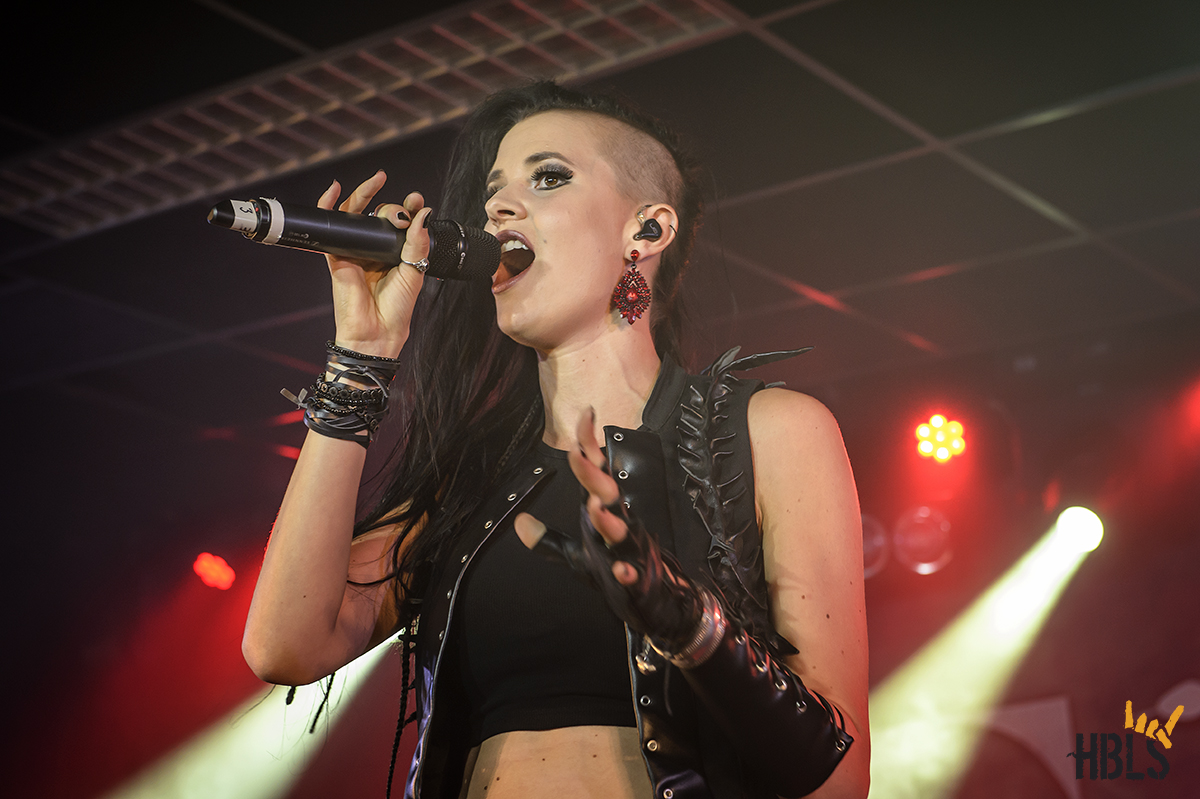 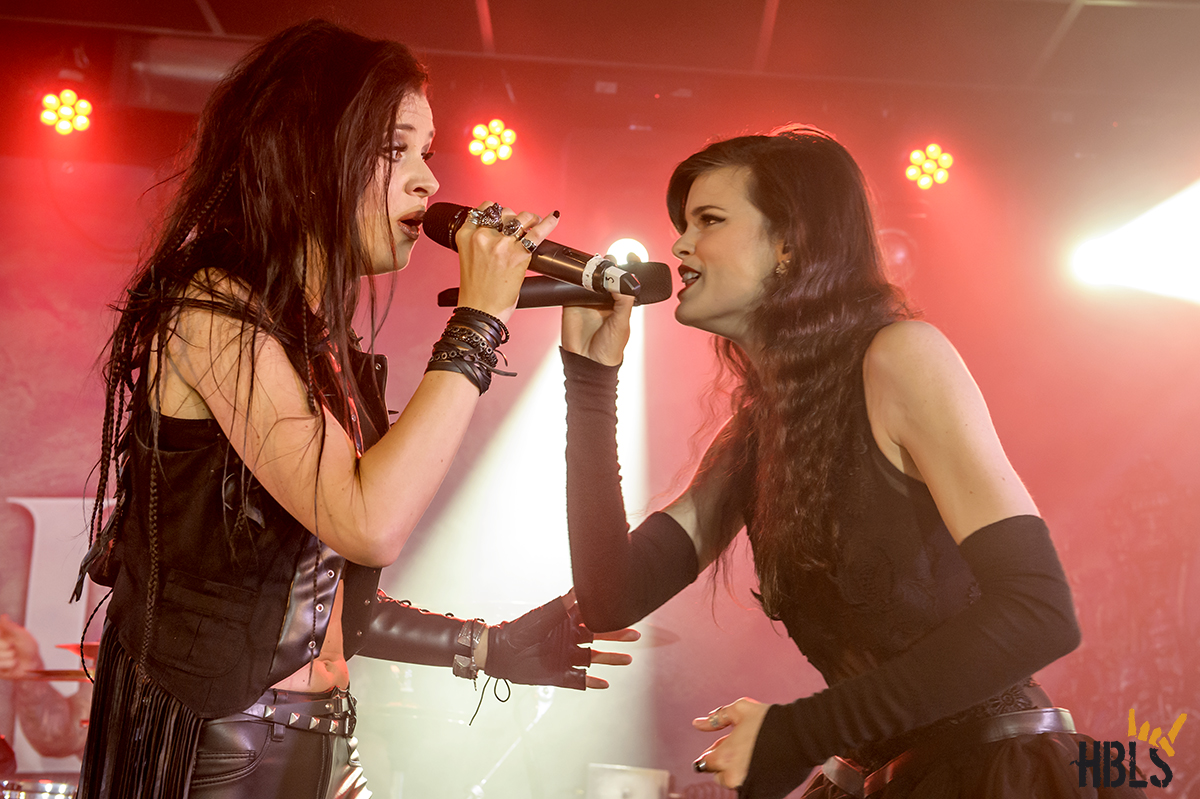 And while the ladies, who are by the way dressed up in stunning and cool looking outfits, are totally rocking out, they get great support of the backing band which, for the occasion, features the flamboyant Kissin’ Dynamite guitarist Jim Müller who does a great job here. Halfway the show Amanda takes a moment for suicide awareness, telling she lost a close friend two weeks ago and ensuring the audience that if you battle against depression, insecurities or other thoughts, know that you do matter. It’s a beautiful gesture that seems to become a “thing” among artists because Disturbed did the same a few days earlier. 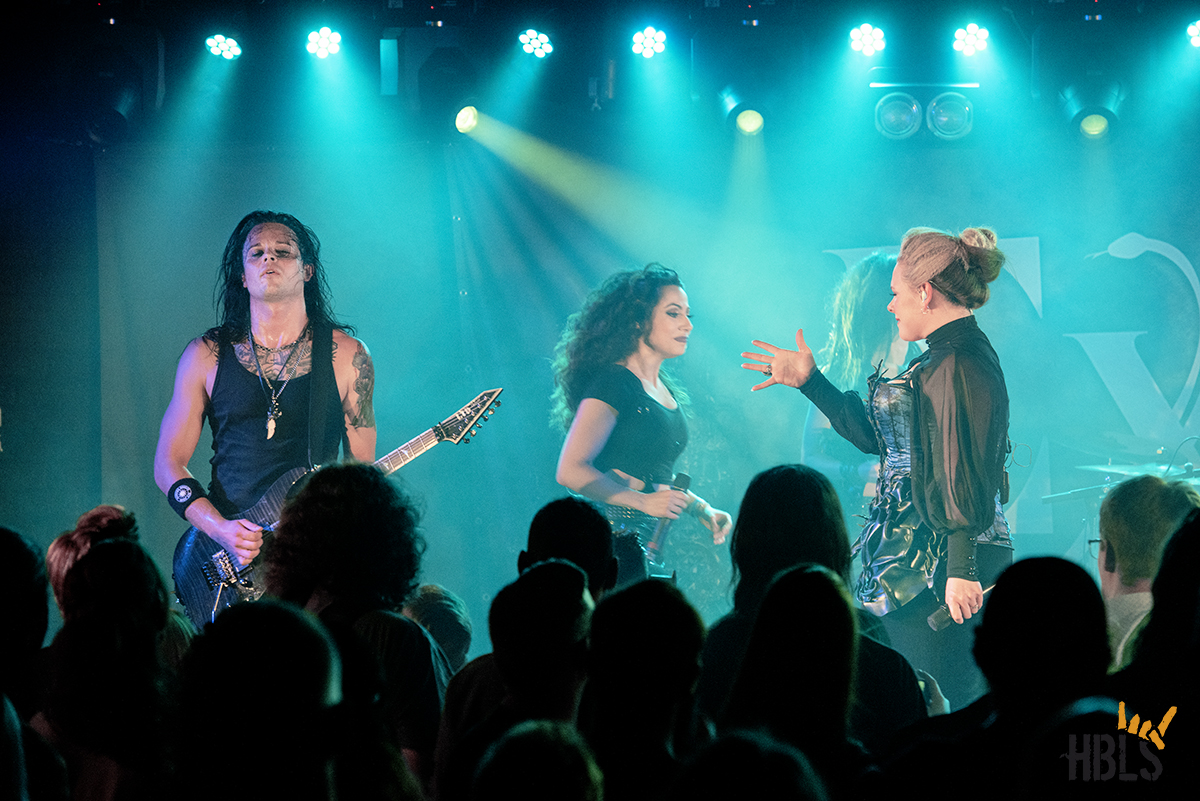 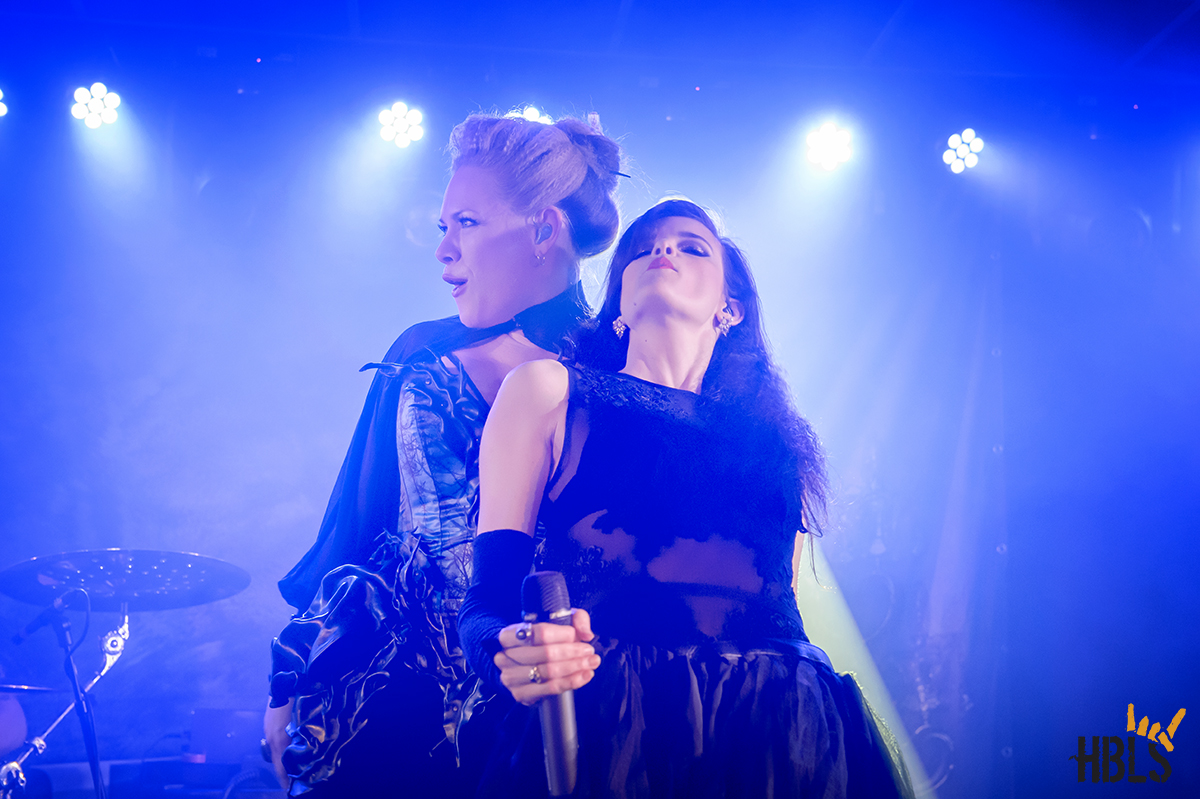 Bryan Adam’s ballad ,,Heaven’’ gives Exit Eden a minute to slow down, Clementine gets to honour her childhood idol Madonna in ,,Frozen’’ and Bonnie Tyler’s anthem ,,Total Eclipse Of The Heart’’ isn’t one we can ignore either. The James Bond soundtrack hit ,,Skyfall’’ of Adele isn’t a piece of cake to perform but Exit Eden also nails this one. Anna announce that they wanted to do something special for this evening, Amanda takes over by singing unearthly melodies at first and then the Rhapsody In Black Squad surprise us with old time favourite ,,Thunder’’ of AC/DC, taking the a little over an hour show straight to the max. 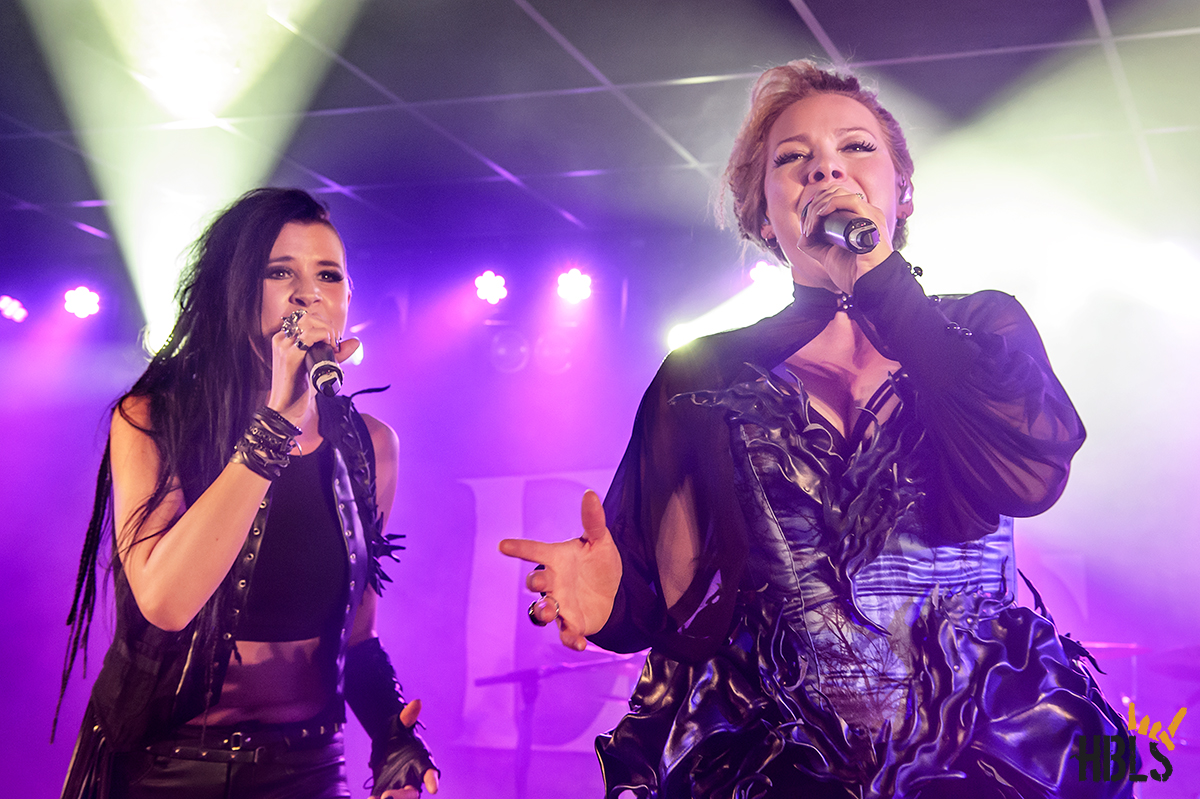 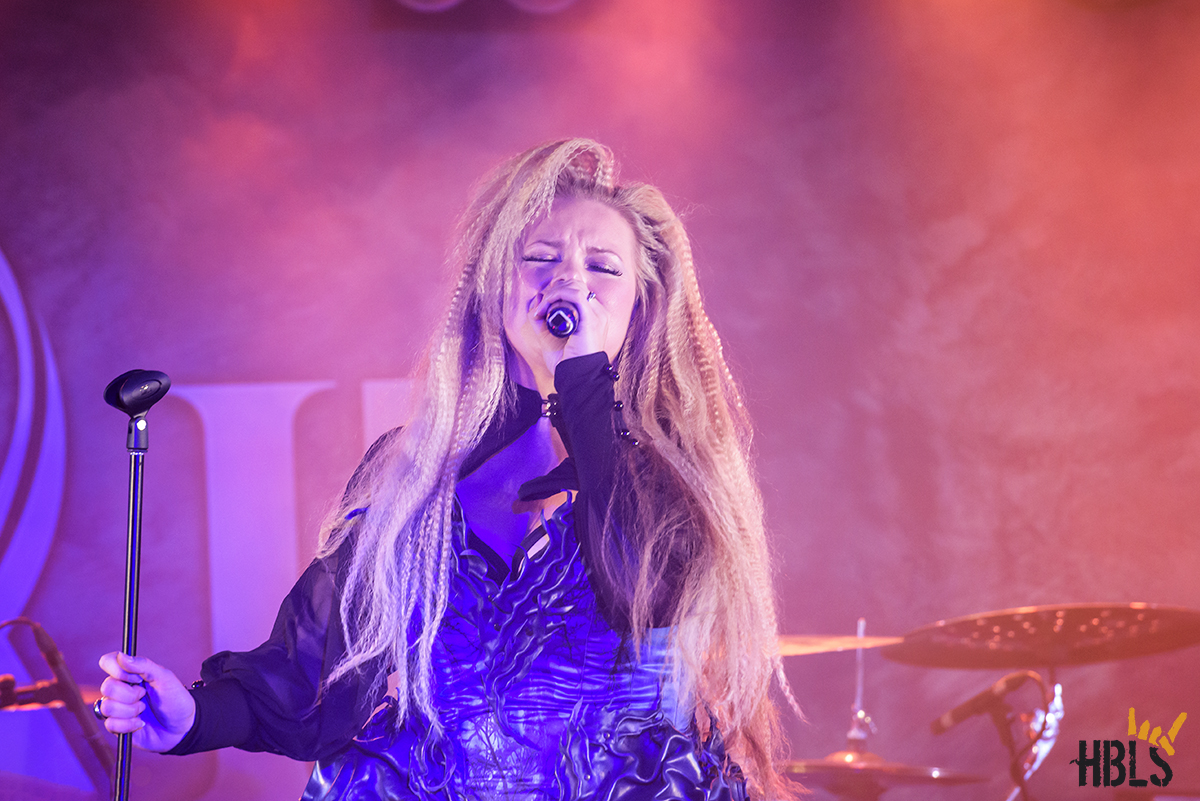 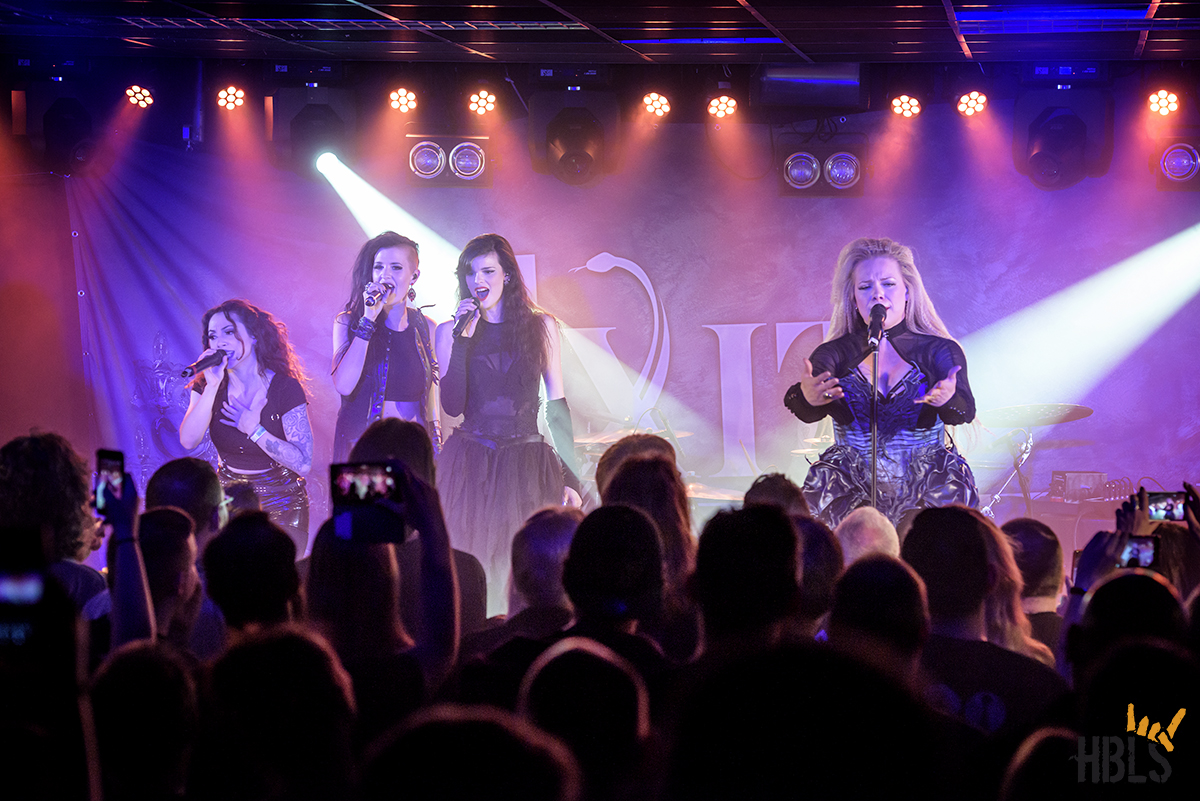 Without a doubt we can conclude that this Exit Eden show was a success and luckily Clementine promise us all there will be a second album and who knows more live shows. The evening officially ends with a bow and a selfie moment and the fans who bought a VIP ticket are allowed to stick around for an intimate acoustic performance, just vocals without a microphone and Jim on the acoustic guitar. It is a very personal setting and very special for these fans. Right after they also get plenty of time to take photos and chat with the ladies. It was definitely a very special ending of this unique evening. 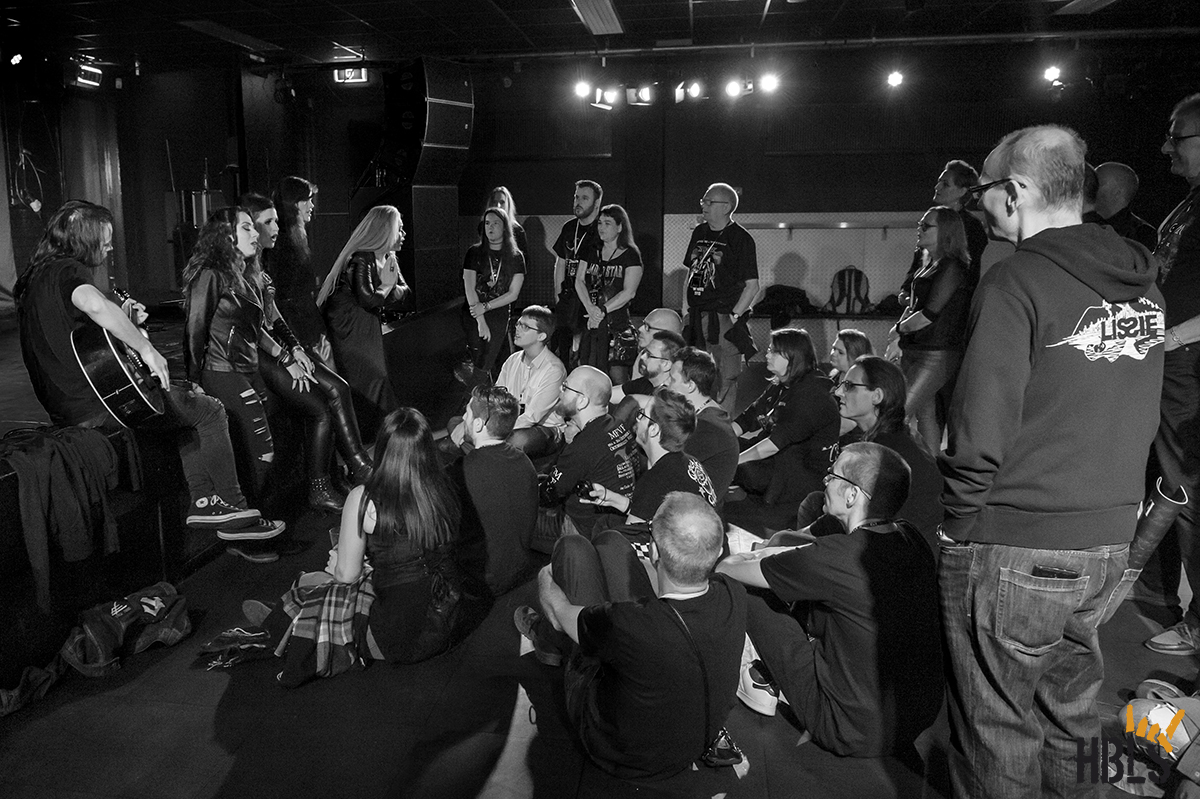 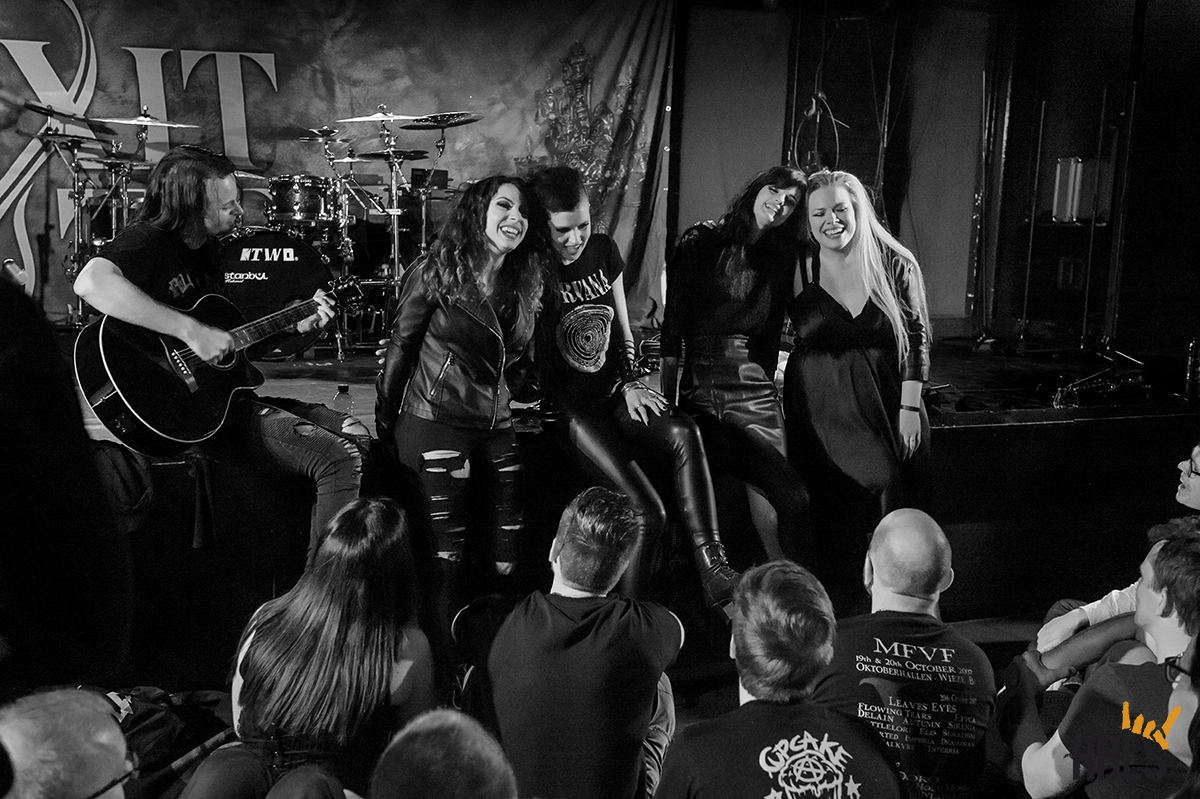 —
All Photos by Conny van den Heuvel of DCH Photography