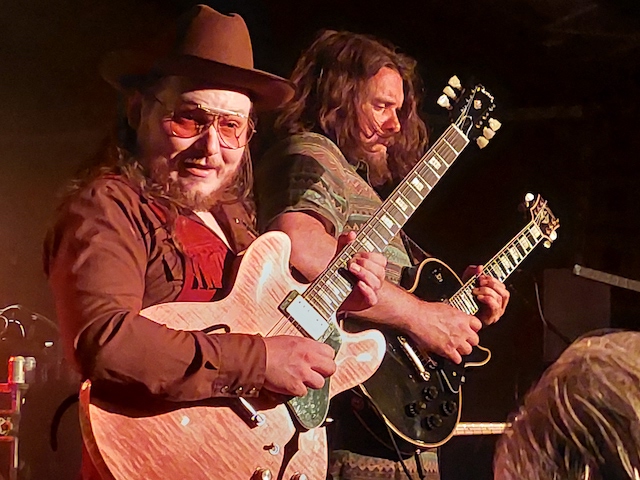 Every once in a while, you run into a band whose popularity seems not to be in sync with the talent. Bands with noticeable surplus of quality and authenticity that somehow go unnoticed by a greater public. Bands that deserve better so to speak. Take The Sheepdogs for instance. In their home country Canada, these roots infused heavy rockers have been enjoying a certain celebrity status for quite some time already. In Europe however their popularity is considerably lower.

Take this Wednesday evening in Antwerp for instance; 125 attendees must be a quite unsettling number for a band whose studio records reach platinum status in North America. And The Sheepdogs weren’t the first unsigned band ever to feature the frontcover of the almighty Rolling Stone magazine without reason. Having said that, the five headed longhaired outfit is currently touring Europe in support of their latest studio effort, the brand new `Outta Sight’; their seventh album to date and, without doubt, their most rocking one for sure. Whilst the eclectic predecessor `Changing Colours’ was all over the place, `Outta Sight’ seems to be firmly rooted in fierce southern rock.

Prior to the show HBLS spoke to guitarist Jimmy Bowskill and bassist Ryan Mullen. The latter explains why the new album came out so heavy and coherent:
,,Due to Covid `Outta Sight’ saw the light under total different circumstances. `Changing Colours’ was like a jigsaw puzzle. We kept putting pieces together and kept on adding colour, hence the title. The new songs however were recorded live in the room and we used minimal takes to keep it as pure and natural as possible. When we recorded this record, we had no idea what Covid would lead to and how the future was gonna look like. We tried to remain positive and make the best of things. We’d get together whenever we could to sit down and work on the songs.

The album came about over a longer period of time since we were forced to record the songs in several batches, whenever the circumstances would allow us. In the end we had thirteen songs but we scaled it down to eleven because we really wanted a straight-ahead record.’’

Guitarist Jimmy Bowskill on the growing interest from the hardrock community:
,,There is a lot of pretty heavy guitarwork on this one and many well-arranged guitar harmonies. So, I understand why this album has extra appeal to an hardrock audience. Having said that, we did not set out to make a heavier record on purpose. It just turned out that way. Because it was recorded pretty much live in a room a different kind of energy was created.’’

How do you explain the difference in popularity between North America and Europe?
,,That’s a good question to which I wish I had the answer’’, Mullen says. ,,We have been coming overhere on a regular basis and we are getting more fans for sure but it’s just taking a bit longer to get noticed. We also struggle a bit by the fact that we are not easy to pinpoint. Some see us as a heavy rock band while others label us as Americana. Hardrock festivals sometimes find us too light and roots festivals too heavy. Since we are not easy to define it is a bit hard for us to find our place.

But at every show we win people over and that’s what counts really. It just takes some more time. In Canada we are on the radio a lot and that helps too of course. These past years we have seen a certain growth in Europe though. A slow but gradual growth and that’s good.’’

Due to disappointing ticket sales, the organization decided to move the performance from the main hall to the foyer but the size of band’s backline ultimately leads them to the Clubstage. And that turns out to be a wise decision since support act Rosalie Cunningham also has quite some backline to set up. Rosalie Cunningham. That name sounds familiar. Was she not once fronting the British progressive rock outfit Purson? Indeed. However, these past five years the skinny brunette has been working under her own name, which can be credited to a damaged relationship with her then record company.

In the forty-five minutes that Cunningham, her keyboardist, guitarist and drummer have possession over the stage not a single Purson song comes along. Instead, the band focuses on the two albums that were released post Purson. Same thing, different name! Cunningham still creates the same lush, bohemian slanted art rock with light hints of occult. The pointy, often mysterious sounding riffs and folky elements still bring the likes of Jethro Tull to mind. Like most artists and bands, Cunningham endured some rough years but tonight’s performance evidently shows plenty perspective for her original and colorful output. The enthused audience responses should feel comforting and the interaction at the merchandise stand after the show is also of the rewarding kind. Purson is dead, long live Rosalie Cunningham.

When the clock strikes nine the hairy bunch from Sasketoon, Saskatchewan enter the stage to rule for the next hour and a half. Dressed in colorful retro outfits, it takes ‘em little effort to get the crowd going. The atmosphere is electric from the very first notes. Sheepdogs’s music has feel-good vibes all-over and both musically and visually this is a very strong collective. With such catchy songs, showmanship and human interaction little can go wrong. Singer/guitarist Ewan Curry should be the eye-catcher and measuring 6’4” in fact he is.

But the enigmatic bassist Gullen also draws plenty of attention with his exuberant poses. However, the moments when lead guitarist Bowskill takes position on the edge of the stage to unleash his spot-on solos clearly have an effect on the hungry audience. But when both guitarists execute one of their countless twin solo’s the atmosphere reaches maximum heights. Southern rock fans and Allman Brothers Band in particular are served well by these two sheepdogs.

In terms of vocal performance, the band does not come in short either. Whether it’s Currie’s addressing his demanding and heartfelt lead vocals or a bunch of them singing together in blissful harmony, it’s all candy to the ear. The Sheepdogs definitely know how to put on a good show. The keyboard player playing a third guitar and the drummer who operates the keys; it’s the kind of stuff that really adds up and emphasizes the versatility of this formation. So be sure to check out this blues and soul injected southern rock machine next time around.

All photos by Stan Novak