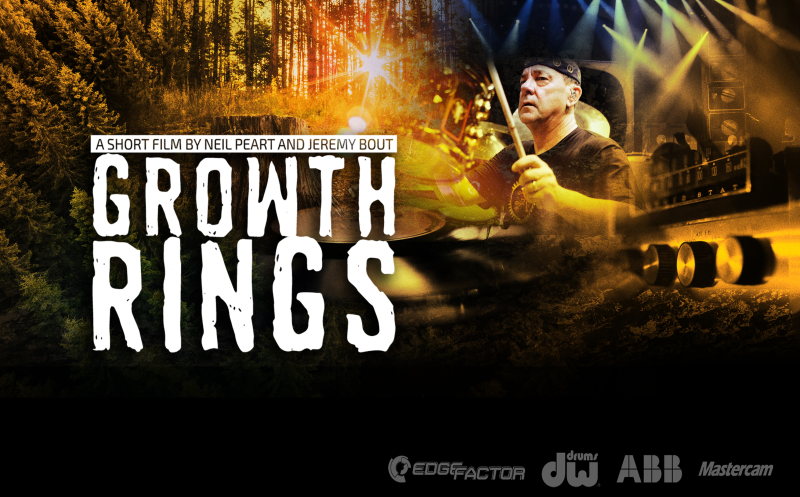 Consider it a short closing chapter of the man’s legacy… the last snippet of his impressive career. This is a documentary in which Neil Peart fuses his creative visionary narration with his love for music and life. Much like the gripping way he penned his personal musical inspiration in `Travelling Music’ vividly to live, this short film sums up the essence of music affecting life and memories. `Growth Rings’, outlining the triumph and ordeals of our lifetimes.

Nature’s way of reporting a tree’s cycle year in a groove: the growth rings. “…unique slices of time”. Impact of climate, forest fires, rains or sun as a sticky note captured inside the hard shell of the tree. The story of the rings projected onto a human being’s life, with its evolutionary steps of maturing. The highs and lows marked by tones, beats and melody. Reflecting; I myself have fused fond memories with music unmistakably transferred as the melody and music of a specific moment, held together as the soundtrack of an era or decade. Music tying together a series of events within the timeframe of my own growth. My teenage years being introduced to Elvis, my mother’s idol. The memories of tracks and tunes played in the summer, the melancholic songs that represent autumn and winter. Though I didn’t grow up surrounded by music, there are fond recollections of specific songs. Kamahl’s ,,Elephant Song” reminds me of the front (playing) room with the new orange chairs… the mid 70’s. While ,,You were always on my Mind” by Elvis that leads me back to the anguish of losing my beloved grandfather in 1980. The album I just been hand down and the song spinning being stuck at home while family and friends went to pay their respects and say goodbye.

It’s centre point of the 7:53 minutes film that binds nature with our memories. Much like seasons can be read in the rings of trees, music reflects the weather of its time and embodies the moods and moves. The great American songbook as the soundtrack of the 30s and 40s. Swing and Dixieland. Or the 70s songs of love and songs of protest. The vivid imagery is keenly interlaced with the story line, with Peart’s voice perfectly matching moods. Contributing to the movie is the appealing way Peart choses his words, perfectly drawn up by himself and Bout.

The opening shot of the empty chair behind the studio microphone, the rug on the wooden floor… it is where our hero sat down to record his last (?) words. It is immediately gripping and emotional for fans of ‘the professor’. His lyrics impacting on music. Words perfectly lined up with the musical execution of the trio. ,,Nobody’s Hero”, reflecting those marked and scared by life with the music ousting emotion. ,,Manhattan Project”, about the ,,Big bang” that ,,Shot down the Rising Sun”. How the music empowered its lyrical content, packing the right amount of tension building, and the Neil-ish hectic sub notes in the drum rolls and the eclectic fills. The way he fused music and lyrics was ahead of its time. The way Peart and Bout fuse the story and words on `Growth Rings’ has the same appeal.

Without any doubt the film is more personal than one expected at first spin. The rug and mic slowly but surely morphing into images of his band and Peart performing. It feels much like his final goodbye explaining his personal feelings of why he created. Explaining why he himself created the `Growth Rings’ for so many devotees.
Amidst the story and images, Peart fuses music and nature as creating power that bind: Touching the creation of his DW Drums-kit it transcends the message of musical creation and make the story go full circle. Edited and narrated with integrity. 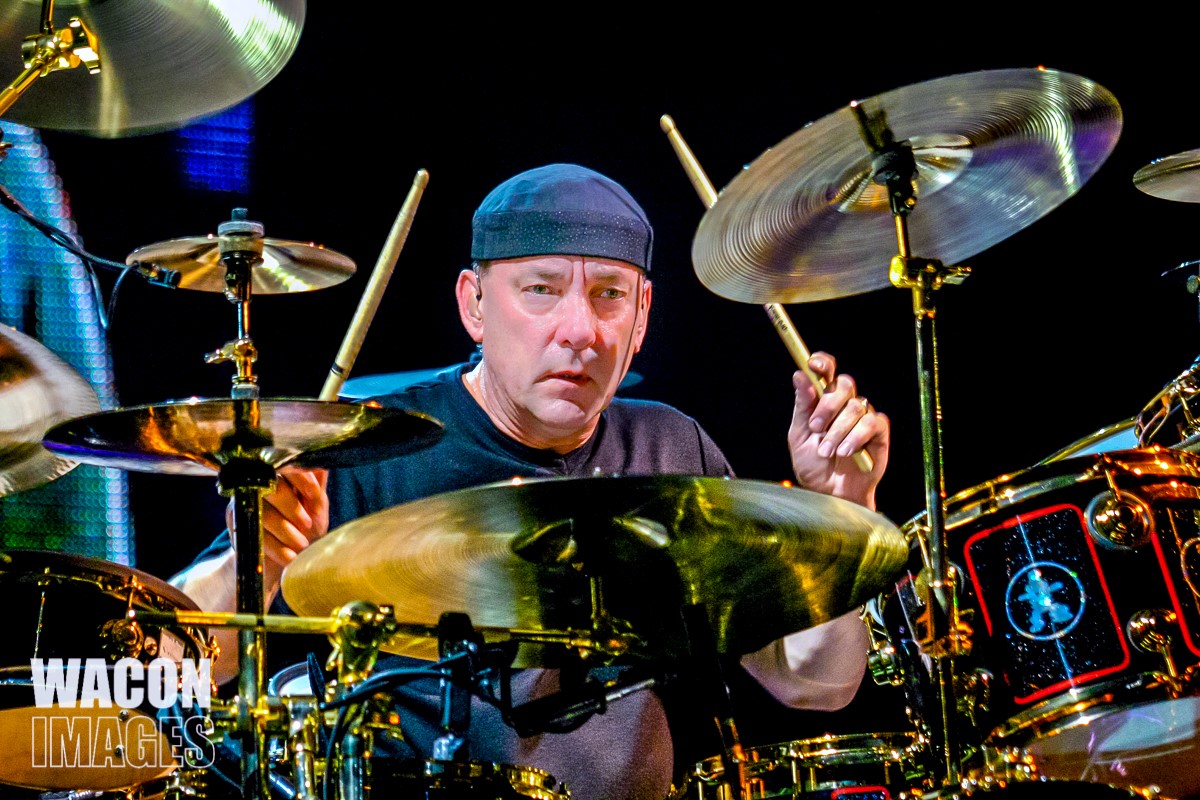 `Growth Rings’ displays the genius of 2 men creating a (life) story that nests easily. A story, which immediately injects you with images of your own past… You start and revert to times and moments looking for music, looking for tracks that surround your emotional memories. That, and vice versa: You remember tunes tied to a specific time or moment. Melodies or beats that line up with your memories and emotion, from bad to good, dark to light. `Growth Rings’ is the final chapter of Peart’s career, the famous last words leaving fans behind with fond memories.

The tone of voice as subtle act of a great performer. Tears well… hearts fulfilled.

I spin ,,Countdown” and my memories are pushed back to the maiden voyage of Space Shuttle. How the music enters with marching drumrolls on Peart’s snare. The welling tension of the track building towards the launch. Memories and scenes that crackle with live. The countdown from T minus 9 onwards, “… voices tense” as they resume the final count, the boosting engines and the “earth beneath us starts to tremble”. The “Thunderous Roar that shakes the air like the whole world’s exploding…”. The way Peart injects the image of a “Scorching blast of golden Fire” when Shuttle takes off and reverts to the trail of smoke “like a pillar of cloud” ….
Exclamation earlier “Technology high, on the leading edge of Life” and finally concluding “In fascination with the Eyes of the World we Stare”. Sheer freaking brilliant. 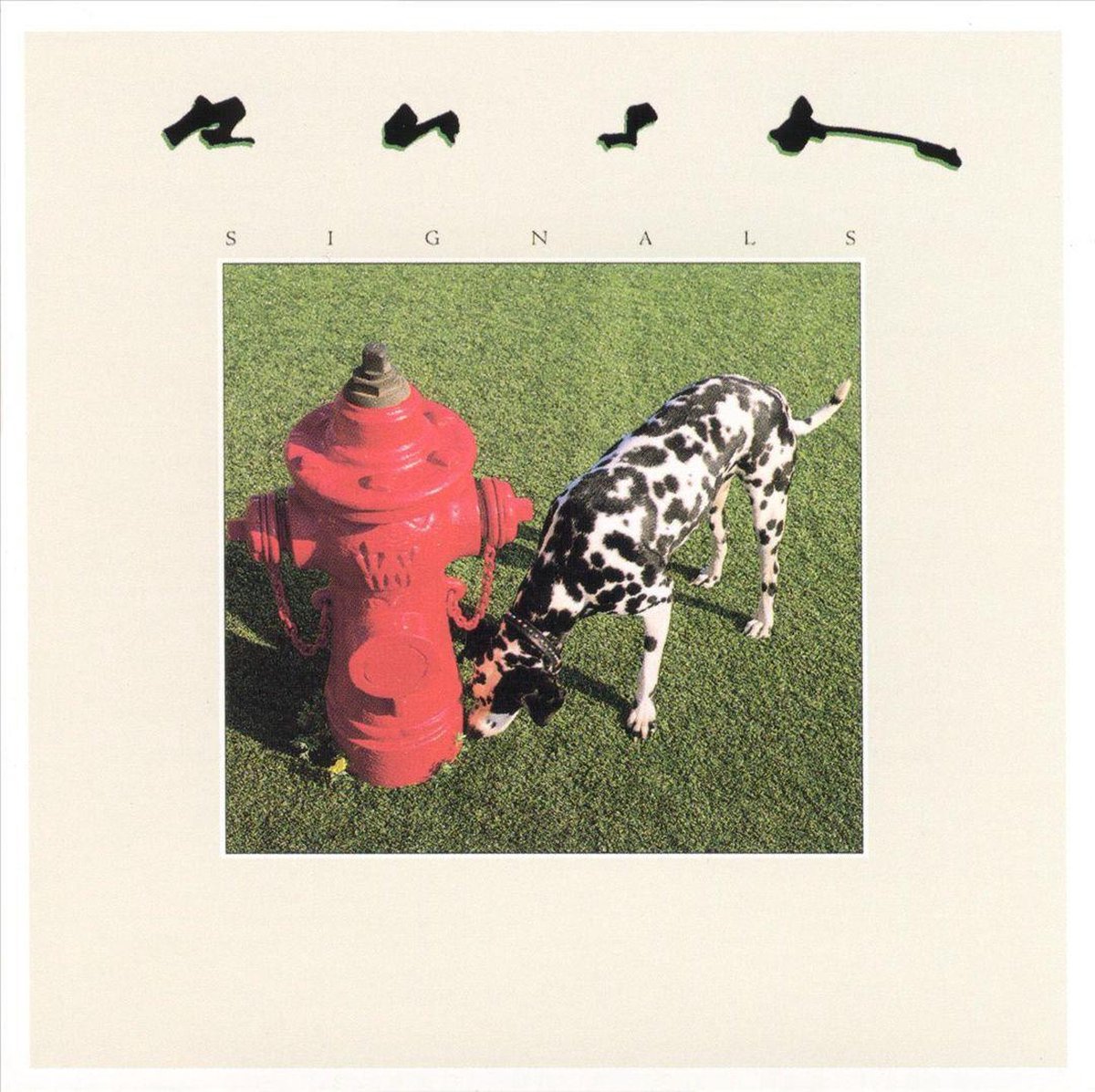 Lit up with anticipation
We arrive at the launching site
The sky is still dark, nearing dawn
On the Florida coastline

Floodlit in the hazy distance
The star of this unearthly show
Venting vapors, like the breath
Of a sleeping white dragon

Crackling speakers, voices tense
Resume the final count
All systems check, T-minus-nine
As the sun and the drama start to mount

The air is charged, a humid, motionless mass
The crowds and the cameras
The cars full of spectators pass
Excitement so thick, you could cut it with a knife
Technology high, on the leading edge of life

Excitement so thick, you could cut it with a knife
Technology high, on the leading edge of life
Like a pillar of cloud, the smoke lingers
High in the air
In fascination with the eyes
of the world we stare