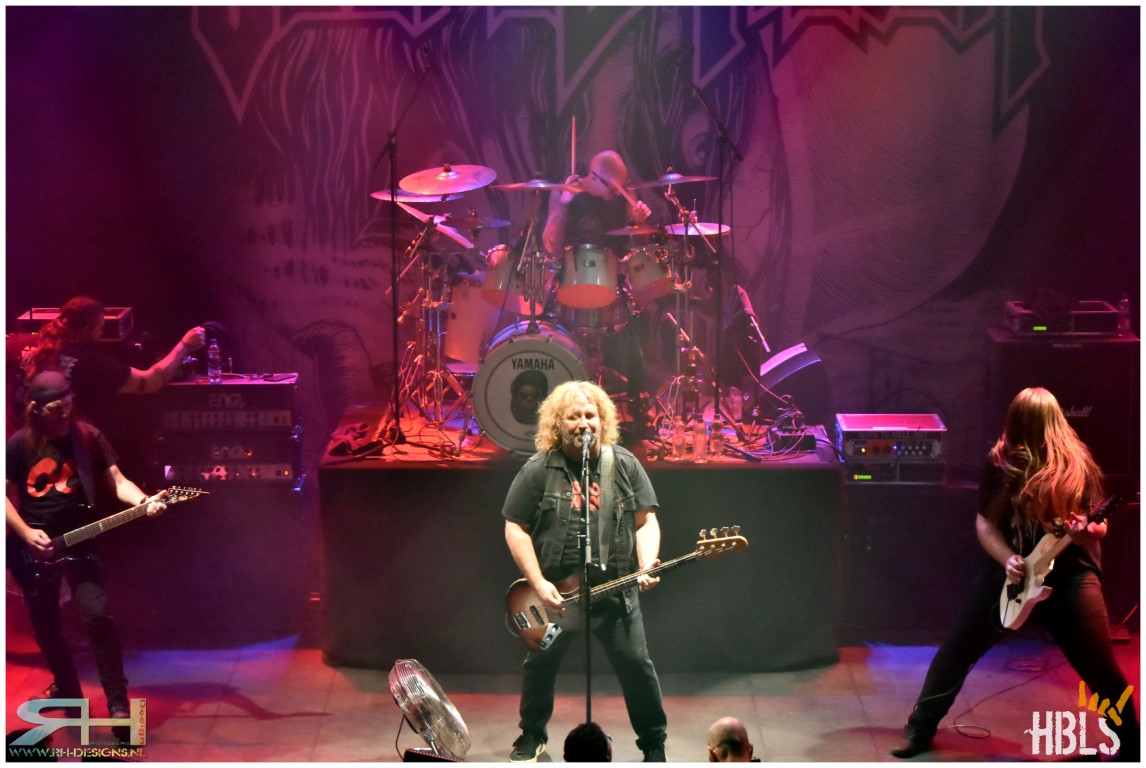 December 8, 2019 by Raymond Helebrand - More about our team

Is Sacred Reich able to revive the good old thrash days? Raymond Helebrand of RH-Design was curious and went to see these thrash metal greats at the ‘Cacaofabriek’ in Helmond (NL). He came back with a report and photos. Sacred Reich brought Night Demon with them as support but if that was a wise choice?

The recipe for today, a big fat mix of Thrash Metal. Because I was on my way to the Cacaofabriek in Helmond to catch the sold out show of Sacred Reich. The band currently on the ‘Awakening Tour 2019’ to promote their latest record ‘Awakening’, the first record they released after 23 years! After checking some facts, I found out the 2 gigs I had seen in the past already dated back to 1990 when they promoted their (in my opinion) legendary album ‘The American Way’. First at the well known Dynamo Open Air festival and later that year in Brunssum, at the ‘Sheltur’ club. These guys, back then put on amazing shows, so I was curious to find out how they sound in 2019. 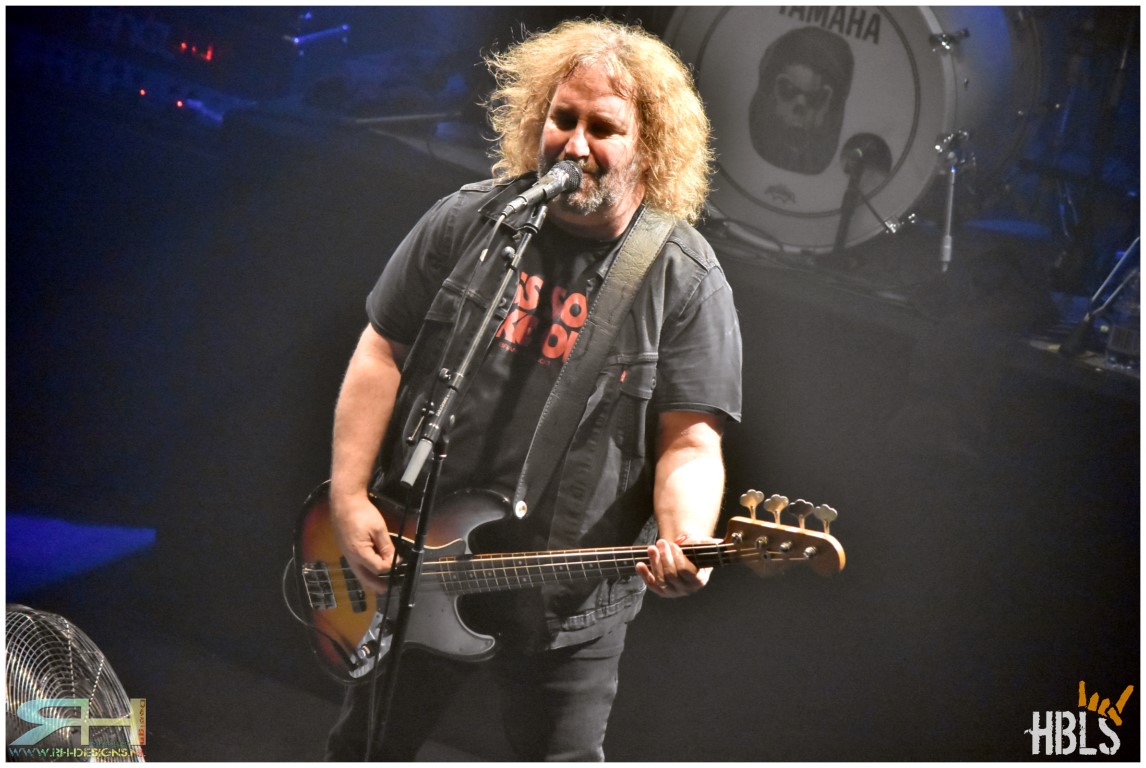 The venue in Helmond was packed with people, so it is fair to say, Sacred Reich is still relevant!! And how cool it is to see Phil Rind himself selling merchandise before the show. I think this says a lot about the person he is.

Before we got to see the main band of the night, the crowd had to swallow the support of tonight: Night Demon.
This three-piece band from Ventura, California is around since 2014 and has produced 3 full length albums and an EP.
To me, Dusty Squires (Drums), Jarvis Leatherby (Bass/Vocals) and Armand John Anthony (Lead Guitar), could have been time travelers because they made the impression as if they had come straight from the early 80s. The music, as well as their stage presence, has ‘NWOBHM’ written all over it.

This wouldn’t necessarily be a bad thing, but the music this power trio produces is far from original. The band got to show themselves in front of an already decently packed venue and seemed to enjoy every minute of it. For me, after 3 songs I had heard enough of it. I hope this band will be able to build a bridge between the early 80s and now because they do know how to play their instruments. Song wise however they pull the short straw and the cover version of the Golden Earring classic ,,Radar Love”, at the end of the show, to me was completely unnecessary. 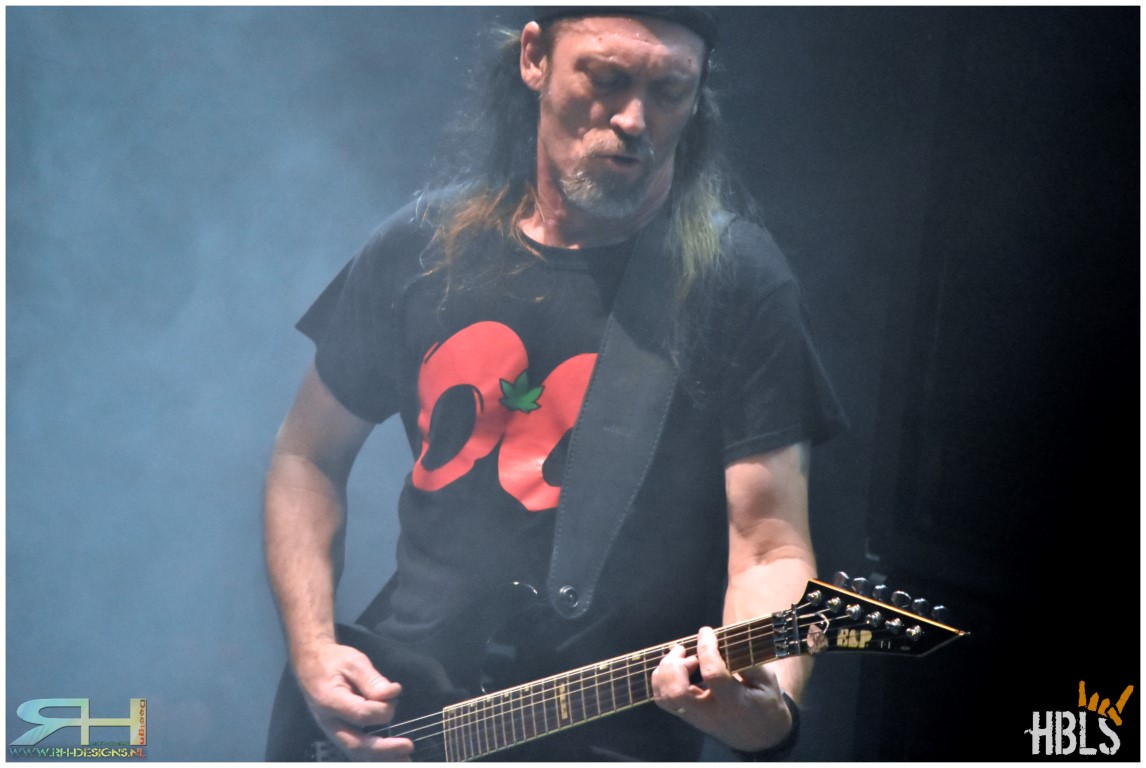 After a 30 minute change over it became time for main attraction Sacred Reich to enter the stage and so they did.
The opening song ,,Divide And Conquer’’ from the ‘Awakening’ album, did already tell us that this band does not live on past performances, as this is a killer thrash song and they do set the record straight right away. This still is a superb live band!!
The energy coming from the stage immediately connects with the crowd and the first mosh pit is a fact within seconds of the beginning of the first song.

For those who have missed it, Sacred Reich is in the building!! Second track ,,The American Way’’ (1990) is an all time classic and still one of the finest songs in the genre, after which ,,Manifest Reality’’ (2019) and ,,One Nation’’ (1988) are blown into the venue. The sound is massive and how cool is it to see original members Phil Rind (Vocals/Bass) and Wiley Arnett (Lead Guitar) really enjoy the moment of being on stage and suck in all the energy. 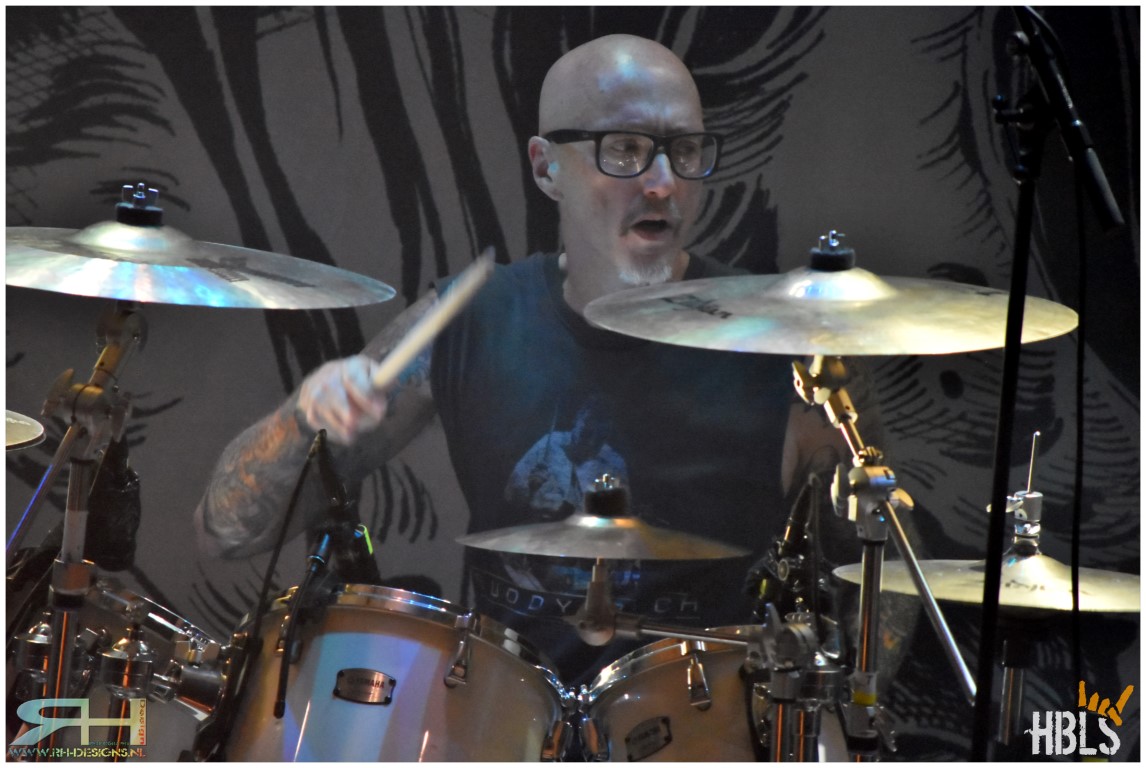 Former Machine Head, drummer Dave McClain, who is back behind the kit since 2018 and newest addition, 23 year old Joey Radziwill (Rhythm Guitar) complete this killer line up. Damn, Joey wasn’t even born when the band had their first stint in the 80s, early 90s. 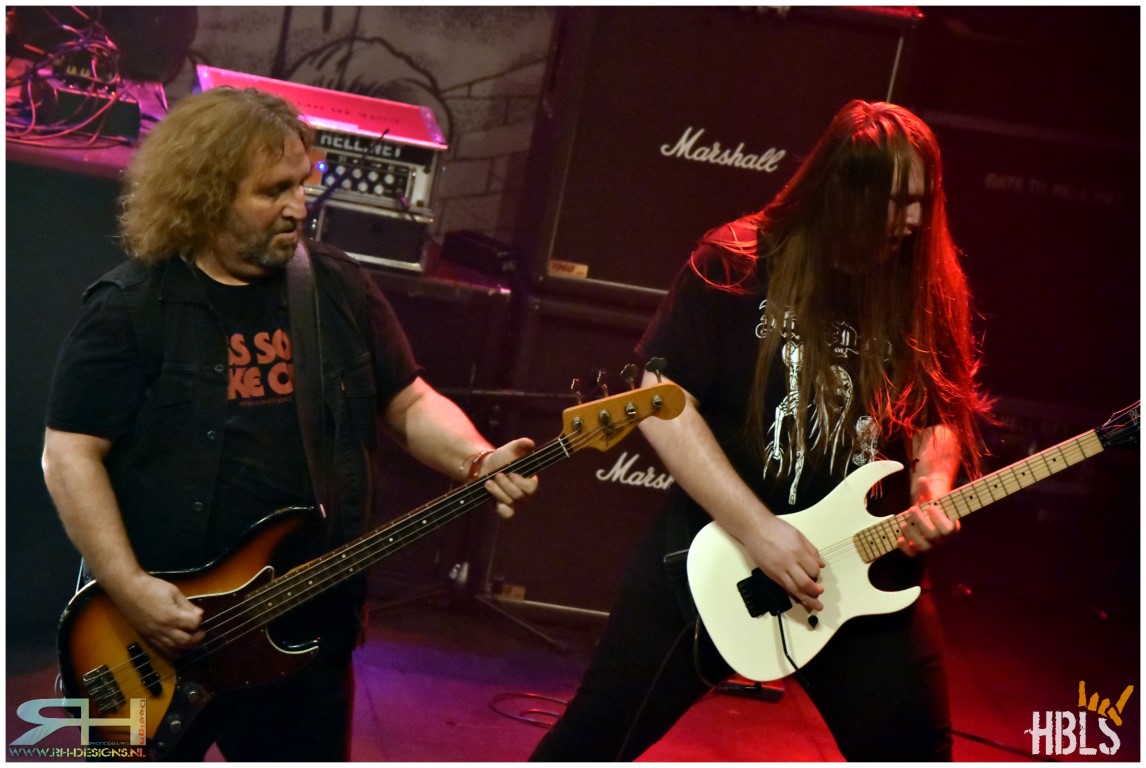 ,,Ignorance’’ (1987), ,,Salvation’’ (2019), ,,Independent’’ (1993) are next. The band shares a few anecdotes from the first time they played the Dynamo festival and remembering this as being one of the highlights in their lives. Being thankful to André (Verhuysen, the organiser of DOA) for the chance they were given back then. Personally I think this band has created their own chances by putting out great records with songs that still stand out after all these years and hard work. A lot of new thrash bands can learn a lot from a band like Sacred Reich. 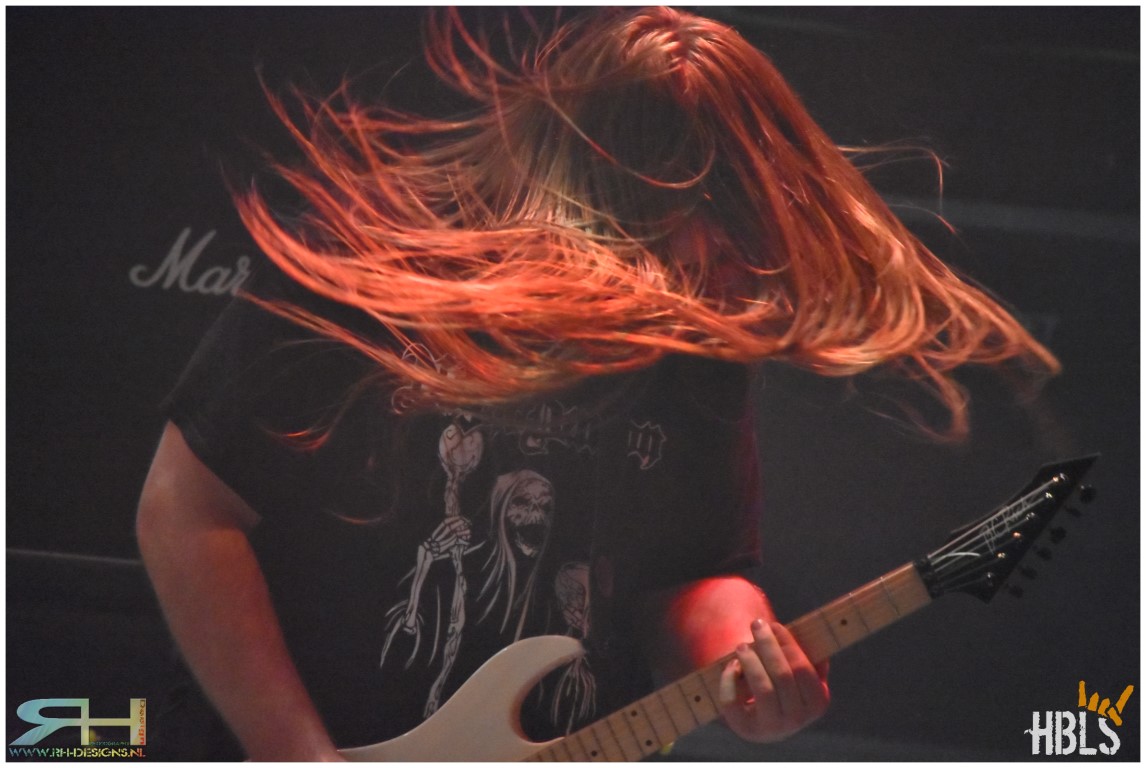 Talking about surfing.
,,Surf Nicaragua’’ (1988) is concluding this night of high class Thrash Metal. I was glad to see this band live again. The only sad footnote I can make about this gig is that it only lasted about 70 minutes, a bit on the short end to my likings.

Fans from the early days just have to go, see and re-live the memories from back in the days and new fans who have never seen the band, GO AND SEE THEM!! This band still kills it on all levels.
—
All photos by Raymond Helebrand/RH-Design
Share article