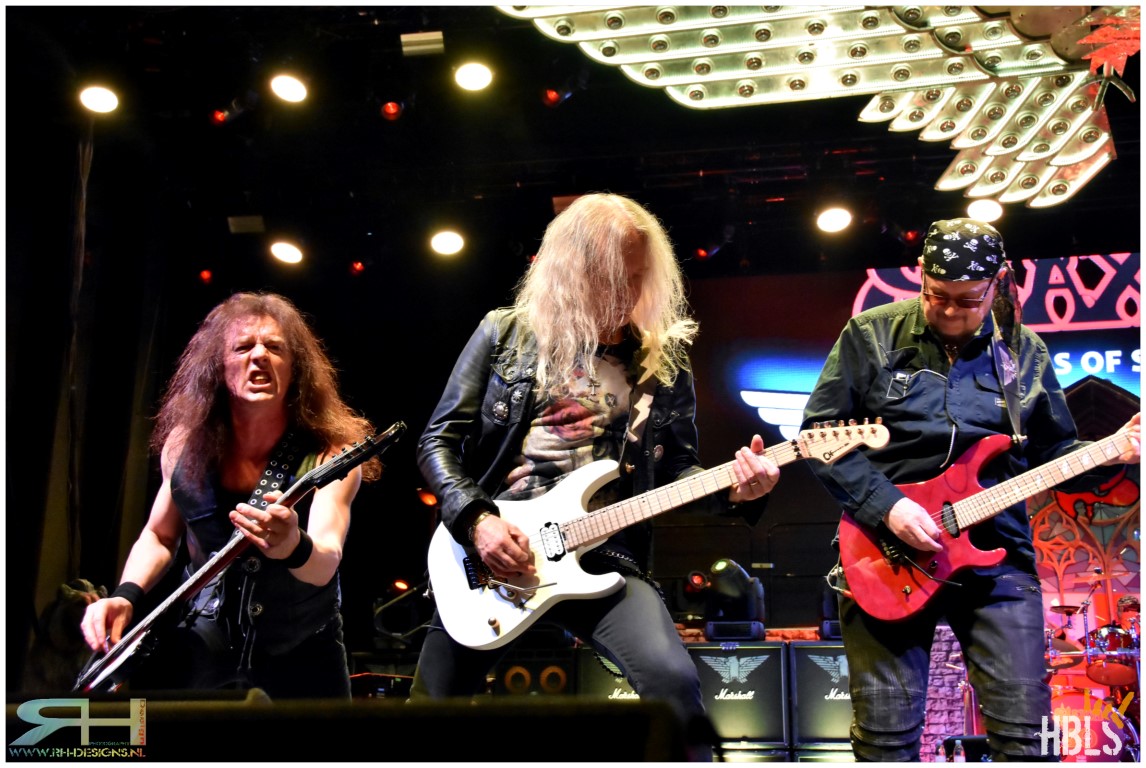 British metal legends SAXON played two sold out warm-up shows, one in Belgium and one in The Netherlands, before they travelled to Germany. What happened there can be read in the personal review by Raymond Helebrand of RH-Designs for HeadBangers LifeStyle. 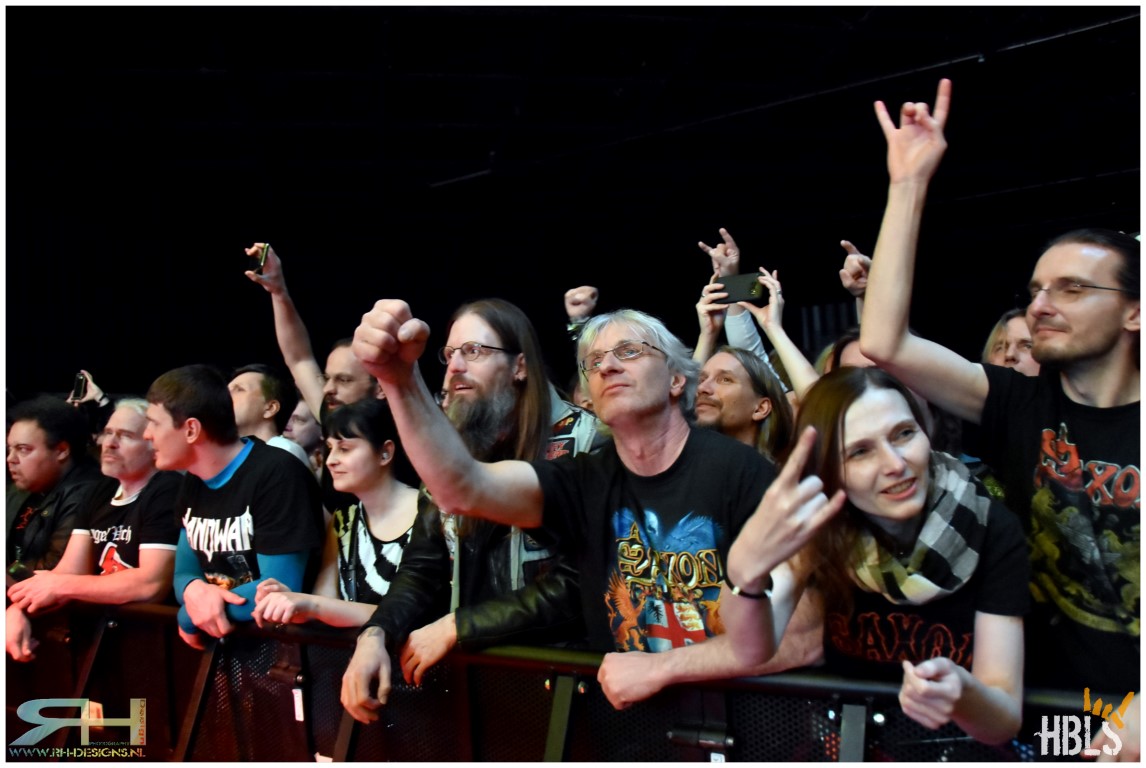 On Saturday the 7th of March I drove to the Mitsubishi Electric Hall in Düsseldorf to witness SAXON’s postponed 40th anniversary Castles & Eagles tour. As most of us know this event was originally planned in October 2019, but due to heart issues of Biff Byford it had to be rescheduled. Lucky for us Biff did recover very well from the surgery and he is back!!! 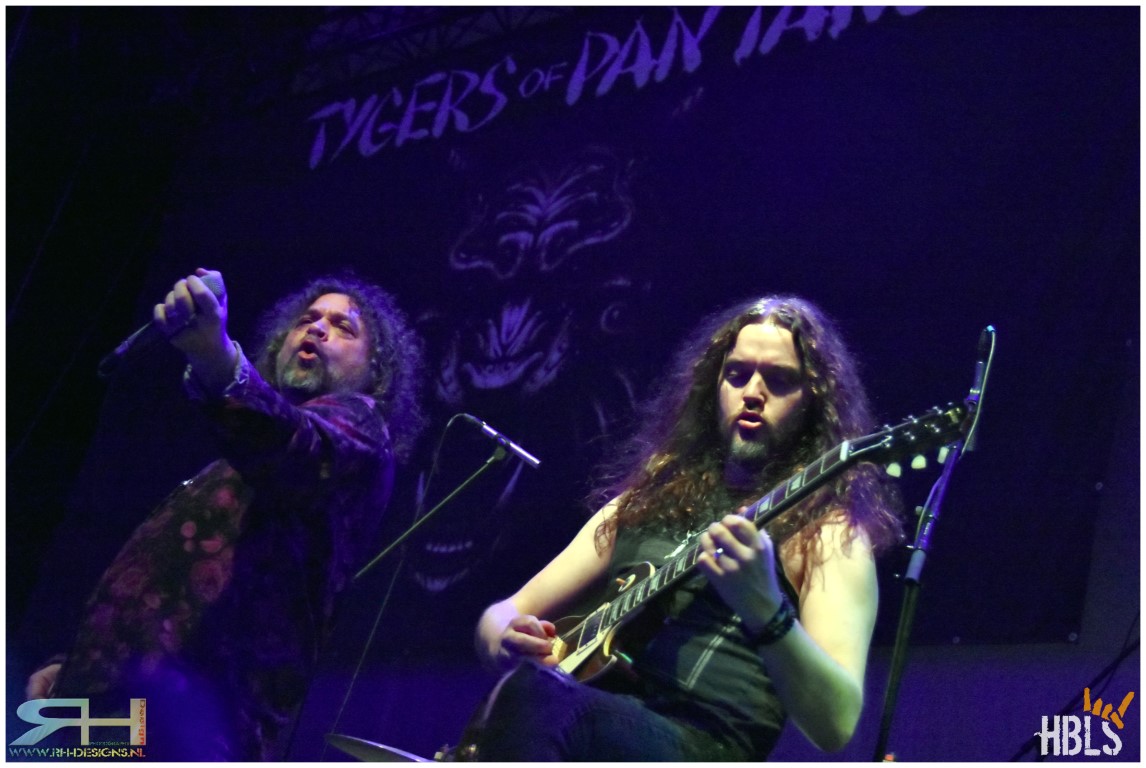 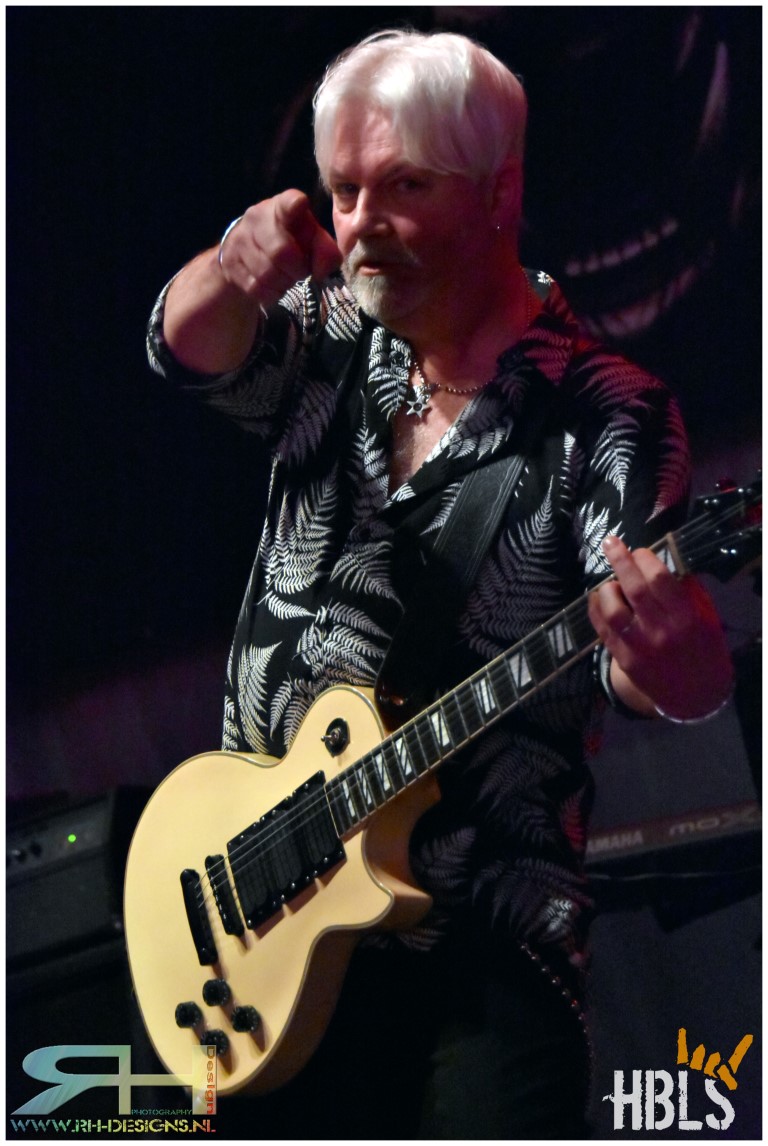 Tonight would be a celebration of the NWOBHM from the early 80s. And as we can see, these bands still are able to fill this beautiful Hall and even the news dominating Corona virus cannot stop the fans from attending the show.
At 6P.M. the Tygers Of Pan Tang had the job to warm the crowd with their songs. This hard working band around guitarist Robb Weir has delivered a strong album with ‘Ritual’ from 2019, and with songs like ,,Euthanasia”, ,,White Lines”, ,,Keep Me Alive”, ,,Destiny”, ,,Suzie Smiled”, ,,Only The Brave” and ,,Love Potion No.9”  the Tygers played a solid show and the attendees not familiar with the band, now know what this band stands for in 2019. A nice opening of the night. 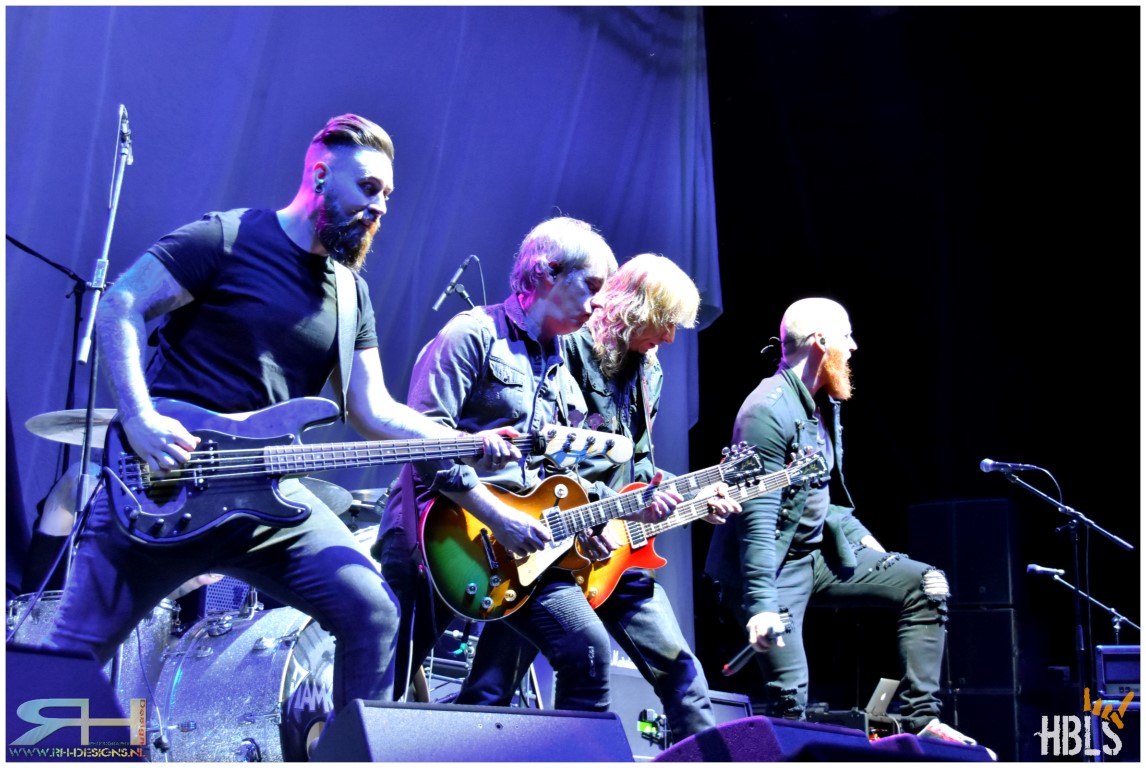 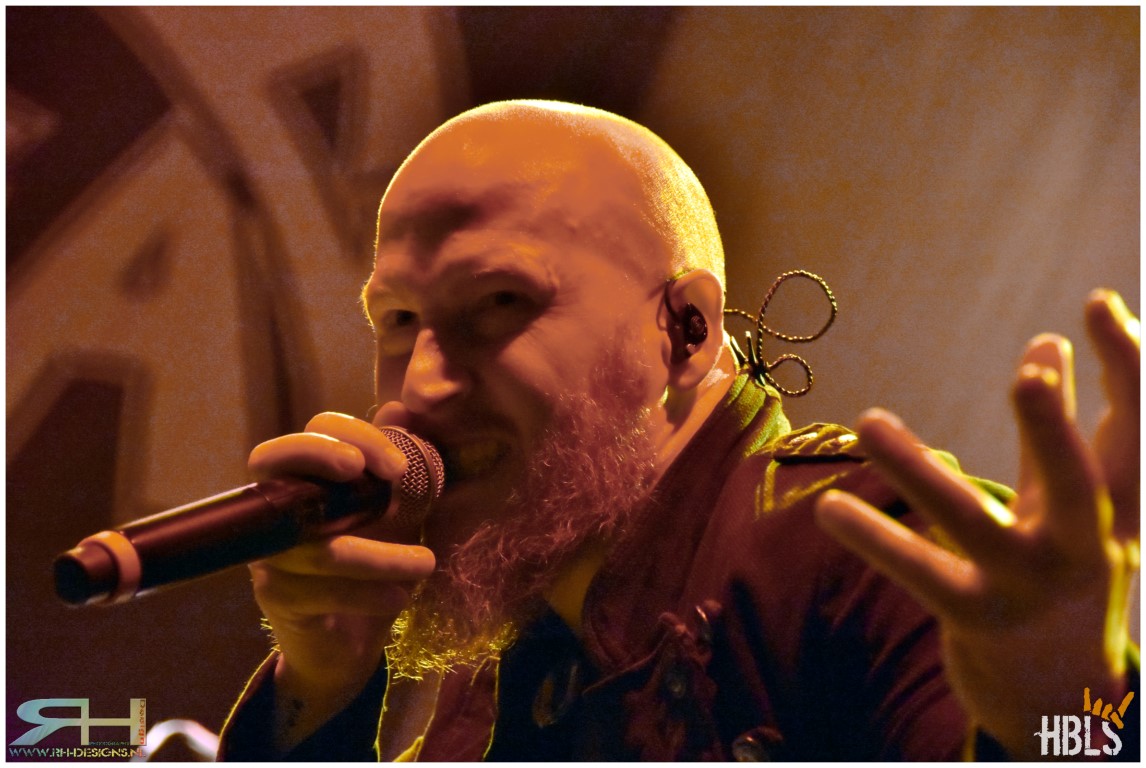 Second band on the bill is Diamond Head, probably more famous because of the fact Metallica recorded a bunch of their songs in the 80s, because they really loved this band. The only remaining original member is Brian Tatler (lead guitar) and, same as the Tygers, Diamond Head still puts out albums, with 2019’s ‘The Coffin Train’ as their latest battle fact.
Lead singer Rasmus Bom Andersen is a very good front man and tries to get the crowd going, during the whole show. The setlist for today was ,,Death By Design”, ,,Bones”, ,,In The Heat Of The Night”, ,,The Messenger”, ,,It’s Electric” and the song the band is probably most known for ,,Am I Evil?”, which also gets the most response from the crowd and remains a timeless classic. 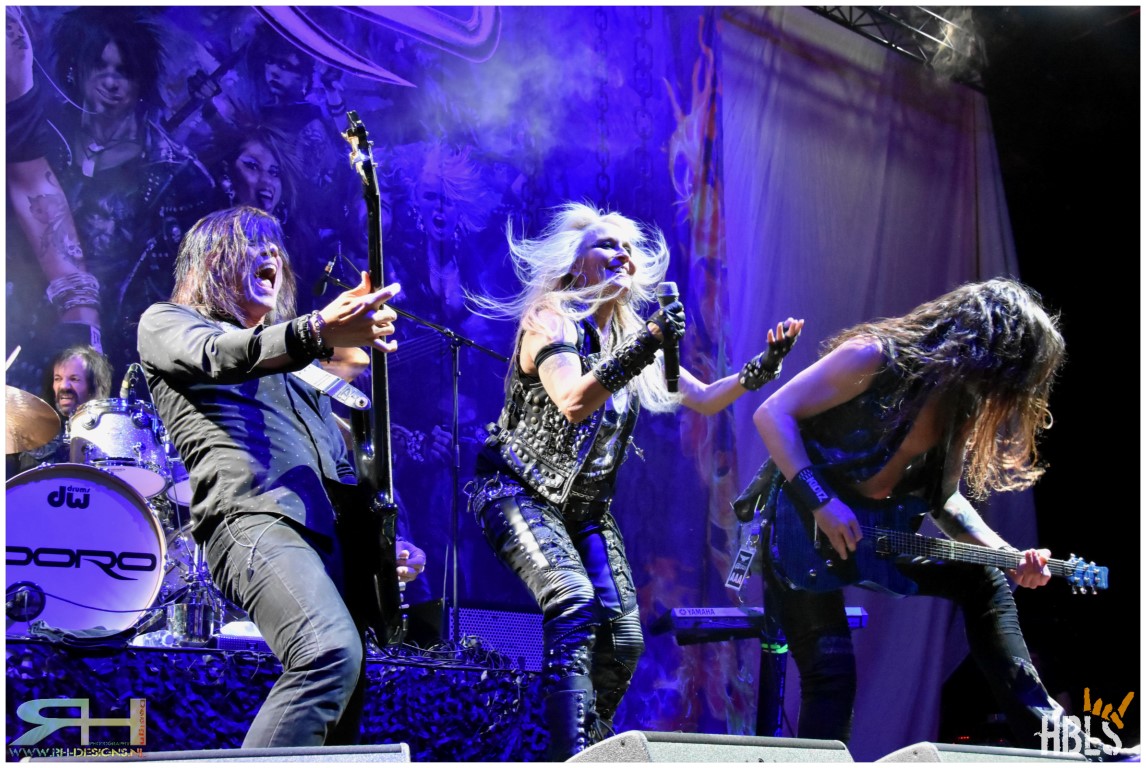 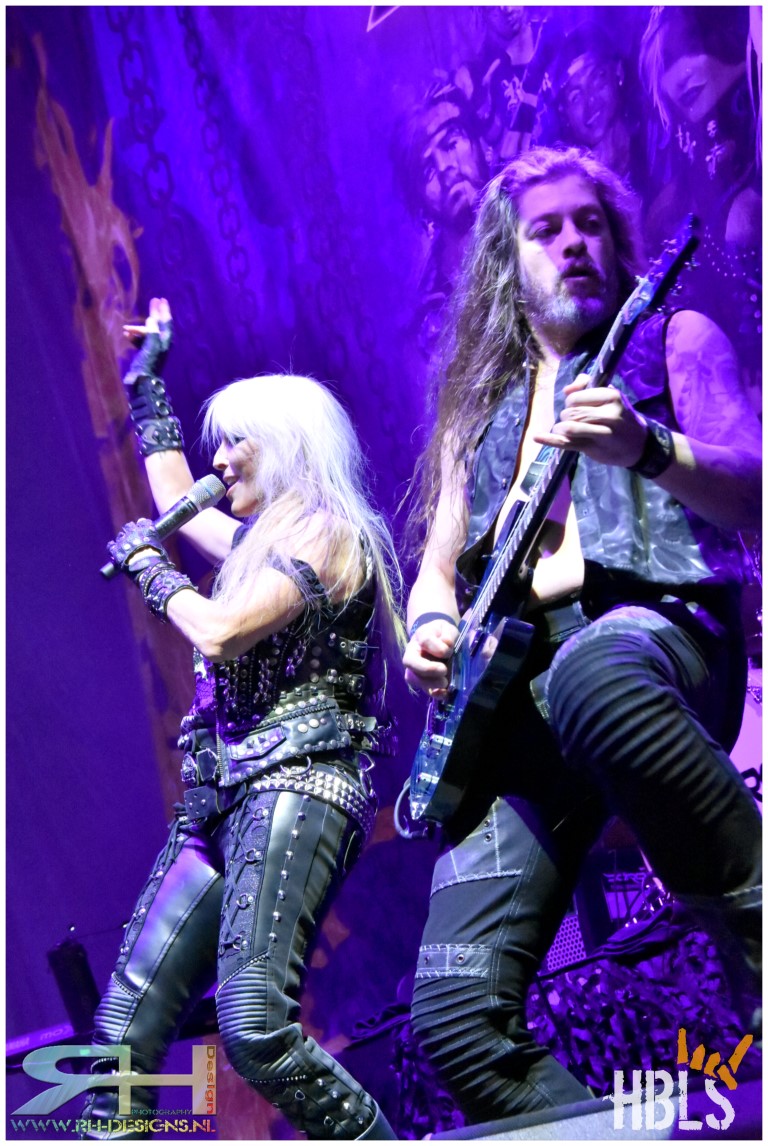 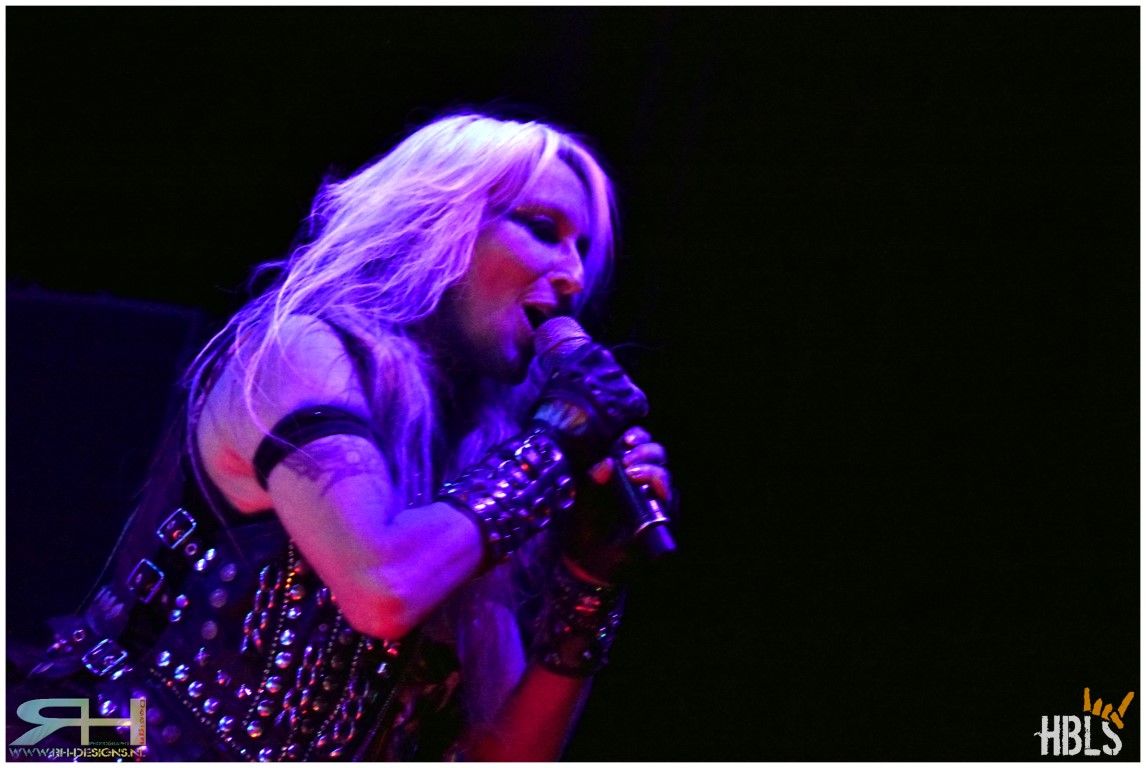 Next up is the special guest of tonight, Metal Queen DORO Pesch and her band. As Düsseldorf is also the birthplace of Doro, this is clearly a special event and honor for her to play here tonight. The band gets more time to play than the 2 opening acts and they treat us with a great best of set. Warlock classic’s all over. ,,I Rule The Ruins”, ,,Earthshaker Rock” kick off the show. The band sound solid as a rock and is all over the stage.
,,Raise Your Fist In The Air”, ,,Burning The Witches”, ,,Blood Sweat And Rock ‘n’ Roll” and ,,Revenge” are next on the list. The interaction with the crowd is amazing and it is clearly the band really has a great time on stage.
As always Doro is very humble to the fans. In between the first two songs a fan shouted for Hellbound and now gets what he has asked for, because ,,Hellbound” is next on the list, followed by ,,East Meets West”, ballad ,,Für Immer” and ,,All For Metal”.
A big heads up for the band Nick Douglas (bass), Johnny Dee (drums) and guitar tandem Luca Princiotta and Bas Maas, as they play their ass off with at least the same passion as Doro herself.
,,All We Are” is the song that officially concludes today’s show, but if you still have some time on the clock, why not play another song. So ,,Burn It Up” is the final song for today.

The band fully deserved this Special Guest slot on the bill, because the crowd really got warmed up for the main attraction of tonight. 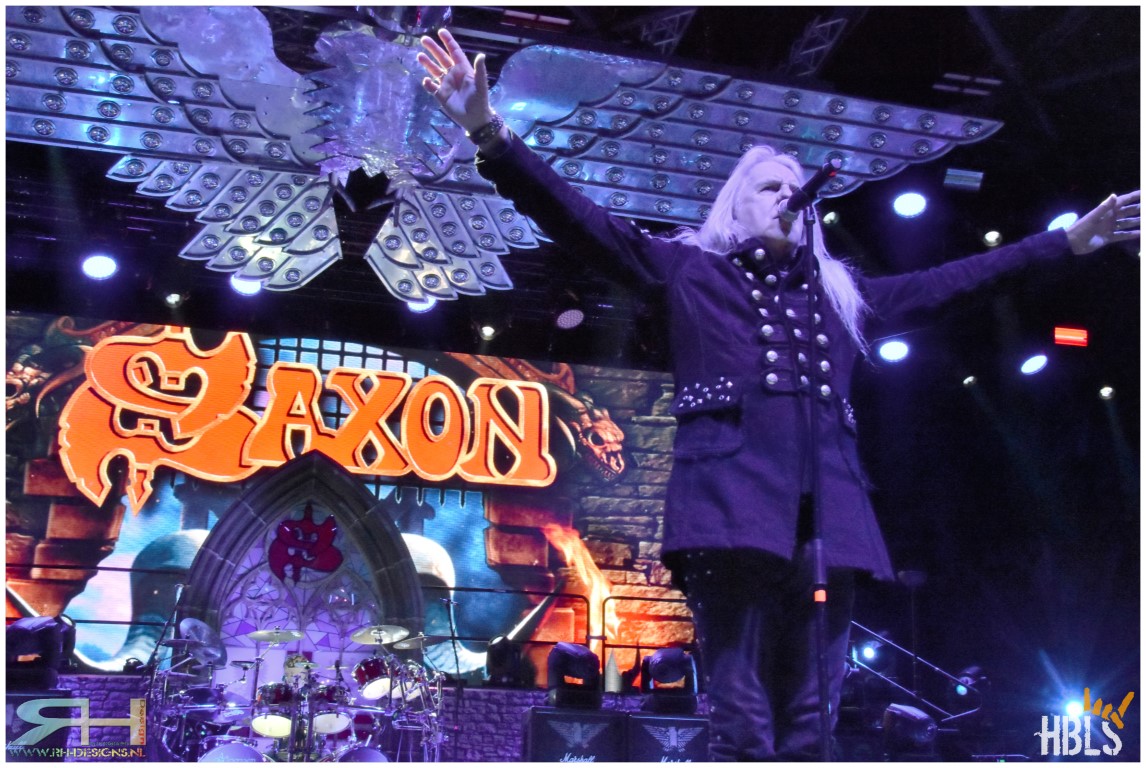 And then it was time for main attraction SAXON to take the stage and hold it no less than 2 hours of the finest of 40 (and a bit) years of Saxon. As I referred to before the show was postponed and rescheduled. Biff Byford has just released his first ever solo record “School Of Hard Knocks”, now catches up the Saxon 40th Anniversary dates, has a solo tour planned (which in the meantime is cancelled as you can read here) and Saxon summer festival dates coming up. So it is more than fair to say: BIFF is Back in business and busy as hell!!! 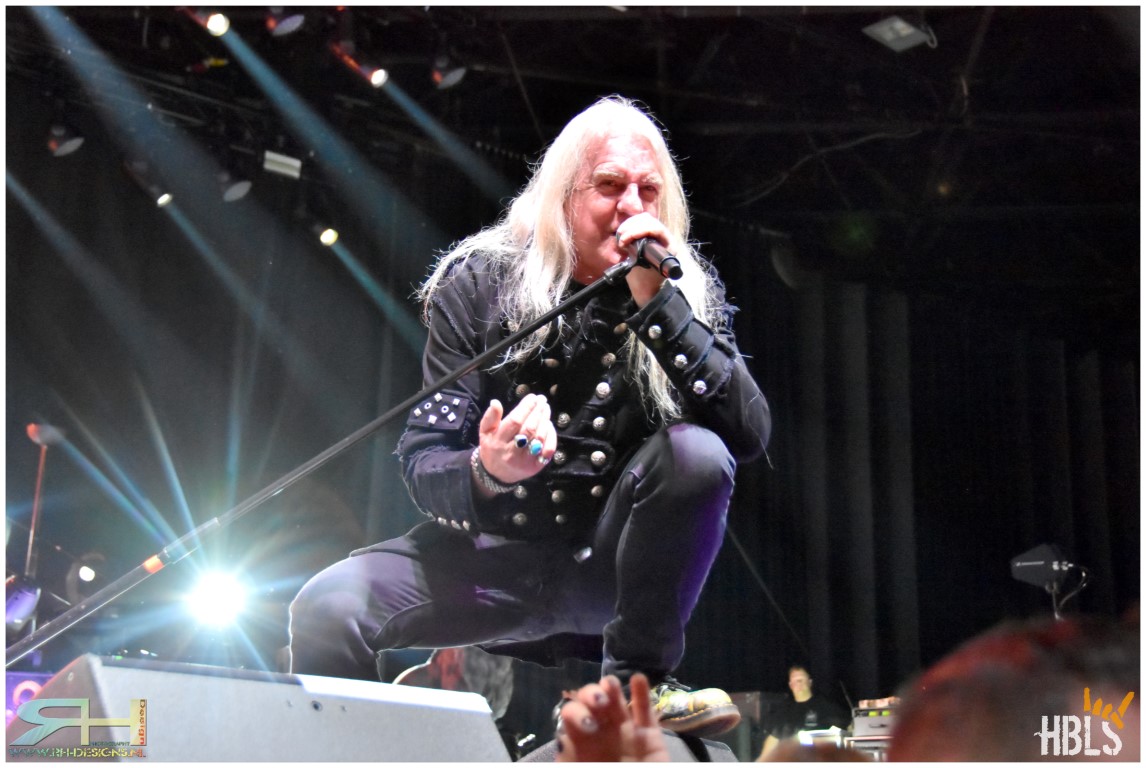 Show opener is ,,Motorcycle Man” and from the first minute on they own the stage and the venue. Saxon means business. The stage looks amazing with a giant eagle and drummer Nigel Glockler who finds himself in the middle of a giant castle. The immense video wall makes sure we get to see the finest of Saxon history, which gives the songs even more power.

,,Battering Ram”, ,,Wheels Of Steel” and ,,Strong Arm Of The Law” are the next songs on the list. Biff is on fire, singing like a young god. For the next song long time friend Doro, joins the band on stage to deliver ,,Denim And Leather”, followed by ,,Thunderbolt” and ,,Backs To The Wall”.
Mr. Byford recalls the last time they played the venue (back when it was the PhilipsHalle) as support for long time friends Motörhead. And the last time they headlined the Hall which was in 1986, with the addition that he is glad to be back as a headliner tonight.
The next song was written about Motörhead, when they were on their first tour together, back in 1979, ,,They Played Rock And Roll”. 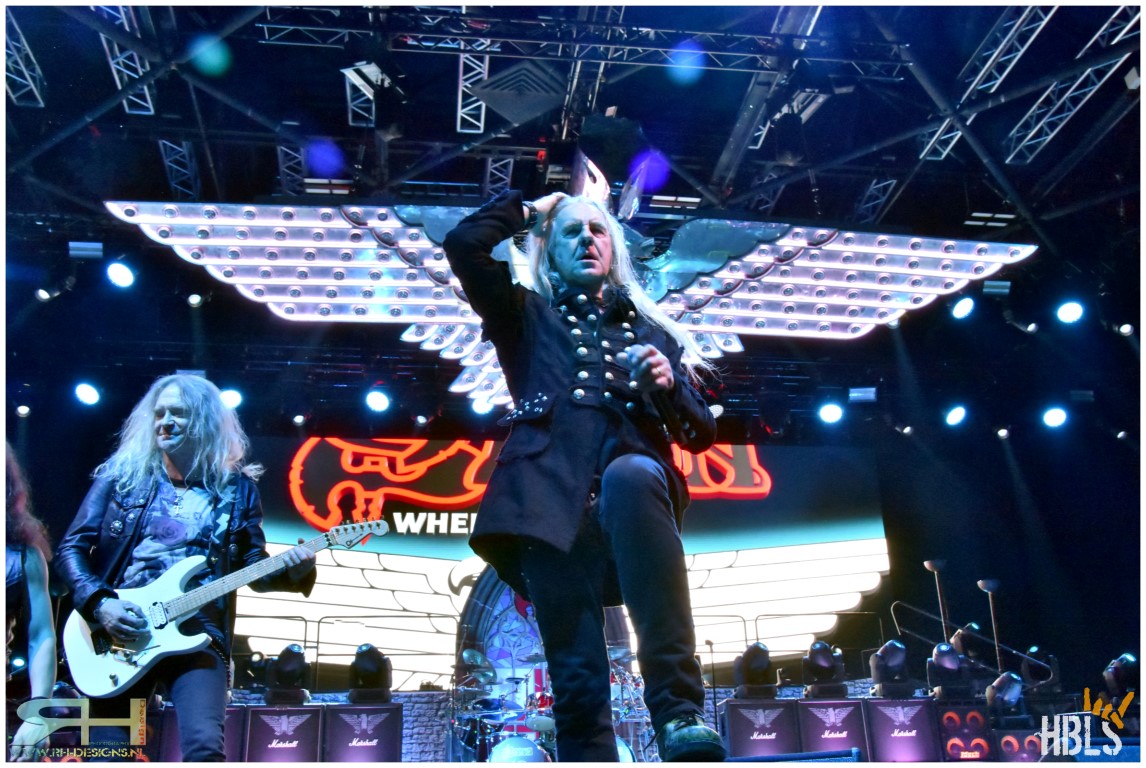 As I mentioned already the band is in great shape, Mr. Paul Quinn and Mr. Doug Scarratt on guitar, Mr. Nibbs Carter on bass and Mr. Nigel Glockler on drums.
Next up on the menu is ,,The Eagle Has Landed”, followed by ,,Battalions Of Steel”, ,,Dogs Of War”, ,,Solid Ball Of Rock”, ,,Dallas 1 PM”, ,,And The Bands Played On”, ,,To Hell And Back Again”. 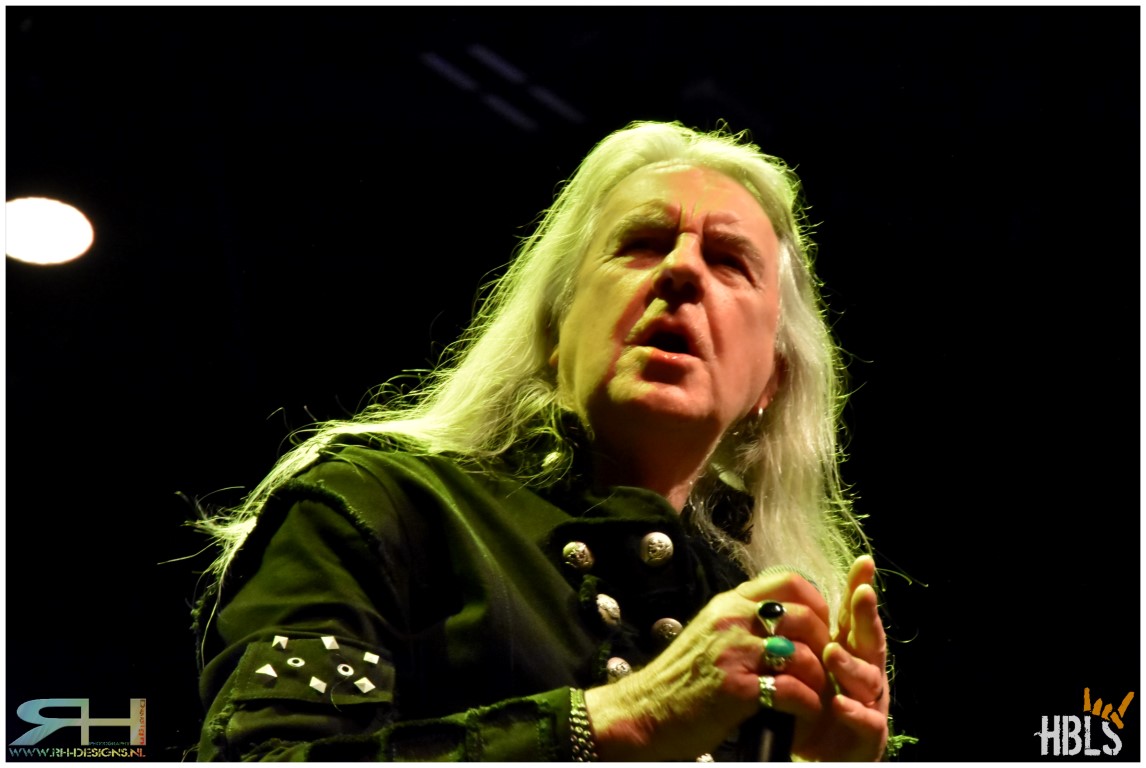 The last two songs of the  first part of the setlist are ,,Power And The Glory” and ,,Heavy Metal Thunder”, but by no means this is the end of the evening , because for the encore we do get amazing NWOBHM classics like ,,Crusader”, ,,Never Surrender”, ,,747 Strangers In The Night” and the last one to wrap up the show is ,,Princess Of The Night”.
To be honest, there is nothing to complain about what we got to see tonight. Four bands with roots in the end of the 70s, early 80s that still rock hard. The musical legacy of Saxon is immense and I am glad to see they are still the force they were when I did see them in the past. Saxon delivers!!! What a great show and I think the ones who have seen the show tonight will agree. 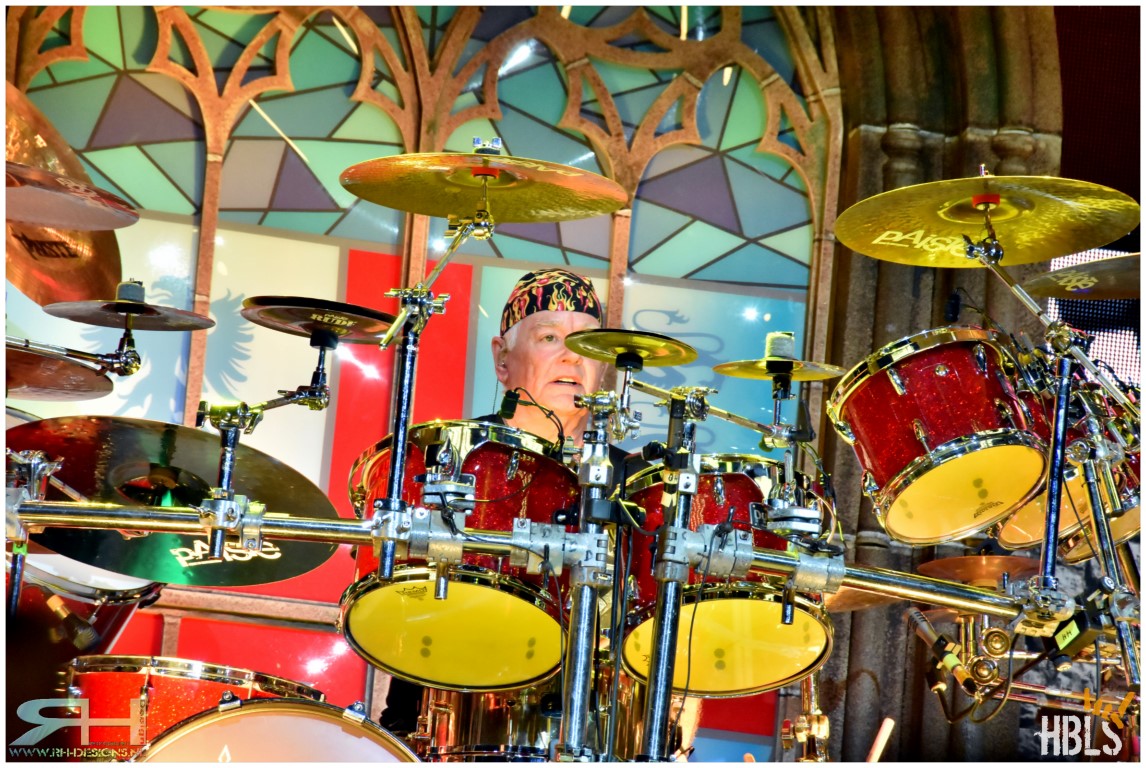