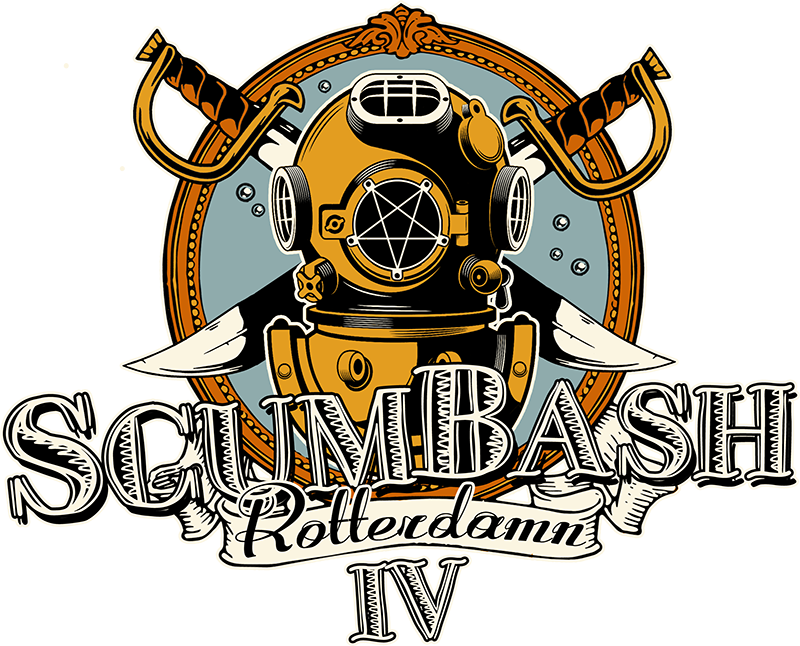 ScumBash is “One day of goddamn rock ‘n’ roll”, courtesy of Schorem Haarsnijder & Barbier, the notorious old school barber shop in Rotterdam, style. In 2014 the Schorem crew organized a festival with bands they usually play in their barber shop. The first three editions took place at the Unesco world heritage site ‘Van Nellefabriek’. The new location is 100% Rotterdam and mind blowing, in the middle of the famous harbour at the ‘RDM onderzeeboot loods’. In ScumBash language ”the first submarine wharf in the world with a toilet for the disabled. And by disabled we mean folks on crutches or in wheelchairs, not stumbling drunks (although we make an exception for delirious dwarves)”. ScumBash is for real music friends, a celebration of the whole spectrum of rock ‘n’ roll and its lifestyle. An impression by Dirk van den Heuvel for HeadBangers LifeStyle. 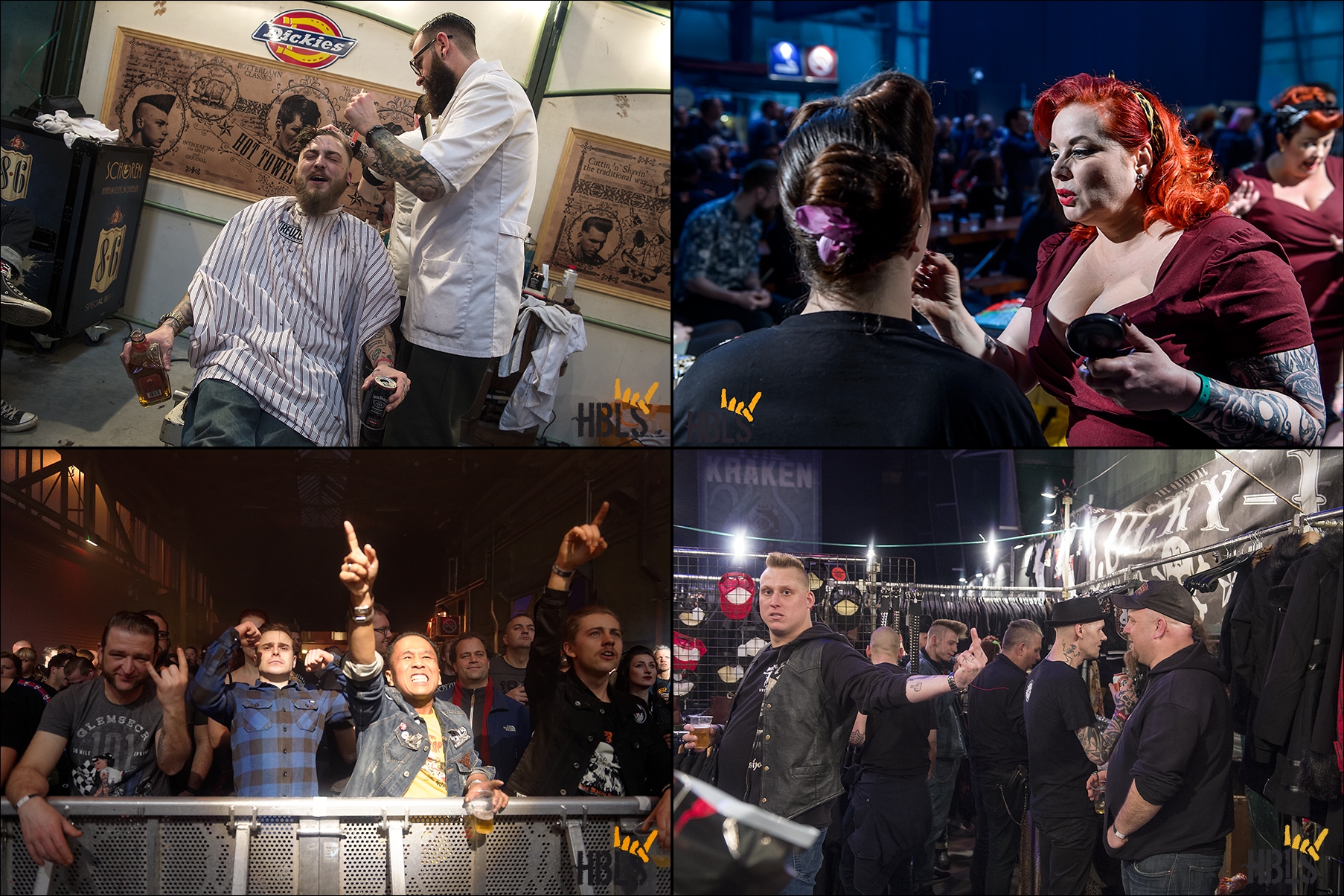 The Introduction
Next to the music, men can get their hair fixed by the Schorem crew (only men off course), women can have a classic make-up and hair style treatment by Miss Lipstick and Miss Updo from the Vintage Vixen and there are three tattooshops (Inkstitution Tattooing, the Office Electric and Andy’s Body Electric Tattoo) for some new ink.
Don’t forget to take some damn good food at Hans Worst (best dogs you’ll ever eat), the Burger Brothers (prime beef and pulled pork from the grill), Mom’s Chili Burger (vegan food) and Rudy’s Roadkill (with the greasiest cheese steaks ever). And of course, there is lots of booze.

For 2 euros you could also buy a raffle ticket for the big ScumBash lottery. All proceeds would be donated to the ‘Daniel den Hoed Foundation’ in support of cancer research and cancer therapy.

The Music
On three stages (the small Voodoo stage, the middle Jack Ketch stage and the mainstage Kraken) you could watch 20 acts from Country to Punk and everything in between.
While people were coming in and took a first beer The Def Americans paid homage to the late and great Johnny Cash. The sound at the Voodoo stage was good and when there was no band playing, the deejays played music that you can describe as “goe vur in den otto”, meaning ‘real car music’. Classic music to clap your hands and stamp your feet. 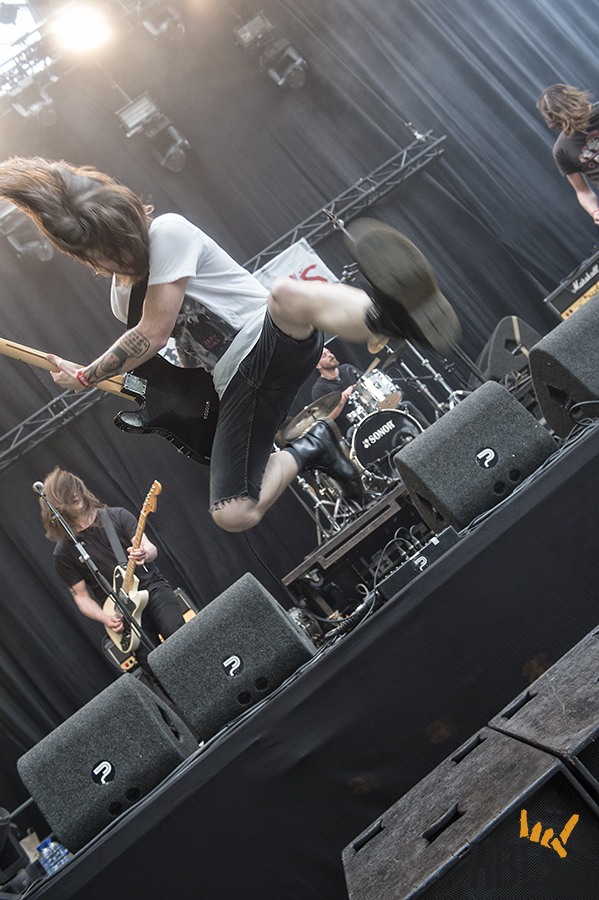 Opener on the Jack Ketch stage was Order of the Emperor from Rotterdam. They play classic hardrock with lots of melody. The next two bands were from Sweden. The Kendolls, with their high energy mix of punk rock, classic rock and some hardcore, did a good job but it seemed like the sound engineer hated bass tones. This turned out to be a recuring problem throughout the day. Bands with their own sound engineer had less problems. 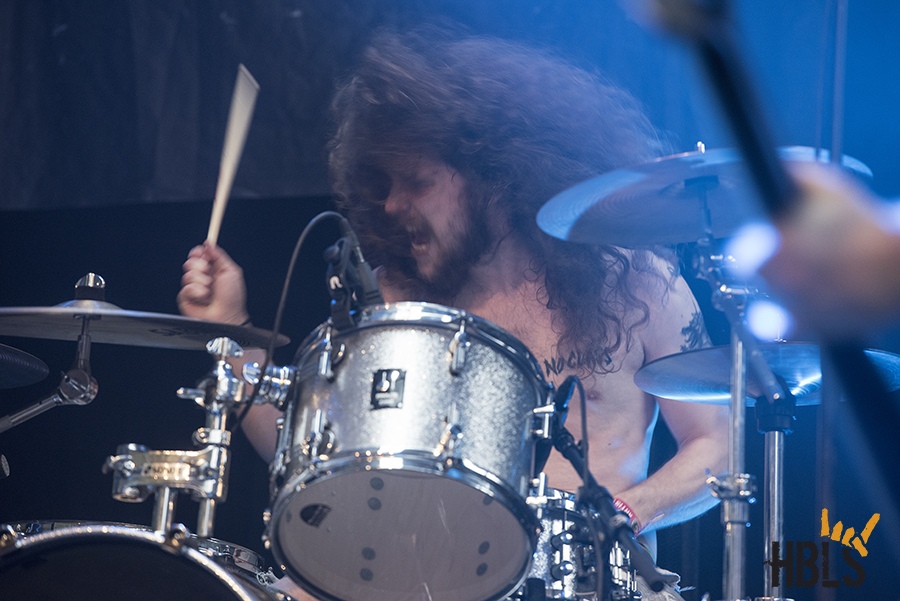 Scumbag Millionaire is a high energy action punkband, straight out of ‘the gutters of Gothenburg’ and they kicked ass like they promised. 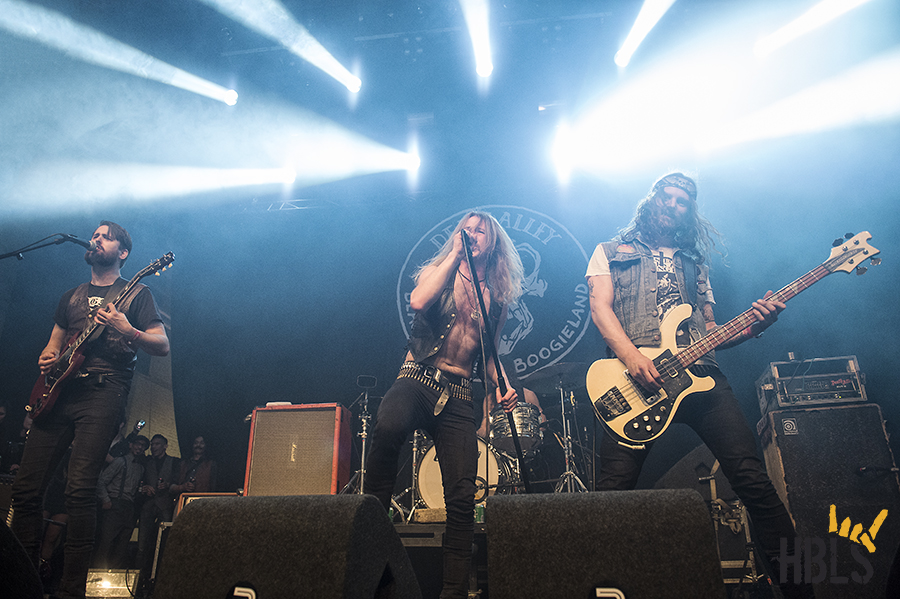 Death Alley from Amsterdam with its dirty seventies heavy rock, has a lot of fans in Rotterdam. Since their debut album in 2015 they’ve grown as a live act and they played a very convincing set. Berlin’s Kadaver was next. The psychedelic retro stoner rockers are famous at ScumBash. The floor in front of the stage was almost filled and the band was in an excellent shape. Good musicians and a great drummer with a lot of hair and beard. 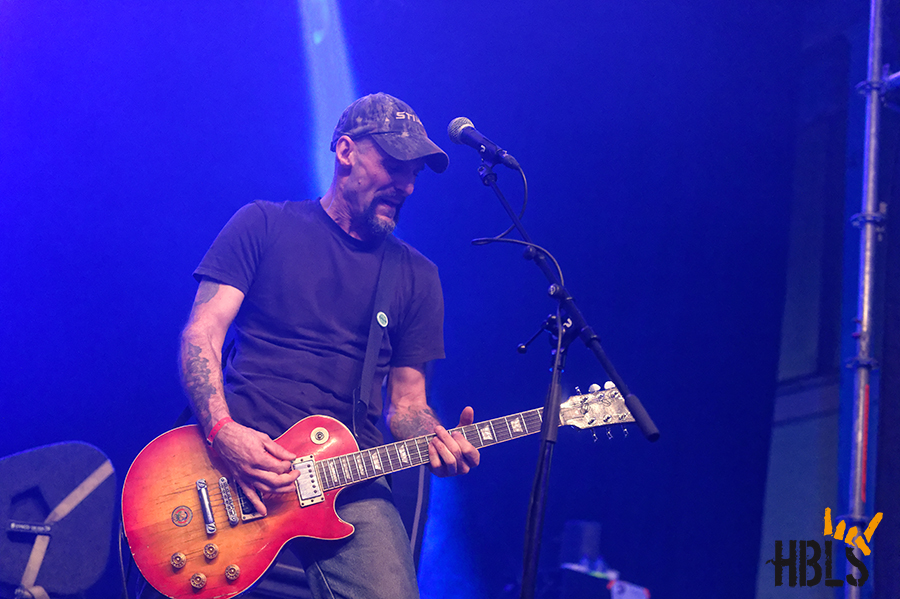 The last band on this stage was the legendary Zeke with bandleader and guitarist Marky  Felchtone. Speedfest tried to contract them for 10 years without any luck. Now for the first time in Europe since 12 years ScumBash presents Zeke. The place was packed. Other musicians were standing on the sideline just to watch them. In the 50 minutes they had, they played punkrock with a enormous speed. Unfortunately the sound was bad, so it was hard to hear Marky’s speedy guitarsolos but at least we had seen them. 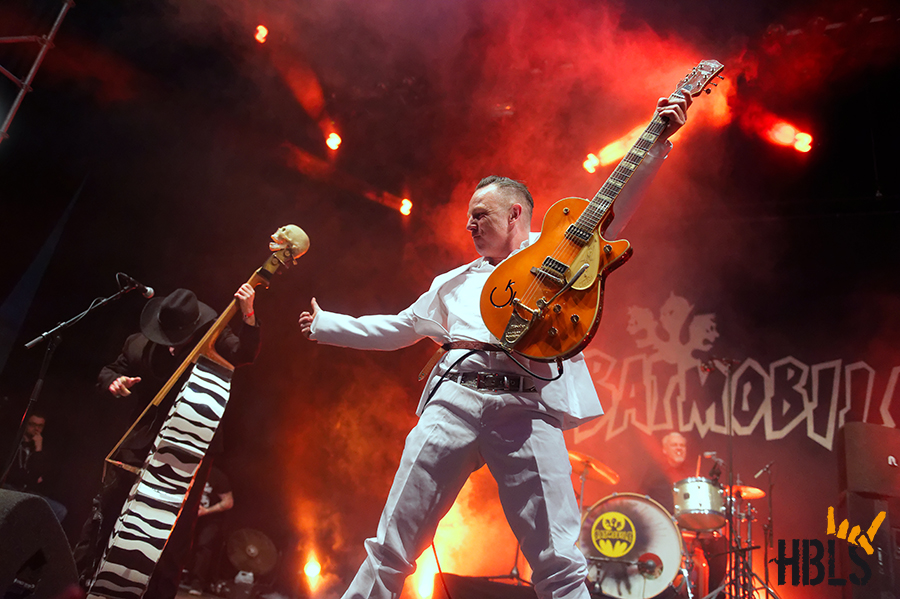 The Kraken is full when it starts with the psychobilly, eh.. sorry B-music legends and ScumBash house band Batmobile. After 20 years… today… is the release party of their new album ‘Brand New Blisters’. This is the band that everybody love and wants to see every year. The trashmetal from Legion of the Damned is definitely the odd one out. They play a good show but it’s not everybodies cup of tea.

The Danisch-American psychobilly gang of Nekromantix gets the full attention of the audience. The coffin bass, the horror monster lyrics and the great performance make it a great show for the fans. 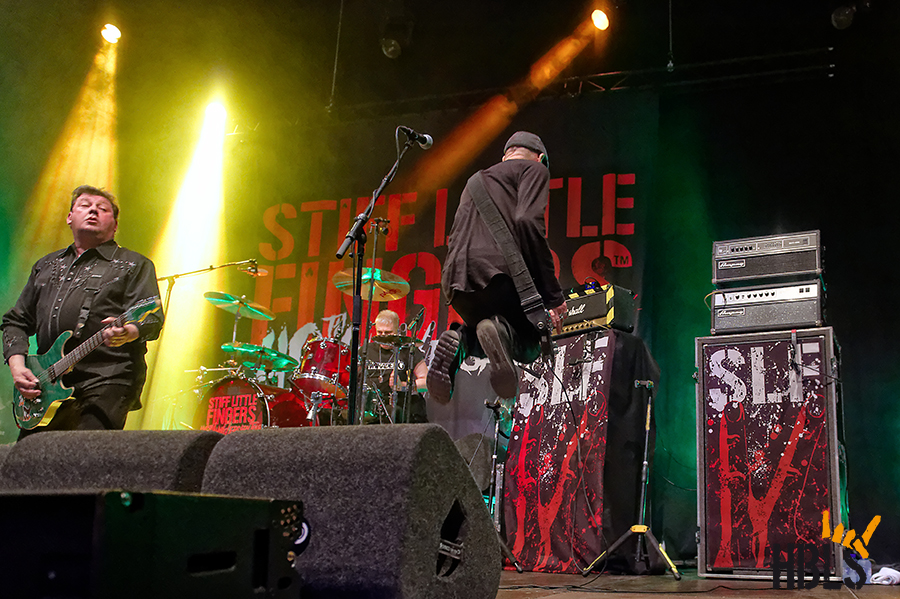 The rockabilly punkrock of Stiff Little Fingers from Northern Ireland gives a solid performance with only the bass player really moving around. Last band on the Kraken stage, playing their last show ever are Dutch hardcore legends Backfire! from Maastricht. A great way to end ScumBash but unfortunately, by that time, a lot of people already left which was a shame.

In Conclusion
ScumBash did it again on a new an even better location than before. See you next year! 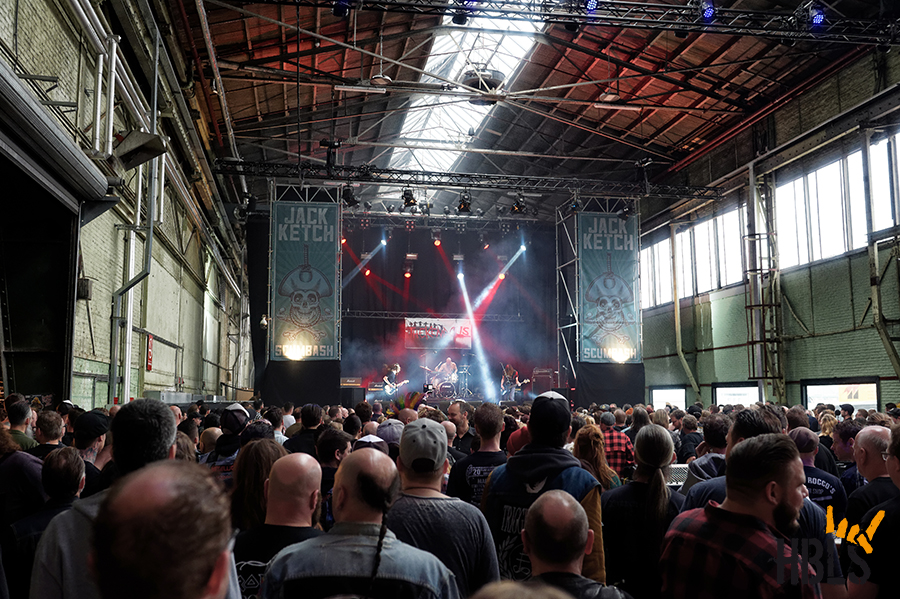