Agony In The UK – Tour Report

It has been a while since Life Of Agony toured in the UK. Therefore the anticipation of the fans was huge and the shows almost sold out before this tour had even started. Especially because this tour only consisted of three shows, and privileged those who live in London, Wolverhampton and Manchester or in their surroundings.

After the big tour success in Germany in January this year, the Brooklyn original decided to invite rock sensation Second Function, from Switzerland, again to share the stage with them. It was for sure the perfect package as Second Function and Life Of Agony are so completely different in sound and lyrical output, but still are connected to each other in a way and definitely not a boring combo for the fans. I had the privilege to travel with Second Function as their tech and experienced the shows from as close as possible. 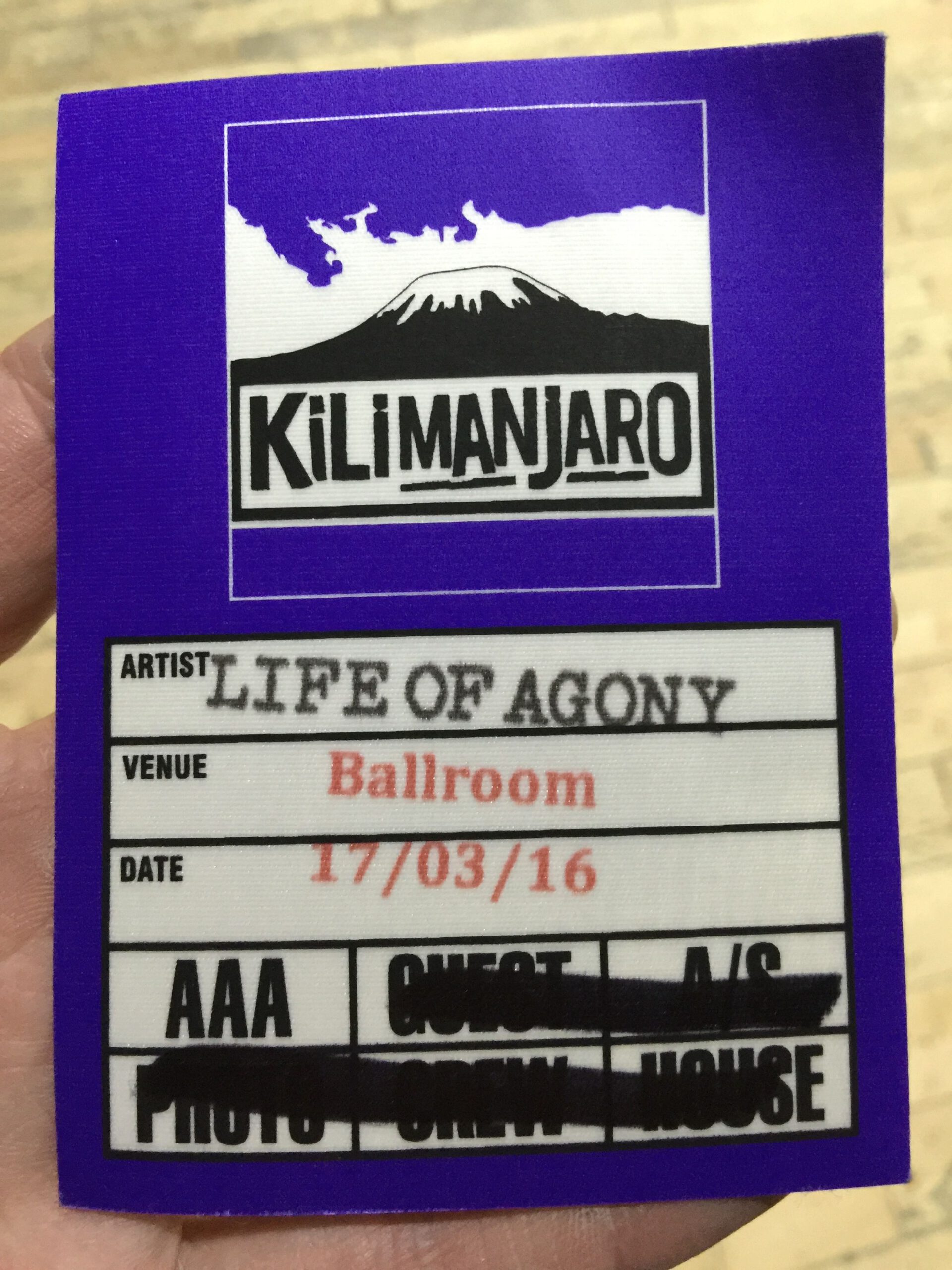 LONDON, ELECTRIC BALLROOM, March 17 2016
After a long travel day (fly to London Heathrow Airport, get picked up by our driver and found ourselves in a terrible traffic jam in London), we arrived at the first venue, the legendary Electric Ballroom in the heart of Camden. As a touring band, it is a challenge to deal with your gear and find a place to park your van. Luckily we made it.
Obviously two things were different then we experienced so far during any other tours; Catering and curfew. Catering never happened at any of the locations and the curfew was usually around 10:30/11:00pm, then the club was completely wiped out and emptied.
With the rented gear, Second Function used the limited time they had for a proper sound check. 7:55pm I started the intro to a pretty filled venue (we expected around 1.000 people which was almost sold out). The reception of the 30-minute set was amazing and a good indication for the remaining two shows. That night Life Of Agony killed it and delivered a set of mainly old school songs of the first two albums. When everybody was kicked out of the venue, we decided to go out and party, which was a big challenge since all the pubs close at 11:00pm. Eventually we found a place to have our drinks and enjoyed the success of the first night. 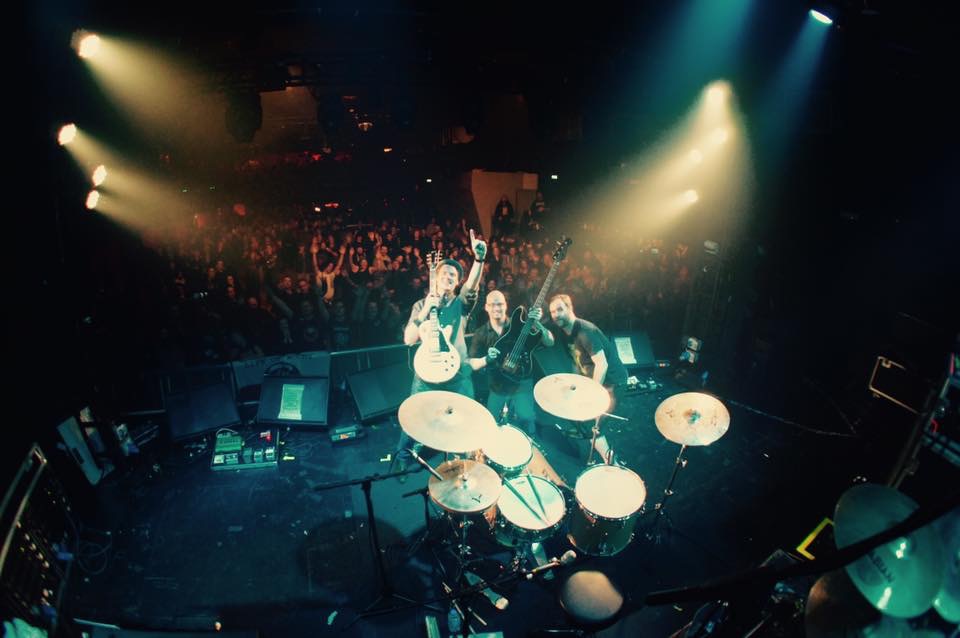 The guys of Second Function celebrate their victory

WOLVERHAMPTON, SLADE ROOMS, March 18 2016
After we slept in a cosy rented apartment somewhere up in Camden, we used our free time to do some sightseeing and split up. The main gang decided to travel down to Carnaby Street while I remained in Camden with Lukas, the drummer of Second Function, to check out the area around the Camden locks. The majority of stores were all closed, but we didn’t have much time anyway, so we decided to go for proper fish and chips and back to the bus, where we met the others. Due to the heavy traffic, it took us about 3 hours to arrive in Wolverhampton which seemed to be the place not to be compared to London, where we just came from. 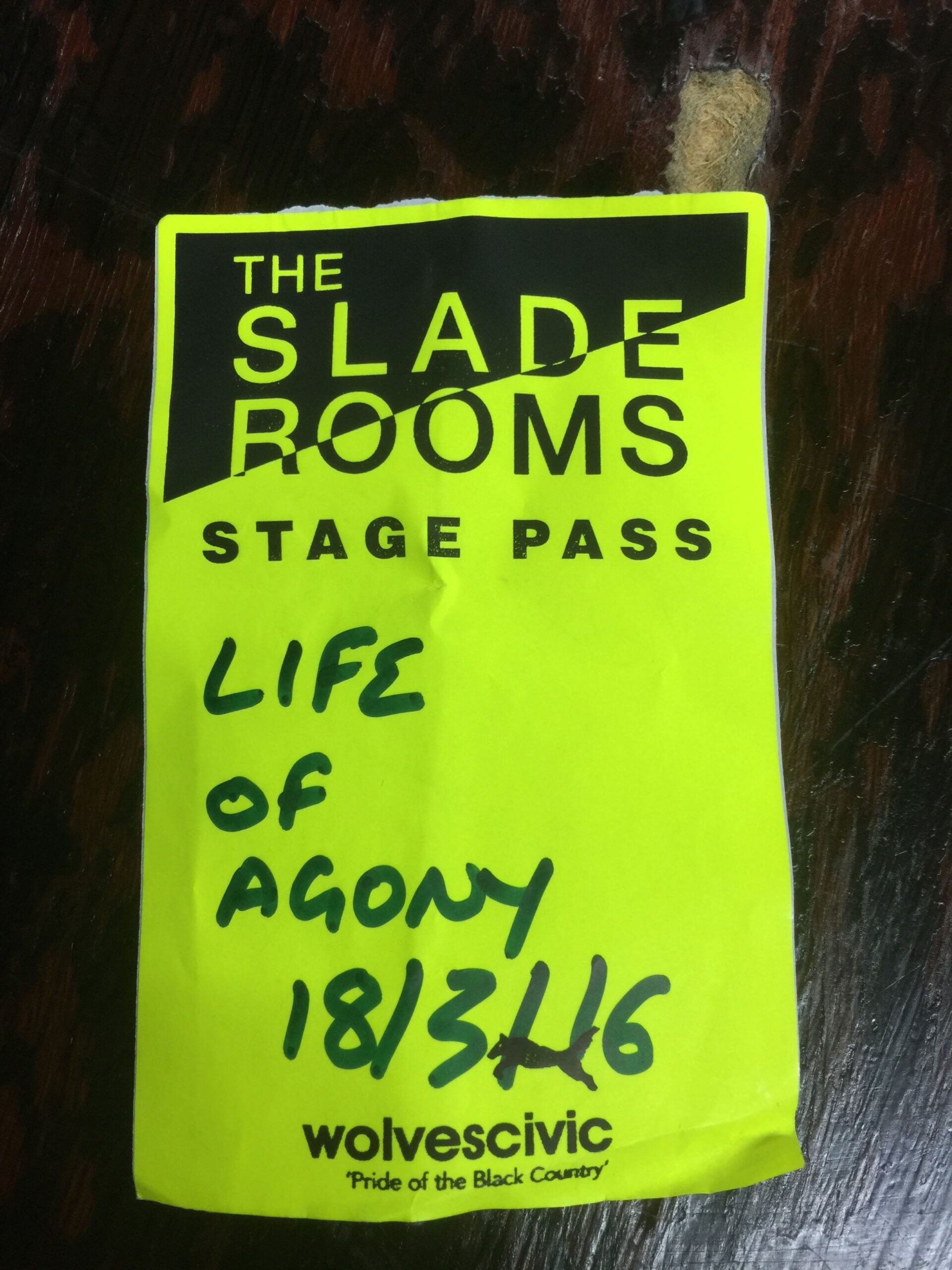 The Slade Rooms itself, tonight’s venue, was a challenge as well in many ways: the stage was so small, that Sal Abruscato, drummer of Life Of Agony, offered to move his drum kit from the stage completely, so Second Function would have enough space to do a proper show. As the world has arrived in 2016, we were also very surprised that Wi-Fi didn’t work at all in this place, neither for the support band, nor the main act. Sound check was done quick and dirty for both acts and Mina Caputo used the time before the show to say hello to us and express how happy she was to have Second Function back with them on the road. 7:55pm, it was already intro time for Second Function. The guys felt warmed up from the night before and killed it in front of a half empty club. The audience enjoyed it very much though and sent Second Function to the dressing room with a big applause.
After some technical difficulties, Life Of Agony blasted their set into the crowed as there would be no tomorrow. Again the audience enjoyed it but the atmosphere didn’t actually started to turn into a magic night. After the show we used our time to interact with the fans and selling merchandise. Second Function was happy to meet some of the fans that travelled already to all the German shows and had now been apart of the three UK shows as well. The after show in Wolverhampton ended with drinks in a pub and a midnight pizza, which led us back to bed in a nice hotel in town. The hotel was nice until 4am; the fucking fire alarm started to ring and didn‘t want to stop. So we had to get out of the building to wait for any instructions, which didn’t actually happened at all. 45 minutes later, we finally got informed about a false alarm. At last we could go back to the rooms, but our night was ruined. MANCHESTER, ACADEMY CLUB, March 20 2016
With a hangover and lack of sleep because of the fire alarm, we jumped into the bus to escape from Wolverhampton and travel to our last destination in Manchester. As we arrived early, we had the time to explore the city of Manchester before getting back to the venue to prepare for the final show of this tour. Manchester was almost sold out and we expected this gig to be the perfect ending of a wonderful short trip to the UK. As in Wolverhampton the night before, also the Wi-Fi in the campus of Manchester Academy didn’t work at all. It was really surprising to us, how a simple technical feature seemed to be so hard to set up.
But nevermind, Second Function had other issues to solve. Our backstage room was rather one floor up, through the hallway, passing the door to go another floor up to finally arrive in our privacy room. Well, at least we had beer, which we pro-actively took down to the stage area. 7:55pm again intro time. The venue was already packed and the audience enjoyed every minute of the performance of Second Function. The guys were really on fire tonight and warmed up the crowd perfectly for the best show by Life Of Agony on this entire run. The people went nuts from the first chord until the last one. 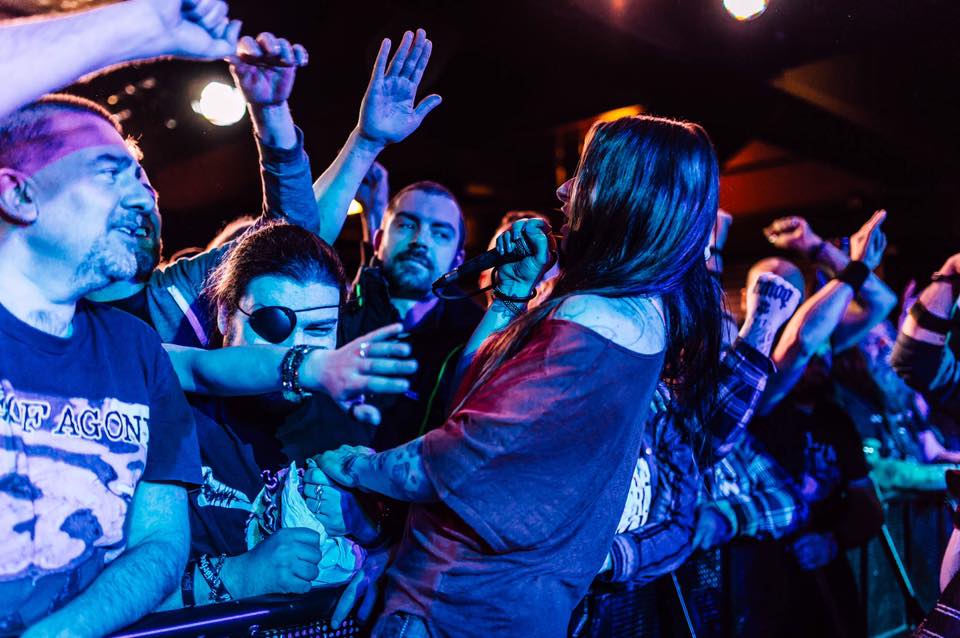 After the show we took the opportunity to thank the band for the amazing three days and took a picture together to memorize this little adventure.
Since this was the final show, we dropped off our luggage at the hotel, went for food and found one of the coolest rock and metal clubs I’ve ever been so far: Satans Hollow.
Good drinks and an amazing sound made us hang out until the early morning, before we went to sleep and travelled back home to Zurich the next day. 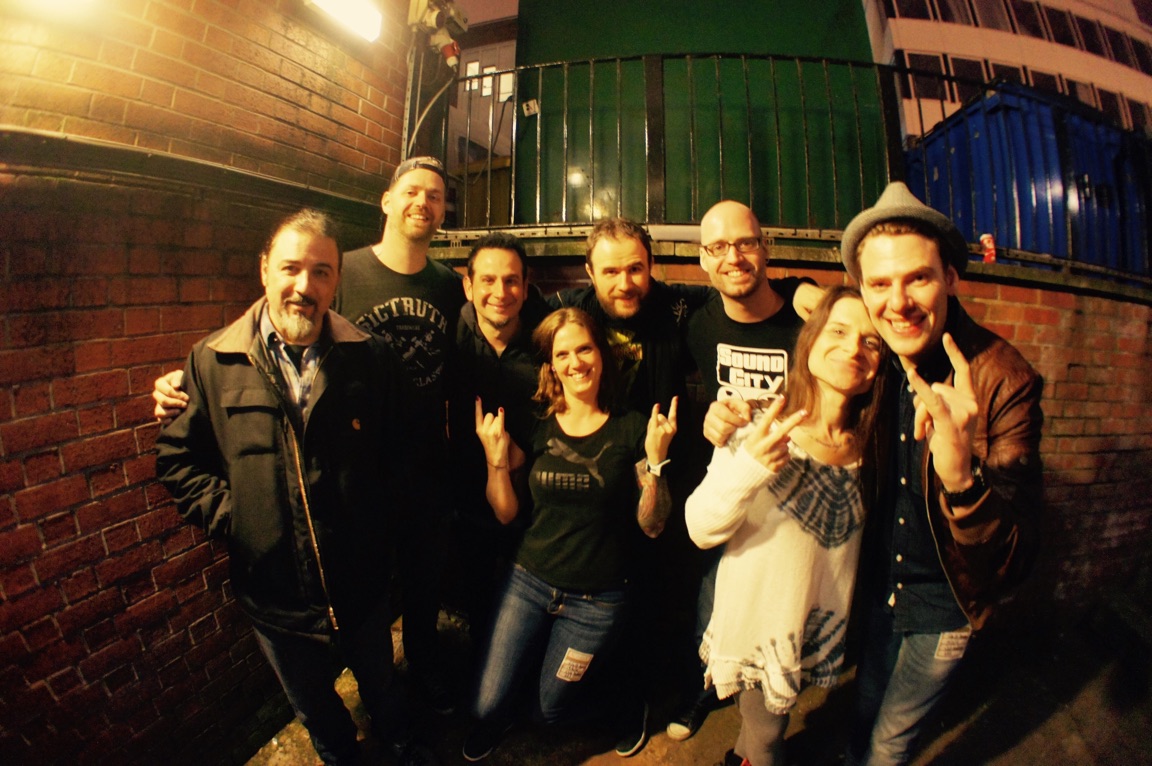 Second Function & Life Of Agony; thank you and goodnight!

I want to take the opportunity here to send out a BIG THANK YOU to Second Function to take me with them on tour and the amazing time we had, to our crew Regina for Merch and Chris our driver/part time babysitter-tour manager-grumpy old cat 😉 and last but not least to the amazing people of Life Of Agony, Mina, Joey, Sal, Alan and tour manager Rich, for the hospitality. You guys are the nicest people I have ever met.
—
Follow Life Of Agony on Facebook
Follow Second Function on Facebook