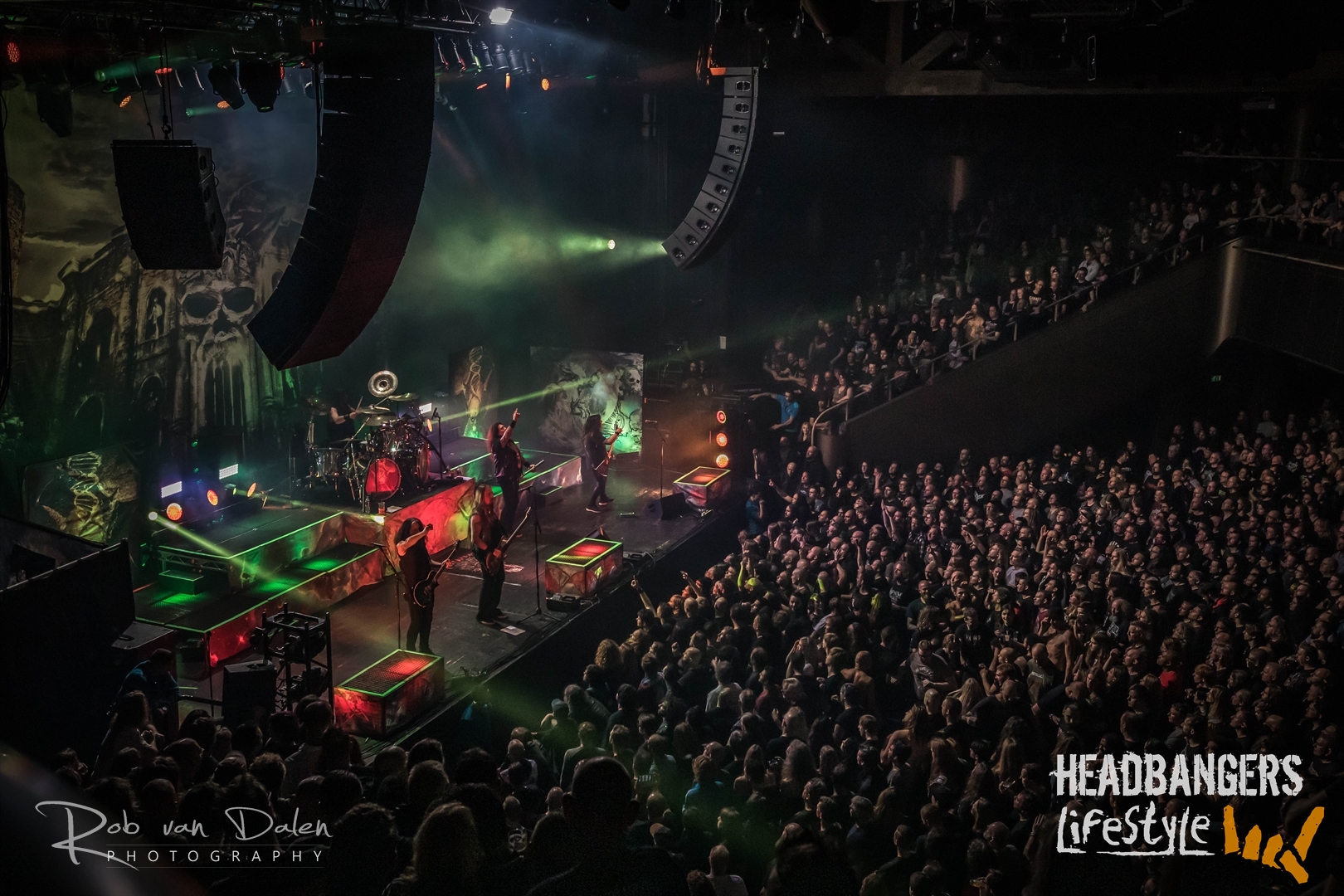 While Storm Dennis kept most of the Netherlands in its fierce grip, three old school Thrash bands from the San Francisco Bay Area caused even more havoc and chaos at the TivoliVredenburg Ronda, Utrecht, the Netherlands. Death Angel, Exodus and Testament are currently touring throughout Europe as ‘The Bay Area Strikes Back’ and are leaving a trail of damage behind them that puts Storm Dennis to shame. 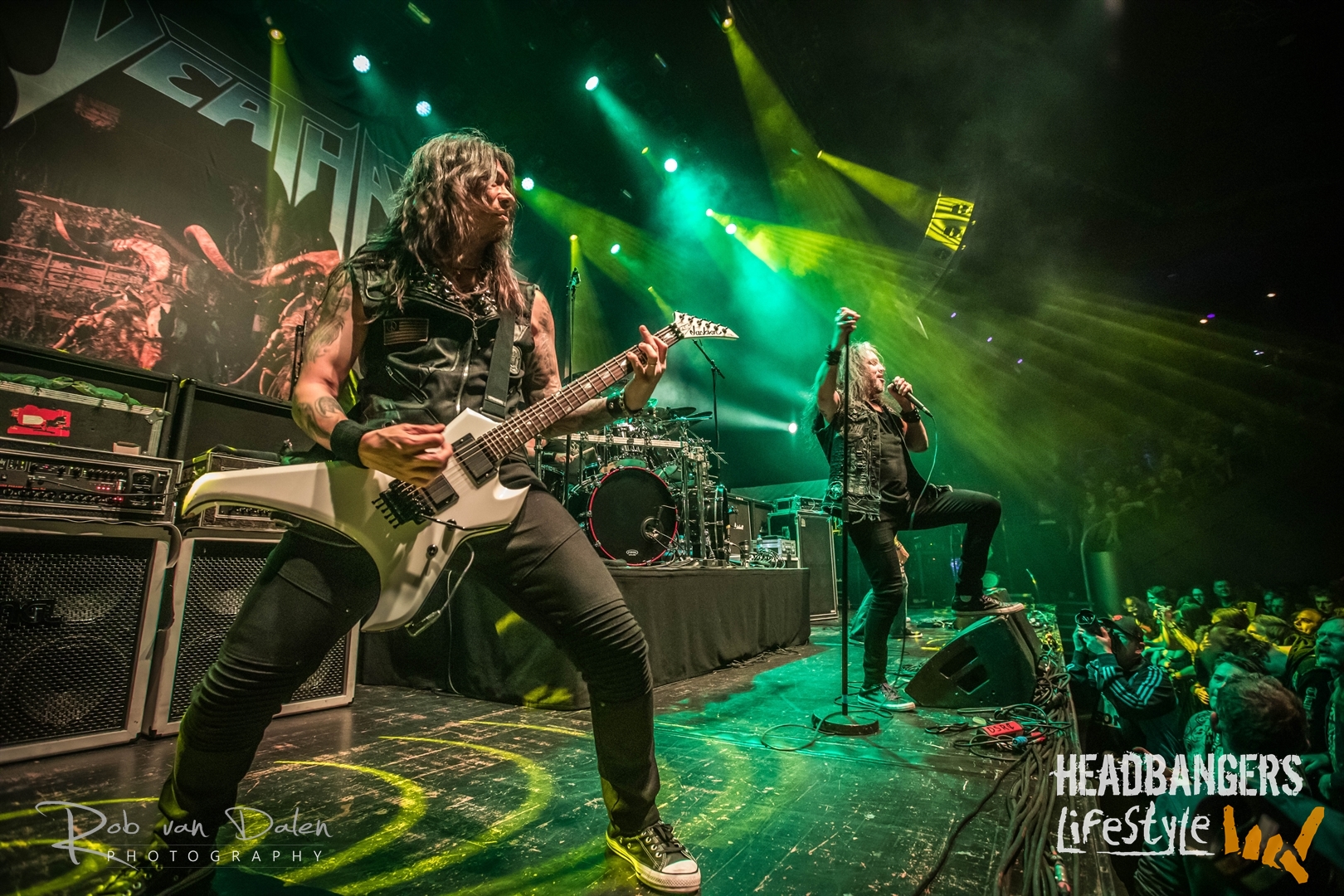 Death Angel kicked off the evening with the title track from their most recent album `Humanicide’ and it was abundantly clear that Death Angel would take no prisoners to win over the crowd in Utrecht. It only took until the second song, the all-time classic ,,Voracious Souls”, for the crowd to go completely insane and so emerged the very first mosh-pit of the evening from the audience (needless to say, many more would follow this evening). Unfortunately, Death Angel had only three-quarters of an hour at their disposal to showcase their song material so this meant no songs from the albums ‘Killing Season’ and ‘Frolic Through The Park’. Especially the absence from the latter one was a bit of a bummer for me because I have some very fond memories of this particular album. My first Death Angel show (which was coincidentally also held in Utrecht) was when they toured in support for the ‘Frolic Through The Park’ album in 1988. Despite this slight disappointment, I have nothing else negative to mention about this show. 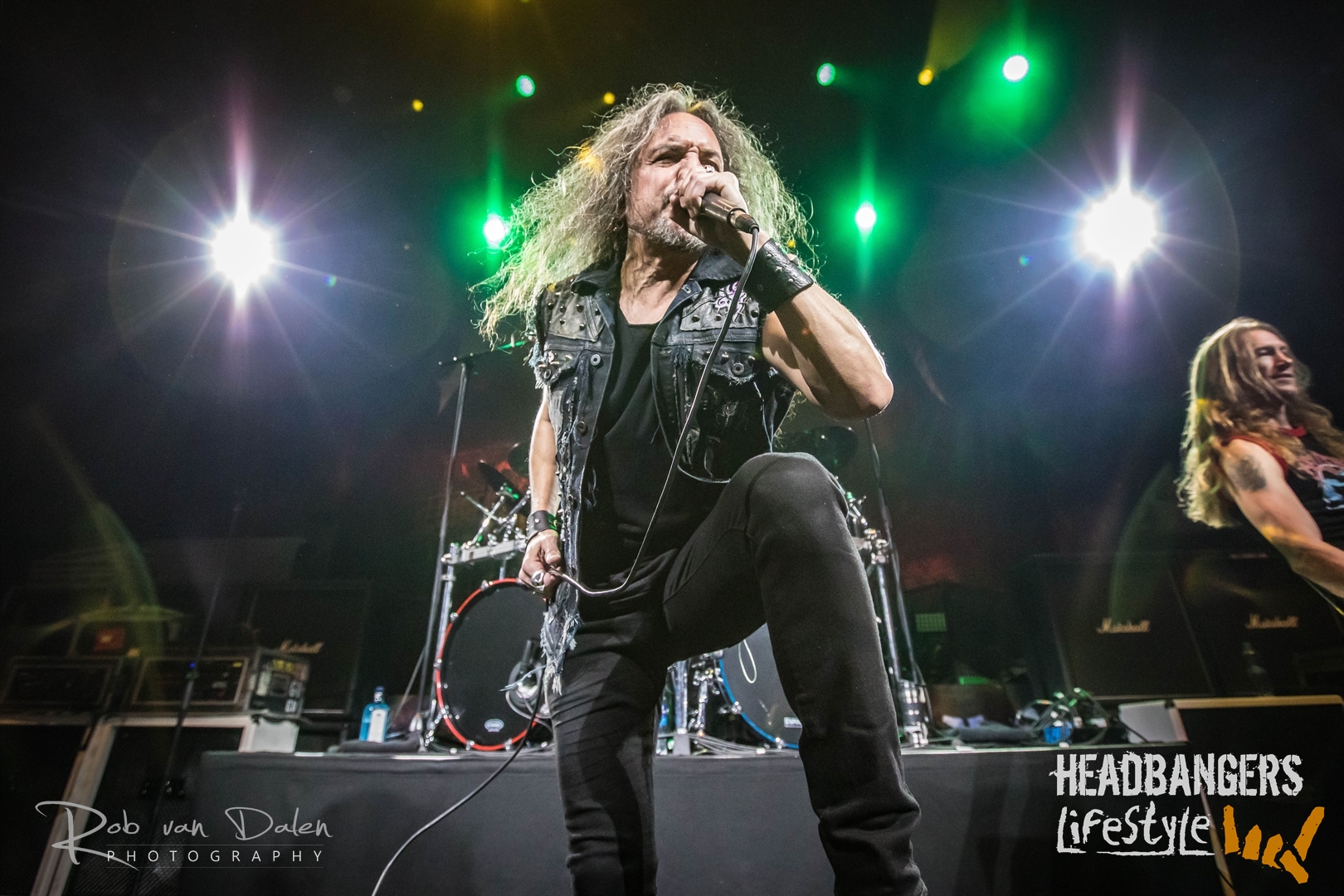 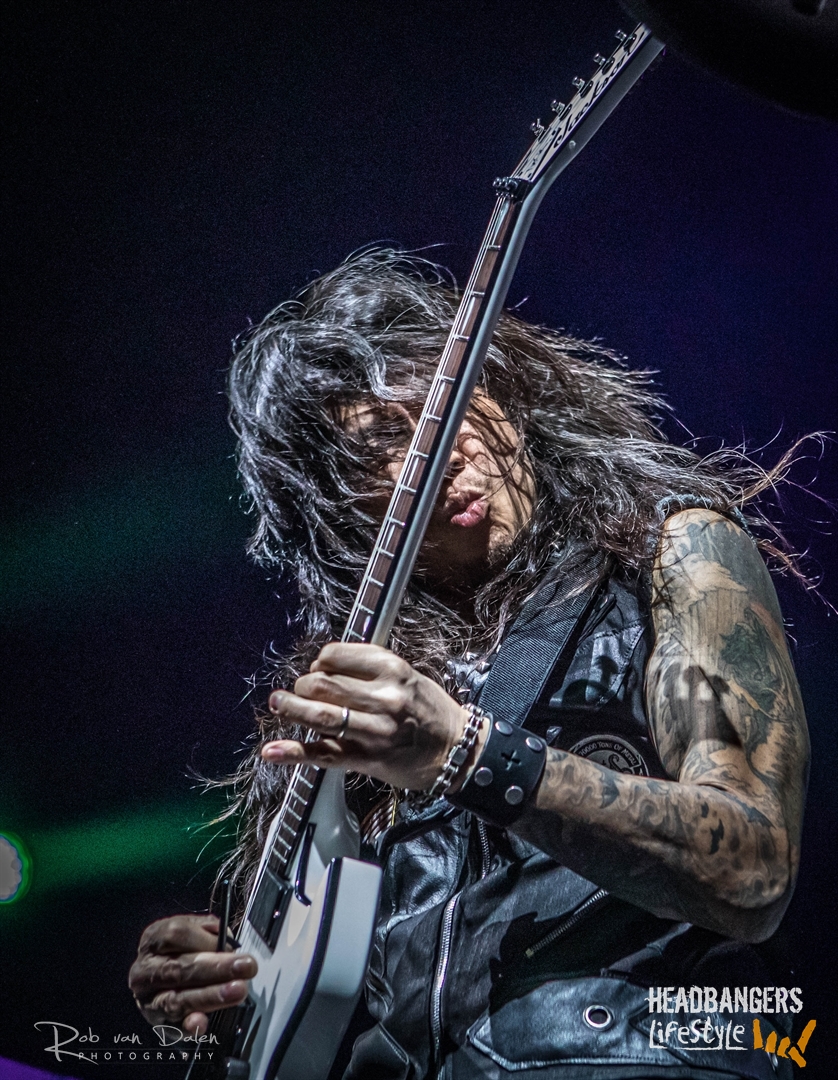 Death Angel chose their songs wisely for this tour with plenty enough variation in the setlist. From the “punky” ,,Claws In So Deep’’, the beautiful and proggy ,,Aggressor” to the “chant-along-thrasher” ,,Thrown To The Wolves’’ (which included the first minute of ,,The Ultra-Violence’’ as an intro), every song showcased how greatly Death Angel has evolved as a band throughout the years. Death Angel were blessed with a crystal clear sound, which was an added bonus to their show, especially since they were the opening band. But the absolute highlight of the show for me was the sheer enthusiasm that the band displayed during their show, especially from long-time members Rob Cavestany and singer Mark Osegueda. Both surpassed themselves with their energetic performance. Singer Mark Osegueda took it even a step further during the final chord of their show. His final words were; “We are Death Angel, We’re from the Bay Area and we play Thrash Metaaaaaaaaaaaal!!!” and while the intermission music was already cranking out Judas Priest’ ,,Rock Hard Ride Free”, Mark was still holding on his last note! What an amazing way to end a show! 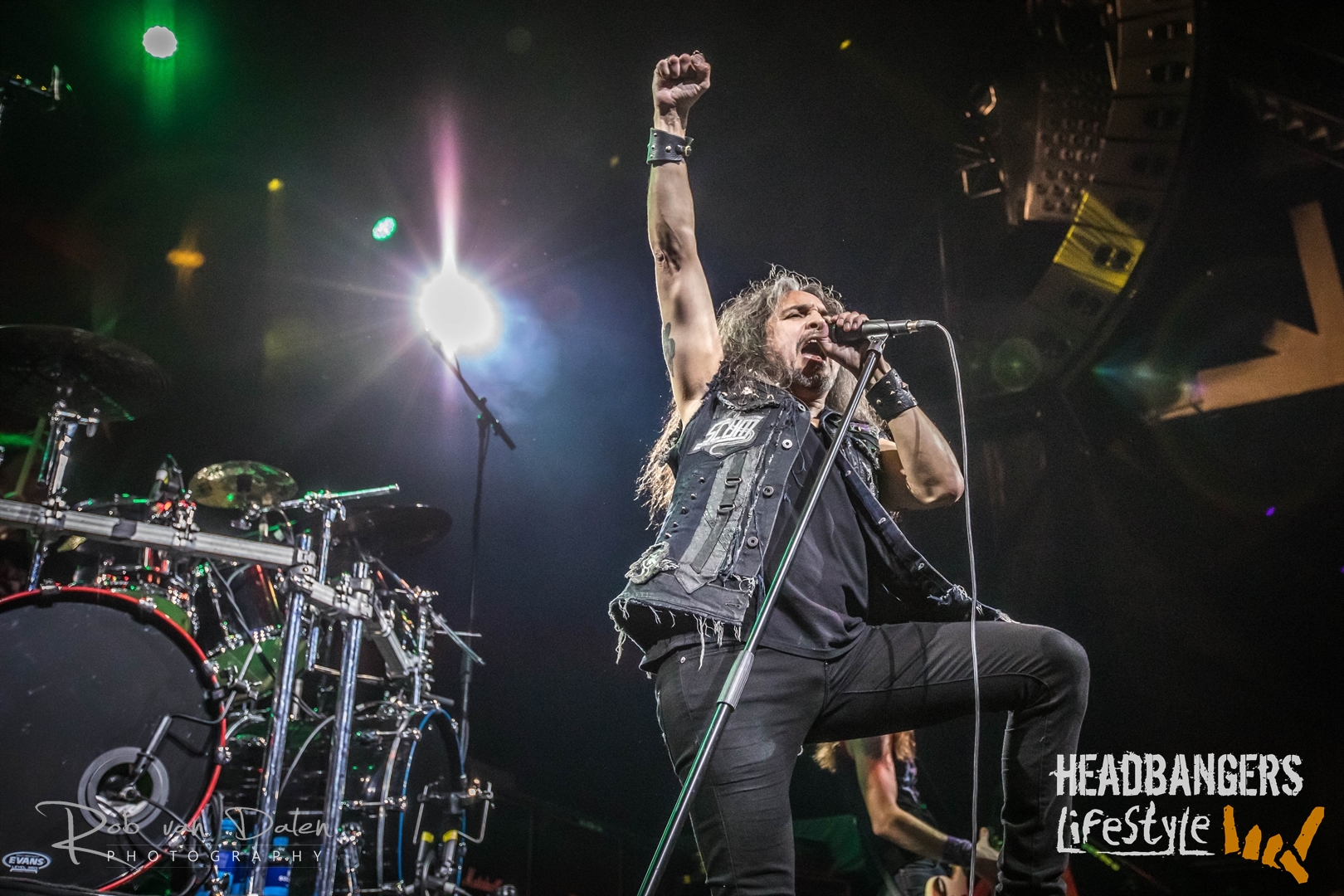 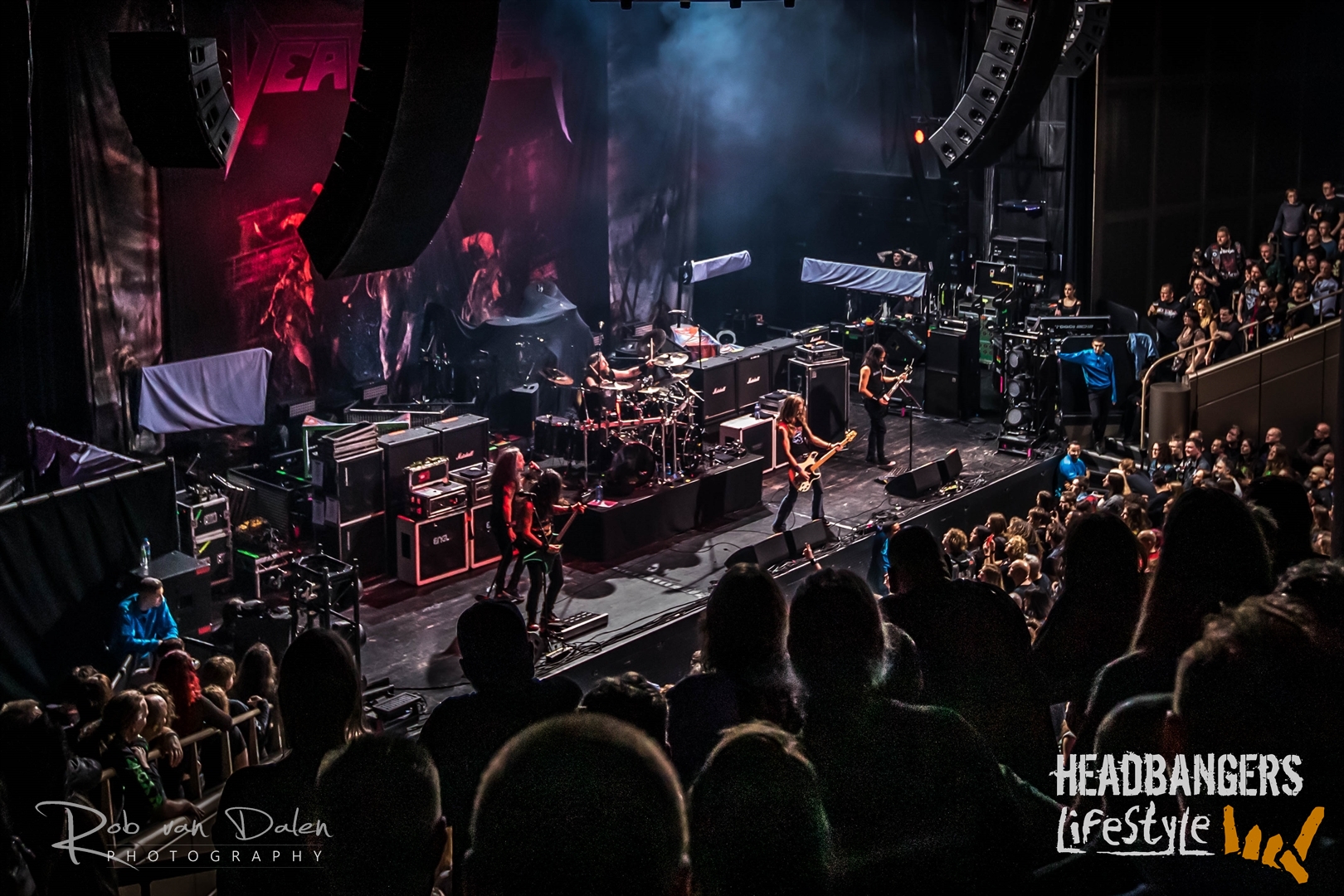 Exodus displayed their twisted sense of humour by using Wolter Kroes’ “Viva Hollandia” as an intro-tape! Hahaha! What a crazy and yet cool way to start the show! But as soon as the band entered the stage it was clear that Exodus was in for the kill! The double sucker-punch of ,,Body Harvest” and ,,Blood in, Blood Out” set the audience immediately into an uncontrolled, slam-dancing frenzy. The Thrash-classic ,,Deliver Us to Evil” took the audience even further into their collective pogo-state of mind. 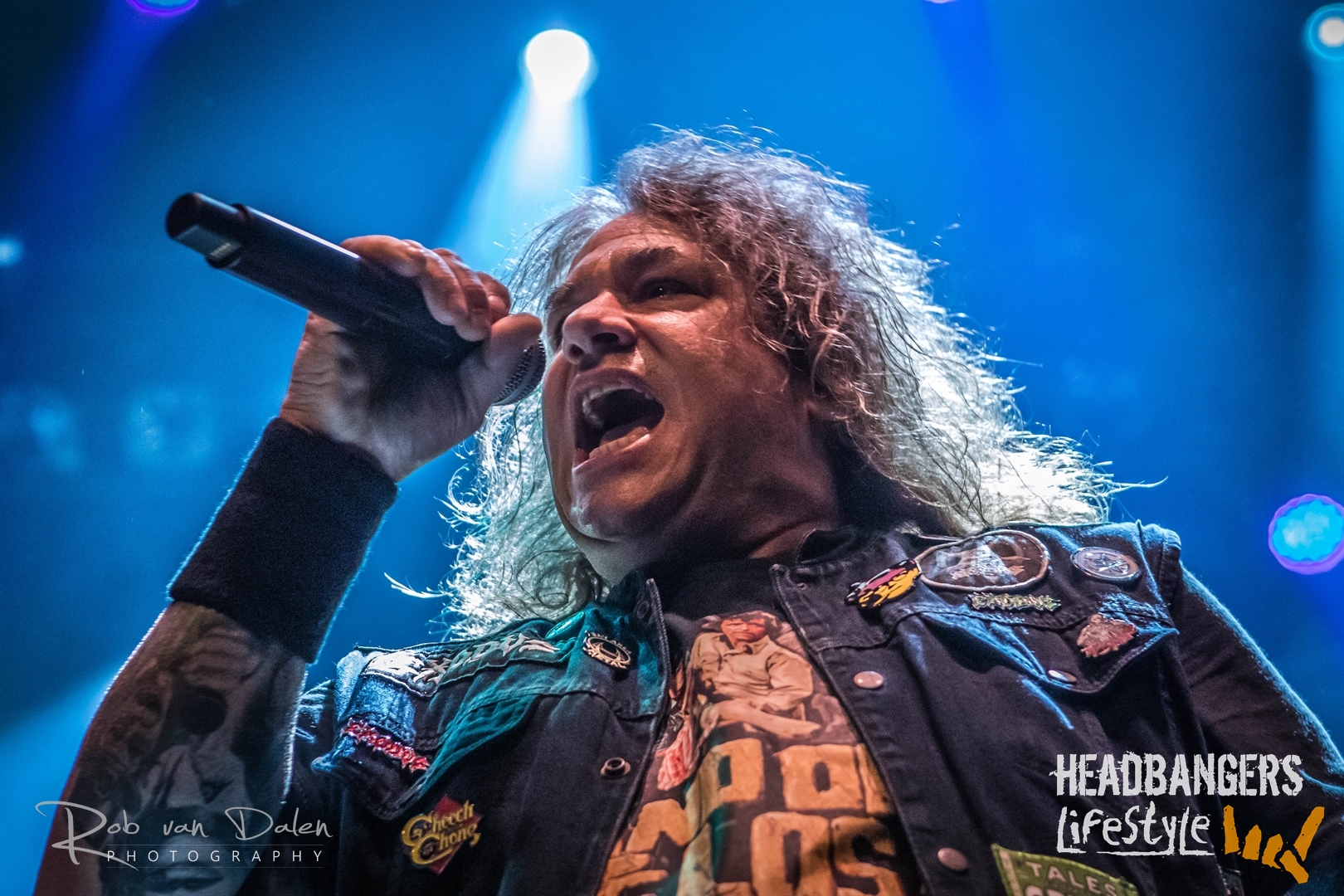 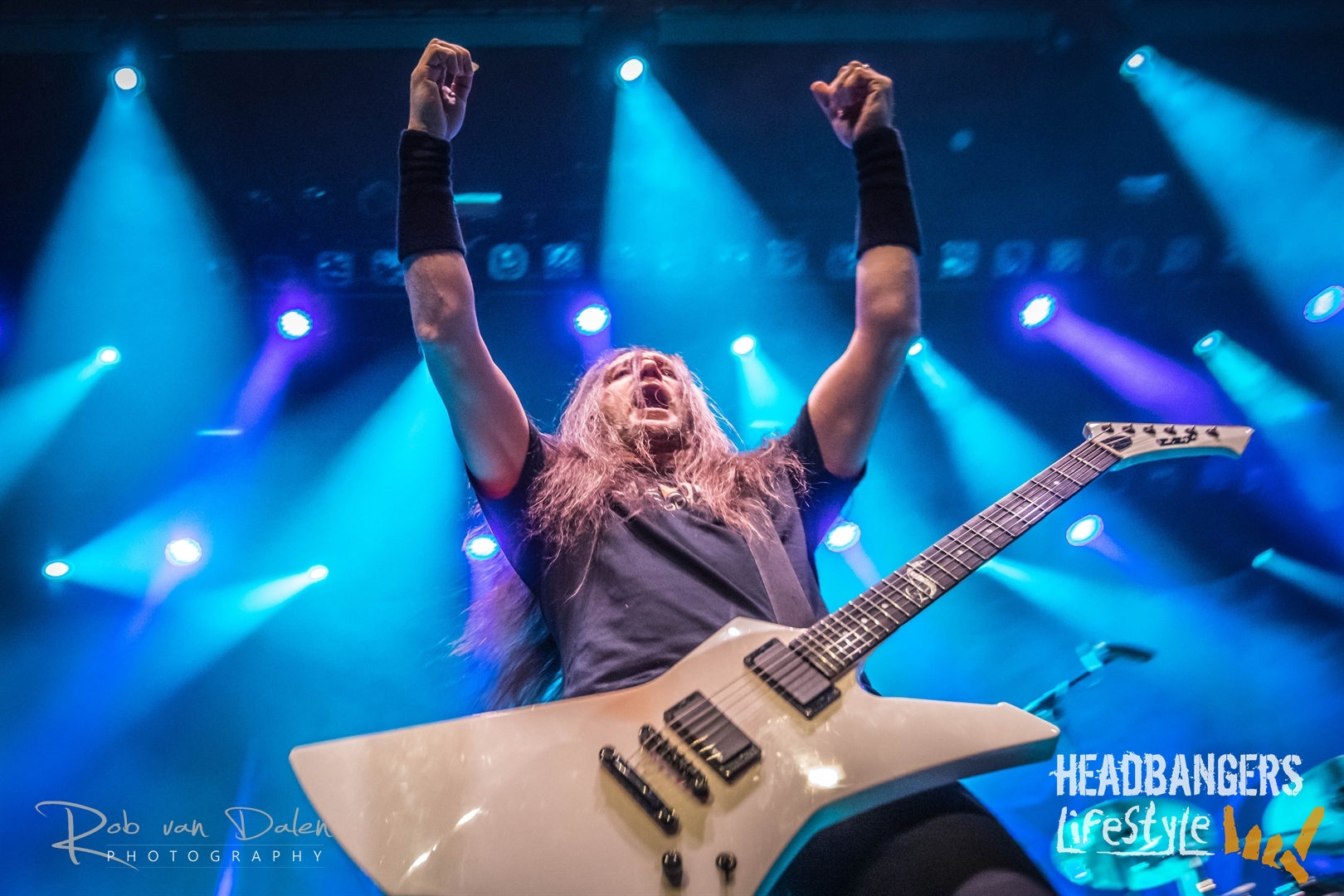 Unfortunately, Steve “Zetro” Souza’s vocals were deep buried into the (rather) muddy mix but every thrasher knows the words to this song by heart so there was no real loss here. Exodus kept on exhausting their audience with crushing renditions of ,,Deathamphetamine” and ,,Blacklist” as well as fan-favourites such as ,,Fabulous Disaster”. The only moment to catch a breath was between the songs when ,,Zetro” reminisced about the 1988 edition of Dynamo Open Air and the special bond that Exodus has built with their Dutch fans ever since. 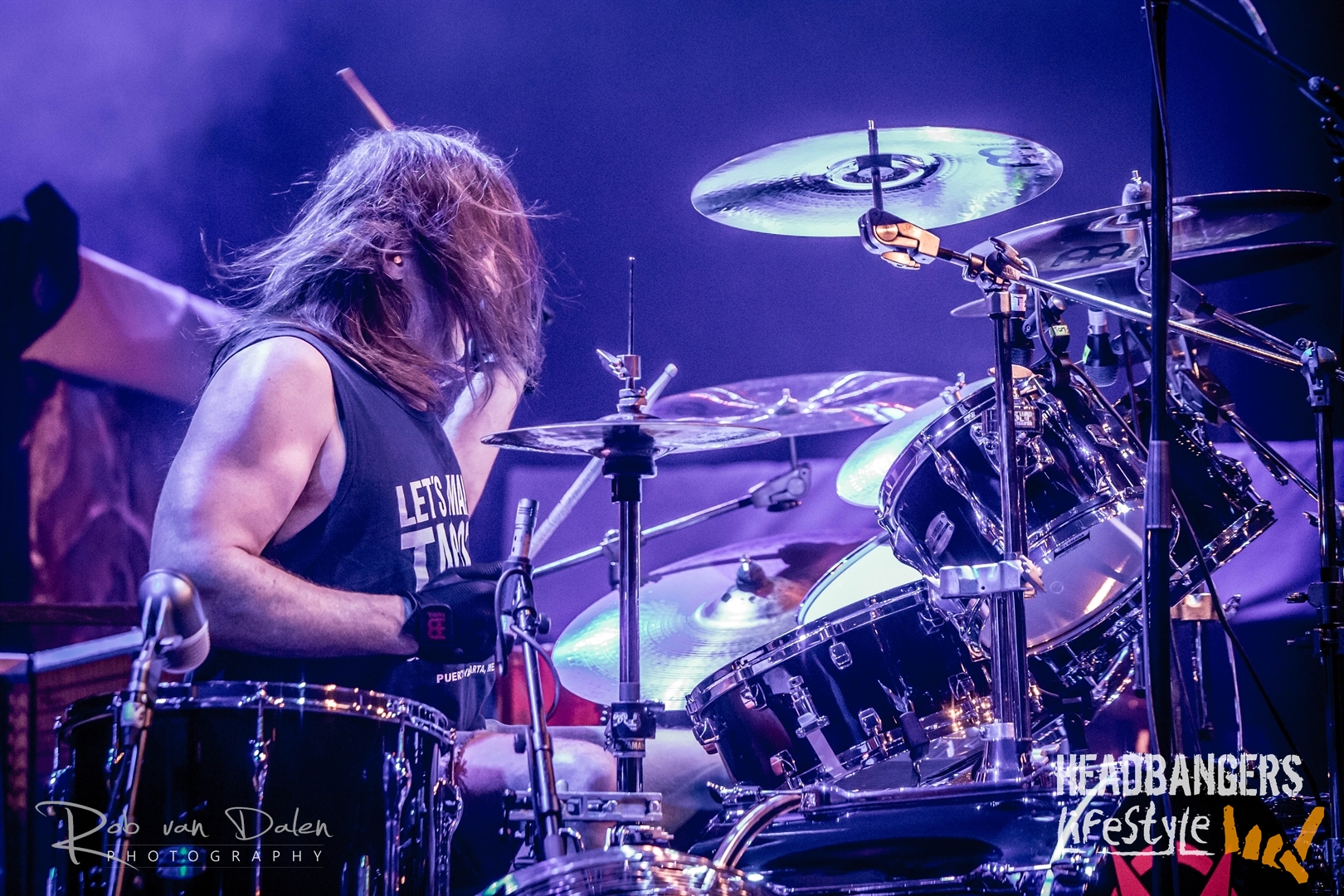 Exodus’ one-hour onslaught ended with an effective triple assault in the form of ,,Bonded By Blood”, ,,The Toxic Waltz” and ,,Strike Of The Beast” (including a healthy and cozy Wall of Death). No real deep cuts or surprises here but in the end everyone got what they came for and that was a dose of some good old-fashioned “Good Friendly Violent Fun”. Leave that to the Exodus’ guys! 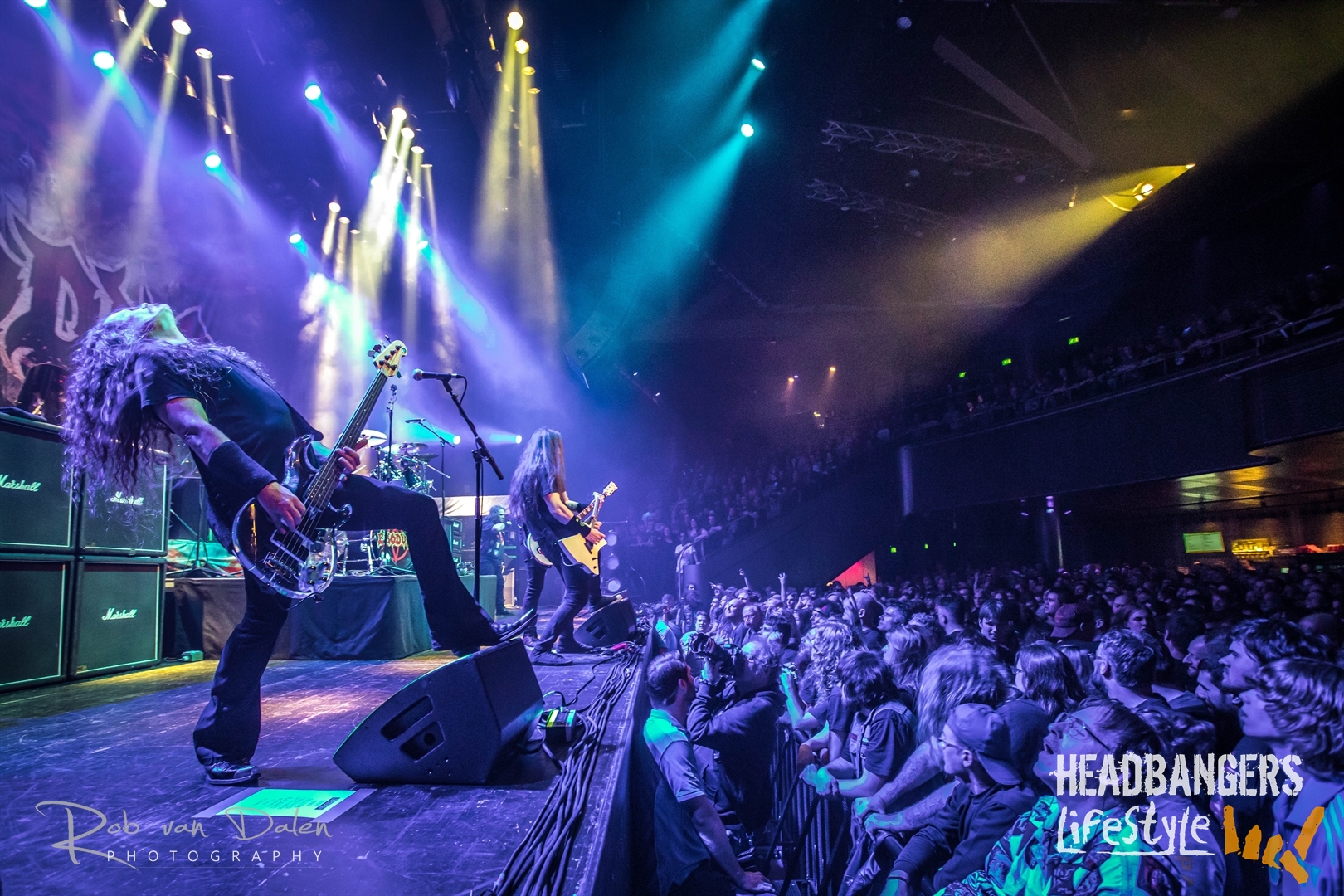 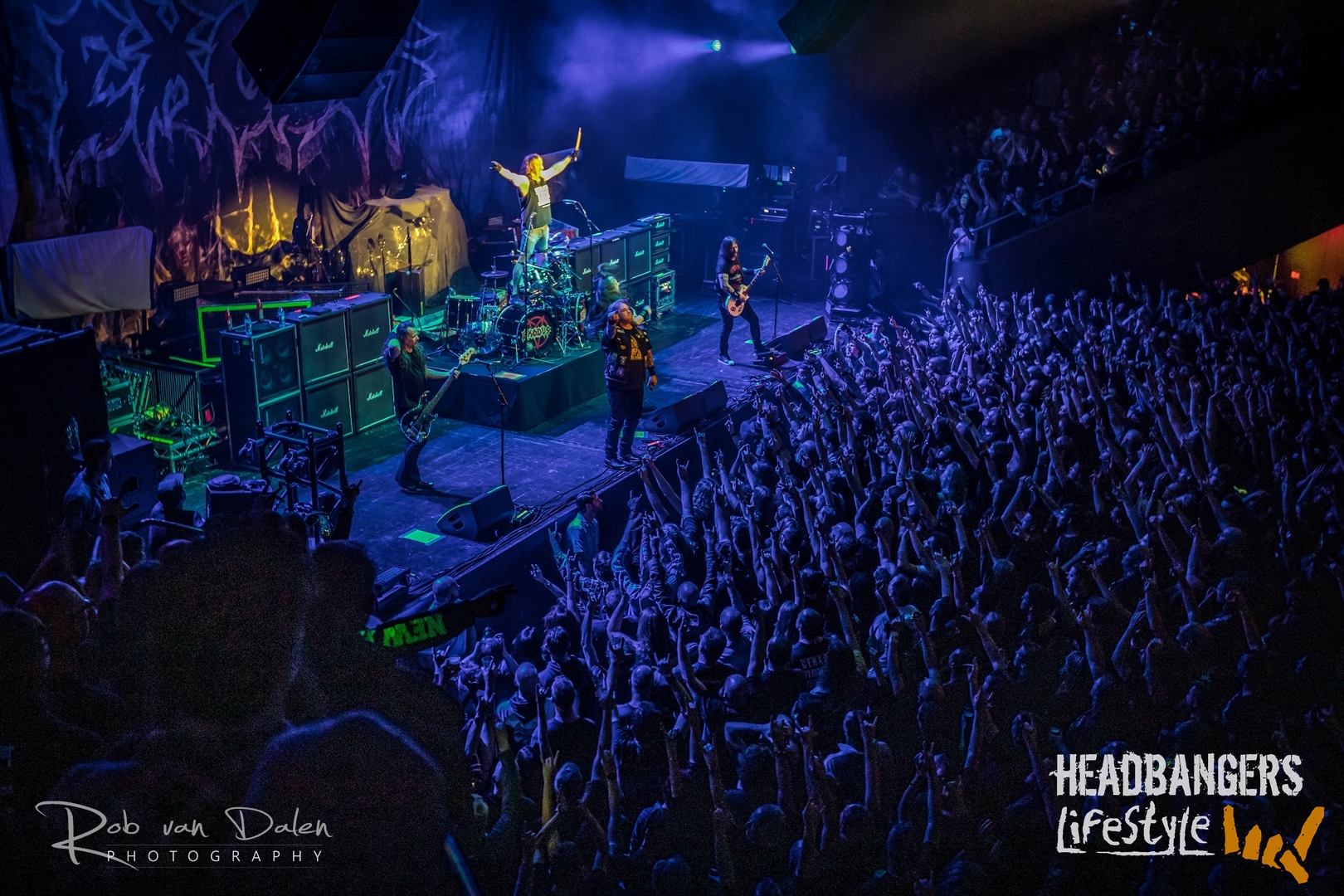 One might think that the audience was more or less satiated after the crushing shows of Death Angel and Exodus but nothing could be farther away from the truth than this assumption. Just as soon as Testament took the stage and unleashed ,,Eerie Inhabitants” and ,,The New Order” onto the audience it was carnage all over again. Not entirely surprising since both songs are regarded as genuine Thrash Metal classics and are engraved into the memory of every self-respecting Thrash Metal fan. So it goes without saying that the audience was revved up again and ready to immerse themselves again into another violent orgy of moshing mayhem. The fact that Chuck Billy kept throwing band-shirts into the audience during the beginning of the show added an extra level of fun to the madness. 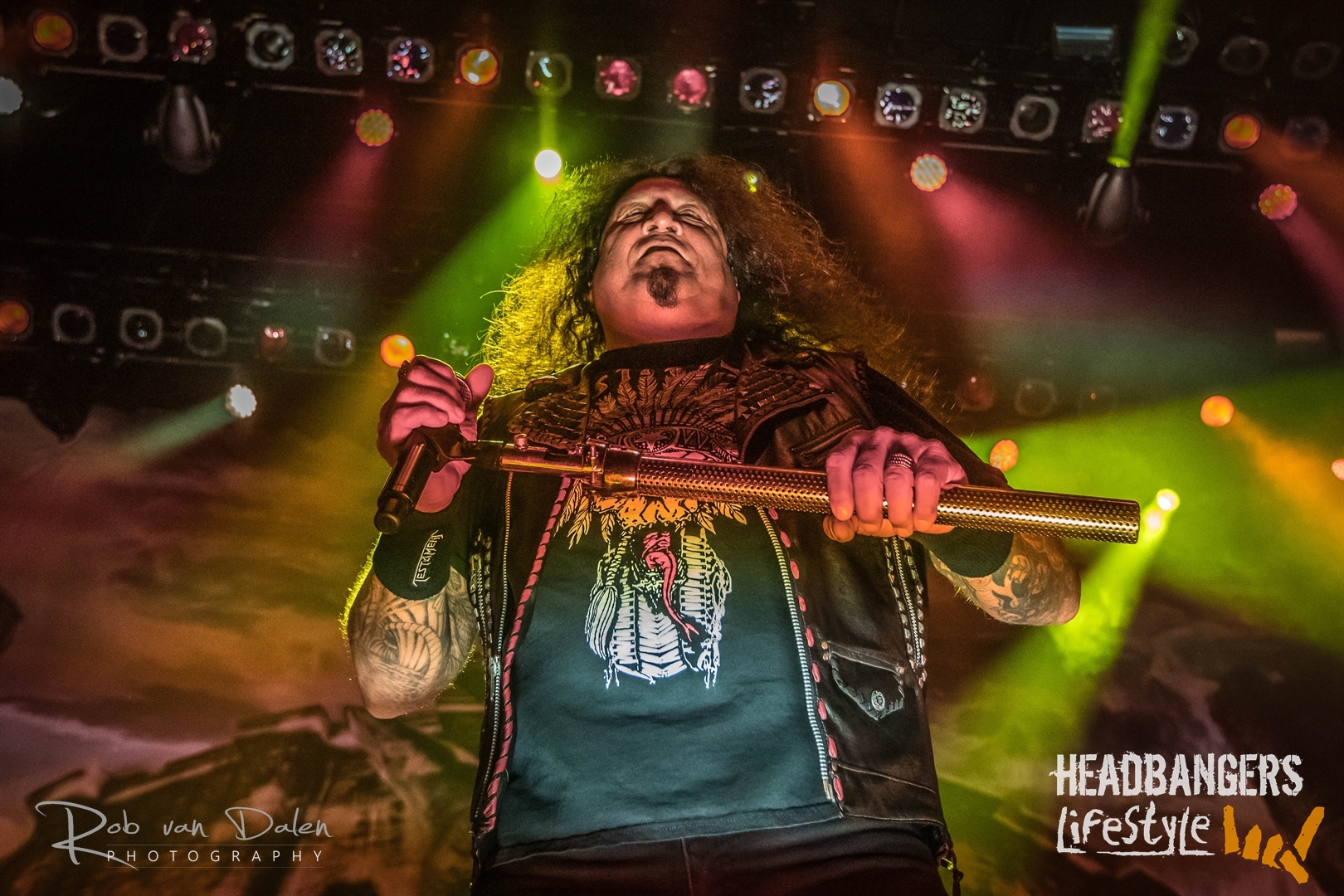 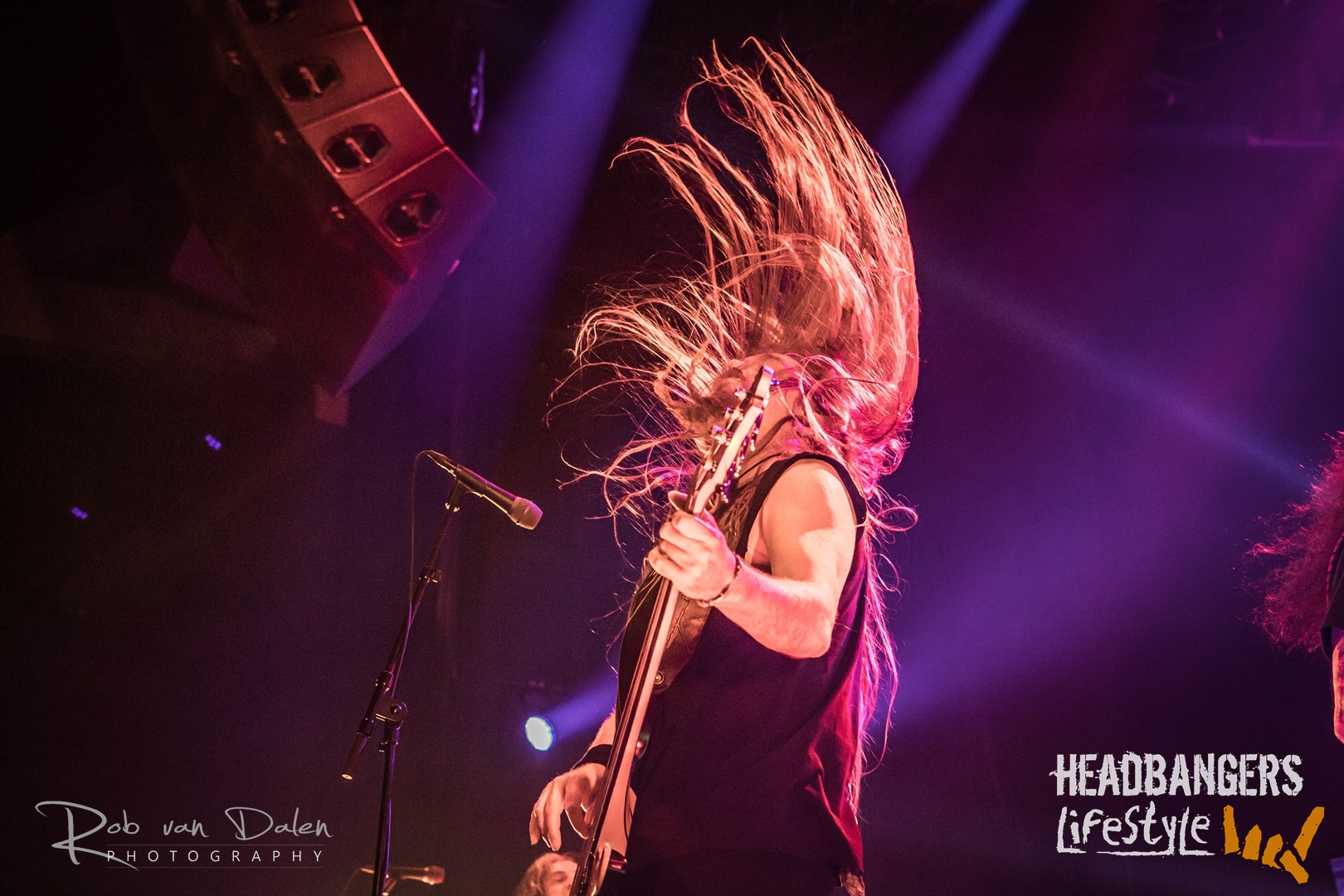 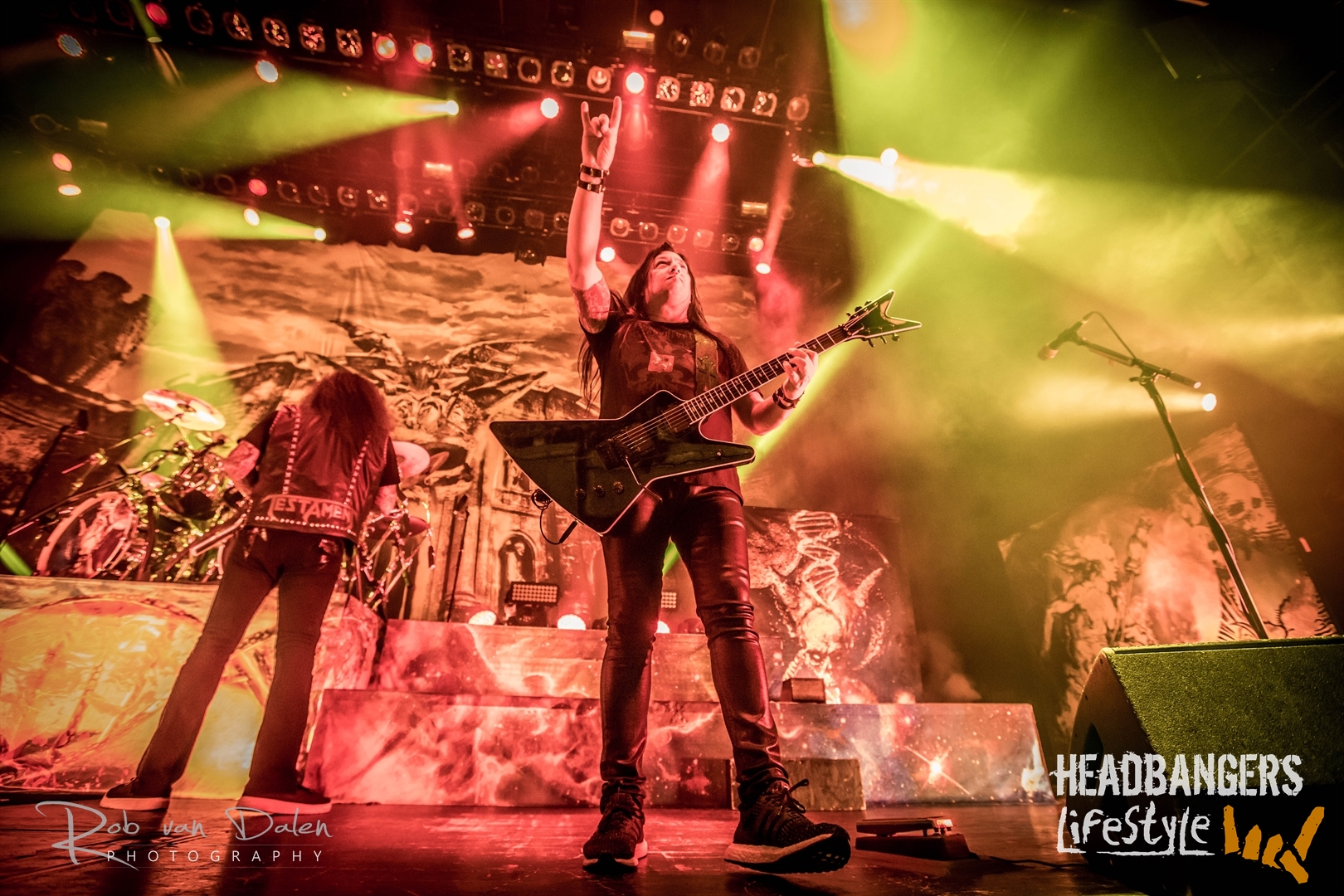 ,,The Haunting” from their debut album `The Legacy’ brought most of us old-timers back to the day when we saw Testament for the first time on that wet and dreary day at Dynamo Open Air in 1987. Judging from the stormy weather that raged outside the concert hall during this show, one might almost think that bad weather is following Testament every time they visit our country… anyhow; “Fuck The Rain!” The middle part of Testament’ show relied heavily on songs from their more recent albums such as ‘The Gathering’ (,,Fall of Sipledome”), ‘Brotherhood Of The Snake’ (the title track and ,,The Pale King”) and ‘Dark Roots Of The Earth’ (three songs in succession; ,,Dark Roots Of Earth”, ,,Last Stand For Independence” and ,,Throne Of Thorns”). 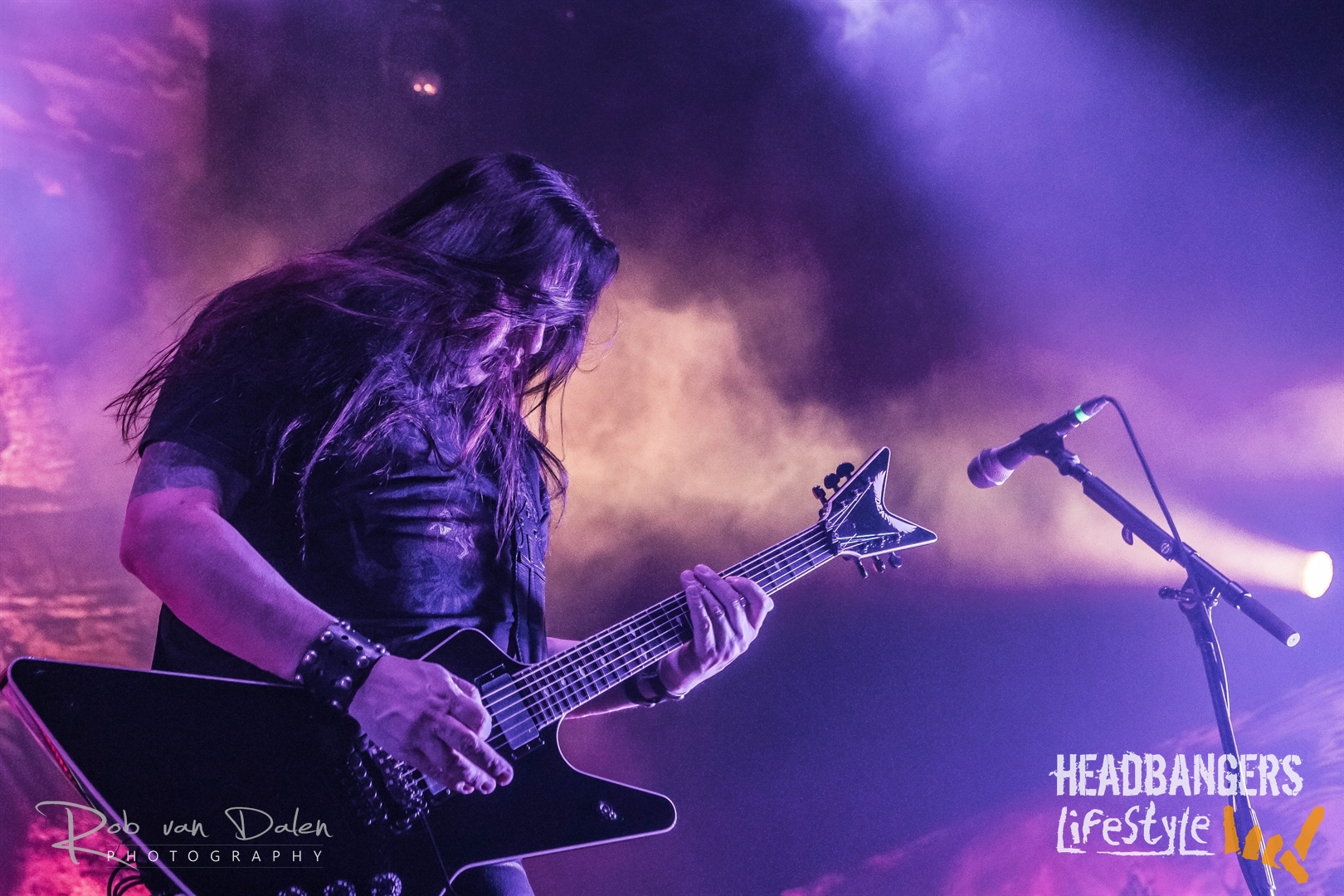 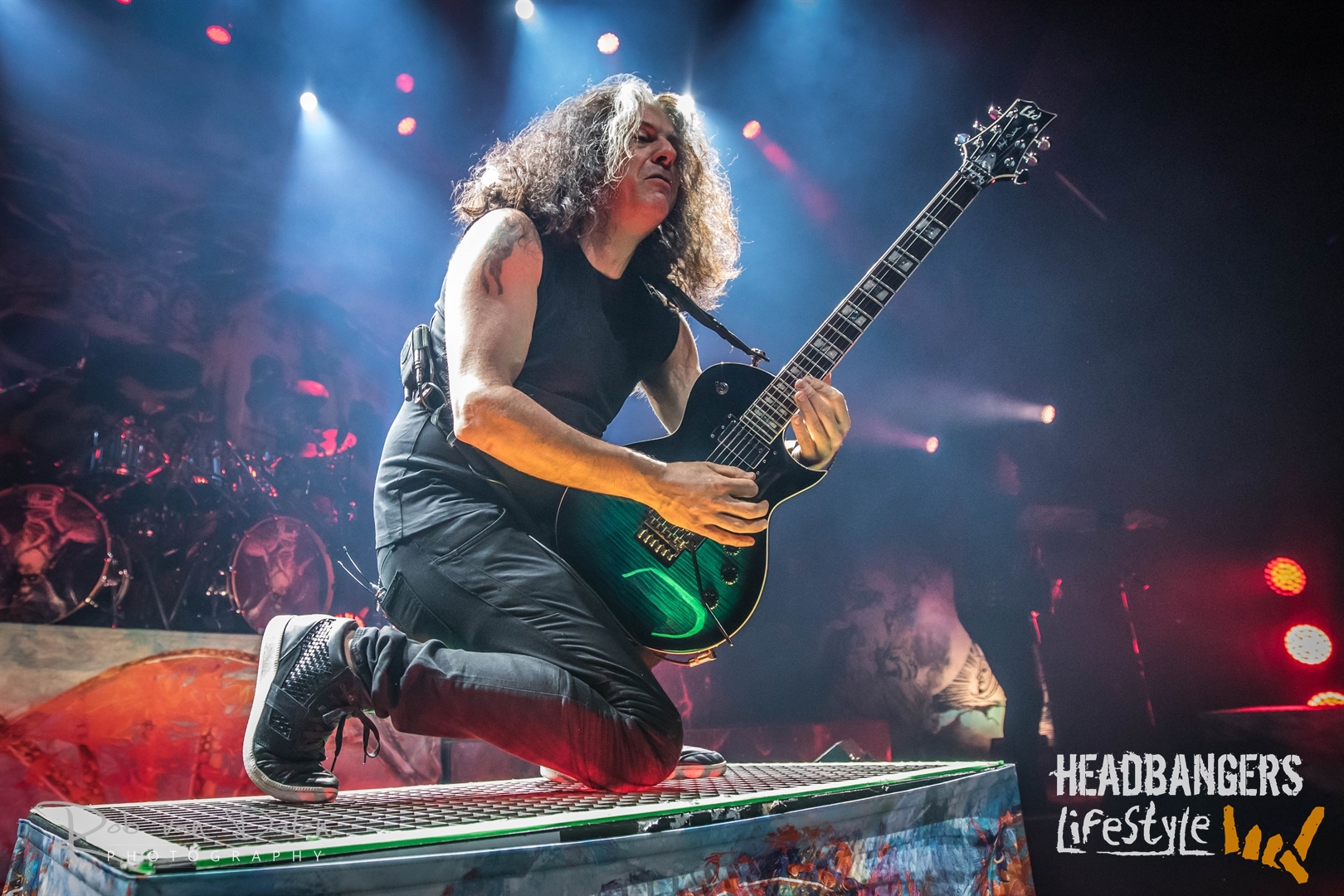 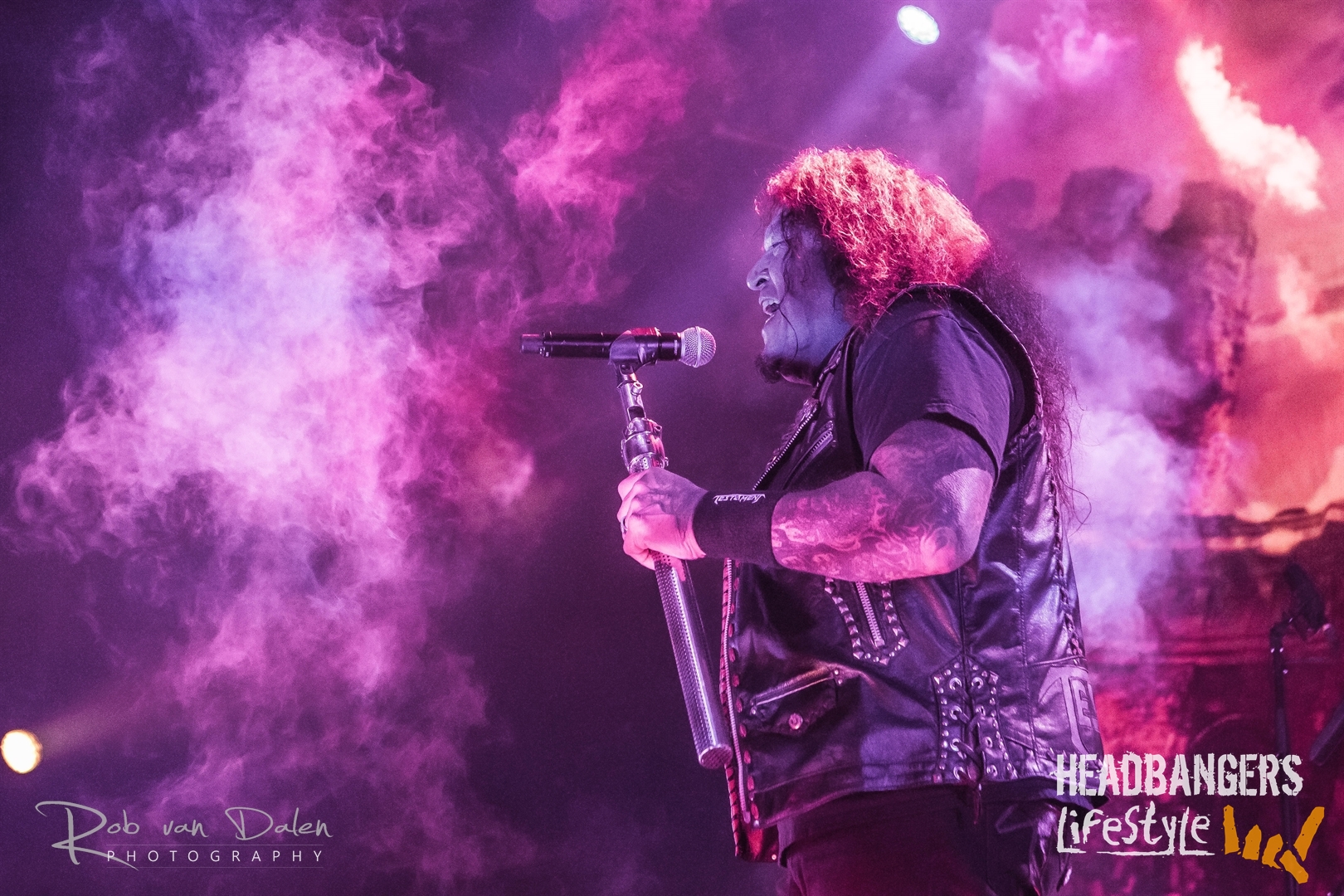 The stellar production of Testament’s show is also worth mentioning; not only was the light show accurate, atmospheric and intense so was the decoration of the stage. Four different backdrops were used during the show to put the focus on a certain period or album in Testament’s career. The last backdrop for the evening was reserved for the artwork for Testament’s forthcoming album; `Titans Of Creation’ and judging from the new song that they played, entitled; ,,Night Of The Witch”, it will be an album to look forward to. It was overly obvious that both the band and the audience had the times of their lives. Besides the obligatory encores such as ,,Into The Pit”, ,,Practice What You Preach”, ,,Over The Wall” and ,,Disciples Of The Watch” we were also treated on the classic ,,Alone In The Dark”, which hasn’t been played yet during this tour. A nice gesture to the audience who managed to sell out this show weeks before the actual date. 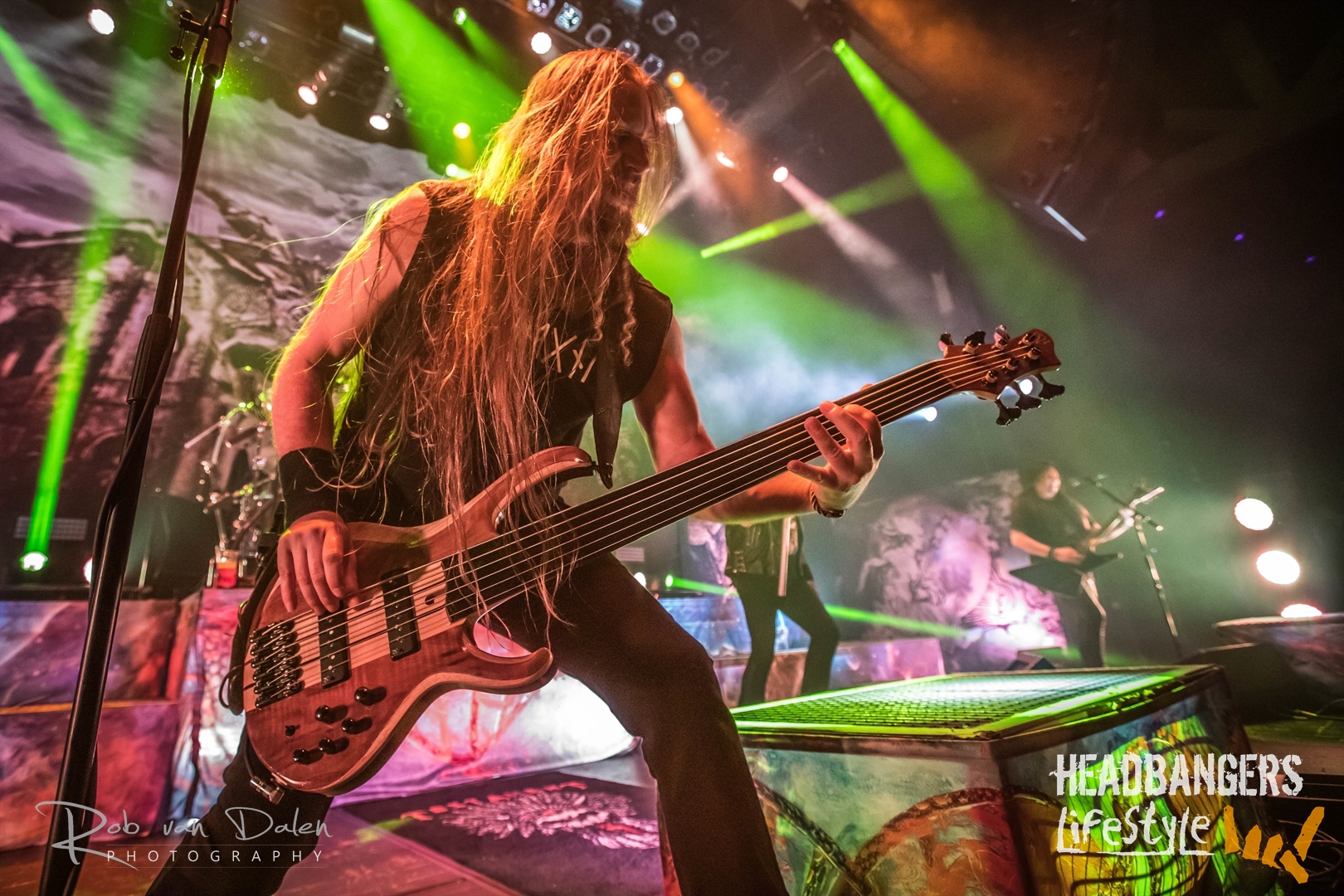 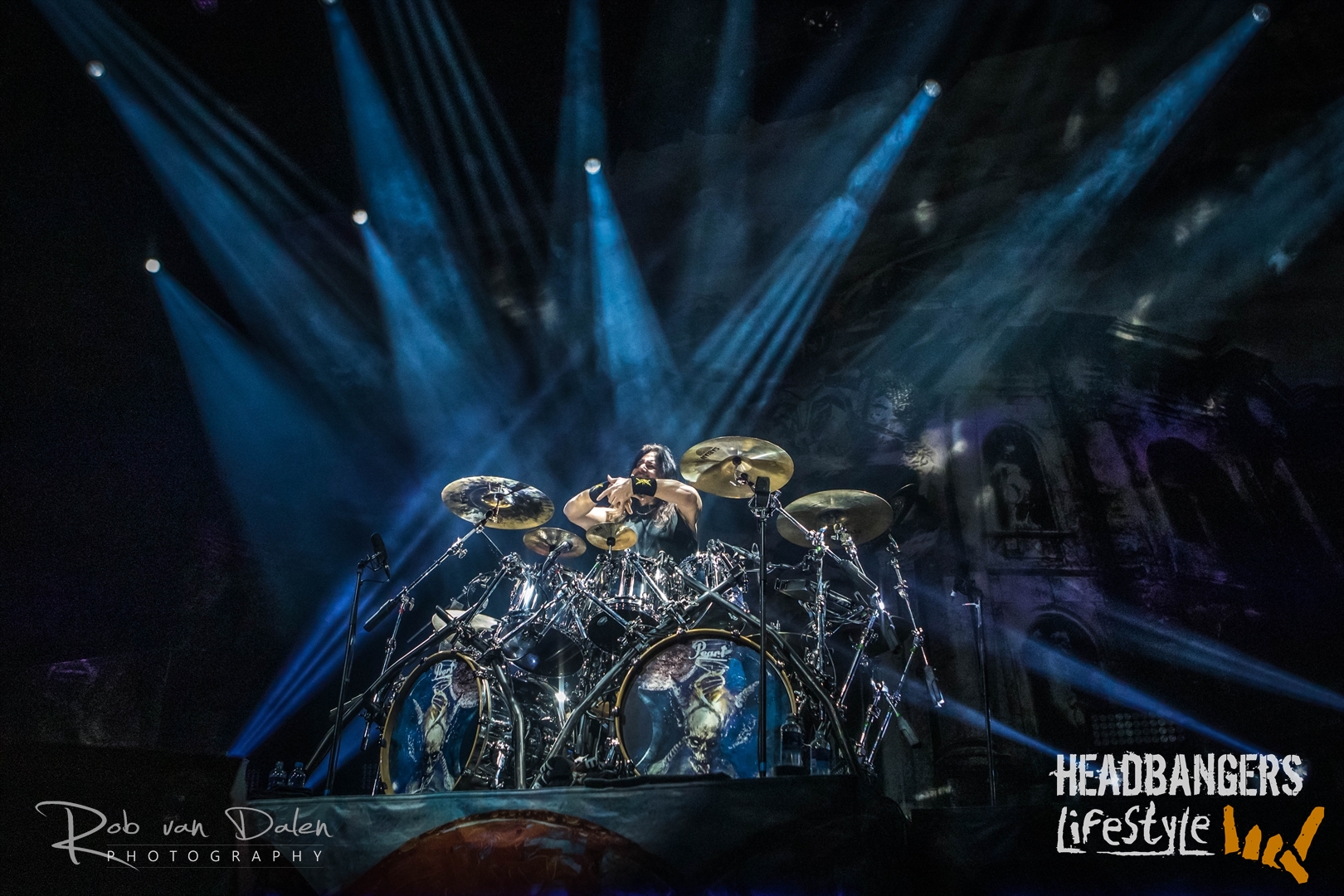 It’s hard to choose which band was the best on this impetuous evening. All bands excelled themselves with their performance. All bands celebrated their history, the Thrash Scene and their loyal following and it is heartwarming to ascertain that all three bands are still relevant to this very day!
—