THE MISSION & The Awakening 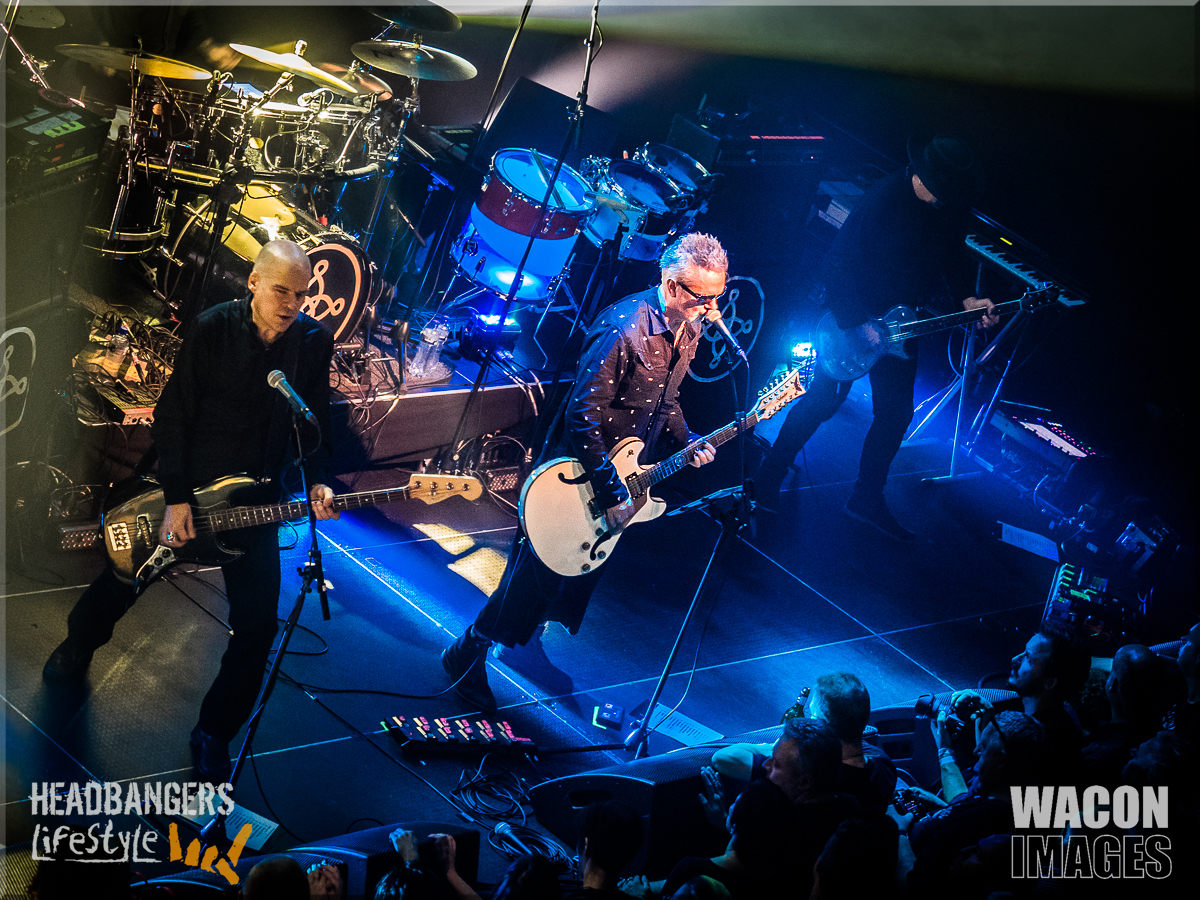 THE MISSION & The Awakening

On this Halloween evening The Mission faces a sold out venue. Which means about 600 `night creatures’ are gathered for a trip down memory lane in the cozy Pandora room, (which is not quite in the basement but actually at the very top, level 6), of the TivoliVredenburg concert hall in Utrecht (NL). And while Russian feminist punk rock group Pussy Riot is having a serious conversation with Prof. dr. Rosi Braidotti this evening, in this very same building, we got our own taste of medicine, male feminism, dark romantic, poetic love debates, rebellious attitude and theatrical innuendos. 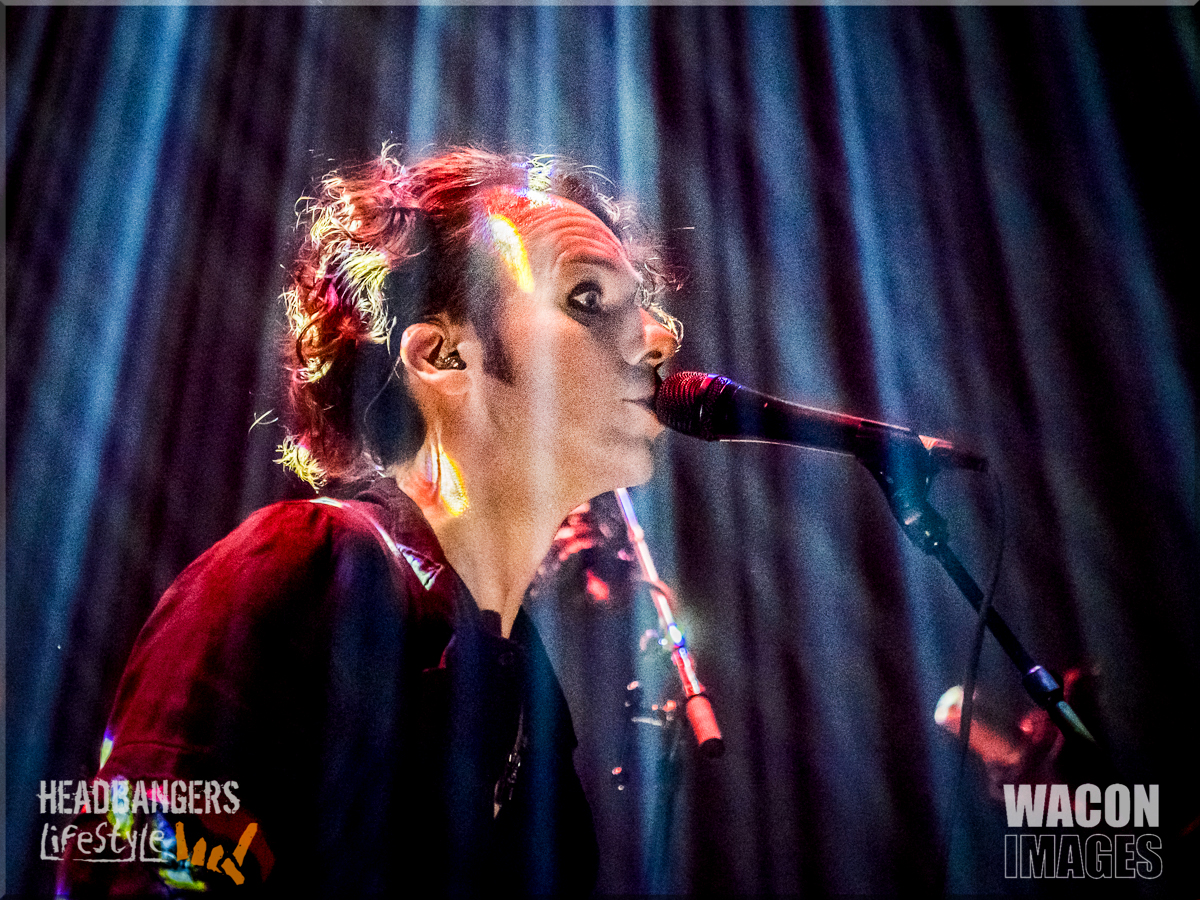 This gloomy, dark romantic evening starts with support band The Awaking, originally from South Africa but now based in America. With a playtime of 45 minutes, singer, guitarist Ashton Nyte and his companions are living their childhood dream by opening for their idols. The Awakening proves to be a perfect, professional, experienced and tight sounding opener for the British gothic rock veterans. We get to hear a very pleasant hybrid of new wave, gothic and industrial rock music, which contains infectious beats, blistering guitar tones and loads of mystic in the low vocals of Mr. Nyte. The band shows confidence along with a sympathetic attitude and they even made it easy to love their dark performance of the Simon & Garfunkel hit ,,The Sound Of Silence’’. 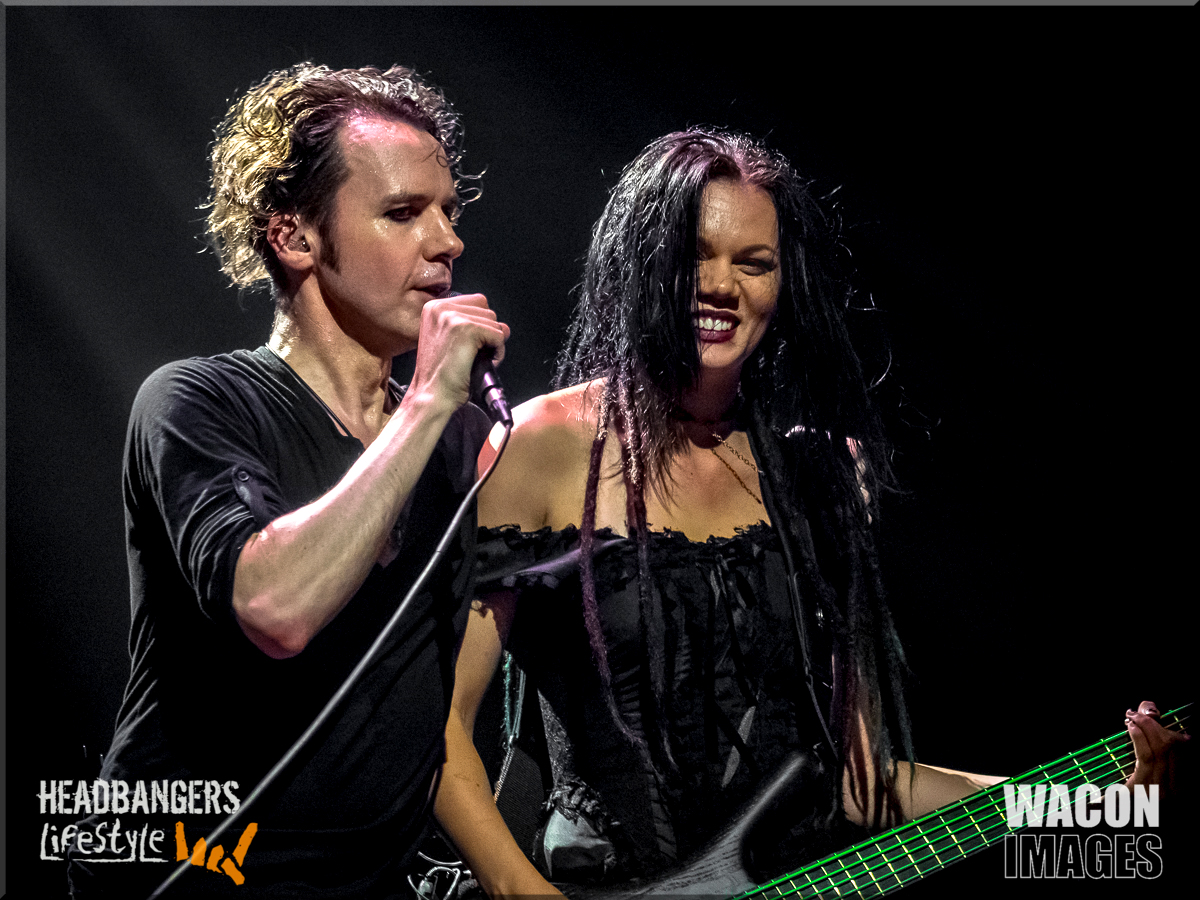 After the change over the audience is ready to celebrate the 30th anniversary of The Mission, the intention of this tour. Although The Mission just released their brand new, great sounding studio album `Another Fall From Grace’, it is obvious the fans are here to enjoy the old days to the fullest even more. Welcomed with loud applause singer, guitarist Wayne Hussey, guitarist Simon Hinkler, bass player Craig Adams, drummer Mike Kelly and a female guest singer, enter the stage and obviously agreed on dress code black. 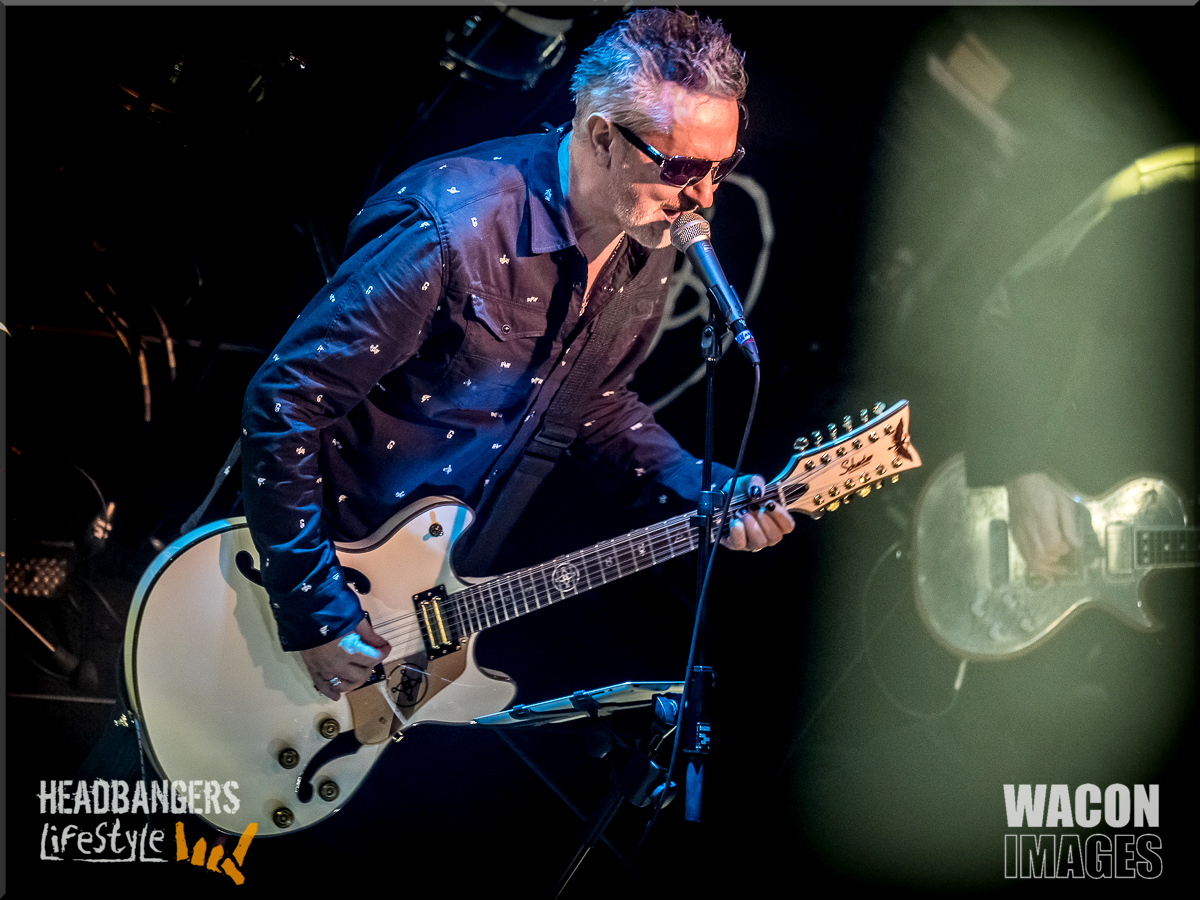 Wayne observes the audience from behind his sunglasses and Simon hides even more in the shadows by wearing sunglasses and a big hat. A huge backdrop that features the album cover of ‘Another Fall From Grace’ reminds us of the new release but will be replaced by a backdrop with the traditional symbol of The Mission halfway the concert. By starting of with fabulous classic track ,,Beyond The Pale’’ the audience is right were the band wants them to be and the vibe of solidarity and the mood for a successful evening starts to rise quickly. Fueled by drummer Mike Kelly the band kicks in with a lot of energy and gets us more fired up during the next two songs ,,Hands Across The Ocean’’ and Neil Young cover ,,Like A Hurricane’’. 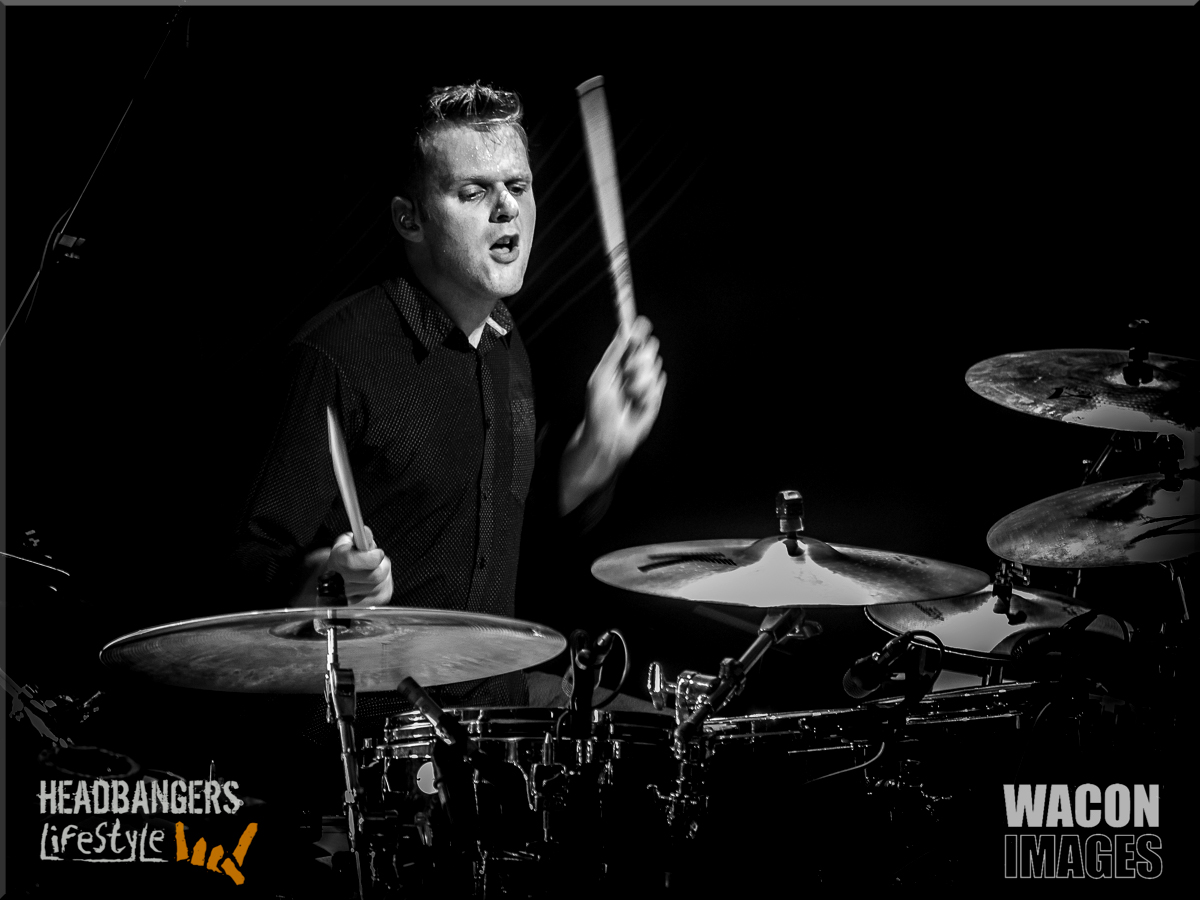 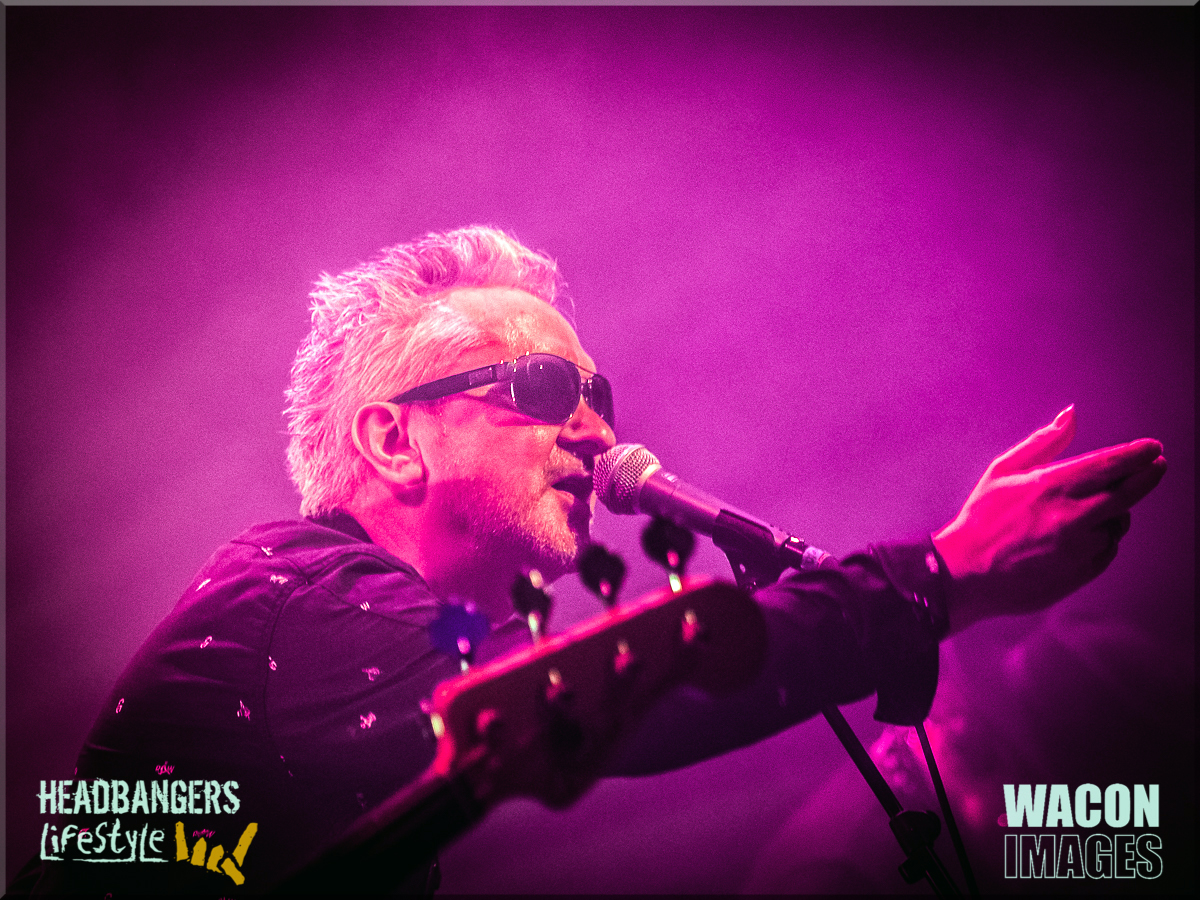 ,,Tyranny Of Secrets’’, ,,Met-Amor-Phosis’’ and ,,Blood On The Road’’ are the only representatives of the new album this evening, which means the rest of the two hour set contains a lot of familiar highlights, such as ,,Garden Of Delight’’, the famous pop song ,,Like A Child Again’’, ,,Tower Of Strength’’, ,,The Crystal Ocean’’ and ,,Wasteland’’. It is fantastic to see how strongly the fans get carried away with the music and how they are showing their devotion by dancing, waving their hands, get themselves lifted up by their friends, waving with banners and singing along. 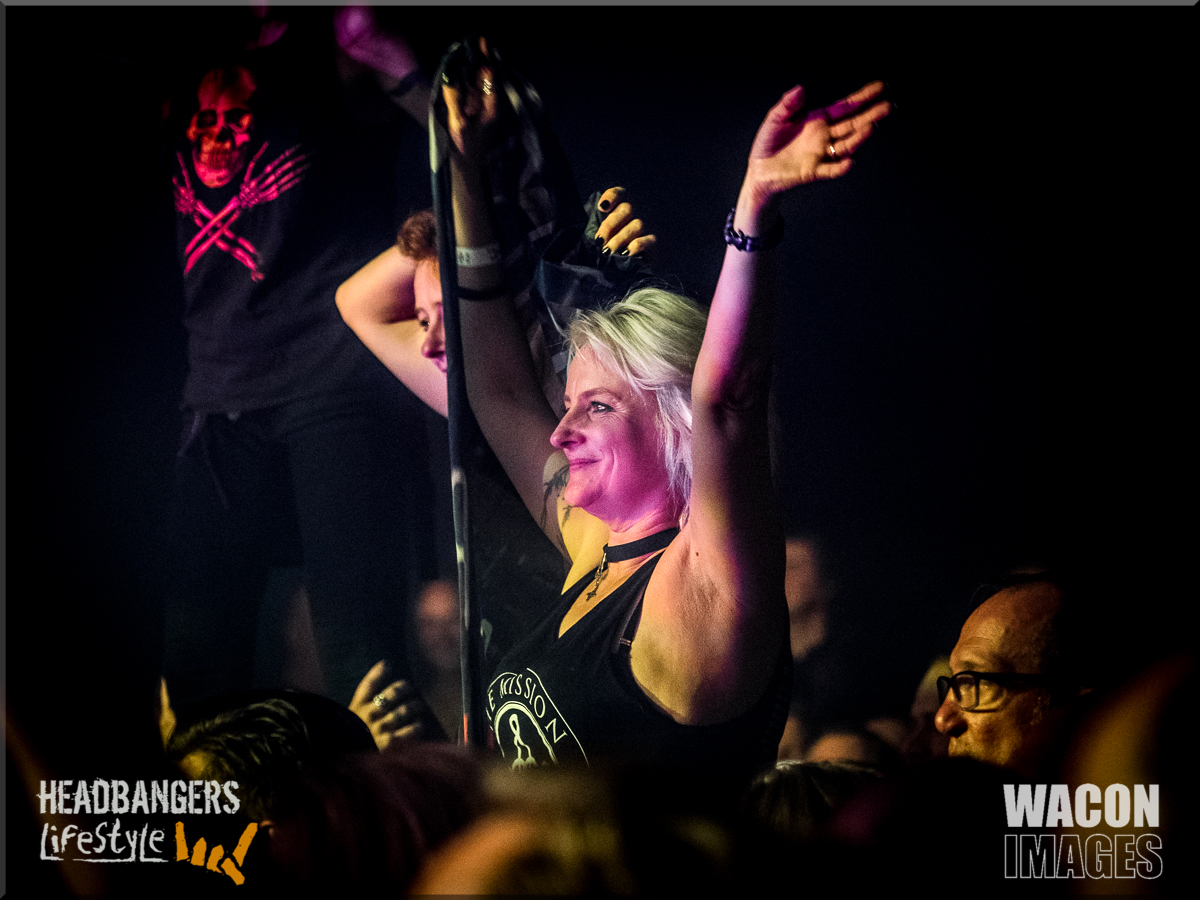 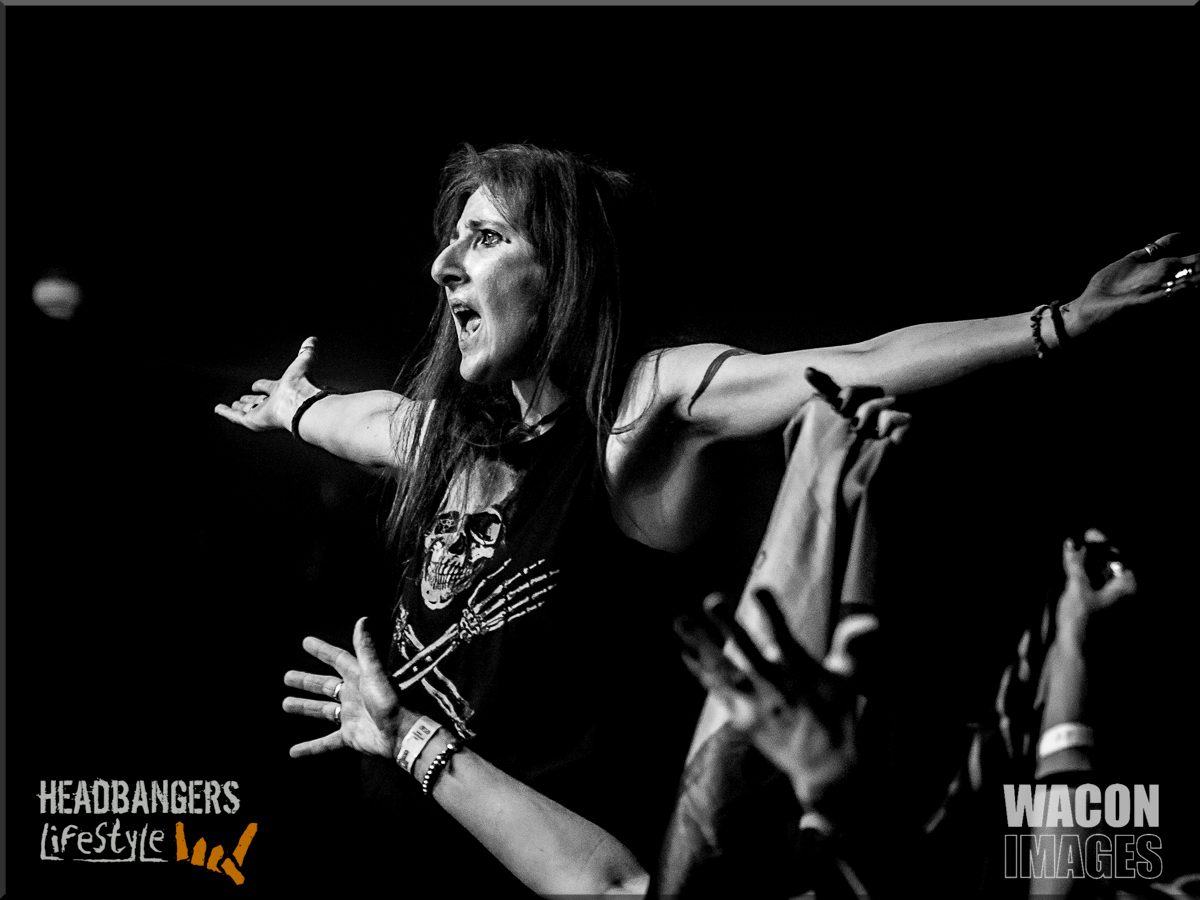 In between songs Wayne presents himself as a character with subtitle, dry British humor and showing appreciation in his own way. Although the era of being the young mysterious rock gods are clearly over, Wayne still has the moves, the vocal persuasion and sexiness in his characteristic voice, and lets not forget he is a remarkable guitar player too. The beautiful guitar melodies of Simon and playful deep bass tunes of Craig are very powerful and still take you to high places. 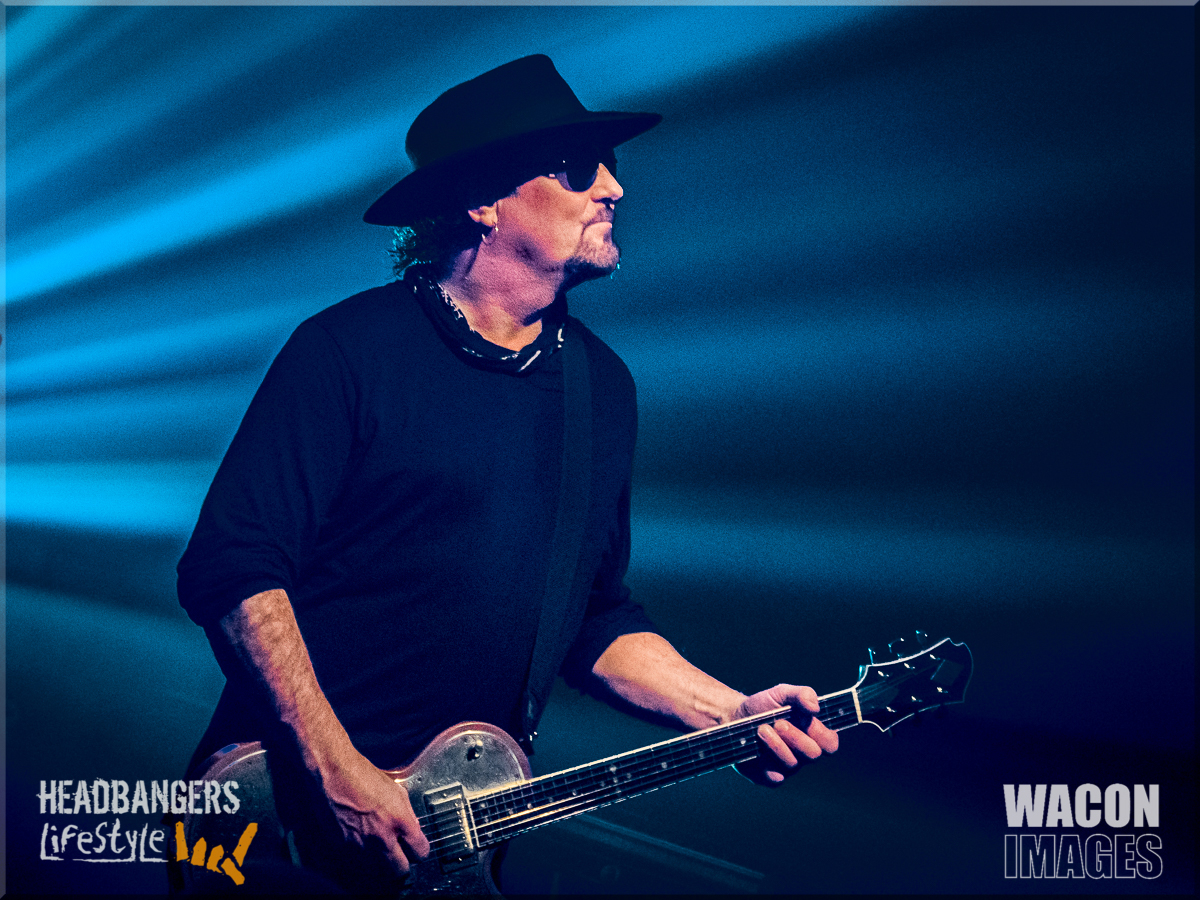 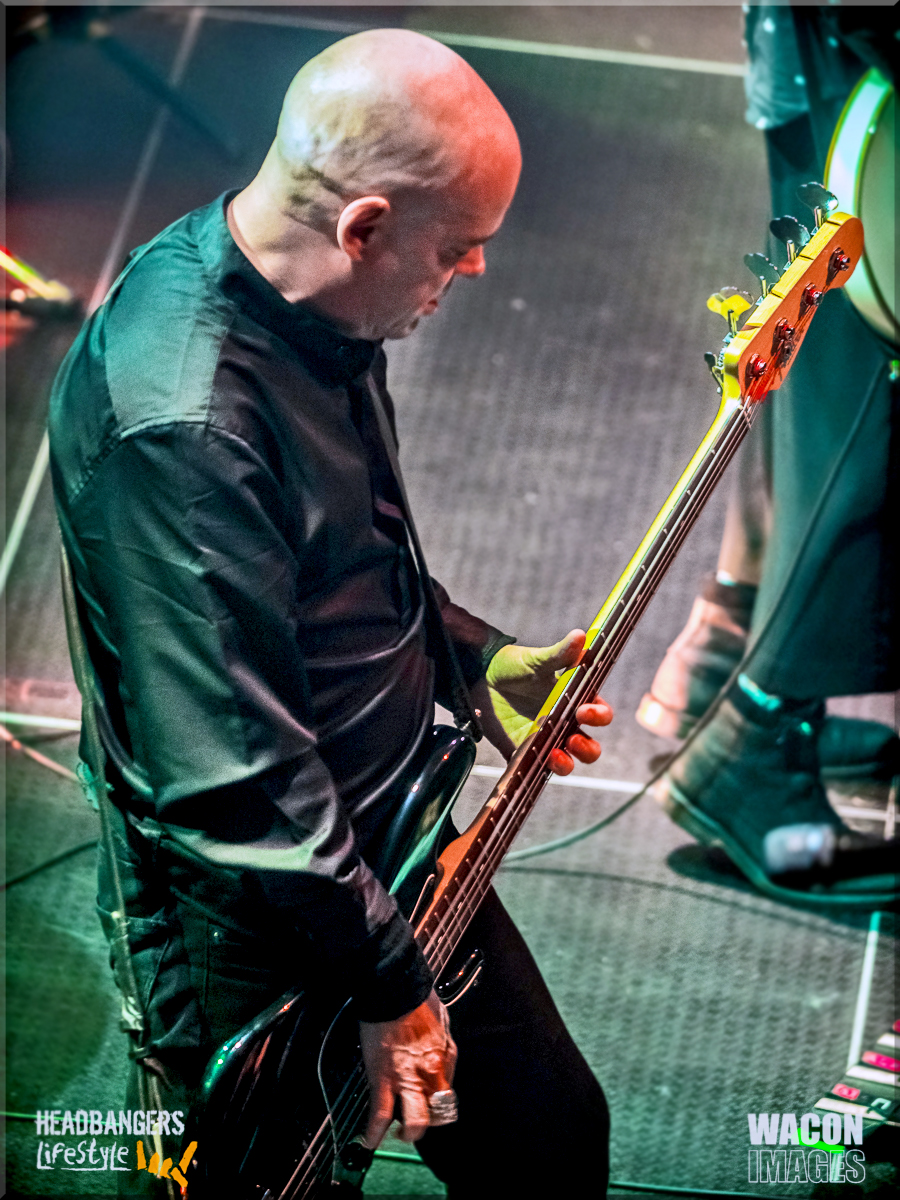 Tonight is a true celebration of great, timeless music, therefore bottles of wine circulate on stage and The Mission gives a performance only The Mission can do. When it is time for the first encore Wayne starts of with a beautiful version of ,,Bird Of Passage’’ just on acoustic guitar (supported by the female back up singer and lots of talking among the audience), followed by a full band explosion in ,,Butterfly On A Wheel’’ and ,,Severina’’. We definitely don’t want to end this party and gladly the quartet returns to the stage to give us 4 more songs. ,,Deliverance’’ serves as a logical closure and unites band and audience in a very special way and it defines that tonight’s mission has succeeded. 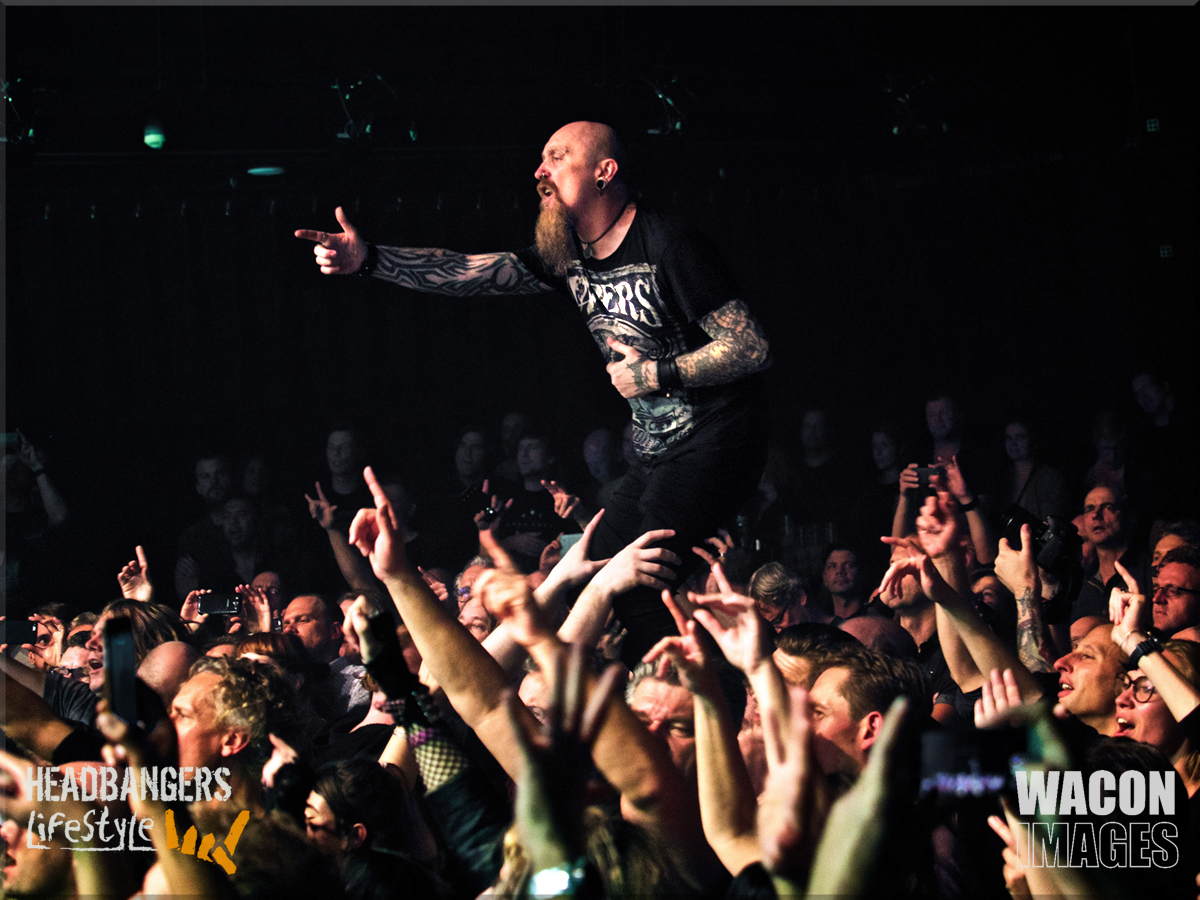 All photos by Ronald den Dekker of WACON-Images