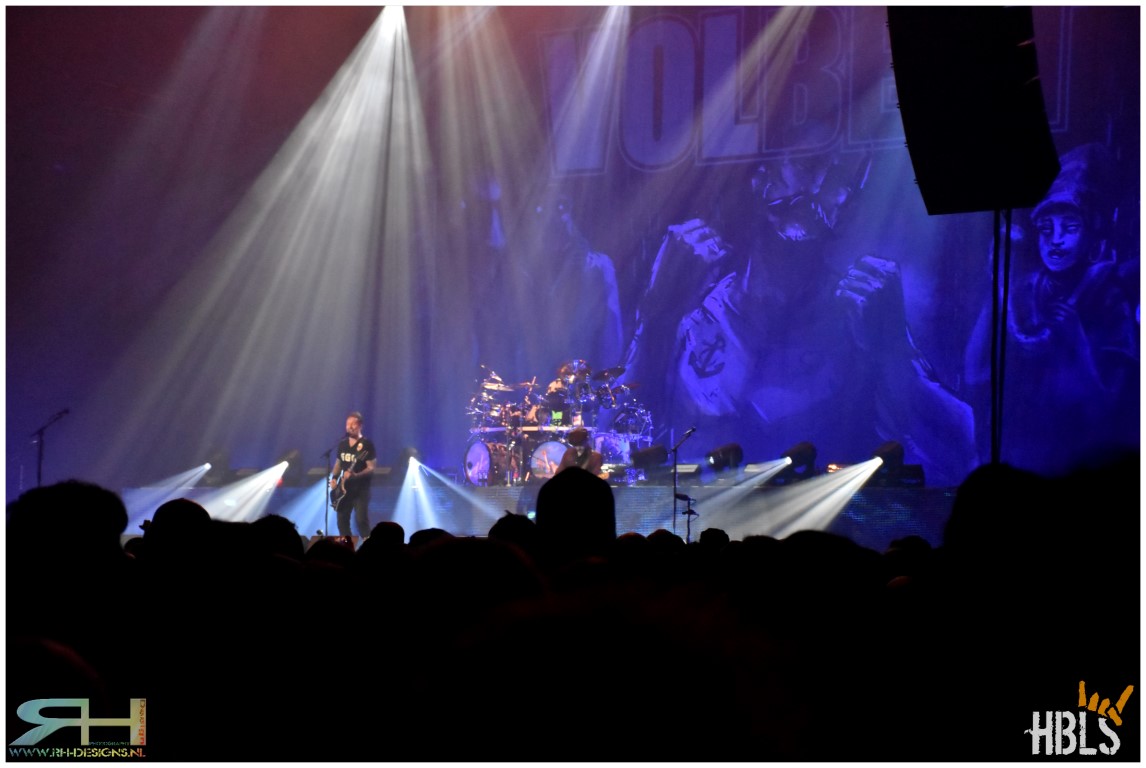 Volbeat is on a world tour since mid April [US, Canada, UK] and now it’s time to rock the European mainland, in support of their latest record `Rewind, Replay, Rebound’. 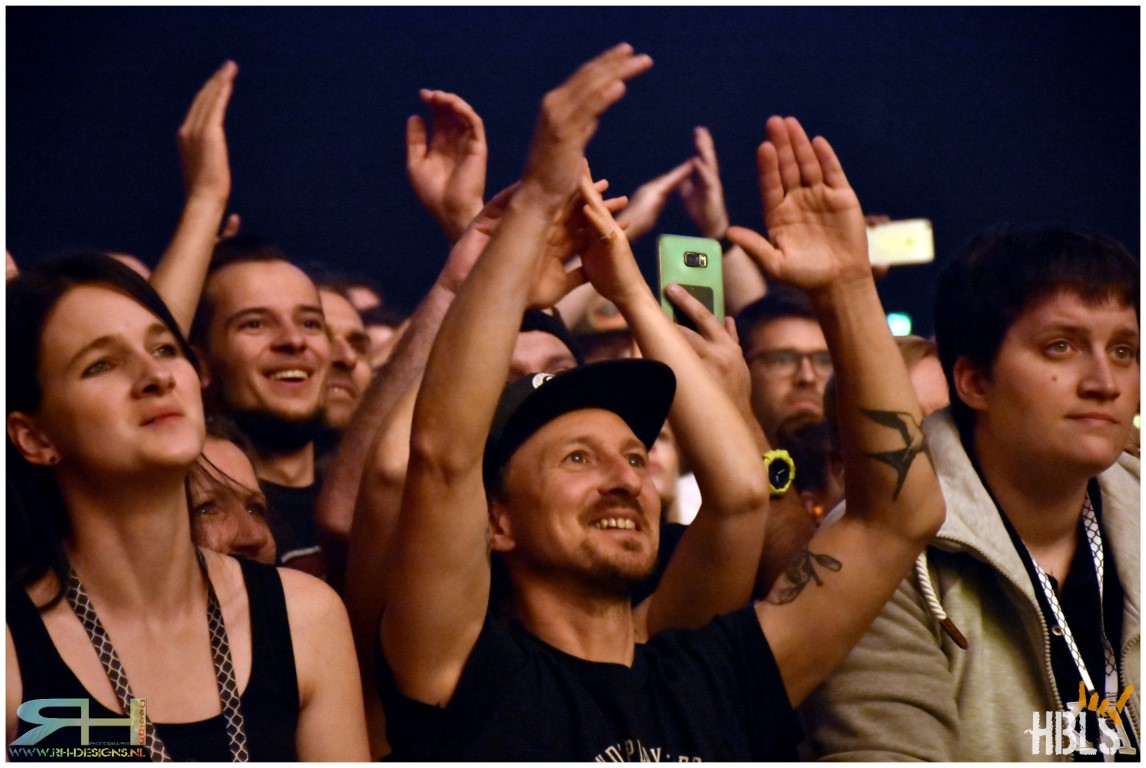 I got the chance to go and see them in the Rockhal in the south of Luxembourg. Before I have even heard one single note of music I have to say that this venue is located in an amazing industrial landscape. Right next to the hall there is a nice bar/restaurant with great food and drinks. Already earned 10 points!!
The main hall of the Rockhal, is with its capacity of +/- 6500 people, probably one of the “smaller” arena’s on this tour. 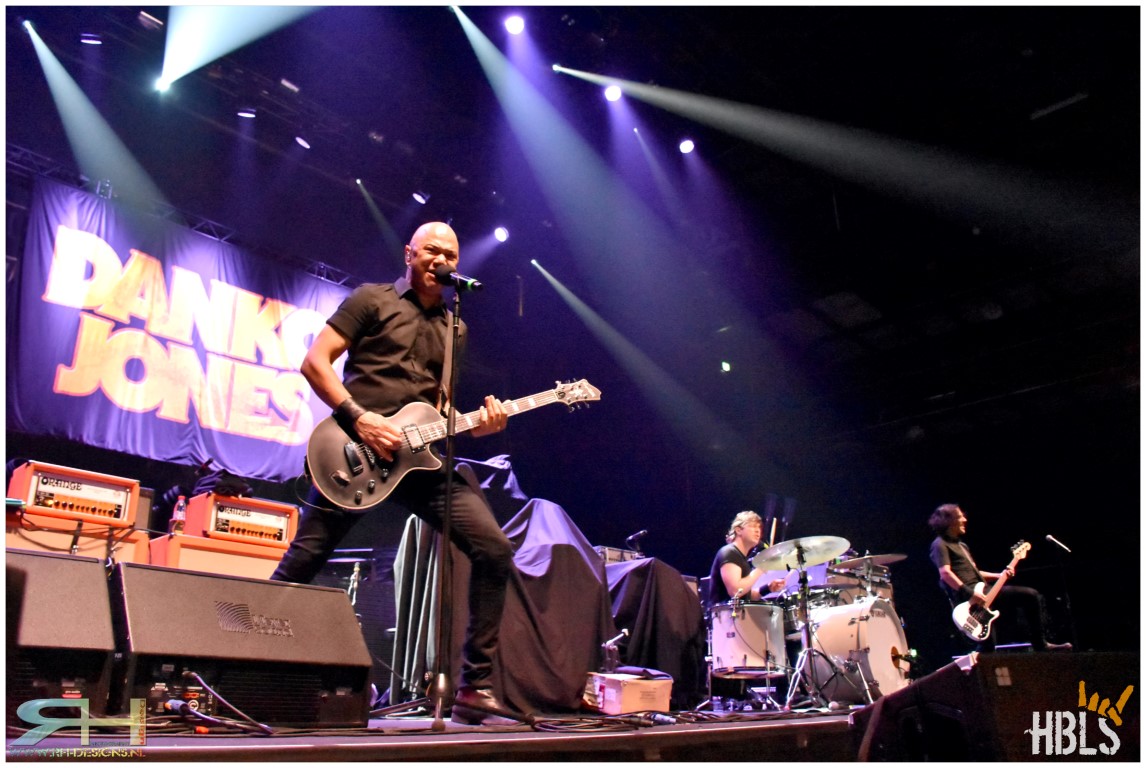 But before we can dive into the Volbeat show, Danko Jones had the honour to kick-off the evening, which he does this whole European tour. This three-piece hard/blues/garage rock and roll band proved to be the right choice to start this night with a dose of high-energy rock and roll. The sound was great and the Canadian trio got all the space they deserve to present themselves to the audience. Danko [lead vocals & guitar] and his mates John Calabrese [bass] and Rich Knox [drums] are on tour to support their latest effort `A Rock Supreme’, but they didn’t forget to play songs of their back catalogue, which they have built since 1996. We got a well-balanced 30 minute set list that pleased the ears on a satisfying level.
I think this was an absolute amazing opening of the night and for me they could have played at least another 30 minutes. Really, what a great performance!!! So whenever you get the chance, go, see and support them on their current tour!! 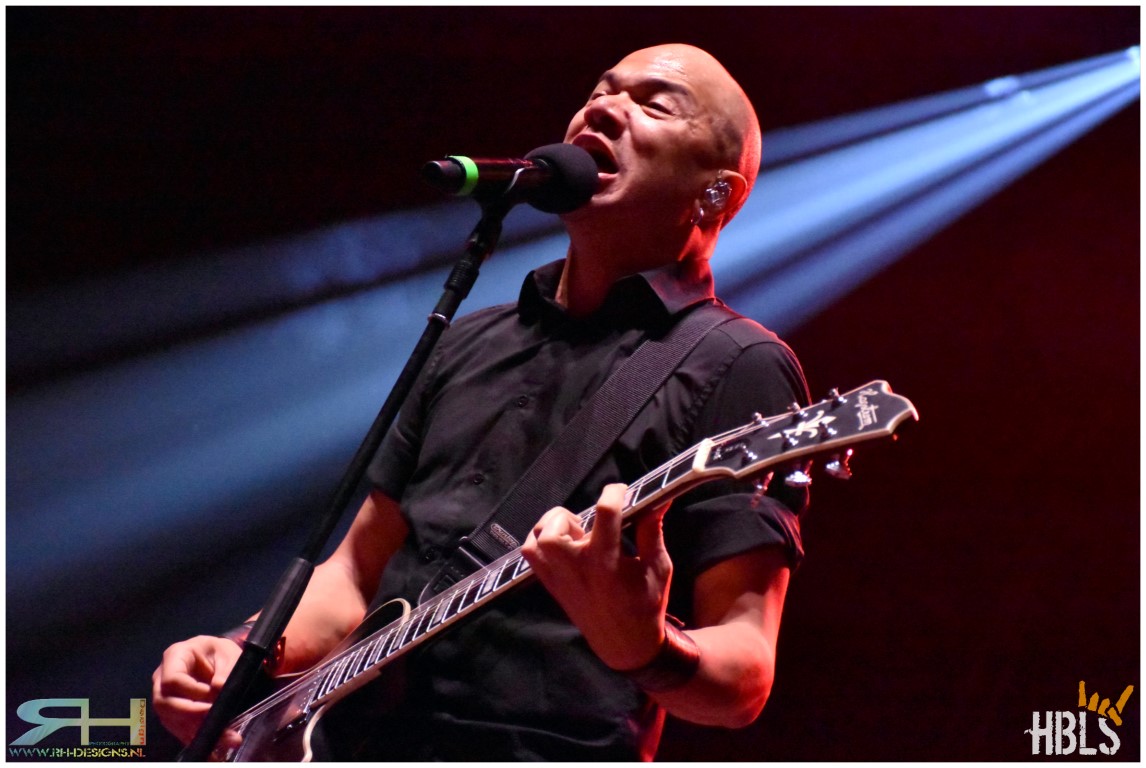 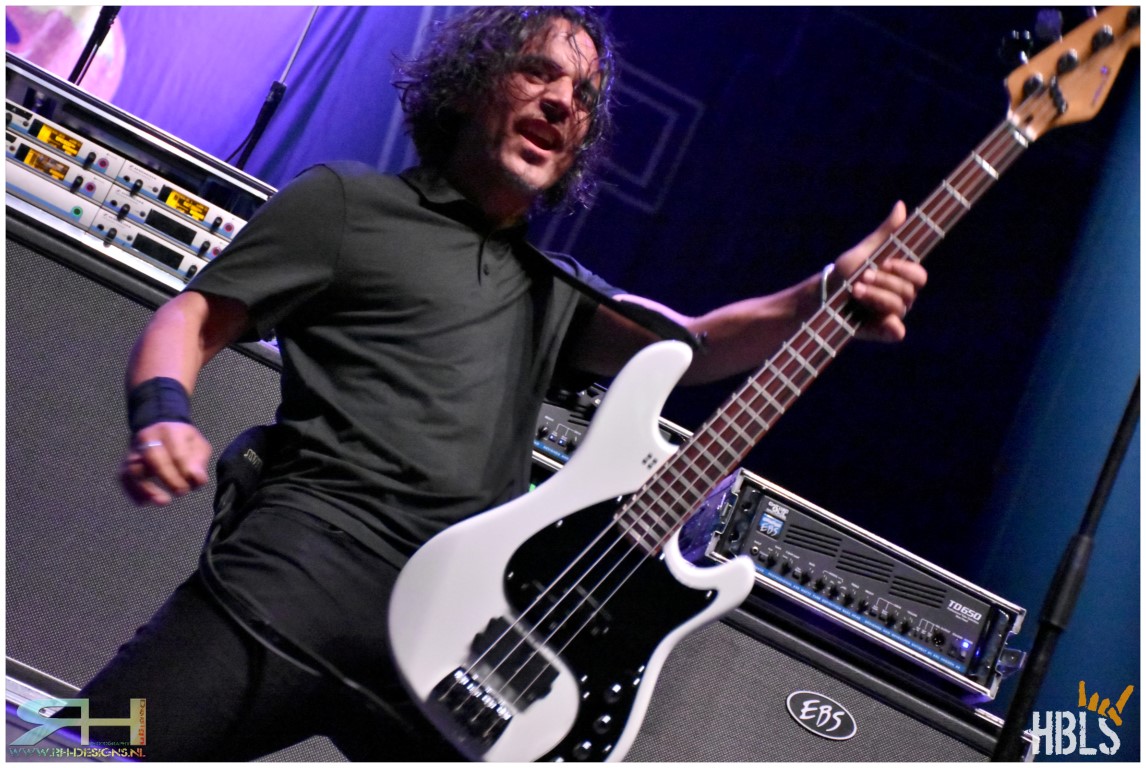 Next band band on the bill is the US based alternative/progressive band Baroness who is on tour to support their `Gold & Grey’ record. Their music has also a twist of psychedelic rock and is quite a stranger on the bill, compared to the musical directions of both Danko Jones and Volbeat. Somehow I did get the impression that the sound [on some occasions really blurry] and lightning during their show was a bit off, which didn’t help either to fully impress the audience. On the other hand the musicians seemed to really enjoy their moment on stage. Like Danko Jones, also Baroness delivered a well-balanced set list, which featured old and new songs, like ,,Borderlines’’, ,,Morningstar’’, ,,March To The Sea’’ and ,,Isak’’.
Due to the earlier mentioned sound and lightning “problem”, I can’t shake of the feeling this performance was out of place somehow. 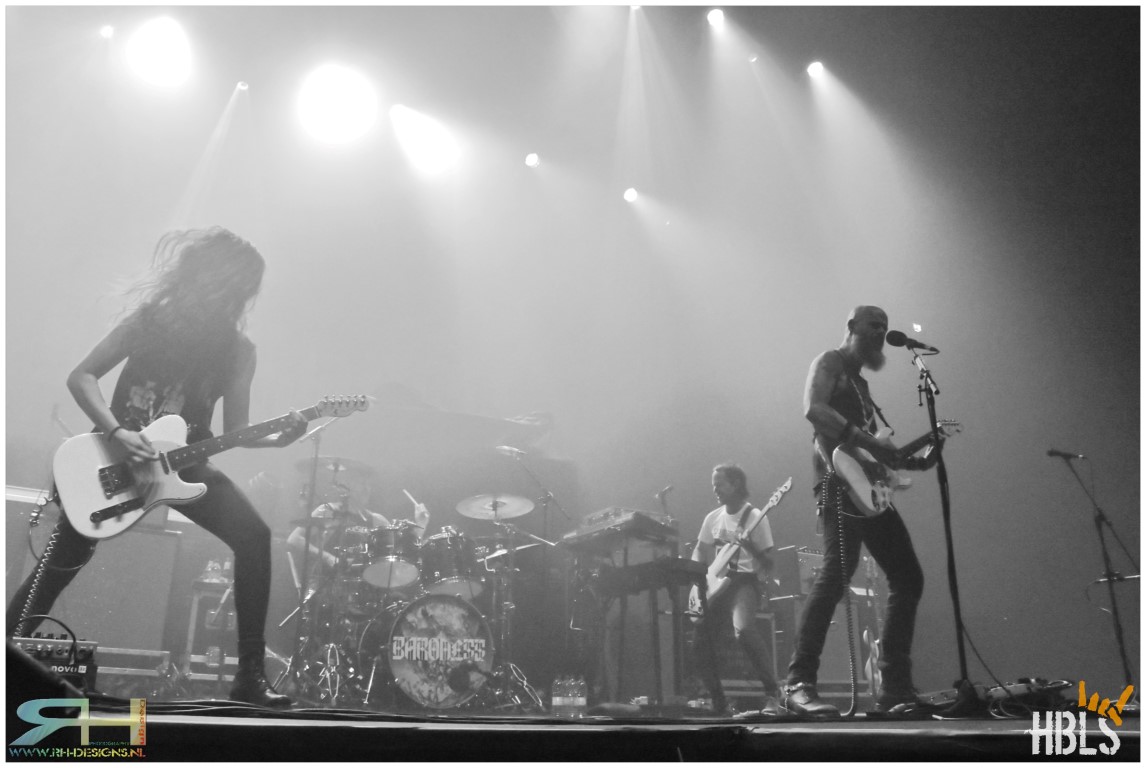 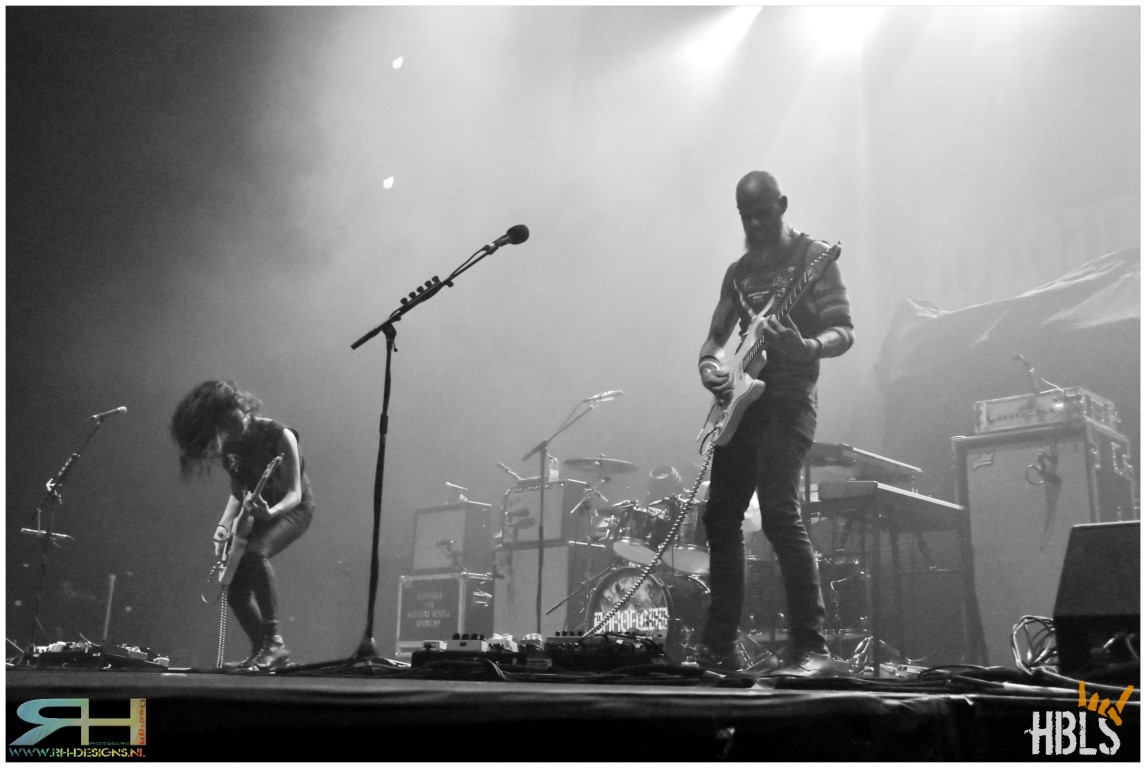 Finally Volbeat entered the stage and the hall is completely crowded with fans by now. When Motörhead’s ,,Born To Raise Hell’’ and Nick Cave’s ,,Red Right Hand’’ blasted through the speakers, the fans were aware the show was on. 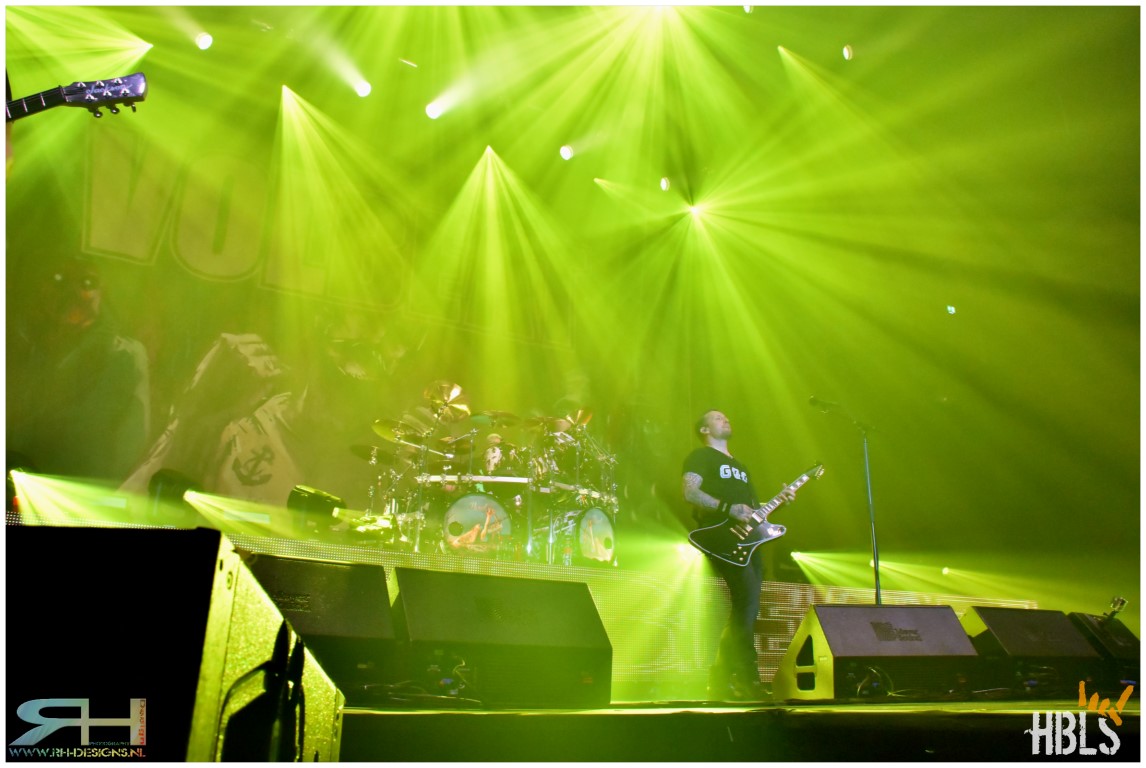 Opening songs ,,Hallelujah Goat’’ of the 2008 record `Guitar Gangsters & Cadillac Blood”, ,,Lola Montez’’ and ,,Doc Holliday’’ of the `Outlaw Gentleman And Shady Ladies’ album [2013] proved to be the right choice. Just as I had hoped for, Volbeat was in excellent shape. Mr. Michael Poulsen [lead vocals & guitar] and his band mates seemed to enjoy every single minute and note of the show. First song of the new album is ,,Sorry Sack Of Bones’’, followed by ,,For Evigt’’ [2016], ,,Seal The Deal & Lets Boogie”, ,,Sad Mans Tongue’’ [2007] and ,,Rock The Rebel/Metal The Devil”.
Then Mr. Danko Jones got back on stage to join Volbeat in ,,Black Rose’’ [2016] and it was obvious that both the Volbeat guys and Danko have a big respect and appreciation for each other. 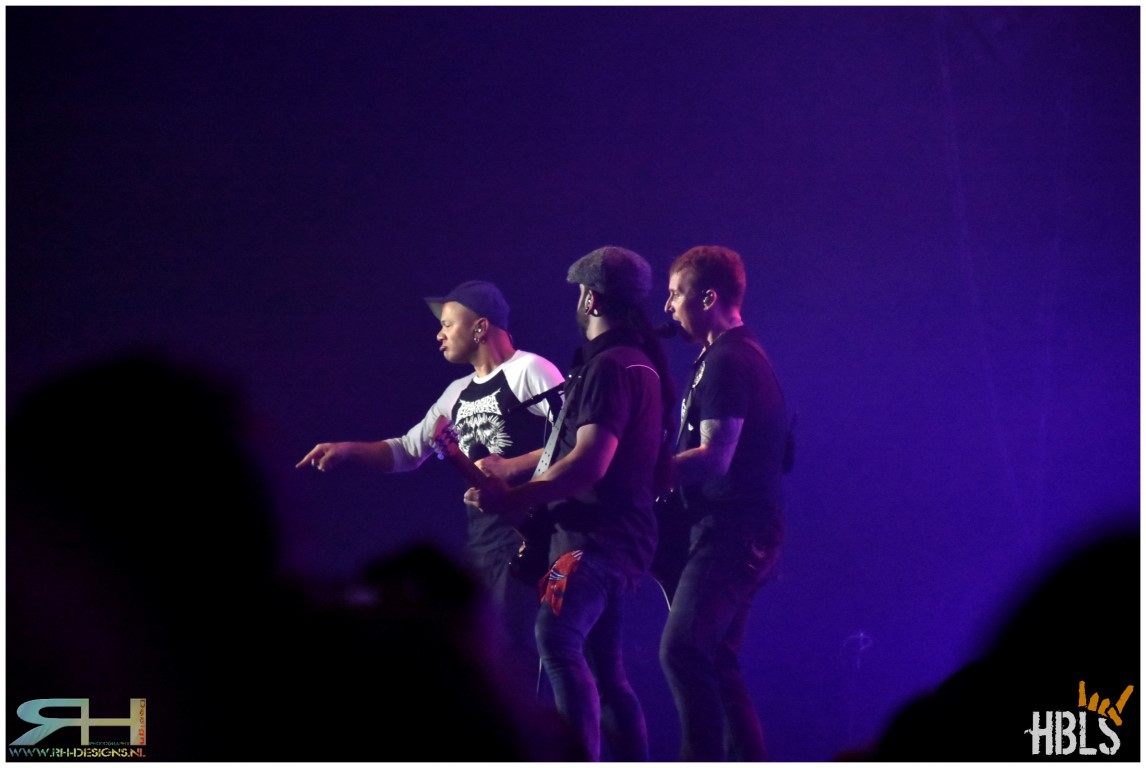 ,,When We Were Kids’’ and ,,Pelvis On Fire’’ from Volbeat’s last record is next on the set. Michael, Jon Larsen [drums], Rob Caggiano [guitar] and Kaspar Boye Larsen [bass] are really on fire in this song and the crowd fully enjoyed it. No doubt tonight’s show is all about celebrating Volbeat’s music, and only the music! The obvious Slayer influenced ,,Slaytan’’ (2016) , ,,Dead But Rising’’(2013) and ,,Fallen’’ [`Beyond Hell/Above Heaven’, 2010] continued the evening. 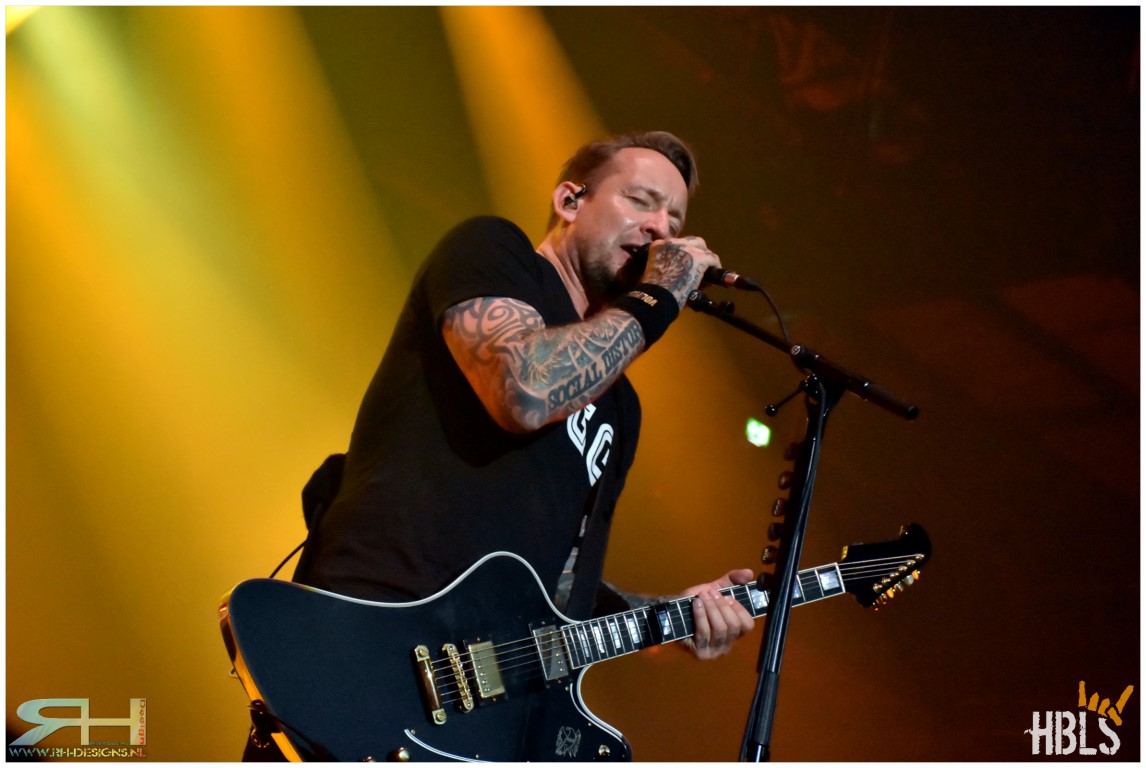 Over the years Volbeat did become a major and to tonight’s show proved to me why so much people are into the sound of Volbeat. This band knows that the music they have written in the past is part of their musical legacy and that is becoming quite something over the years. But they also know they have worked hard to come to this point. ,,Die To Live’ [2019], ,,Seal The Deal’’ [2016] and ,,Last Day Under The Sun’’ [2019] concluded the main course of tonight’s set. 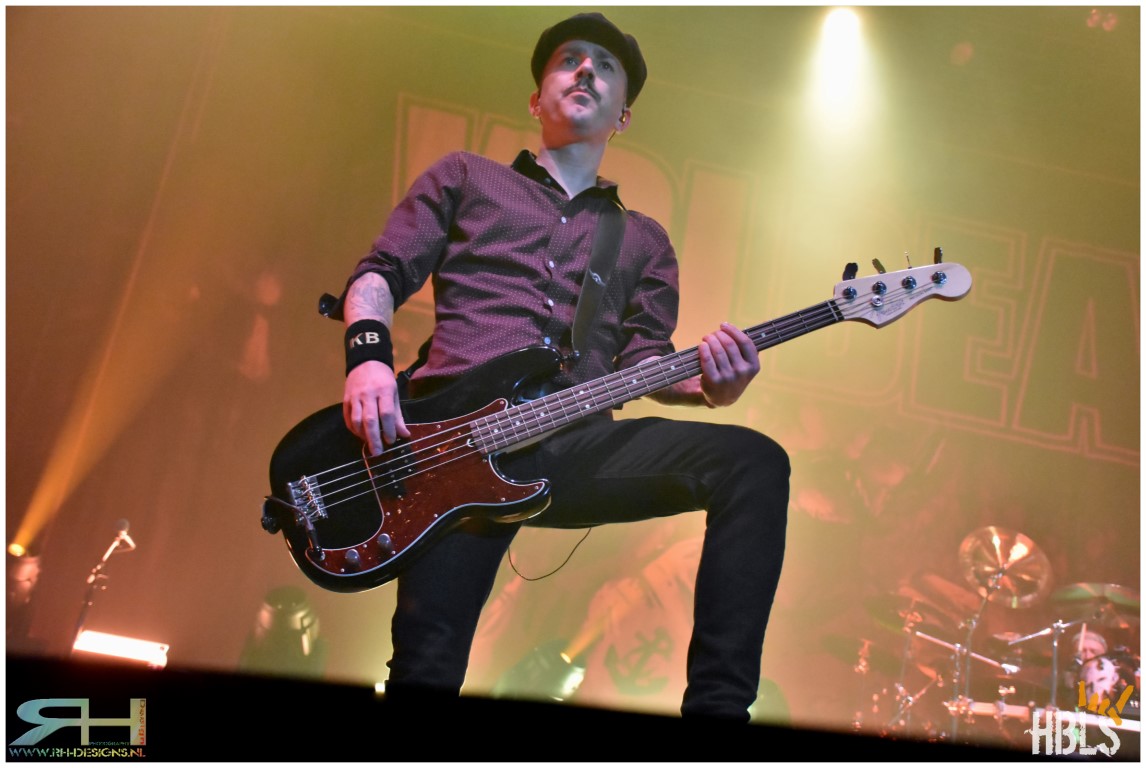 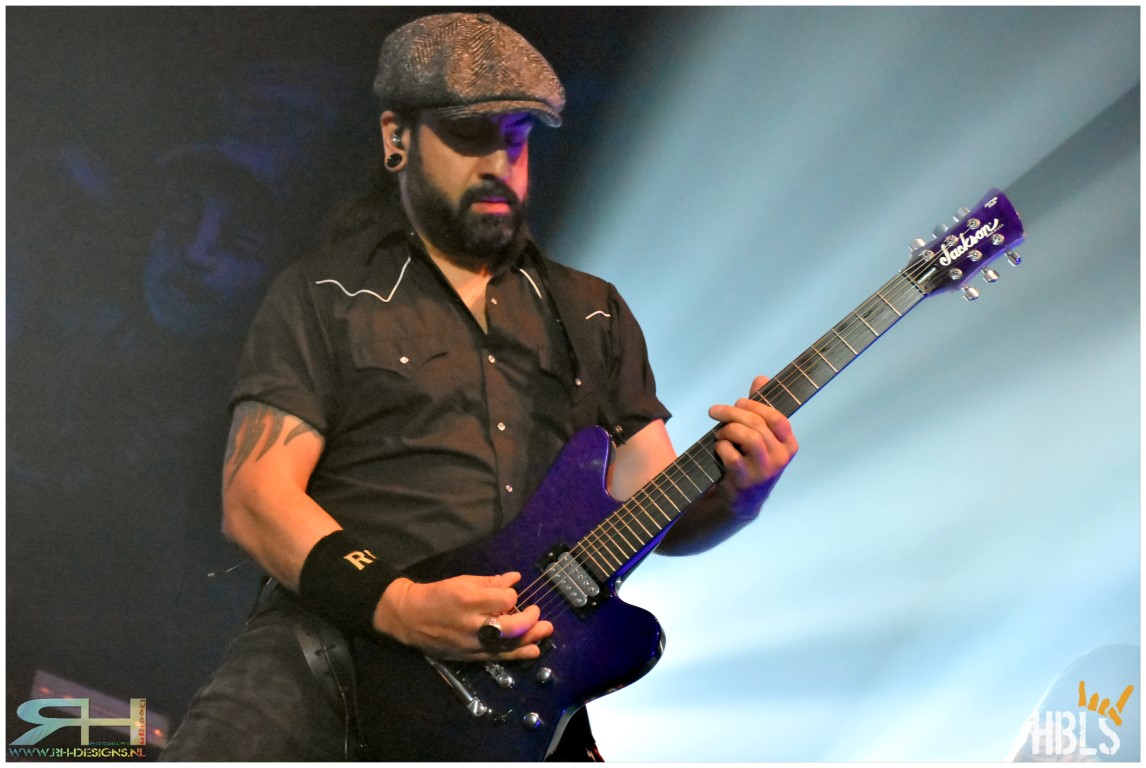 To me this was an amazing gig. I know that some fans of the older Volbeat material, do think that the last album is a bit too commercial, but believe me, tonight’s show proved the band did not sell their soul and is still the band that made them VOLBEAT. 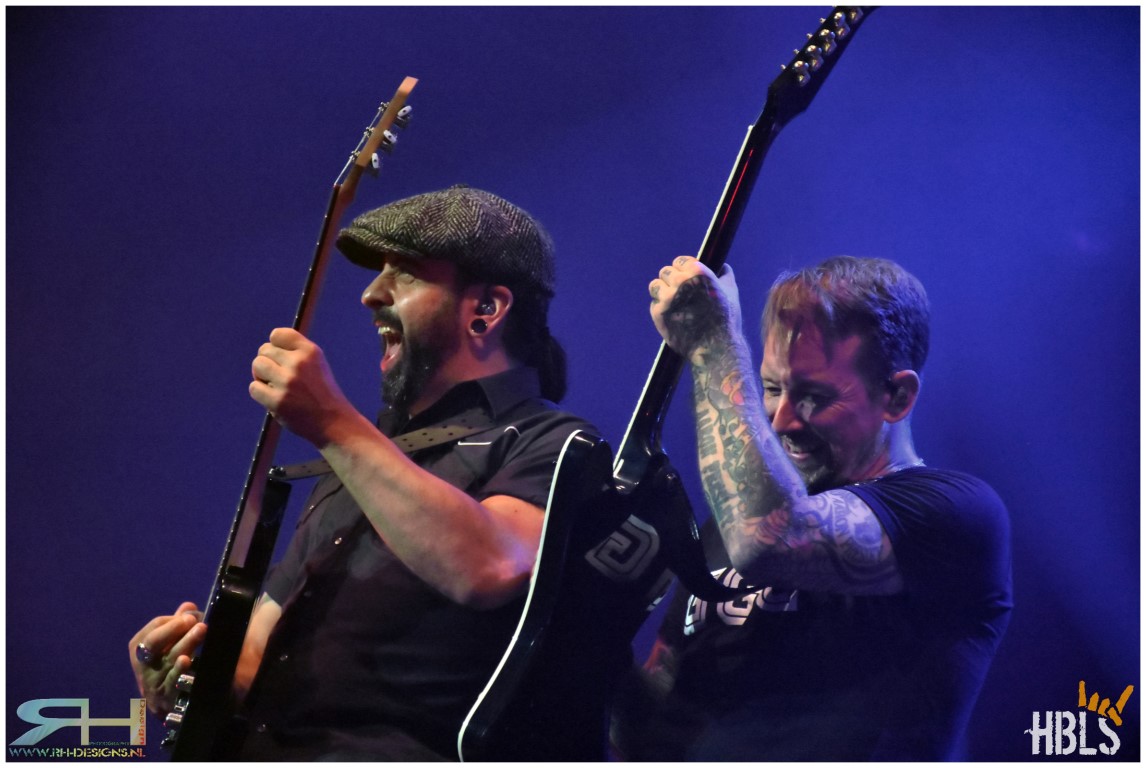 There are enough opportunities to go and see Volbeat and their support acts on this European leg of the `Rewind, Replay, Rebound World Tour’. I strongly recommend this package to all the fans of the new AND old work of Volbeat!!!!
—
All photos by Raymond Hellebrand of RH-Design
#dankojones #baroness #volbeat #headbangerslifestyle #hbls #awayoflife