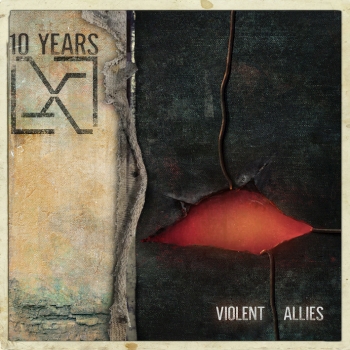 10 Years from Knoxville, Tennessee is a band that has managed to fly under my musical radar for many years as ‘Violent Allies’ is their ninth album but in fact the first one that has come to my attention. Based on what I have heard on ‘Violent Allies’ I think I will have to take a dive into their musical past as their music is quite appealing. Together with veteran producer Howard Benson (Sepultura, P.O.D., Adam Lambert, Bang Tango) who worked with 10 Years before the formation consisting of singer Jesse Hasek, guitarist Matt Wantland and multi-instrumentalist Brian Vodinh (guitar, bass, drums, keyboards and programming) came to the studio well prepared and had some 20 songs written. Benson went through them and tossed some 75 percent of them out the door forcing the band to re-write them or compose new stuff. At the end of the day twelve songs clocking almost 37 minutes together made the cut. On their last tours 10 Years added some touring musicians for bass and drums but obviously they were not deemed good enough to enter the studio as Brian Vodinh performed most instruments. The music of 10 Years is an energetic mix of alternative rock, heavy rock, a slice of nu metal and even some progressive elements can be heard as well. The band is at times a bit of a musical chameleon if you ask me. A track like ,,Déjà Vu’’ is bone hard and is a prime example of old fashioned aggressive nu metal (no wonder the band toured with Sevendust) while there are two extreme subtle acoustic guitar based instrumental pieces in the form of ,,Planets III’’ and ,,Planets IV’’ that makes you wonder if you are really listening to the same group. It is just an example of how versatile this trio can be if they want to even adding some adolescent rock songs like ,,Without You’’ to the musical mix. But above all we must state that the cutting knife of Benson in the song material has had its use as all songs are standing on their own and together form an album that is intriguing, versatile, at times exciting and at times atmospheric. Good enough to convince me to dive into the back catalogue of this band.