7 MILES TO PITTSBURGH-Revolution On Hold 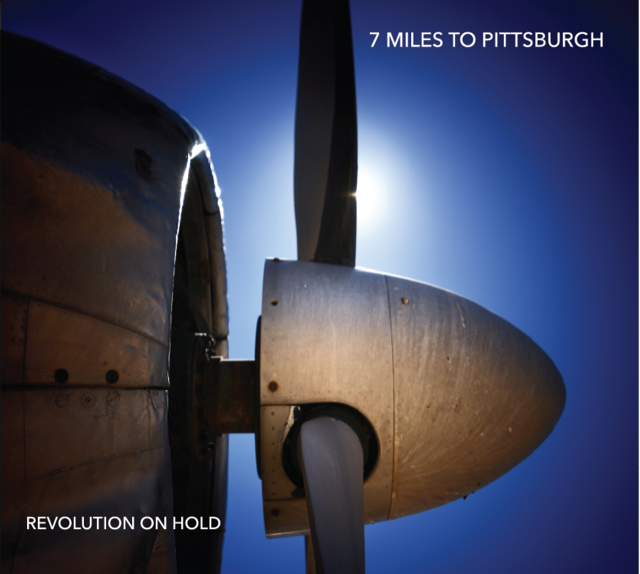 7 MILES TO PITTSBURGH-Revolution On Hold

Their self titled debut hit the scene like a sledgehammer, but is 7 Miles To Pittsburgh able to fulfil the sky-high expectations surrounding their 2nd album?

Following their acclaimed debut the power trio, comprise of former Elegy bass-player Martin Helmantel, Sleeze Beez vocalist Andrew Elt, and multi-instrumentalist Joris Lindner, saw themselves faced with the challenge of performing their music up on stage. With all musicians handling guitars and a mandatory keyboard player to deliver the massive wall of sound presented, the band soon added former Elegy drummer Dirk Bruinenberg as well as Elt’s bandmate in Physical Graffiti Remco van Zandvoort. The trio morphed into a full-blown band and their new album `Revolution On Hold’ clearly benefits from this shift of shape. As it turns out upon the first spin of opening the new album, the energy levels have been boosted by the addition of both, and a true and passionate live feeling radiates off of the edges of this album. With Lindner’s hands freed onstage, Bruinenberg clearly adds to the turmoil with his versatile drumming, as does van Zandvoort’s impressive pumping Hammond and keyboard swirls. More prominently in the front of the mix, the Hammond whirls heavily, with lead and rhythm guitar firing on all engines. In addition, Helmantel’s bass lines also are more dominating, likely because of a higher peaking treble that perfectly intertwines with the guitar parts. The rock solid progressive drum patterns are majestically adding to the poise. It simply all blends better than ever and calls for musical revolution.

With the debut in mind, the overall interaction has improved on all levels, adding to the joy of the album. An organic and loud classic rooted production emphasizes 7MTP’s influences and blows you off your feet. Raw and fierce ,,Bad Enough’’ opens, to plunge deep in a King’s X-vibe bridge, packed with breaks and sterling riffs. The Hammond is duelling with the guitars during the impressive mid section that spits turmoil. Topped of by Andrew’s raw and raspy vocals with merging head and chest voice, the potion is deeply rooted in the classic rock era. It is Plant meeting Rodgers’ bluesy brawls, while maintaining the heavy metal action-stretches. The song dies out in high gear with a whammy-transformed riff, in The Who’s best tradition. Blending all the classic ingredients with a modern metal approach, it leads to some stunning musical acrobatics as on the marvellous prog-toned ,,Olympus”, with its impressive melodies and steep breaks. Not scared to criticize today’s world issues, Elt propels the song. ,,The Fool On The Hill – Move In For The Kill”, clearly scatters with world powers and our current world leaders’ crude politics and oppressive tendencies. Social critical lyrics, packed with sarcasm and a little tongue in cheek, always widely interpretable. Thus adding up to the grandeur of the band totally nailing it. A genuine ,,Slide It In” vide is casted onto us during the storming entrance on the Hammond pumped ,,Sound”, about modern deafening digital versus the band’s [and music aficionados] love for analogue and classic organic sounds and recording. ,,Think” storms onwards with loud driven riffage and swirling keys. Turbulence which is smothered on its chorus and bridge, underlined by some tasteful sweep picking and unloading in another exquisite guitar solo with swirling Hammond and keys. Crafted around a likewise bodywork is the sonic bombardment of ,,Time”. Multi layered guitars with loads of reverb and clean picking, Lindner reveals his impressive skills, with Elt belting another impressive emotionally packed job. The King’s X vibe is glowing up during the intro of the impressively crafted ,,God Only Knows” once again. Shifting shape quickly to 7MTP benchmark progressive blues metal. The song has a grasping soul embedded with melodic gripping melody and chorus, oozing discomfort and comfort all together.

On a more intimate and emotional level, 7MTP delves deep with the wonderful ,,I Feel Your Pain”, unloading with drama, much like the impressive bass driven ,,Brave New World” with Elt sounding frail on the verses and unloading melodic grandeur on the multi layered choruses. Fusing all benchmark ingredients of 7MTP’s impressive character is the piece de resistance ,,Only A Fool”, the ominous ending of this second album. Slow paced it crawls forward with awesome vocal interaction throughout the track. Rousing chants revolting with Elt demanding stop putting `Revolution On Hold’, make the album go full circle on its almost conceptual tenure addressing the state of the world and desperate and uncertain times. Screaming guitars and the sound clip of a preacher top off the power hymn, making the album go out with a ravishing silence….
`Revolution on Hold’ definitely picks up where 7 Miles To Pittsburgh’s remarkable debut left off. Not only do they deliver an impressively crafted new album, the band also managed to inject more power with the addition of the two new marksmen, seamlessly adding up to the magic of the band. Gelling like crazy, the band fires into orbit to deliver one of the best releases of the decade, making their impressive debut look rather pale around its nose. It is classic and contemporary as well as fresh and modern, fusing 4 musical eras with genuine passion and love for music. Must listen – must have!
—