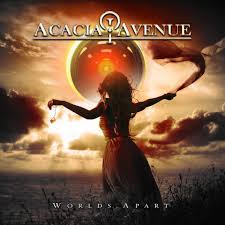 December 4, 2018 by Michel van de Moosdijk - More about our team

Acacia Avenue is one of the several groups/projects that Danish guitarist/producer/song writer Torben Enevoldsen has come up with. Torben has been around for a few decades now releasing solo albums and material with for instance Section A. In 2016 Torben together with singer Jerome Mazza released an album under the name of Pinnacle Point that was quite successful. But his main thing seems to be Acacia Avenue as ‘Worlds Apart’ is the fourth release under that banner. The formula is quite simple. Enevoldsen writes the material in cooperation with the various singers that he involves with the project, he produces, plays bass, keys and guitar. For this CD Torben has recruited a fresh bunch of singers. On the 2016 release ‘Early Warning’ the vocals were provided by guys like Rob Moratti, Steve Newman, Andy Engberg, Mats Leven and Torben Lysholm. Lysholm is the only one also involved with ‘Worlds Apart’ and has been working with Torben Enevoldsen for quite a while now, as he was also involved on older Acacia Avenue recordings. By using so many different singers it must be said that Acacia Avenue offers enough variety on the vocal front. The melodic rock songs with the signature guitar sound of Enevoldsen dominating the proceedings are now being sung by the already mentioned Lysholm, Peter Sundell, Dagfinn Joensen, Nicklas Sonne and Michael Bastholm Dahl, all experienced singers that have been/are involved with bands like C.O.P.,  Artillery, Pangea, Fate (also a band in which Enevoldsen has been involved) and Section A. This CD is one that has an overall heavy yet melodic sound and the songs are with one or two exceptions perhaps quite enjoyable to hear. Still, to me the best song on this record is a cover. ,,Don’t Chain My Heart’’ by Toto/Steve Lukather is a real quality composition that is as good as matched by Enevoldsen and company. What strikes me most though is the sound of Torben Enevoldsen. If you are familiar with some of his other recordings like Pinnacle Point you will recognize his specific signature guitar exploits giving this record something like an own identity. ‘Worlds Apart’ is not going to set the melodic rock world on its head but is a record that is worthwhile listening to.