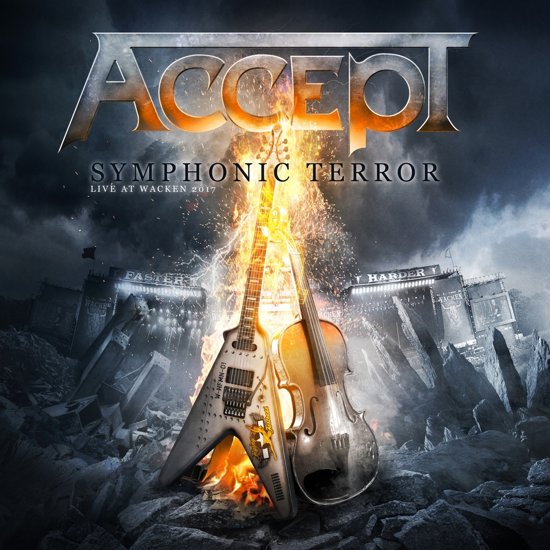 The gig at Wacken 2017 was a prestigious one for Accept. They played there live with the aid of an orchestra and guitarist Wolf Hoffmann (who that year released his solo-CD ‘Headbanger’s Symphony’) plugged that solo-effort with some guest musicians as well, taking his record to the stage. So a mobile studio and camera crew recorded a very spectacular event indeed. In this section we shall concentrate on the2-CD that has been released from this event. Around the release of this package news broke out that founding member Peter Baltes (bass) had decided to leave the band. Normally a bass player is seen as the reserve goalpost of a band. But there are exceptions like Iron Maiden’s Steve Harris and Peter Baltes. He is the man that kept Accept alive when times were tough together with Wolf Hoffmann who in a statement expressed his sadness over Peter’s decision but also stated that Accept will continue. So in a way this release is the swan song of Peter and what a way to go! ‘Symphonic Terror’ is the ultimate statement for Accept. Like an oiled machine, showing no mercy for a couple of hours you will undergo a heavy metal treatment that is second to none. The first part has five tracks of the band as they are, in full force with Mark Tornillo making us forget Accept had a guy like Udo Dirkschneider shouting the odds. Tornillo was a shot in the dark when Accept reunited in 2010 but turned out to be a knight in shining armour taking the band to new heights the last eight years. The man has pipes of steel. The second hit for Accept must be current drummer Christopher Williams. He has given this band so much new energy. Just listen to his sound and his performance, he does not miss a beat. The start is with heavy versions of ,,Die By The Sword’’, ,,Restless And Wild’’, ,,Koolaid’’, ,,Pandemic’’ and ,,Final Journey’’ a pure metal feast for your ears, before Wolf Hoffmann takes the stage with some guest musicians and Williams as drummer.

Wolf has always had a love for symphonic and classic tunes and now he had the chance to show a large audience how good and entertaining his musical journey is. All instrumental versions of course, it is a journey of about 30 minutes of classic music seen through the eyes of and performed by a metal head. The bulk of the record is filled with Accept playing with a very large orchestra. It gives the music a bit extra I must say but also must be said that the power of the band is that enormous that the orchestra for most of the time plays ‘second fiddle’. The set list that Accept put together is just outstanding. ,,Restless And Wild’’, ,,Princess Of The Daw’’, ,,Breaker’’, ,,Fast As A Shark’’, ,,Metal Heart’’ and last song ,,Balls To The Wall’’ in combination with the songs from the Tornillo era, it is like getting the best of two different era’s in the existence of Accept. So Peter Baltes goes out with a definite bang, leaving behind a rich legacy. The man that steps into his boots will not have it easy. And as for Accept, the search has begun… For the fans it is a matter of wait and see what happens but in the meantime they have something to cherish with ‘Symphonic Terror shaking the fillings out of your mouth.