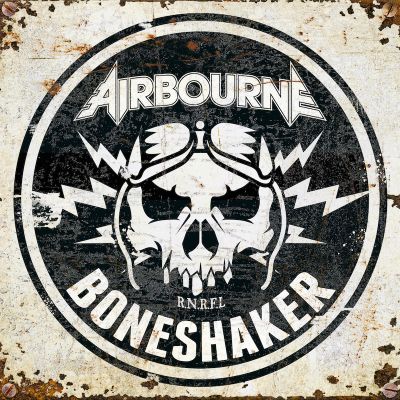 For their latest record the Australian rockers Airbourne locked themselves up in a famous studio in Nashville together with famous producer Dave Cobb who was itching to record a raw and pulsating rock and roll record. According to guitarist/vocalist Joel O’Keeffe the marriage between his band and Cobb was one made in heaven. Both parties had the same goal: making a raunchy and super energetic rock record with no holds barred. Dave Cobb inspired the band to go deep, basically writing the songs in the studio, recording them as an outfit and most of the time in one take as well, in order to keep that hardnosed and raw feeling with energy dripping of the studio walls as pure as possible. And that is exactly how ‘Boneshaker’ sounds, from the first to the last second. I have always been a fan of this band and with their new guitarist Matt Harrison the band has gone full circle on ‘Boneshaker’. There are no hidden messages in the songs, it is straight forward, it is honest, it is captivating and in some cases it is cheeky stuff as well lyric wise (,,Sex To Go’’). So far, so good eh? Yes indeed. But the ten songs on ‘Boneshaker’ are very short as well. The total playing time of the album is around 30 minutes. Okay, it is full steam ahead for that half hour but this is way on the short side. Or is the album going to be sold for a ‘nice’ price by Spinefarm? I don’t think so. That is basically the only point of criticism on this band that are sounding just as explosive and inspired as AC/DC in their heyday with Bon Scott and on the ‘Back In Black’ album. This is vintage rock and roll, a way of life for this band but it is over and done with just when the listener really gets into the mood. Around 30 minutes of playing time, that is a bad joke! But for the rest: this is how heavy rock and roll should sound!