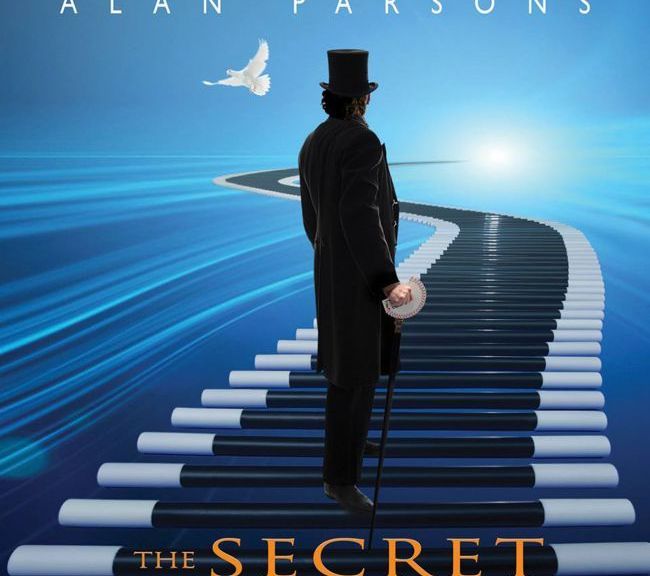 The iconic and Grammy Award winning Alan Parsons returns above the fold with his new album `The Secret’, to be released on April 26 through Frontiers Records. An album in the best Parsons tradition featuring a stellar line up with a host of impressive names from the music scene such as Lou Gramm (Foreigner), Nathan East, Jeff Kollmann, Steve Hackett, Vince Colaiuta and pop idol Jason Mraz. On `The Secret’ Alan Parsons follows the line of his musical storytelling as made famous with his memorable masterpieces such as `The Turn Of A Friendly Card’, `Eye In The Sky’, and the ominous `Tales Of Mystery And Imagination’ inspired by the thrillers of Edgar Allen Poe. Elegant symphonic rock albums in the vein of Pink Floyd’s celebrated `Dark Side Of The Moon’ on which fortuitously Parsons worked as a sound engineer. It’s a job he successfully maintained alongside his brainchild.

With Alan Parsons Project, Parsons fruitfully partnered with Eric Woolfson, and this might explain the break from the subtitle ‘Project’ a couple of years ago. Releasing his current albums under his name banner, Mr Parsons however upholds the sound of his prestigious past releases as well as bringing to life conceptual storyboards breath to life with symphonic orchestration. A powerful combination of classic arrangements, rock guitars and melodies, overthrown by a large sounding and gripping production that evokes the stories penned by Parsons. `The Secret’ is another one of those cherished gems that lands its own place in history. The Project’s famous releases addressed specific subjects moulded into a musical concept, like `Pyramid’ was about Egypt, `Gaudi’ about the artist, `Vulture Culture’ about consumptive societies, and `The Turn…’ about gambling, `The Secret’ is all about the craft of magic. With Parsons himself being a fan of the craft of magic and modern day mindf*cks, he unravels another conceptual red line on this brand new album. ,,The Sorcerer’s Apprentice” features all the specific and well-known symphonic elements from Parsons past and makes a burlesque showmanship’s entrance building tension. It’s impressive how mastermind Parsons manages to lively create the cinematic imagery that instantly nest in your mind and takes you into his magical world of musical scenery. A world he opens the door to with Jason Mraz’ performance of ,,Miracle”, a song in line with the iconic hits from the past. Throbbing bass and sound effects enhance the delicate song structures with Mraz unexpectedly fitting the profile perfectly. ,,Eye In The Sky” comes to mind, and in better times the song could easily have landed on the top ranks of the charts. Sonic scenery is casted upon us with the following ,,As The Lights Fall”, breathing the typical deep echoing sound of Parsons voice. ,,One Note Symphony” is the first track which new Alan Parsons’s addition Todd Cooper (The Judds, David Foster, etc.) flexes his voice around. Almost hauntingly paced it slowly unfolds with high tech sound effects and vocoder transformed vocals implemented to address progress of magicians using current technology for their craft and mastery. Cooper also handles vocal duties on the colourful ,,Soiree Fantastique”, dueting with Parsons himself, and on the powerful and symphonic rocking ,,Requiem”, that Cooper also fuses with a jazzy sub note picking up his saxophone.

A true highlight on the album is the magnificent ballad ,,Sometimes” on which Lou Gramm shines brightly. Sure his impressive voice has suffered from his yearlong battle over a decade ago, and his age also takes the tenor off slightly, but Gramm really delves deep to evoke the Foreigner grandeur. Well aware of his limitations he delivers and emotive and appealing performance that oozes comfort. Crafted with the same integrity as the band’s biggest hit ,,Old And Wise” it touches the soul with life lessons of the wiser elder, addressing the difference in style and grace of the craft. Drawing from the Beatles’ benchmark tonery is the timid acoustic floating and psychedelic ,,Fly To Me”, sung by Mark Mikel. The lingering ,,Beyond The Years Of Glory” is another benchmark slow mover oozing comfort with Cooper’s sax returning to the storefront. The song is also coloured brightly with a nice guitar solo from loyal Parsons instrumentalist Ian Brairson. ,,The Limelight Fades Away” is a pointy rock song, short and compact, nesting easily, opening the door towards the last track of the album ,,I Can’t Get There From Here”, another warm and impressive benchmark Parsons track.
Oozing the comfort of their heydays, this `The Secret’ really sucks you into the world of magic with impressive string arrangements and impeccable instrumentation. Alan who once again proves his keen ear for melody and impressive productions once again manages to deliver a sonic journey through his mind. It is a crystal clear production with powerful symphonic arrangements and it oozes comfort throughout. Though perhaps somewhat too low paced for headbangers in general, the album unfolds with powerful grandeur and is worth checking out. Widen your horizons and explore the world of magic with Alan Parsons’ `The Secret’.

The album will be available in various formats such as CD and vinyl. For the best experience I can advice to get your hands on the CD/DVD digipak edition featuring a Hi Definition 5.1 mix of the album. There will also be a super deluxe boxset for sale containing the CD+DVD digipak and 1LP Gatefold Vinyl, the `LiveSpan’ live recordings 2CD as Digifile, an exclusive `The Secret’ T-shirt with poster and a hand numbered lithograph of the cover artwork.

Info about the line up here