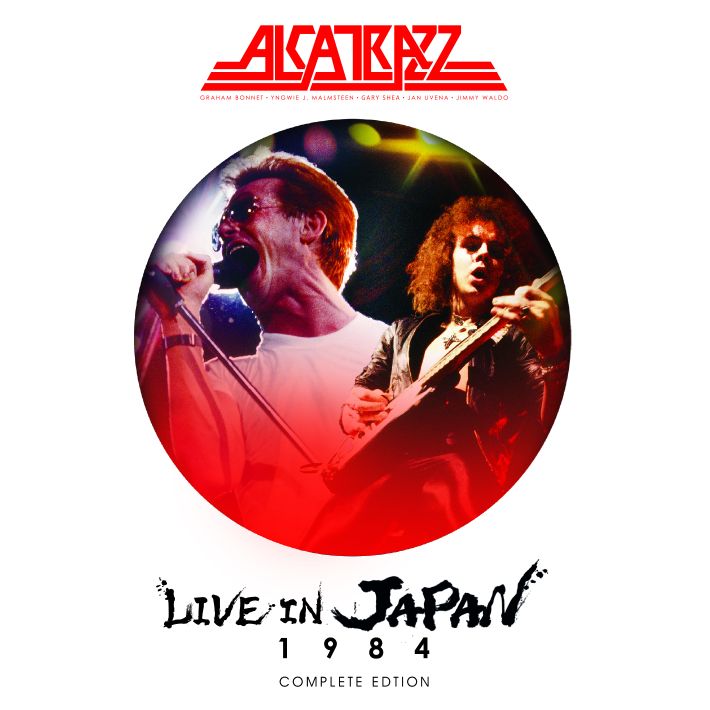 With the album ‘No Parole From Rock ‘n’ Roll’ Alcatrazz introduced themselves in 1983 to the metal and rock society. Young guitar virtuoso Yngwie J. Malmsteen had been teamed up with former Rainbow and MSG vocalist Graham Bonnet and the former New England members Gary Shea (bass), Jimmy Waldo (keyboards) and drummer Jan Uvena (ex-Alice Cooper). The album was well received and had some fantastic songs as well as impressive vocals. But it was Yngwie who stole the show. And he knew he was a star so it was just a matter of how long will this line-up stay together (Yngwie’s involvement with the band Steeler did not last long either). Early 1984 the band toured in Japan and recorded ‘Live Sentence’ on January 28. After the release of that 9 track CD Malmsteen started his solo career while Alcatrazz recruited a certain Steve Vai and released the absolute monster ‘Disturbing The Peace’. But it is not so much about the history of this band, it is about the journey that this live record has made throughout the years. It was also released as a video, in 2011 re-released with seven extra songs and in 2016 there was another version including a DVD. And now apparently the original 24 channel audio multitrack from 1984 was discovered at a clean-up of the archives. It has been digitally remastered and remixed and yet again re-released. I mean how many times can you re-release an album? What again becomes very clear is that the combination Malmsteen and Alcatrazz was not really a successful marriage. Yngwie’s playing is impressive, absolutely but he follows his own lead putting the rest of the band almost out of work by sometimes completely taking over. Listen to the old Rainbow hit ,,Since You’ve Been Gone’’ where he just does his own thing. Or the MSG track ,,Desert Song’’ that is being bombarded with short guitar interludes that were not there on the original version. Not that I find this a problem but it just goes to show that Yngwie used this band as a stepping stone for his own career and that he most certainly was not a team player. If you do not have any of the other released versions I suppose this release could be of interest to you especially if you are a guitar freak. If you have older versions, like I have, this latest money grabbing scheme of a record does not add an awful lot. But at the end of the day it is up to you! P.S. Can I say the misprint on the album cover looks a bit sloppy?