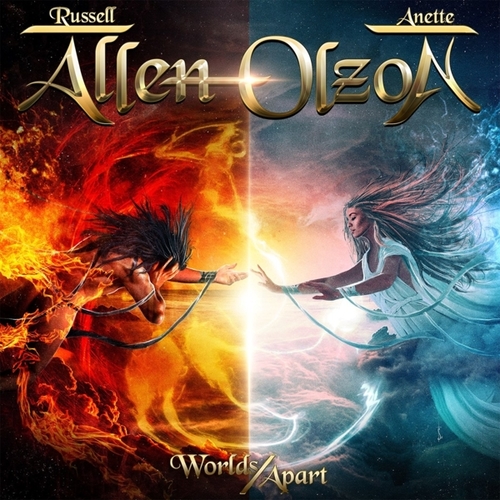 You might have expected a fifth opus from the lethal combination Russell Allen and Jorn Lande, the two prolific singers that brought us albums like ‘The Battle’, ‘The Revenge’, ‘The Showdown’ and ‘The Great Divide’. The first three albums were produced, written and played by Swedish mastermind Magnus Karlsson (Primal Fear) while the fourth was overseen by Finnish metal celebrity Timo Tolkki. But Karlsson is back at the helm with Allen and surprisingly not Jorn Lande but Anette Olzon who normally sings with The Dark Element. Not sure what the reason for not involving Jorn Lande this time is but listening to ‘Worlds Apart’ it become obvious and clear that the tandem Allen/Olzon works out just as fine. Obviously Anette Olzon does not have the raw power of Jorn Lande, but the sound and the way the songs have been written by Karlsson are so characteristic that ‘Worlds Apart’ basically sounds as a logical next step in the cycle. The concept is also clear, several songs are shared by the two singers, on other songs they get a solo spot while the music is bombastic, heavy, melodic and now at times because of the sound colour of Anette Olzon also more symphonic. When they sing together it comes across so naturally as if Russell and Anette have been together for years. It is the trademark of a good singer, they adept and improvise where necessary and overcome. ‘Worlds Apart’ is a fine record with outstanding songs that have a kick there where necessary or are more versatile at times. Further strong points are: the wizardry guitar of Karlsson, the colourful and heavy production of the whole enterprise and you have a record that fits like a glove. Luckily also on ‘Worlds Apart’ the quality of songs, vocals, instruments and total sound is balanced to the maximum so if you are familiar with the above mentioned titles ‘Worlds Apart’ will be a very welcome extension that matches up with its predecessors!