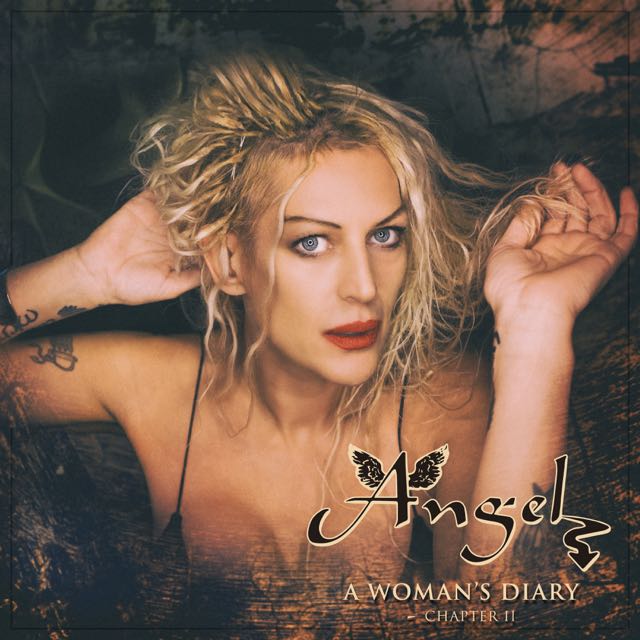 Helena Iren Michaelsen reports back with her solo project Angel for the second chapter of her diary exactly 15 years after its debut. While in the meantime crafting music for her band Imperia, she found time to record the unfinished business of her diary and pen down some heartfelt honest lyrics and stories revealing a different and frail side to the voluptuous sexy metal vocalist. With her radiating confident stage presence, curves and long golden locks, Michaelsen has landed deep in the hearts of many fans in the genre. `A Woman’s Diary’ lands on an entirely different level.

`A Woman’s Diary – Chapter I’ strayed (at times) far from her metal roots. The debut landed directly after the Imperia debut and caused fans to adept. Her biography at the time consisted of Trail of Tears (2 albums) and Imperia, with fans mirroring her personal debut to those, as well as to her stage presence. Those who looked beyond were in for a treat with the vocalist revealing more variety and unexpected musical twists over a personal lyrical identity. Though I wasn’t immediately impressed, the album slowly grew on me before vaporizing into the past. When this 2nd Chapter landed in my mailbox I looked up the debut for some Spotify-spins in my car stereo… and I admit: it aged well. Perhaps a little ahead of its time and not fulfilling the expectations of a metal singer’s debut, `A Woman’s Diary’ certainly gripped deep and stood the test of time. Maturing exquisitely, this follow up links to the 1st chapter but not seamlessly blends the music. `A Woman’s Diary – Chapter II’ is not simply a second edition of the first chapter. The album has all the characteristics, but also meanders in different directions. Lyrically it also depicts the insecurity and stride of life aside the unfortunate passing of her mother that left a mark. Binding factor are Helena’s vocals and her intimate and honest personal lyrics that truly affect your emotions.
The opening low tuned ,,Never Again” us a soaring synth prog track with welling vocals and an outpour of emotions about love leaving. It displays Helena’s wide and varied influences, better displayed on the following ,,Streetchild” that paws deep into the Kate Bush benchmark sound. Lightly poppy with a nesting chorus the song also reveals Michaelsen’s insane feeling for melody. Colourful arrangements and excellent musical arrangements gel well with the poetic lyrics. Vocally she taps from a poppier vein than ever before and it elevates amid the melancholic tracks of the album. Depicting her deep sorrow and frailty Helena keeps fusing her intense lyrics with exquisite arrangements like on the piano driven ,,I Don’t Believe”. The song flourishes with lush arrangements over a sturdy and powerful drums. Synth and keys add to the atmospheric tune about her life’s path and her uncertain destiny. It is almost benchmark for the album. Going completely mental and metal she dives into a gothic prog direction on ,,Imprisoned”. Towering and fierce orchestration. The song scorches with pain and breathes despair. Eclectic it enthrals before rolling into ,,Do You Hear Me cry” with its melancholic string arrangements. The Pink Floyd hovering riff is impressive and Helena switches registers constantly. From light frailty to chanting gut wrecking agony while emphasizing the lyrical content. Enya and Kate Bush come to mind on the piano ballad ,,Eg Ser” sung in her native language, before reviving the Pink Floyd guitar lick on ,,Happy Birthday”. The track wells with emotion and power, unleashes sincere agony in its lyrics. Again she belts an impressive job with emotions scattering all over the board. Powerful unloading on the choruses and switching back in subtlety constantly to underline her feelings. ,,My Desire” fuses southern elements with a pumping rock song and has Helena chanting before switching to her soprano highs. The subtle Spanish acoustic guitar blends into Arabic tinged structures. Moaning and swirling with sexy breathing the powerful density of the track reveals a lush sexual underscore. The song packs an erotic punch. Helena’s high-pitched operettic vocals also mark the opening to ,,Rock The Sea” which displays her wide range and spot on timing. It is the duetting section that gives the song it glance and makes it one of the most appealing tunes on this album. It also seems to mark the end of the many ups and down on the album as it settles into a more emotional outpouring direction. The end of the album is strung together by pain and agony with memories of childhood shining through. ,,Silence” is an acoustic guitar track with Helena’s voice warm and emotion-packed perfectly opening this trilogy of sorrow. When piano takes over, the song slowly develops and perfectly flows into the emotion laden ,,Angel Maria”. It is slaying the wall around one’s heart. Eluding is the pain-packed ,,Goodbye” reconciling in the passing of a loved one. The three piece evolves from pain to painful and calls out in sheer agony confiding in the final chapters of a lifetime. The album is closed with ,,Angel Maria’s Poem” featuring sound fragments from the past where Helena sings to an insecure piano-line before it slowly starts to well with lush ethereal string arrangement and concluding narration in Norwegian calling out to her recently passed mother.

,,Angel Maria’s Poem” underlines the emotion that binds the album. Her mother’s recent passing grips deep into Helena’s new album and it is heartfelt sorrow and agony amidst the despair that holds up the first section of the record. Much like a diary Helena’s lyrics are pointy and honest disclosing her personal being that impacts on her music. All songs are ‘coloured’ by well-crafted intense arrangements aligning with the lyrical content, making this a gripping roller-coaster ride that needs a few spins. Much like Eric Clayton’s `A Thousand Scars’ the album oozes the agony of life and delves deep in the mind of the artist revealing their emotions and insecurity while traveling to redemption. Surely not an album for the faint hearted, displaying identity and class…. Get close to Angel….