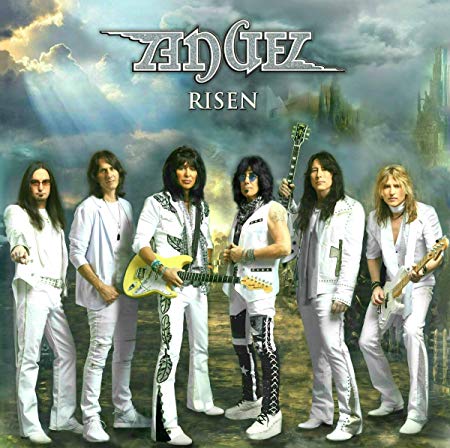 After both releasing solo albums in 2018 singer Frank Dimino and guitarist Punky Meadows teamed up for a tour playing a lot of old Angel classics. They decided to carry on together under the original banner with the four musicians they had in their touring outfit (drummer Billy Orrico, bass player Steve Ojare, second guitarist Danny Farrow and keyboardist Charlie Calv), wrote a bunch of new tunes and low and behold in 2019 there is after a few decades suddenly a new Angel album. It is a pity that original bandleader Gregg Giuffria hardly does anything in music anymore. The band can look back on a past that brought us a bunch of albums like the prolific debut album ‘Angel’ from 1975 and the live cracker ‘Live Without A Net’. Always dressed in white outfits and looking razor sharp Angel were for some time label mates with Kiss on the famous Casablanca label but was not as successful as Kiss. The main reason was that their albums were not consistent enough but I personally look back with fond memories on some of them. I must admit that the solo albums that Dimino and Meadows made were not very spectacular so I had mixed feeling when I got this one in. Still dressed in white and still looking razor sharp the 6 musicians come up with no less than 17 songs on the ‘Risen’ album. It would be a lie if I was to say that the current band matches up with the old formation. The band still has the same old problem. There is no consistency in their songs. When ,,Under The Gun’’ belts away with its up-tempo beat, big choirs and Meadows’ rocking guitar things seem to start cooking but a bunch of tracks down the line it becomes clear that there are too many fillers assembled on ‘Risen’ with the cheesy ballad ,,I.O.U.” as the most tragic failure. On ,,1975’’  Angel looks back on their own history. A few times the band flairs up with the rocker ,,Our Revolution’’ as a definite highlight. I wish a few more of these tracks would have been featured on ‘Risen’ that has a decent sound and also some impressive moments when Meadows swings the axe. But Frank Dimino has lost a lot in 44 years since that first album. That is nothing to be ashamed of but his performance is shaky at times to say at the least. The best song is saved for last, a new recording of their huge anthem ,,Tower’’. Decent but not as good as the original version. And that is basically the story in a nutshell. ‘Risen’ is every now and then a very okay CD, but there are too many moments where mediocrity plays a disturbing role. For the old fans the album is certainly worthwhile hearing but it does not make a lasting impression at all.