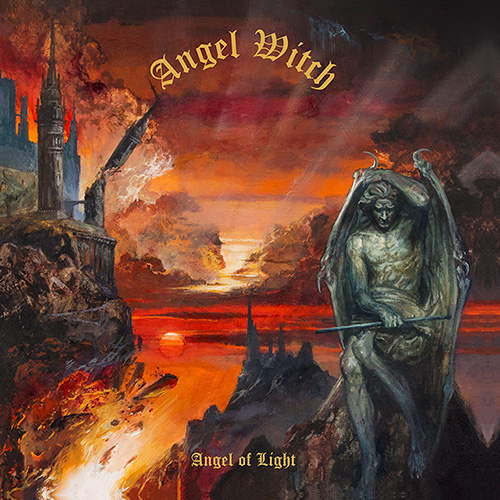 Another NWOBHM band that resurfaces! Or maybe that is the wrong expression as Angel Witch got back together some ten years ago and recorded their fourth CD ‘As Above, As Below’ in 2012. Anyway, the older readers might remember that quite legendary 1980 debut album ‘Angel Witch’ from power trio Angel Witch, led by guitarist/singer Kevin Heybourne. With his remarkable voice and ditto guitar sound the singer/guitarist really made an impact on the Bronze label those days but like so many other bands in that era things went horribly wrong. Numerous changes in line-up, two very mediocre follow up albums, disbanding the band, starting up again, even moving to America to restart the group before being tossed out of the USA because of not having a valid visa/work permit, things have not been going great for the now veteran musician who for a while became very disillusioned with the music business. But he is back with a band that has been together for some time now and a deal with Metal Blade, which does not surprise me as label owner Brian Slagel was a huge fan of that whole NWOBHM-era and I think that Metal Blade could do good things for Heybourne and company. For the first time in their career Angel Witch has approached the classy style they had on the first album with ‘Angel Of Light’. Although the sound and production is a whole lot better than four decades ago style and song wise ‘Angel Of Light’ sounds like the natural follow-up. Yes, it sounds old fashioned at times, especially when you listen to the ancient ballad ,,The Night Is Calling’’ that years ago was already covered by the Swedish band Nemesis, which featured a very young Leif Edling in the line-up. Still a great song with a slight doomy character. It seems that Heybourne recorded his guitar parts through the same Marshall amp he used all those years ago and that may be one of the reasons that this album sounds so familiar. And the songs are yet again long and adventurous, with tons of guitar work, mood swings, tempo changes and the ghost of Black Sabbath lurking on the back ground it seems. With his current band Kevin Heybourne has finally found the right track and musical path again that promised so much all those years ago. I mean, Diamond Head has re-invented itself the last couple of years and Angel Witch has done the same with ‘Angel Of Light’. Better late than never!