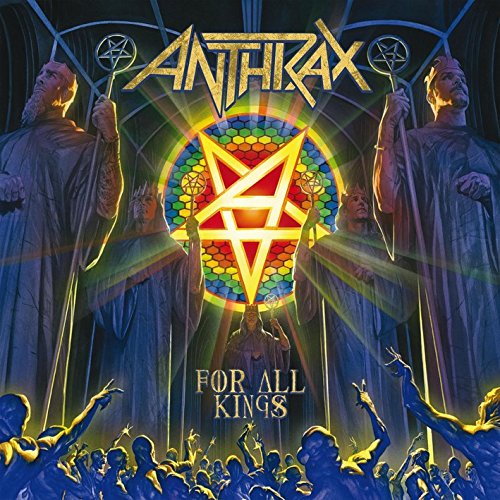 The previous album, ’Worship Music’ in 2011 saw the return of singer Joey Belladonna, now, five years later on the band’s eleventh studio album ‘For All Kings’ these thrashers sound more modern and driven than ever. After a bombastic intro they blast into ,,You Gotta Believe’’ which has all the typical Anthrax ingredients. It is fast and furious, melodic and with typical Anthrax riffing, courtesy of Scott Ian and new guy Jonathan Donais (ex-Shadows Fall). The song is immediately followed by ,,Monster At The End’’ which also has this familiar sound and reminds me of the old Anthrax. Belladonna is in the shape of his life, as he shows on ,,Breathing Lightning’’ with its great melody lines and the eight minute long epic track ,,Blood Eagle Wings’’. For people who like their thrash old school there is enough to enjoy, ,,Suzerain’’, ,,Evil Twin’’, ,,The Battle Chose On’’ and ,,Zero Tolerance’. The award for the song with the most different tempos, which makes it hard to follow, goes to ,,All Of The Thieves’’. On ‘For All Kings’ you hear Anthrax at its best, showing no signs of wear and tear. Stylewise it is old school thrash mixed with traditional metal and a solid addition to the band’s impressive catalogue. Be sure to pick up the 2CD digipack with four extra live tracks, you won’t be disappointed.