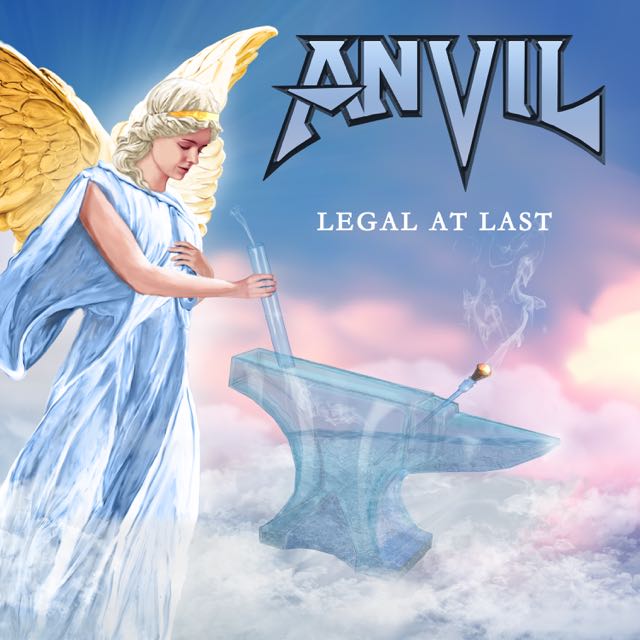 Referred to by founder Robb Reiner as “One more Anvil album”, the charismatic drummer immediately makes us aware of the band’s new endeavour being as consistent and benchmark as all its predecessors. `Legal At Last’ is the typical hard working metal band’s album radiating their commitment and unconditional love for the genre. AFM refers to them ‘standing solid as a rock in turbulent waters’ is even more spot on as Reiner’s. The next chapter in their illustrious career is written with the same determination as all previous ones. It is benchmark Anvil, benchmark metal.

The title track immediately makes clear the band is still the untamed force they’ve always been. Driven and with great stride the band thunders onwards. Lips’ typical growling voice over the years has lost some of its echo, but it gained an edge that is perfectly adding up the grit and gravel. Reiner and [bassist Chris] Robertson lay down a solid portion of metal thunder and the track is almost hymnic. A typical live track evoking serious fist pumping and head banging. ,,Nabbed In Nebraska” has a sheer metal spit to it. Driving guitars and ominous pace with powerful guitar escapades and drum interaction. The song’s chorus is chanting powerhouse and Lips’ solo is as typical as Reiner’s double-bass thunders added to it. The album progresses in typical Anvil style with speed metal moments and slow bangers going hand in hand. ,,Gasoline” is one of those top notch Anvil tracks that immediately feels comfortable with its slow dense pace reminiscent to the epic ,,Forged In Fire”. ,,I’m Alive” is crafted around a driving fierce 70’s lick with great appeal. ,,Talking To The Wall” has an intense riff with progressing notes warping you back to their debuting days. Same goes for ,,Bottom Line” and ,,Chemtrails”. Typical Anvil oozing metal. Absolutely wonderful is the high paced ,,Food For The Vultures” with Lips growling over a Motörhead reminiscent lick and his voice adds to that posture.

`Legal At Last’ is an enjoyable album and a typical Anvil record per se. It packs all the energy the band is well known for. However, it also packs another aspect of the band’s long lasting career; fillers. For some reason the band’s memorable moments alternated with lesser creativity and more predictability. The typical Anvil album that will appeal to their fans and won’t likely win them any new followers.