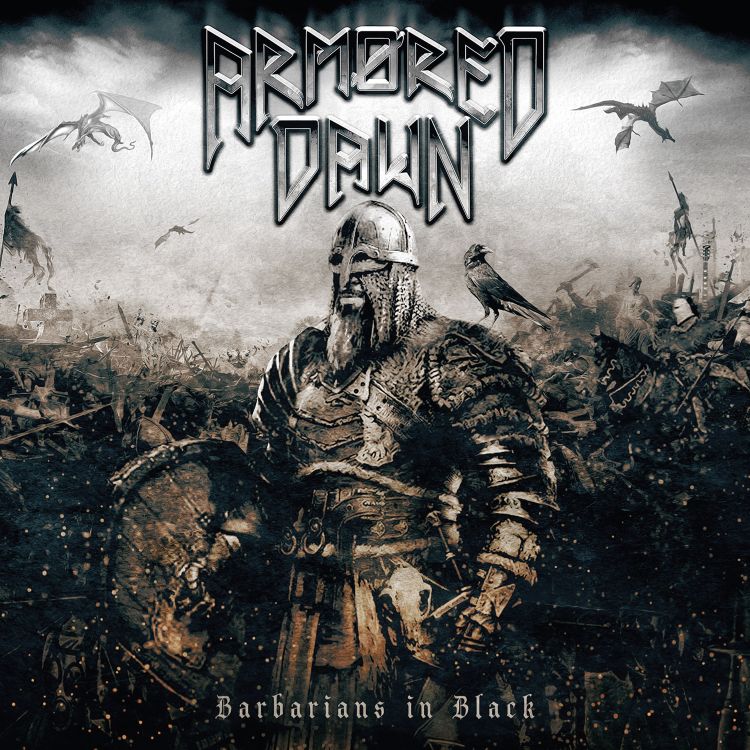 Armored Dawn from São Paulo, Brazil sends us their latest effort ‘Barbarians In Black’. The band members are Eduardo Parras (vocals), Timo Kaarkoski (guitar), Tiago de Moura (guitar), Fernando Giovannetti (bass), Rafael Agostino (keyboard) and Rodrigo Oliveira (drums). After an EP and full-length, both called, ‘Power Of Warrior’ (2016) and the single ,,Sail Away” (2017) we now have their next sign of life. The debut album ‘Power Of Warrior’ already caused a major stir in South America where they shared the stage with Megadeth, Symphony X, Rhapsody, Fates Warning and Sabaton. With this new album they set foot on European ground touring with the mighty Saxon. And I must say it’s not bad what these Brazilians came up with. Especially the sound is very good, but knowing it was mixed and mastered by Seeb Levermann (Orden Ogan, Rhapsody Of Fire) that might not come as a surprise. I prefer US Power Metal but I did find some nice moments on this album. For example ,,Bloodstone”, ,Eyes Behind The Crow” and ,,Survivor”. Yes, they are the hardest tracks on this album as you probably have guessed. I am less charmed with ,,Men Of Odin” and the ballad/single ,,Sail Away”. I disagree with the info sheet which tells me Armored Dawn fits the category Power Metal or Pagan Power Metal, because it’s too “catchy” for that. I have seen Armored Dawn on stage in the 013 venue, supporting Saxon, and I’ve got the same feeling from this album as from their performance in Tilburg. I think there’s a lot more in this band than they showed us so far. Let’s see what the future will bring but if you like Helloween, Freedom Call and Angra you might give Armored Dawn a try.