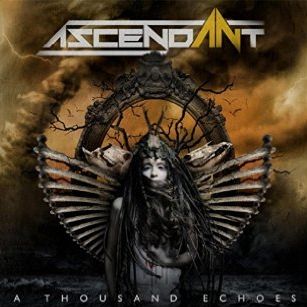 Power metal coming straight out of the heart of the United Arab Emirates! How about that?! The five musicians that participate in Ascendant started out in 2012 and it took them obviously a while to get settled. No idea how easy or difficult is was for them to develop themselves in a country where this kind of music maybe is not so popular and maybe even condemned to survive and forced to develop underground. But the guys have managed to record an album with nine tracks that so far is available as download. And credit where credit is due, ‘A Thousand Echoes’ is not a bad CD. In Youmni Abou Al Zahab the group has a front man with a good and strong voice and his English is excellent, so no strange accents in the singing but clear, powerful and from time to time high pitched as well. The two guitarists Ashish Shetty and Alaa Abou Saada surprise me with heavy and quite inventive riffs and some of the songs are just excellent like ,,Land Of A Thousand Echoes’’ for instance, that has a lot of different moods but is always forceful and entertaining. By far the most intriguing and best song of the record. Also on the production side Ascendant does not disappoint as the overall sound is pretty good. I can’t say that all songs are as impressive as ,,Land Of A Thousand Echoes’’ is, although the brute force that reigns the track ,,False Illusion’’ is nothing to ignore. The style of the band is without a doubt no nonsense straight forward melodic power metal that from time to time is gripping. As a debut record ‘A Thousand Echoes’ is more than a decent start for this band. If melodic modern sounding power metal is your thing it could be that Ascendant is a group that you will appreciate. Another piece of evidence that metal rules all over the world!!