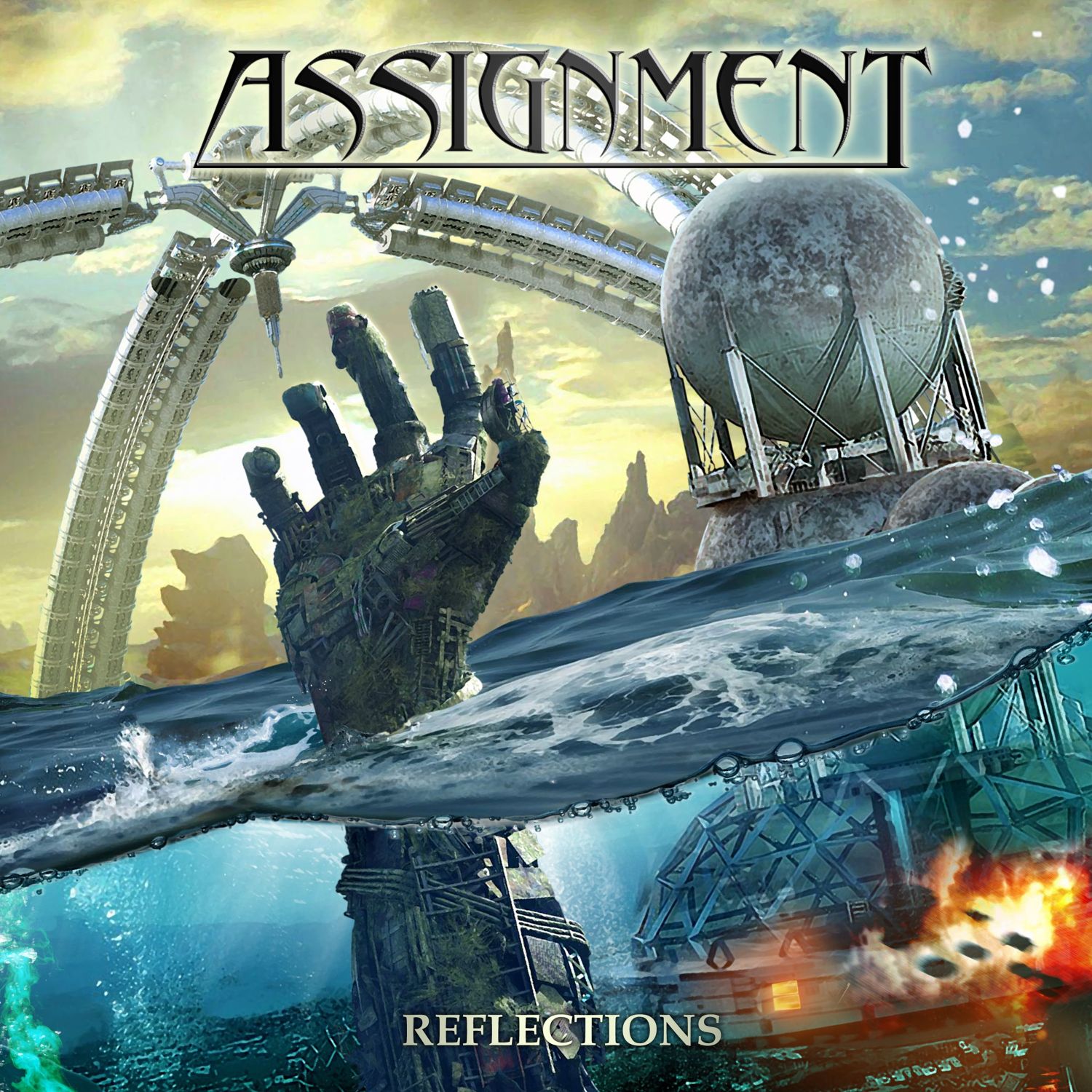 Announced by their promoter with “songs that will wow you” is nothing less than an understatement. Being succumbed with prejudice whether a band is able to live up to those words of praise I spun ‘Reflections’. Four albums in Assignment seriously wows with this brand-new release ‘Reflections’!

The atmospherically ,,Trilogia Balcania” opens towards the ravishing mesh of styles of ,,Merciful Angel”. Both songs are interlaced thematically by the remembrance of the bombardment of Serbia. The track morphs with spectacular time signatures and styles, making it one of the most incoherent sounding tunes I have heard in a long time. Making it more impressive is to fuse all this inconstancy with trademark ingredients that make it gel. Towering solos and staccato riffs pull it forward over the constantly time changes while a blistering (little isolated) blasting double bass keeps it rolling onwards with magnificent stride. Epical ingredients are welded onto a metallic carcass firmly held up by newly added powerhouse drummer Michael Kolar’ (Almanac, Horeseman) ponderous drums and insane polyrhythmic breaks. Vocally Diego Valdez has to adjust to the constantly changing spectacular sonispheres created. More epic and melodic is the following ,,Corporative Man” with recognizable melodies and hooks that suit the subtler power of Valdez’ voice. Gluing together elemental atmospheric keys with fierce riffs it keeps shedding skin paving the way for some insane 70s tinged Halford-like howling vocals. Switching from perpetual buzzing riffs to spawning melodies, the track gains enormous depth providing an excellent launch pad for Valdez’ powerful howls and low-end register. He packs tremendous stride and constantly adjusts his voice to the ever-changing background of the tracks. It is this interaction that marks the overall output of marksmanship on Assignment’s new album and especially its title track.

Opened with melancholic piano tingles accompanying ethereal vocals that add perfectly to the melancholic subnotes of the track, which is pulled by intense riffs and pompous keys. It’s a breather opening for the intense Teutonic pumping ,,Submission”. A song that gains momentum when the riffs are unloading over double kicks and keys start packing pompous power. Breaks scatter off the bridge section that is outlined by techno keyboard over the propelling riffs. Valdez switches from Halford echoing tone into a classic powermetal register. Vicious Rumors’ Carl Albert comes to mind…. There’s an unmistakable Dio tone present also without any mimicry. The mash of vocal style wells with power and drama, underlining the tracks diversity. Midway the track goes all WatchTower-ish with constant time changes and drums interacting on high level with the stunning guitar licks. Though insanely staccato its propulsive foundation holds up the bodywork of the jazzy elements fiercely. The blend of styles is ferociously divers, yet feels fluent and comfortable. The groove is blissful and it packs tremendous power and swagger. The band returns to epic metal with ,,Timeline” and its melancholic opening. Valdez’ vocals ooze tenor lows and Dio reminiscent hypnotizing power echoes adding to the track’s elusive pompous power. Göran Panic’ solos are jawdropping and remind of the Shrapnel records’ shred heydays.

One of the absolute most appealing tracks is the insane ,,Endlessly” about the father-daughter relationship against the backdrop of a painful family breakup. Perfectly outlined by the ominous dark twists added and vividly brought to life by the exquisite guitar melody that ebbs into the subdued carpet of keys. Tasteful it evolves with Valdez’ belting an insane performance that finds an absolute peak with the duet between him and Inés Vera-Ortiz of Inner Stream and Black Oceans fame. Her powerful clear vocals add perfectly to the overpowering echoes of Valdez and together they catapult the track into oblivion. It perfectly opens towards another highlight of the album; the epic ,,Unknown Hero”. Progressive it breathes fire during the opening before taking bits and pieces from Evergrey to Nightwish and Annihilator. It all explodes in this cold fusion of styles that, much like the opening two-piece radiates with top shelf musical craftsmanship and musical geniality, only to be topped by the closing ,,Silent Nation” that switches from generic keys and staccato riffs to sudden harsh breaks fluently floating into keyboard pumped sections. More metal it stomps with powerful breaks and hooks held together by insane melodies and Valdez’ vocals. Thrashy breaks frequently also bring Toxik to mind when the band goes mathematic technical. Piercing guitars suddenly pick up speed while dancing in between jazzy sections that are pushed into metal chords. Melancholic section with jazz piano enhances the tender atmosphere present, before powering up towards the next scorching riff driven segment. Its simply astonishing how the band manages to shifts shapes this frequently without straying from the root of the song. ,,Silent Nation” makes `Reflections’ go out with one big bang and instantly opens it towards the repeat button for a next spin.

‘Reflections’ is certainly an album for the die-hard fans of the genre. However, it also packs tremendous power and a lot of recognizability that makes very endurable and sustainable for metal heads to grow accomplished to. Even though some sections are packed with musical wizardry and shift from 3/8th signatures into 12/8 and even 5/4ths, the band manages to make it all gel perfectly well. Focal point are Kolar’s insane drum breaks and Panic’s fingerlicking guitar wizardry that propels the band. Diego Valdez adds his tremendously flexible powerful vocals and bends the tracks perfectly around the steep corner and countless breaklines that make the songs so insanely progressive. They make it feel comfortable and pleasant.