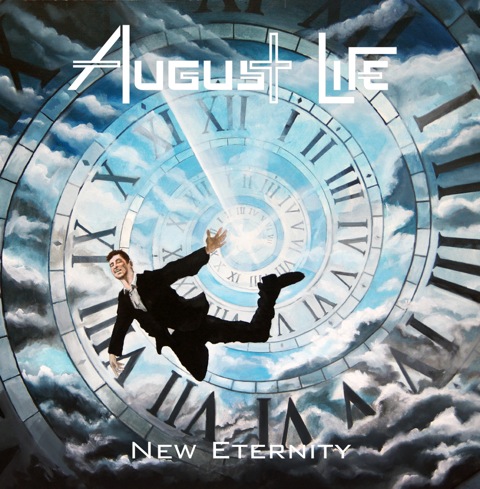 Well, my dear metal heads. From out of nowhere here is maybe this year’s best record so far. It’s October, nevertheless a certain place in my favorite top 5 for this year has already been earned by August Life. The lyrics of ‘New Eternity’ are from all times. You can read them from an historic perspective or you can read them from today’s point of view. Crazy times, if you ask me. Who is August Life I hear you say. Well, it’s a two men’s project initiated by some nice musicians from Breda in The Netherlands. They are Gert Nijboer (all guitars and guitar synth) and Bryan Ketelaars (lead and backing vocals). Bryan you might know from the bands Mythica, Lafordova, Auracle and Armageddon. Gert you might know from Versailles, Mischief, Heads Down, Picture, The European Death Riders with Neil Turbin, Dutch Disciple’ and Highway Chile. (Which, in my opinion, is one of the best metal bands ever from the Netherlands). On the album you can also hear: on drums Hans in ‘t Zandt  (Praying Mantis), bassists Peter Vink (Ayreon, KnightArea), Rob van der Loo (Epica), Marchell Remeeus (Helloïse, Highway Chile) and Harry den Hartog. The keyboards and Hammond are played by Gerald Vos. Backing vocals Amèlie Mangelschots (Auracle), Madicken Devries (Annatar, Heidevolk) and Samantha Greenwood. On cello we have Jacqueline Hamelink (Sounding Bodies). So here it is August Life ‘New Eternity’. A concept album with 10 killer prog rock/heavy metal tracks in the veins of  bands like Dio, Deep Purple, Dream Theater and Shadow Gallery. My favourite tracks are the title track,, New Eternity”, the compelling ,,Love-New Life” and the heavy Immortalized” and ,,Dead End”. Of course we have also have a ballad: ,,Nevermore”. What an amazing album by those two gents from Breda. Well… what are you waiting for? Go get this gem!!!