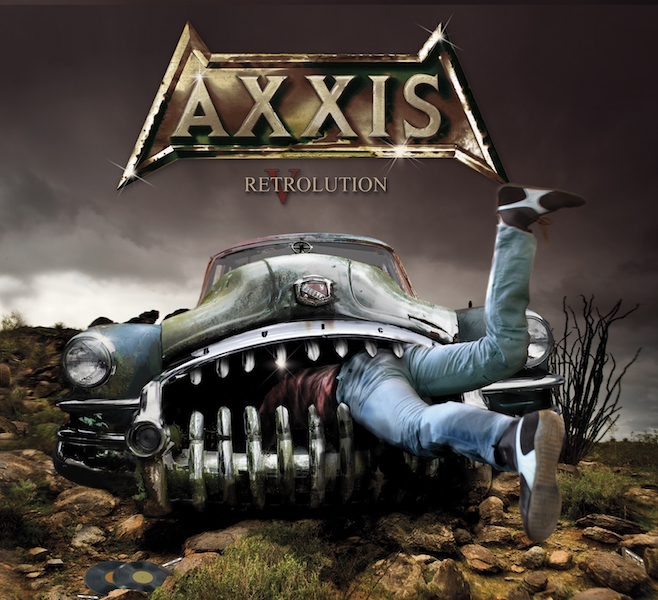 February 7, 2017 by Michel van de Moosdijk - More about our team

After more than 25 years in the business German outfit Axxis are still going strong. They have been around since 1988-1989 with singer Bernhard Weiss as the steady factor. Bernhard and keyboardist Harry Oellers decided to invest money in their own studio and started their own production/record company which gives them all the freedom they need. They even managed to get the rights back on the bulk of their older albums, and believe me, they have been quite active during the years, releasing also some DVD’s and a black edition and a white edition of ‘Kingdom Of The Night II’. ‘Retrolution’ is a fresh product, composed by the band, produced by Oellers and Weiss and released on their own label. The cover of the CD draws some attention as you see an old timer car swallow a human being. So how does Axxis sound these days? Well, not much has changed. The band is sticking with passionate melodic heavy rock with some raunchy guitar bits, melodic keys and a very steady rhythm section. Bernhard Weiss has a specific, little bit nasal sound with still that high pitch coming out on a lot of the songs. A style he has always had, so nothing new under the sun there. But when we talk about the quality of the songs I must admit that there are not enough good compositions there. After a few sessions not a lot sticks in my mind.  Not that ‘Retrolution’ sounds awful, that is not the case, but nowadays you need a bit more than what Axxis brings on that front. Sure, there are some moments there (,,Welcome to My Nightmare’’ is the best song on the CD, with a heavy riff, a good tempo and blistering solo), when you can hear that these guys are experienced musicians, but there are also moments were the songs just turn cheesy (,,Queen Of The Wind’’). I am sure that this record will find its way towards the diehard Axxis fans in Germany, but on an international level I am afraid that the band will struggle to compete with other melodic acts.