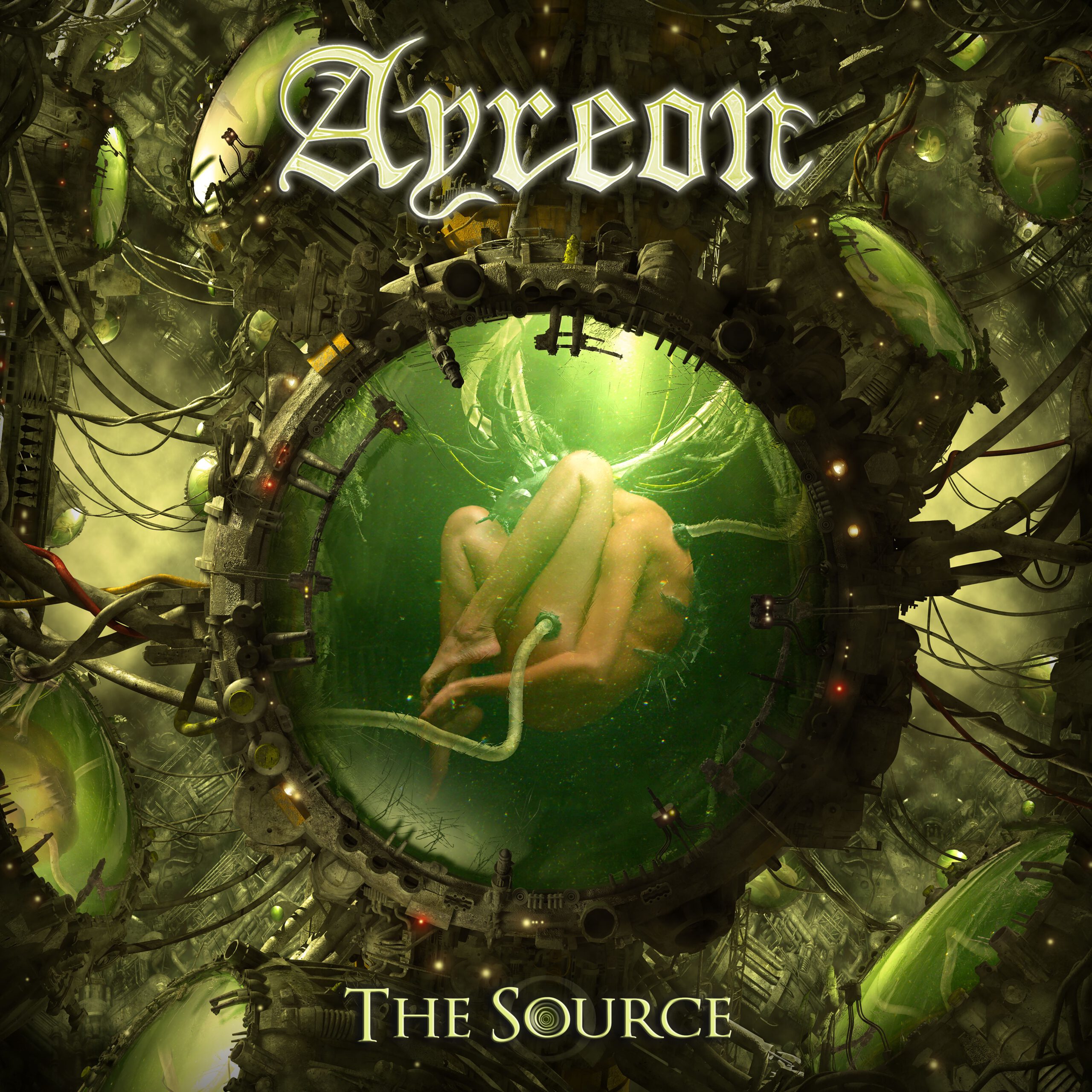 While Ayreon’s ‘Forever/Planet Y’ saga seemed to have reached its conclusion on the ominous `01011001’ album, it seems clear that Arjen Lucassen’s creative muses had other plans. Ayreon’s brand new 2 CD `The Source’ revisits the ‘Forever’ saga, adding a whole new chapter to Lucassen’s  Ayreon body of work and the captivating storyline. Another top-flight cast of vocalists and musicians, compelling songs, the overwhelming pompous sound, and intriguing story, `The Source’ offers everything that has gained Lucassen dedicated fans worldwide. A devoted and ever expanding cult of followers, idolizing the music and mind of their master, resulting in a wide spread rave when a new album is announced. Lucassen himself is a master in building tension towards the launch of his new album producing flings of his project on social media creating a storm. Much like in his music, he manages to keep you holding on tight for what the next journey has to offer.
Unlike his previous outings, `The Source’ however had a totally different launch board shooting the storyline and music into orbit. Arjen was fascinated by the artwork of French artist Yann Souetre he found browsing the Internet. The imagery caused a swirl of emotions and provided the perfect base for a new Sci-Fi horror story with the typical Ayreon twist. The creative process started to evolve, as did the musical context of `The Source’ and with Yann agreeing to have his art featured on the cover of this new album, the concept was born.

The Story of `The Source’ is set six billion years in the past relative to Earth. It begins on Planet Alpha, a world in the Andromeda system where computer intelligence has far surpassed that of humanity.  Alpha is facing a massive global crisis with ecological and political catastrophes threatening all human life. The Alphans (our human ancestors) try to save their planet by entrusting the global computer mainframe, `The ‘Frame’, to find a solution to prevent extinction. Given total control of the planet and humanity, `The Frame’ reaches the logical conclusion that its creators are the root of all catastrophes tied to the demise of the planet. The only way to solve Alpha’s problems is to exterminate humanity to restore the biological balance on Alpha. It leaves the Alphans no other option than to try and escape their horrific fate. But their escape comes at a terrible price. As Arjen explains in the bio: ,,The most dramatic segment on the album is the song ,,Condemned To Live’’. There is just one ship that is capable of making the journey to a new planet, and it can only carry a handful of people. So only those who have essential skills or other useful qualities are allowed to join. All others stay behind. Those who are allowed to leave are, as the title goes, ,,Condemned To Live”, as they wrestle the unimaginable anguish of leaving families and relatives as well as the entire Alphan civilization, behind to certain doom….”

Total annihilation is set for humanity with no hopes to survive. It’s the beginning of a story that contains everything that has made the Ayreon epics so endlessly fascinating all these years. First there are the musical riches, and then there is the multi-layered story line. It can all be interpreted as strict science fiction, but Arjen Lucassen doesn’t shy away from making references to actual events. Tapping into the present as much as in the Sci-Fi of the past, Arjen came across a documentary regarding the evolution of artificial intelligence surpassing humanity around the year 2050. His keen mind interlaced the scientific event with the story of the source. And much like Rush extended their reach with `Clockwork Angels’ collaborating with science fiction novelist Kevin J. Anderson reviving the concept of their album, Arjen Lucassen would be a perfect sparring partner for any Sci-Fi writer to join forces with. It would benefit the story and enhance the lyrical scenery captured in a novel. It all adds up to the turmoil Ayreon is presenting on this new epic masterpiece. Lucassen taps into the Star One era with crunchy riffs and anger-laden passages over an overwhelming wall of sound. Thick layers of guitars provided Mr. Lucassen himself as well as the all star line up consisting of guesting guitarists Paul Gilbert (Mr. Big), Guthrie Govan (The Aristocrats, Asia, Steven Wilson) & Marcel Coenen, are appealing to a wide array of fans in the heavy metal genre. It all is carefully woven together by a solid pasted wall of keyboards for more pompous effect and drama. An occasional Moog is present to represent the classic and contemporary side of Ayreon’s compelling music.
Marillion’s Mark Kelly adds a little fuel to the raging fire as do the vocalists of this epic saga: James LaBrie (Dream Theater), Tommy Giles Rogers (Between the Buried and Me), Simone Simons (Epica), Mike Mills (Toehider), Floor Jansen (Nightwish), Hansi Kürsch (Blind Guardian), Michael Eriksen (Circus Maximus), Tobias Sammet (Edguy, Avantasia), Nils K. Rue (Pagan’s Mind), Zaher Zorgati (Myrath), Tommy Karevik (Kamelot) and Russell Allen (Symphony X). An impressive list of heavy metal rooted shouters and singers that are depicting perfectly the direction of this compelling piece of metallic art. Long serving powerhouse drummer Ed Warby (Elegy, Hail of Bullets, Gorefest, The 11th Hour) lays down the rock solid progressive foundation on which this electric castle is build. Of course, Arjen Lucassen himself provides his talents as key player on a variety of instruments. It almost sounds patronizing to `as usual’ taking in consideration the class and skills of tall guy himself.

Musically we get shot into gear instantly. The harder edge of the story provided tempo and power to the progressive and action packed tracks at hand. Powerful double bass is fired upon us and the breaks and pace shifts are impressive. Warby unloads his power on almost every track on `The Source’ and he does add phosphor to the raging flames. Impressive fierce riffs propel the album onwards with excruciating power and precision. The timing of Lucassen is extravagant on the first section of the album in which the metallic heaviness goes hand in hand with progressive elements during the epic outbursts. Deeply rooted in the classic era of progressive and symphonic rock the songs reveal their most impressive side after a few spins of the disc and sonically Ayreon’s albums seem to bloom with futuristic injections and sound effects. Unlike most rock operas, Ayreon’s songs are not tied together by musical themes returning throughout the album but rather by lyrical themes. It is also the bump I personally have to take to keep focussed throughout the entire ride. Lucky for me `The Source’ has tremendous appeal because of its raging fire. The entire album (2) swings by in a mere second of time with so much happening you are unable to grasp for air. Spotlighting highlights is unnecessary as it is the grand total of the album, which is to captivating to discard any segment of the show. Just check out the intriguing ,,Star Of Sirrah’’ and the earlier mentioned masterpiece ,,Condemned To Live’’ with its theatrical drama, or the pompous and driven ,,Everybody Dies’’ which spits flames. If you want to have a point of reference for the melodies and keen arrangements on this album you have to check out ,,Aquatic Race’’ as were proggies best check out the epical ,,The Day That The World Breaks Down’’, with its plot twists and bombastic symphonic underscore. Much like on his previous albums the songs are tinged with Celtic folk (,,The Dream Dissolves’’) and Middle Eastern scales like the Phrygian dominant scale used in Arabic music, Flamenco and Indian Music. Both add up to the mysterious surroundings depicted sonically on Planet Alpha and the future colony. It’s those mysterious arrangements in which Arjen displays his wide array of musical influences and his exceptional talent as a composer in this particular field of expertise. ,,Deathcry Of A Race’’ embalms that mysterious and haunting glow magnified by the ominous keyboards and Warby’s sizzling high-hat. Lucky for us Ayreon build in a few resting spots on this new endeavour like the lingering ethereal ,,Journey To Forever’’ and the captivating ,,The Source Will Flow’’, to slower the pace and refuel for the next bombastic attack on the mind.

That last statement is also something non-believers will chew on and spit out like they did with all his previous releases. The action packed and dense mood set of the album might be an attack on the nerves of listeners. The narrative vocal interaction combined with the roleplaying and switches of vocalists as the story evolves, might be too much for a lot of metal heads and rockers. It is also why Ayreon has so many devotees worldwide who do worship the man’s musical ideology. The cocktail of sonically perfection combined with an intriguing concept is simply too magnificent and captivating to cast aside. At least give it a shot. `The Source’ is one of his very best albums… whether you like him, or not!