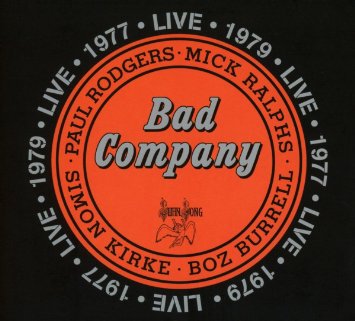 When Bad Company came together early in 1973 expectations were high. The band was fronted by singer extraordinaire Paul Rodgers who took drummer Simon Kirke with him from his former band Free. Guitarist Mick Ralphs was known from Mott The Hoople and bassist Boz Burrrell had earned his stripes with King Crimson. And with Led Zeppelin maestro Peter Grant as their manager it did not take them long to climb to fortune and fame with the albums ‘Bad Company’ , ‘Straight Shooter’, ‘Run With The Pack’, ‘Burnin’ Sky’ and ‘Desolation Angels’. After the 1982 album ‘Rough Diamonds’ the band took a break. Rodgers committed himself to The Firm (with Jimmy Page) and new singer Brian Howe came in. But that is a different story. It is strange that the band in its original line-up did not release a live record in those days. In 2006 there was a live CD released with recordings from 1976 and there were bootlegs as well, but not much else from the original band. This double CD changes that. The first CD is a show recorded in Houston, Texas in 1977 (to support the album ‘Burnin’ Sky’), the second is a show in 1979 in London, UK (‘Desolation Angels’ tour). If you have any feelings for that early line-up I am sure you will be pleased with this release. Both CD’s contain fifteen songs each and there is a lot of variety on them. Naturally, hits like ,,Shooting Star’’ and ,,Feel Like Makin’ Love’’ are featured on both CD’s, but that is it. In total (without counting the two drum solos) you got 26 different tracks. The performances are quite good as well. I have always been a huge fan of Paul Rodgers and the man delivers. He was your ultimate front man in those days. He had it all: a smooth presentation, charisma, looks and a superb voice, singing hard and heavy one minute, subtle as a flower the next and always with the blues in mind. Also great is Simon Kirke, mister steady behind the drum kit looking after the perfect beat which gives Rodgers and Ralphs the chance to do their thing. The CD booklet contains lots of nice pictures and a well written story about Bad Company. Finally, after such a long time, we do have a great double live CD to enjoy from one of the best bands ever to come out of England.